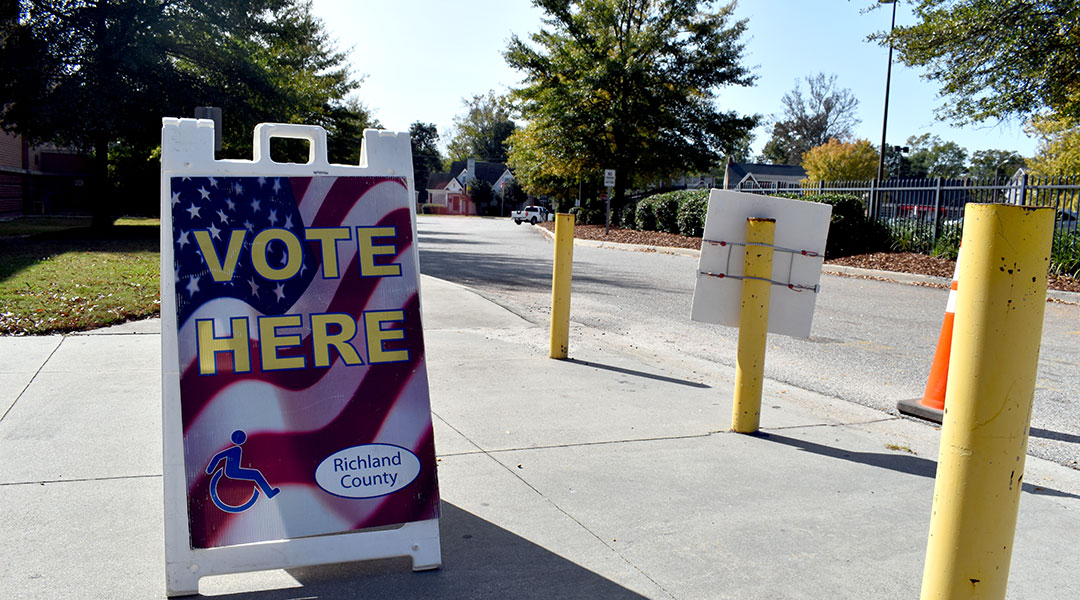 Irmo residents Keith and Sheryl Cloud voted Tuesday at Dutch Fork Middle School. Fully anticipating a line, the couple packed an emergency bag filled with things to keep them occupied. What they found instead was an empty line.

“It stresses me out to hear the hate mongering and so I am not sure if the ballots are going to slow down the results because people were still trying to bring in ballots,” Sheryl Cloud said. “I tried to vote yesterday, but, this was wonderful and I think the whole world has voted early, except for us. But this was pleasant.”

The Clouds both cast their ballot for President Trump and showed support for his U.S. Supreme Court nomination picks and getting the U.S. out of overseas wars as positive outcomes of his first term.

“I think it would be imaginable that he might have a couple more picks to come up in his next term. I like the fact that… others kept saying that he was going to get us into a war and all of that,” Keith Cloud said. “None of that has taken place. He loves America. He wants our troops home and not overseas and fighting these wars that mean nothing.”

Time for a change

“Because I really think we need a change. I think we have had a little bit of insanity and I think that we need to have something more stable,” Pugh said. “I am really concerned about our country not being stably led.”

While she hopes Biden wins the White House, she is unsure if he will win based on what the current polls are suggesting.

“You read about polls but you don’t know what to trust because the polls screwed us last time,” Pugh said. “I hope that Biden will win and I think Jamie will be a whole lot better for the state because our state has a lot of poor people and I think that he will understand them, or at least will be in line with people who are working for that concern of theirs.”

Unsure what Election Day will bring, but hopeful

Lanoddie Hagler said the Black Lives Matter movement is what motivated her to come out and vote at Ward 2 in Cayce on Tuesday.

“I feel like it’s a chance to speak out and I just want to get (President) Trump out of office,” said Hagler, 21.

Hagler said that she supports Democrat Jaime Harrison for U.S. Senate against incumbent Republican U.S. Sen. Lindsay Graham because he relates to people. She thinks he would be a good fit for the people of South Carolina.

“I think Jaime Harrison would be the best in office because he’s from South Carolina and he’s relatable to the black community,” said Hagler.

John Adams, candidate for Richland 1 school board, greeted voters at the polls on Tuesday.

“With coronavirus it’s very hard to get in front of people, so nobody wants to go anywhere or see anybody speak so it’s nice to interact with voters,” said Adams.

Adams voted early Tuesday and noticed the lines at Ward 24 have been busier than normal. However, he’s looking forward for what’s to come out of this election.

“With half of America’s voting population voting early, obviously it’s been a pretty good turnout, so it’s exciting for our country,” said Adams.

“I think it’s very important to vote, don’t be discouraged by the anticipation of waiting in line. It’s part of your right to do it and we need to make it an important priority in people’s lives.”

Older generation ready for a change

Tammy Ridgeway voted in the curbside area Tuesday in Ward 2 in Cayce. Ridgeway said it is too important of an election for people not to be voting.

Ridgeway’s husband came to vote earlier in the morning, but she said she would have stood in line to vote if the drive through was not an option.

“I am hoping we will get some change and some better leadership,” Ridgeway, 62, said. “Lindsey Graham needs to go home.”

Will Biden get lucky?

George Shingler, a 78-year-old Columbia resident, said he came out to vote in Ward 2 in Cayce because he wanted to exercise his freedom.

“I think Mr. Biden will be lucky if he wins, but maybe Trump in the end did himself in, we will see,” Shingler said.

Shingler said early Wednesday morning will be a good indication of what is to come.

Life goes on beyond politics

Rhodes Bailey, a Democratic candidate for House District 75, said he talked with Columbia residents about their life outside of politics.

“A lot of people are enthusiastic about voting, people have been real champs when they have waited in line,” said Bailey. “There is an energy in the air that I haven’t seen since 2008.”

Bailey said it was a good opportunity to reach people at Ward 24 amidst COVID-19.

Voting for “every American”

At Olympia Learning Center, 35 year-old Brandon Streett, who is unemployed because of the pandemic, also cast his ballot for both Vice President Biden and Democratic U.S. Senate candidate Jaime Harrision.

“His whole four years has been a travesty, but I think that his xenophobia really puts me off,” Streett said. “The idea that he thinks that only white Americans are privileged or deserve anything, that sort of disturbs me. I think that every American deserves equal opportunity.”

Streett said that U.S. Sen. Lindsay Graham’s flip flopping on issues and his close relationship to the President is one reason why he voted against the incumbent.

“Like in 2016 he hated Donald Trump. And now he’s his lapdog,” Streett said. “So it is sort of disturbing. It is disturbing to see how easily folded by anyone else’s criticism. He has been criticized by Donald Trump, so now he is going to be well, ‘I do whatever you say.’”

In Greenville County, Connie Weeks, 57, stood in line to vote at Taylors First Baptist Ministry Center for about 45 minutes on Election Day.

She has voted in every election, but she said voting felt different this time.

“Mainly because of it being such a big, big election [it felt] very important,” Weeks said. “It’s very important to me, for us to keep our president to have four more years. I’m a very proud American, and he makes sure that we keep our Constitution and all of our rights protected.”

Weeks described her hopes for the results as “the Red Wave.”

Finally, a personal reflection on the professionalism of poll workers

Poll workers at the Hamer Canaan precinct in Dillon County sometimes have to come to the aid of voters beyond checking them in and providing ballots.

This was the case at 7 a.m. on Election Day with my mother, Judy Hammond. She is diabetic, and her blood sugar dropped as we were walking into the precinct.

There were about 15 people in line, which is more than usual for this rural precinct. But busy poll workers quickly attended to my mother, bringing her a chair and some peanut butter crackers to snack on as she regained her strength.

We were able to vote and poll workers were kind enough to let us exit the building out the back door, which was closer to my car.

Despite my mother’s near fainting spell, no time was lost in anyone’s voting process. The poll workers had to respond quickly, and they did. They were calm and collected, which made for a smoother process for everyone in line.

It was clear that the local election staff and poll workers were well trained and determined to secure every voter’s fair chance to cast their ballot, even while attending to small emergencies along the way. 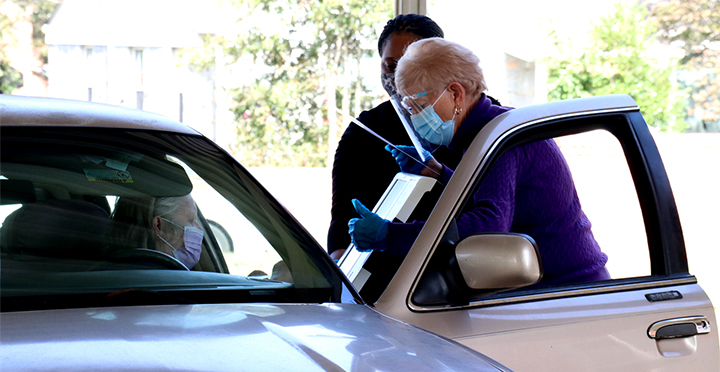 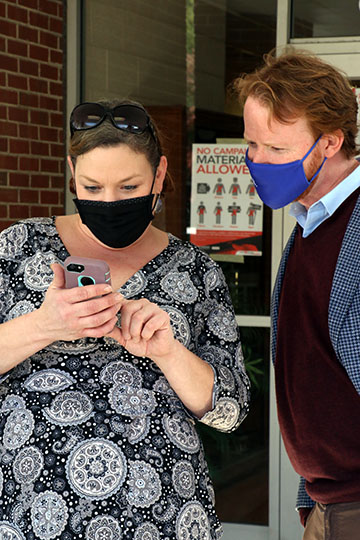 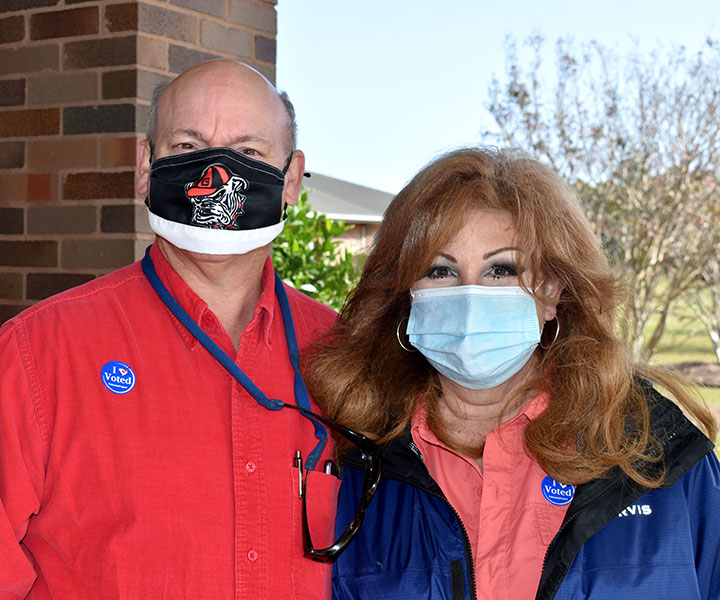 Keith and Sheryl Cloud of Irmo cast their ballots with ease Tuesday. In previous election years, they said they have waited over six hours to vote. Photo credit: Samantha Winn. 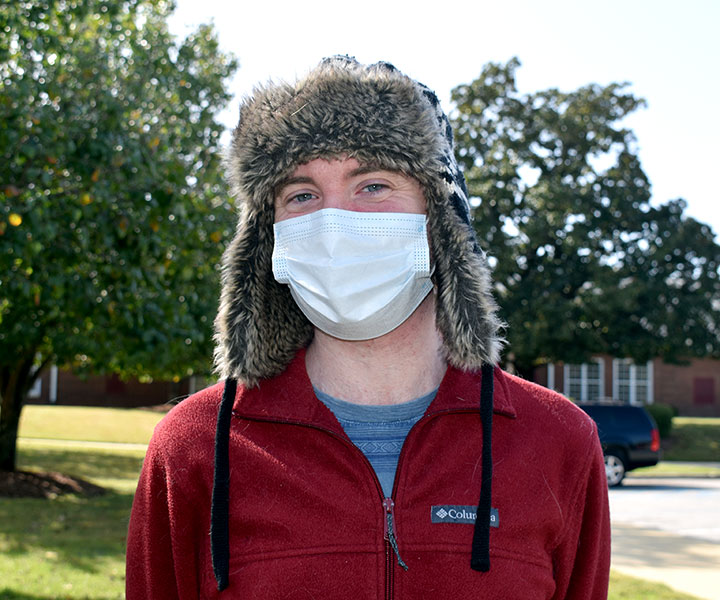 Brandon Streett believes it will take several weeks for all of the ballots to be counted from the election. Photo Credit: Samantha Winn 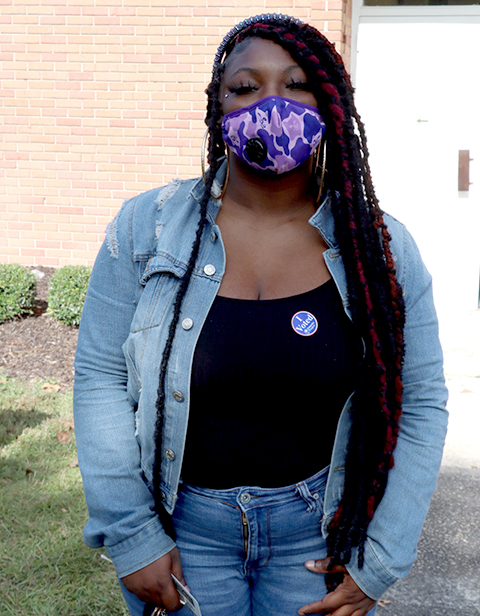 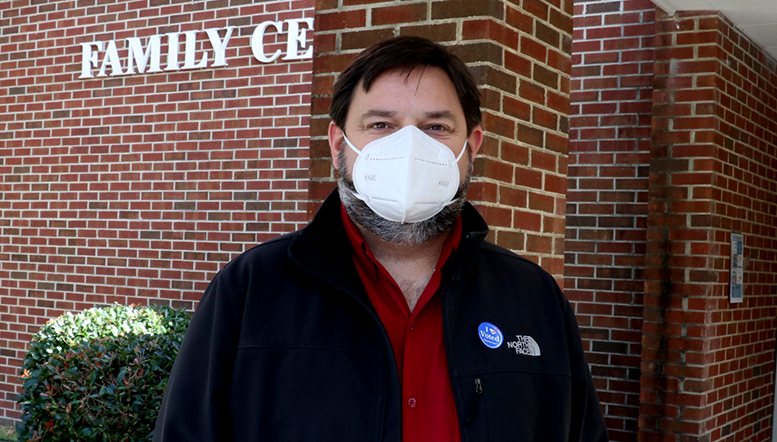