Fair food but no Ferris wheel at drive-through State Fair 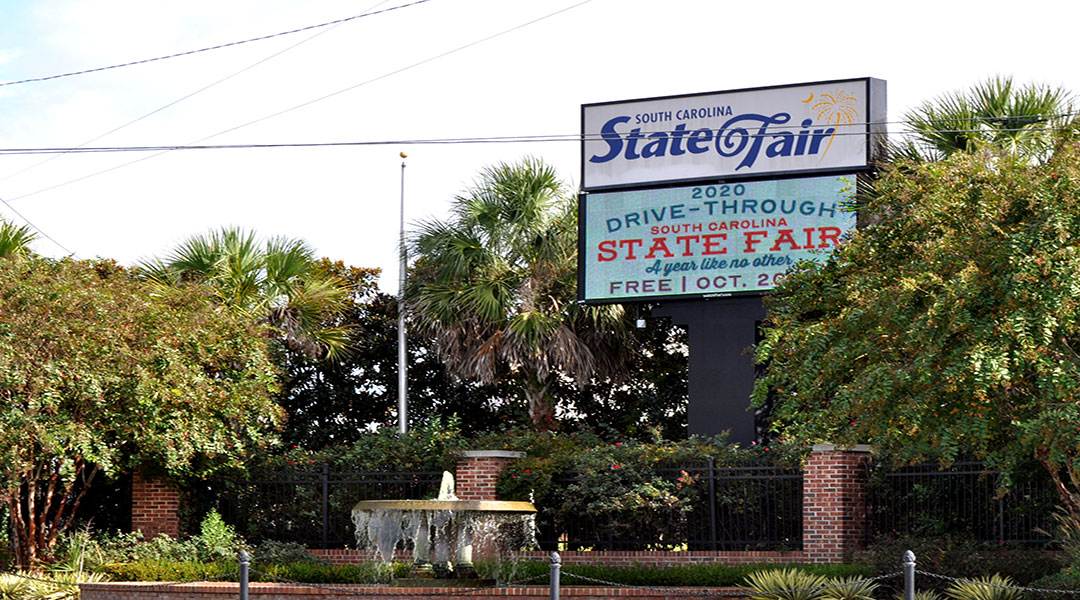 The South Carolina State Fair will operate as a drive through fair Oct. 20-21 and will follow COVID-19 guidelines and rules.

The South Carolina State Fair is coming to town without the usual attractions — no fair rides, no live entertainment and no carnival prizes.

The decision is a blow for South Carolinian’s who have made it a fall tradition to trek to the State Fairgrounds for the Ferris wheel, stuffed animal prizes and funnel cakes.

“The whole staff studied that scenario at length, and we just didn’t feel comfortable that we could follow all the guidelines within all of the CDC guidelines and the Occupational Safety and Health Administration guidelines,” said Kathy Allen, S.C. State Fair human resources and marketing director.

Instead of the normal 12-day run, the fair will be in town for only two days this year on a much smaller scale. Art displays, flowers, crafts and other exhibits will replace fair rides, live entertainment and carnival games.

“Our drive-through fair part is just that. We hope to give everyone a snippet of the things they would see in a regular year when they would come to the fair,” said Smith. “In a normal year, your South Carolina State Fair has competitive exhibitors from every county throughout the state, so that’s why we feel it’s very important to bring that aspect back.”

There is no question the drive-through fair is likely to draw fewer visitors. Nancy Smith, general manager for S.C. State Fair, and Kathy Allen said the drive-through aspect might impact the number of visitors this year.

“I bet some real fair-lovers are going to drive that far, but I would imagine that people aren’t going to want to drive five hours to drive through the fairgrounds,” said Allen.

“It’s not going to be your fair as you’ve known it, but it will be a drive-thru scenario and there’s no doubt that will be impacted,” said Smith. “The 12-day run of the fair, we have approximately 500,000 (visitors), but yes that will definitely affect it.”

One of the more popular competitive exhibits at the State Fair includes student art, fine art and home-grown produce with pumpkins, watermelons, sugarcane and Christmas trees. Smith said they won’t have competitive exhibits this year for safety reasons, but they will have items on display.

“People have not had an opportunity to exhibit, but the one good thing is that sometimes you know you can’t wait until the last minute to start growing that giant pumpkin or watermelon,” Smith said. “Some people had already started (growing), and we’re just praying for the pumpkin that it’s going to last.” Said Smith. “While they were not able to be judged, we’ll have the good fortune of being able to view that during the drive-through fair this year.”

Fair goers will also get a glimpse of the memories from last year’s circus and the most important part of the fair — agriculture.

“The fair’s roots are in agriculture, so we’re always striving in lots of ways to keep that important aspect of our industry alive,” Smith said.

“One of the things people really like to see when they come to the fair would be our livestock,” Smith said. “We are thankful and pleased to be partnered with the Future Farmers of America and 4-H chapters throughout South Carolina, and they’re helping to bring some beef cattle, dairy cattle, swine and meat goats to the fair this year.”

Another fan favorite of the S.C. State Fair is the food. Fries, candy apples, turkey legs, funnel cakes and more will still be present at the drive-through fair.

Some University of South Carolina students are not sure if they’ll go to the drive-through fair this year. First-year experimental psychology student Nailah Hicks said it may not be worth it.

“I might, but I don’t think it’s really worth it at this point,” Hicks said. “It’s going to be very packed because it’s only like four days this year, but I might get some food.” Hicks said her favorite food option at the fair is funnel cake. Other USC students who are still on the fence said they’re mostly looking forward to the food too. 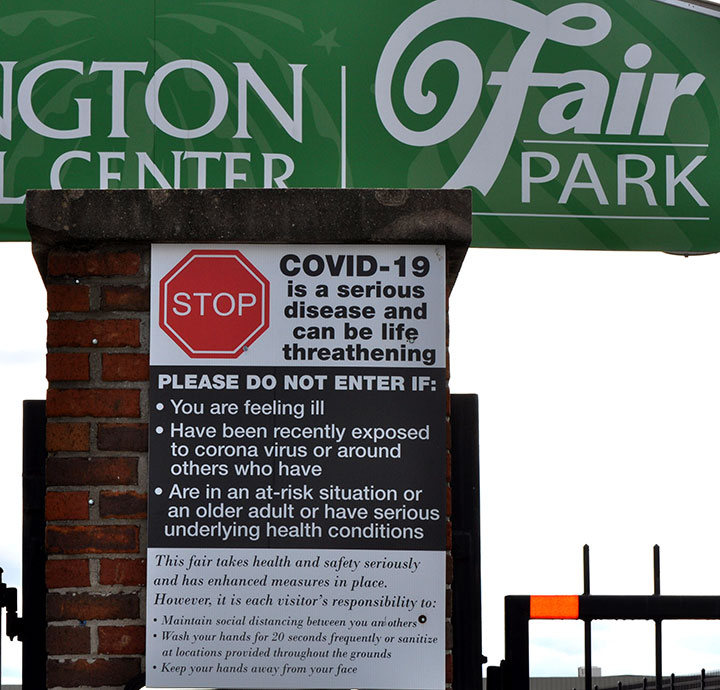 The signage at a gate entrance reminds visitors that the fair is following COVID-19 guidelines set by the South Carolina Center for Disease and Control (CDC). 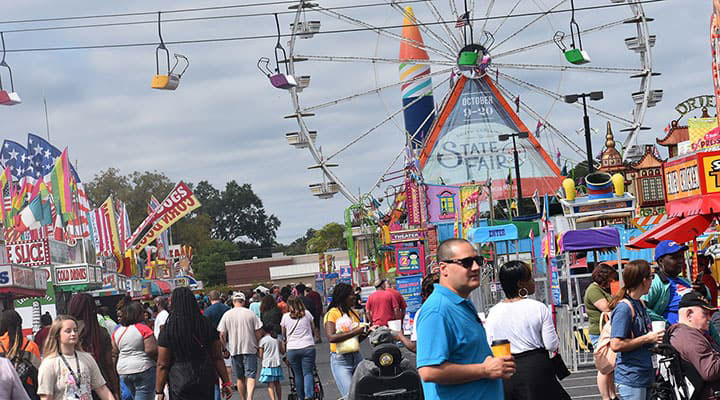 This year, fair-goers will not be able to enjoy the State Fair like they did in October of 2019 before the outbreak occurred. This year, it’ll be very different. 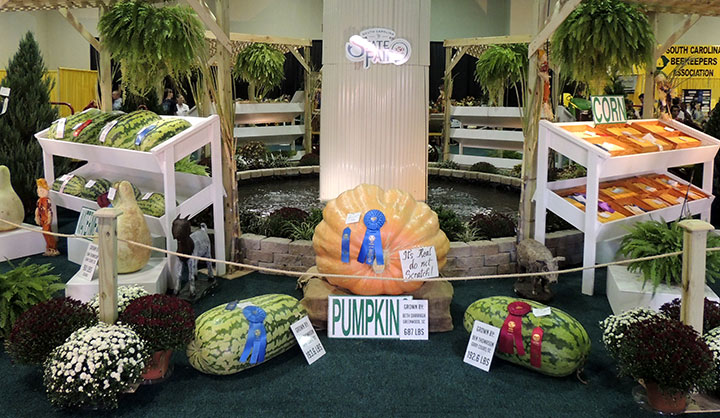 The agricultural and livestock competitive exhibits at the State Fair are normally a big part of the fair but this year you will only get a sampling. Photo By: Tim Wilson 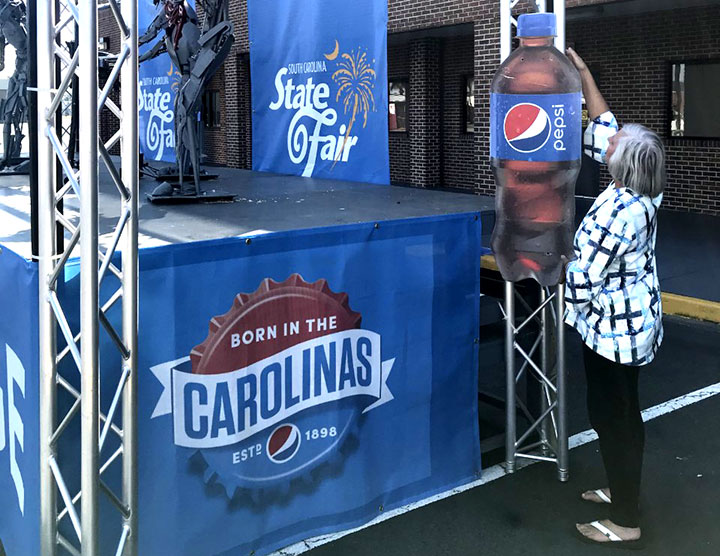 State Fair general manager Nancy Smith has been preparing for the drive-thru fair set to open Oct. 20-21. The Pepsi Place stage will feature a metal sculpture by artist Thomas Humphries. 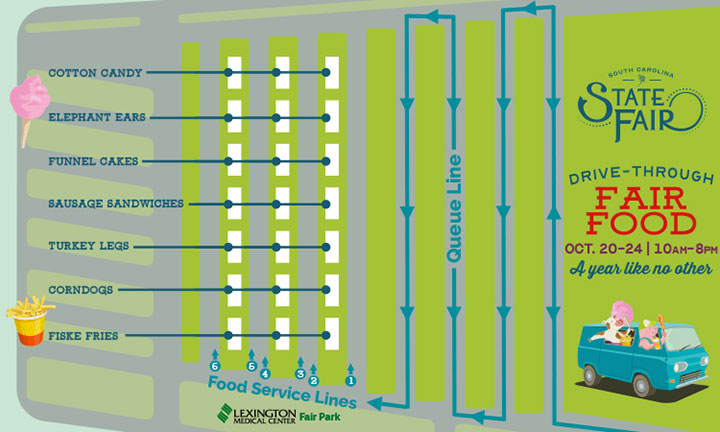 The map will direct visitors to enter through gate six for fair food. Each line will have the same options and operate as a drive-thru. 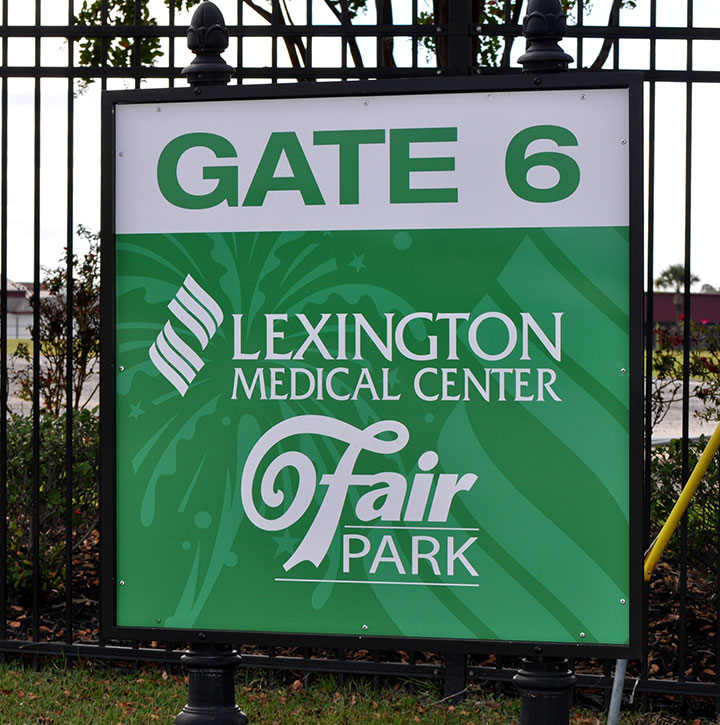 Entrance gate number six at the fairgrounds will direct visitors to food lines. Visitors will exit through gate 10.