Thanksgiving falls late this year on Nov. 28, and that means six fewer days for shoppers to purchase gifts between Thanksgiving and Christmas.

The tighter schedule has created a scramble for the holiday shoppers and retailers alike.

Columbia store owner, Sonia Ingram, says the pressure is on to get those holidays sales.

“This is when every retailer typically makes all of their profit,” Ingram said. “So you’re running for 10 months out of the year to make it through to the holiday season, so having people come in and shop during the holiday season is really critical to especially small businesses but to every retail business because its when you make all of your money.”

With one week less, it feels like one week less of money, but, University of South Carolina Professor Karen Edwards says business actually shouldn’t be worried.

“When there is more time to shop between thanksgiving and Christmas, we lose our interest at a faster pace in shopping than if there is less time,” she said. “It looks like this year is going to be okay for retailers, which is also okay for shoppers.”

In fact, the National Retail Federation estimated retail sales in November and December will grow as much as 4% compared to last year.

Consumers say they will spend an average of $1,047.83 this holiday season.

The National Retail Federation expects the total to be around $730 billion this holiday season.

“That’s a really healthy increase, and we’ll be happy with that particularly with the shortened time and all of the other issues, more and more people shopping online which is great for retailing as well.” Edwards said.

For small business owners like Ingram, this is good news. “I’ve been in retail for a very long time, and I really think that when there is a shorter period between thanksgiving and Christmas that people have a sense of urgency and it seems to get everybody excited, and the sales, I think, seem to busier and better.” 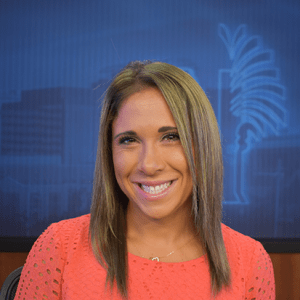 Lindsey Thorpe is an aspiring broadcast journalist from Boston, Massachusetts, with a passion for storytelling and making a difference in the world. Thorpe has camera experience on and off campus with student government, SGTV, WACHFOX news and as an ambassador for USC. She has reported on mental health issues, self-defense and stories that empower people around the world.