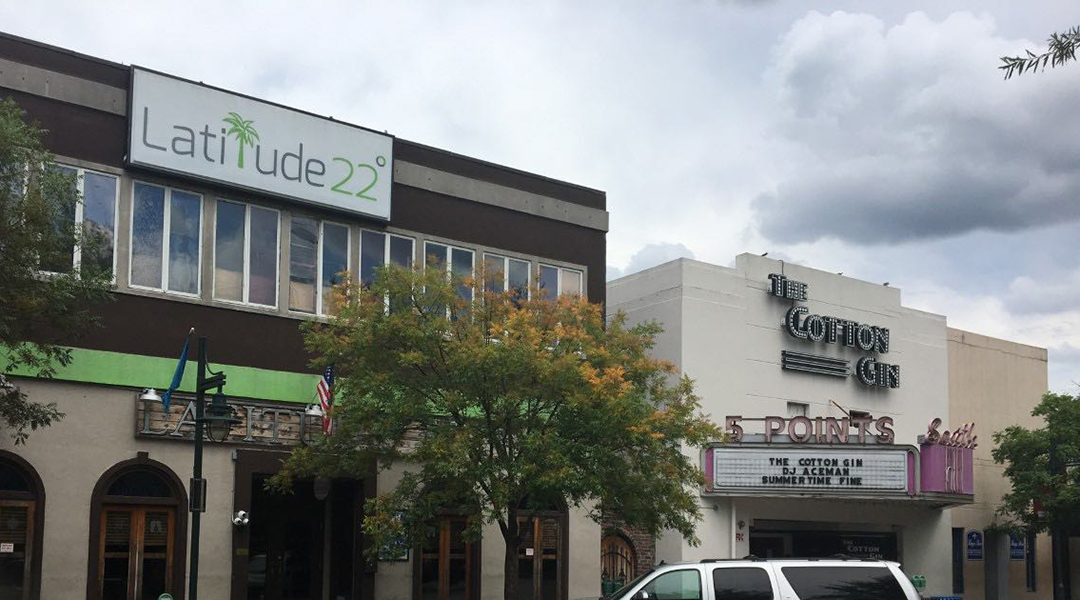 Five Points Latitude 22 and Cotton Gin are within feet of each other, with Pinch and Lucky’s of Columbia nearby. 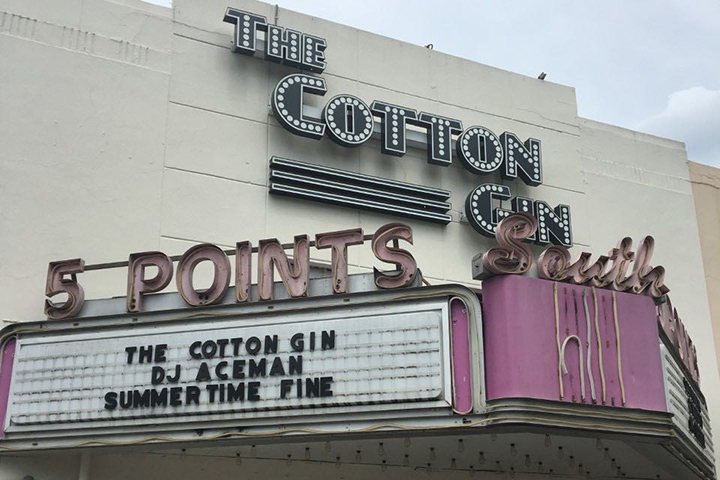 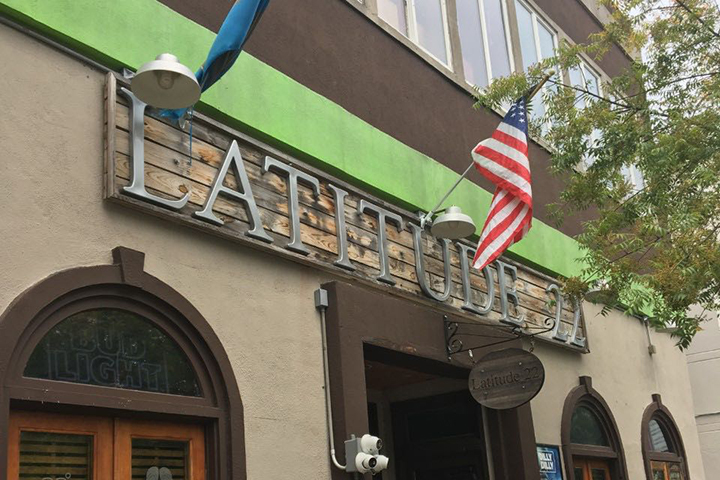 Latitude 22 on Harden Street, next-door to Cotton Gin, Pinch and Lucky’s of Columbia. 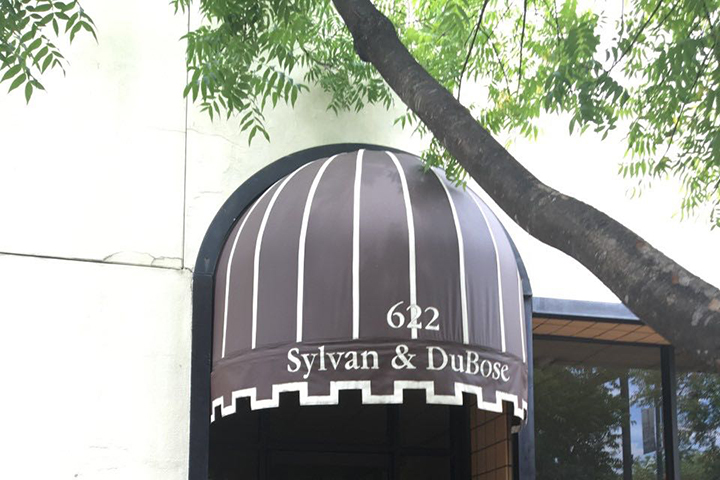 A walk down Harden Street in Columbia’s Five Points district reveals a row of bars separated by not much more than a few feet.

South Carolina attorney, Dick Harpootlian, is seeking to reduce the number of bars –even if it means shutting down some businesses.

Harpootlian represents Bruce DuBose, the owner of Sylvan and DuBose Jewelers in his lawsuit against the Five Points bars Pinch, Lucky’s of Columbia, Latitude 22 and Cotton Gin and the City of Columbia.

Harpootlian contends in the suit that the operation of these bars hurts DuBose’s business at 622 Harden St. and does not abide by city and state regulations regarding spacing and services offered.

Section 6-6-1610 of the Alcoholic Beverage Control Act states that, except on Sunday, an establishment can sell liquor by the drink between the hours of 10 a.m. and 2 a.m. the next morning if the establishment is “bona fide engaged primarily and substantially in the preparation and serving of meals.”

“All of these establishments predominantly serve alcoholic beverages … and are assembled in unlawful concentration because none appear to be primarily engaged in preparing, offering, and serving meals,” wrote Harpootlian in the lawsuit.

City of Columbia ordinance §17-269 states that “drinking places shall not be located closer than 400 feet to any other lot used as a drinking place.”

In the lawsuit, Harpootlian writes that “currently, four drinking places are operating upon DuBose’s doorstep in contravention of the zoning laws, compromising a cluster with less than 100 feet of separation … the City of Columbia systemically disregards and fails to enforce its own laws,” and that “the systemic failure of the City to properly assess and enforce [the ordinance] has directly facilitated the onslaught of drinking places to take root within Five Points.”

According to Harpootlian, Pinch, Latitude 22 and Lucky’s of Columbia are all within 40 feet of each other, with the Cotton Gin just 90 feet away. He says these bars tend to attract crowds of young college students and mostly promote alcohol, rather than food, on their social media accounts.

Harpootlian says Five Points used to have more restaurants and retail shops, so Sylvan and DuBose Jewelers used to get a lot of walk-in business from people who were eating or shopping in the area. Now that the street is lined with bars that don’t open until 10 p.m., Harpootlian says DuBose gets less business.

Harpootlian’s plaintiff is “seeking declaratory and injunctive relief,” which essentially means DuBose would like to see the businesses he is suing cease operating in their current manner.

Harpootlian says he is not only concerned about bars being a nuisance to neighbors and businesses,but also  for USC students’ academic lives.

“Shouldn’t they [students] be going to class? Is college just a social phenomenon now? Or is it some academic requirement?” Harpootlian said referring to the influx of college students who flock to Five Points bars and drink until the early morning.

Joe McCulloch, a South Carolina lawyer who represents, in his words, “several restaurants and establishments” in Five Points, some of which DuBose is suing, says that when Harpootlian filed his suit against the Five Points bars and the City of Columbia, he “filed it on the basis that there were several places that were drinking places, and that they were within 400 feet of each other and could not therefore exist.”

McCulloch has filed a motion to have the case dismissed.

In the motion, he states:

The petitioner lacks standing to bring this action,

“The reason that they [the lawsuit] must be dismissed is [because] Mr. DuBose, the business person in Five Points, who is Mr. Harpootlian’s plaintiff, does not have specific injury … he closes at six o’clock, and the very businesses that he has sued don’t open until six o’clock or ten o’clock or midnight,” said McCulloch.

Standing, the first point in McCulloch’s reasons for which the suit should be dismissed, means that a person who wants to sue has to have a particular injury specific to him.

McCulloch said that the bars he represents try to be the best public citizens and neighbors possible, and that they try to obey the law and serve customers responsibly.

“They’re trying to give back to the community through taxes, and they’re finding themselves demonized and sued, when all they’re really trying to do is get out of bed and go make a living,” said McCulloch.

He also said that authority over laws regarding alcohol sits with the state and not individual municipalities, like the city of Columbia; therefore, the ordinance the city put in place is “unlawful.” He believes the city has invaded the state’s control over alcohol laws, as he believes the authority lies with the general assembly and not the city council.

McCulloch added that if the city’s ordinance is upheld, the effects would go much farther than just shutting down or moving some Five Points bars, noting that city and state revenues could be affected as well.

“The city, the state are suddenly making less income from sales taxes. People are losing their jobs. Land owners are suddenly not able to get their property rented,” McCulloch said regarding what could happen if the ordinance isenforced.

He said if the city started to close down drinking establishments in Five Points, college students may have more house parties, and that they will only disperse rather than stop consuming alcohol. He said it is easier to police a mile-long strip of bars than it is to police drunk college students spread out all over the city.

“Life marches on. The people who would like to see the sleepy little Five Points Village that existed in 1970, I’m sad to say they’re going to have to move … to find that sleepy little corner, because it will never come back to Five Points any more than Main Street will ever return to the way it was in the ‘70’s … any more than Forest Drive will be less busy … It’s called progress, and it’s called reality,” said McCulloch.

McCulloch said part of the root of the college drinking culture in Five Points is due to the University of South Carolina’s increasing enrollment rates. This in turn increases the volume of college-age people drinking into the early morning in Five Points.

Five Points bar and restaurant owners and managers in Five Points declined to comment to avoid media attention while the case is still open.

The City of Columbia declined to comment because it “does not respond to inquiries regarding pending litigation.”

Harpootlian was successful in his efforts to shut down The Roost, formerly Pour House, earlier this year when Judge Deborah Durden ruled that its temporary liquor license wouldn’t be extended, as it did not offer enough food or have an adequate kitchen.

He says he expects a ruling on the case from Judge Durden in early August.