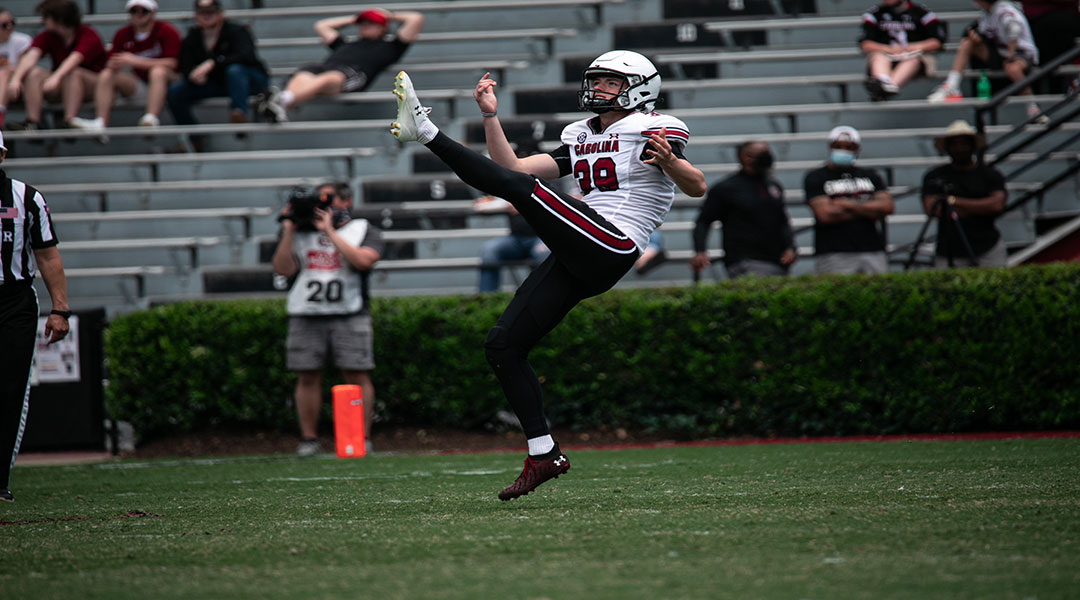 Sophomore punter Kai Kroeger was named to the 2021 preseason Ray Guy Award watchlist. The Ray Guy Award is awarded to the best punter in the country. Photo courtesy of SEC Media Portal

Gamecock punters have been a beacon of consistency for a program that has undergone substantial change, from a new head coach to the departure of players who decided to go pro or transfer out of the program.

Starting with Joseph Charlton in 2017 and running through this season’s performance by Kai Kroeger, the Gamecocks have built a solid reputation of strong punting.

Kroeger, a sophomore punter from Lake Forest, Illinois, enjoyed a fantastic freshman year that earned him a spot on the SEC Coaches All-Freshman team.

The three-star recruit out of high school punted in all 10 games last season and averaged 43.3 yards per punt on his 22 punts during his freshman year. This put Kroeger in the middle of the pack out of all the punters in the nation.  The best punter in the nation, Pressley Harvin III from Georgia Tech, averaged 48 yards per punt.

This year, Kroeger has punted in all five games this season and is averaging 41.5 yards per punt on 22 punts.

This far into the season, Kroeger would give himself a decent grade on his performance.

“Overall, I give myself probably a B, I’d say,” Kroeger said during a press conference last week. “I’ve been proud of myself for being able to get the ball directionally where we’ve wanted it. But something definitely that I’ve been trying to work on has been hang times, and also just being a leader, being more vocal in terms of whether it’s the punt unit, getting everyone set or with field goal especially. Especially since I’m making calls and getting guys moving around.”

New special teams coordinator Pete Lembo believes that Kroeger is getting better due to his great work ethic.

“He’s a young guy, but he is a very hard worker and committed to getting better,” Lembo said in a spring press conference.

The player who set the bar high for Kroeger was Charlton, now playing in the NFL with the Carolina Panthers. Charlton, who punted for the Gamecocks from 2015-2019, won the Jim Carlen Award for the most valuable player for special teams from 2017-2019.

Charlton, a Columbia native, owns the school record for career punting average of 45.5 yards per punt.

“He’s a very valuable guy,” said Will Muschamp in a 2019 press conference. “When we first got here, he wasn’t the most charming individual in the world. You can ask him, and he’ll agree. He’s one of my favorite players on the team. He’s a great competitor; he really competes hard at punting and improving himself.”

Muschamp was right about the “tremendous future” that Charlton has. In his rookie season with the Carolina Panthers, Charlton punted in all 16 games and set the fourth best single-season record for the Panthers, with an average of 40.8 yards per punt on 45 punts.

Charlton is grateful for the chance to be able to play for the Panthers.

“I grew up a Panther fan,” Charlton said. “I’m from Columbia, South Carolina. I stayed home and played for USC. It’s an honor to get the chance to play here.”

The recent success should continue under the new regime considering special teams runs in the Beamer family. Frank Beamer, Shane’s father, was known for always having good special teams during his time at Virginia Tech. 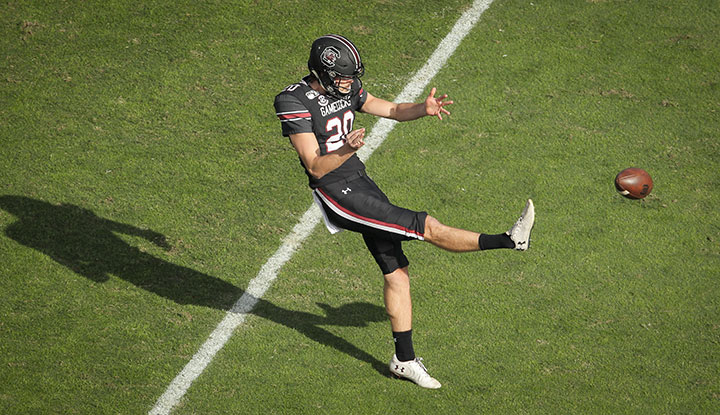 Joseph Charlton became the starting punter in the 2017 football season and would not relinquish his starting duties until he graduated and went pro after the 2019 season. Photo courtesy of University of South Carolina Athletics 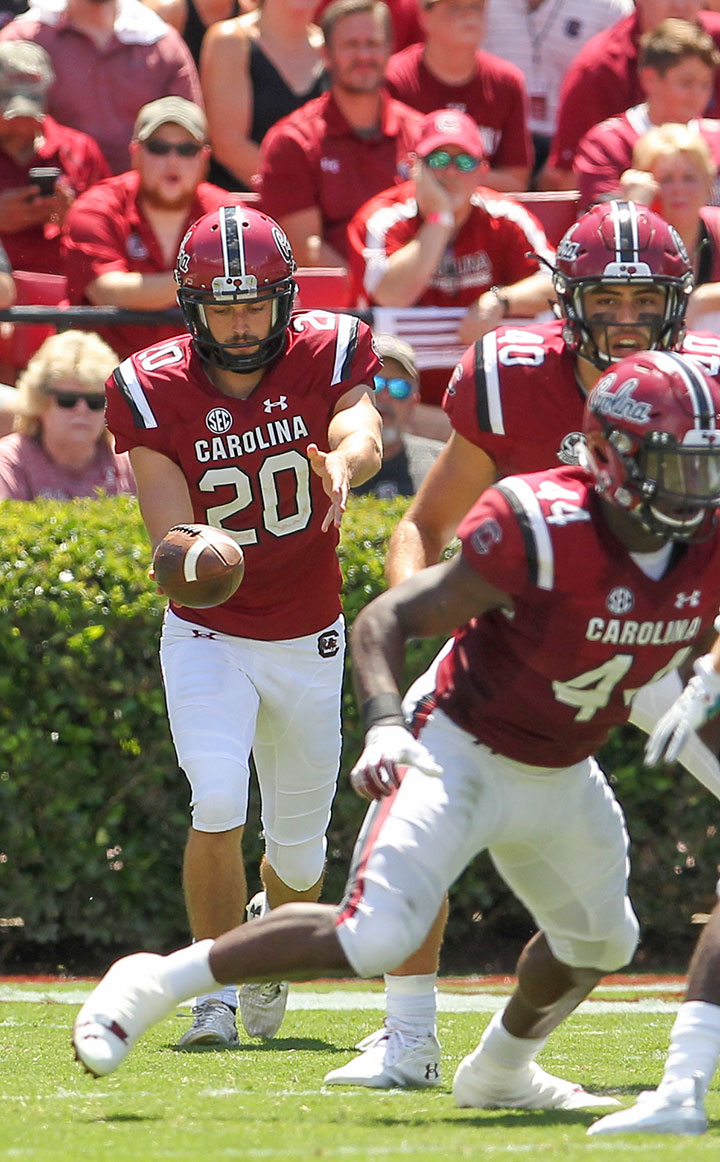 Joseph Charlton averaged 47.7 yards per punt average in the 2019 football season, which helped him set the career school record for yards per punt. Photo courtesy of South Carolina Athletics 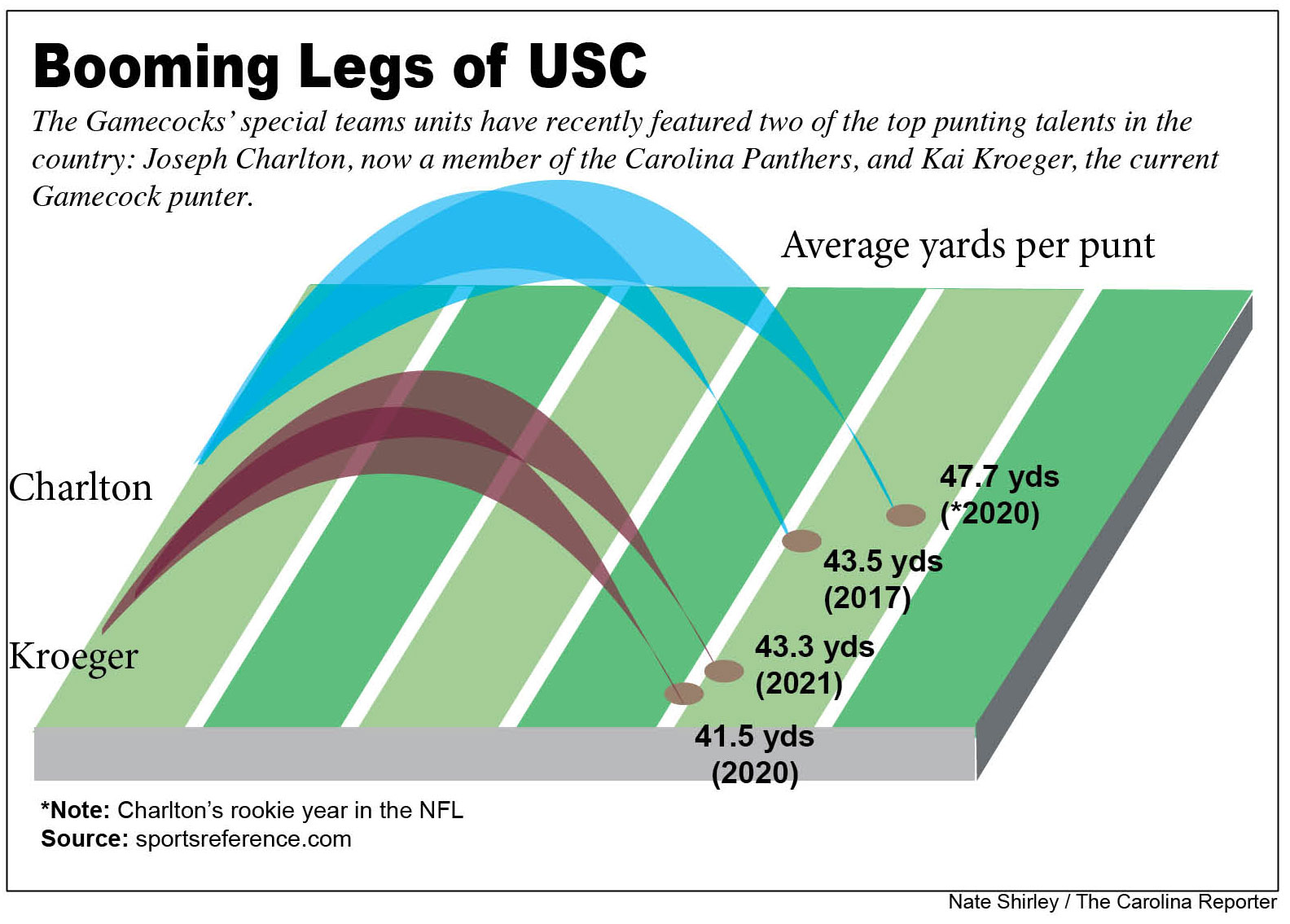