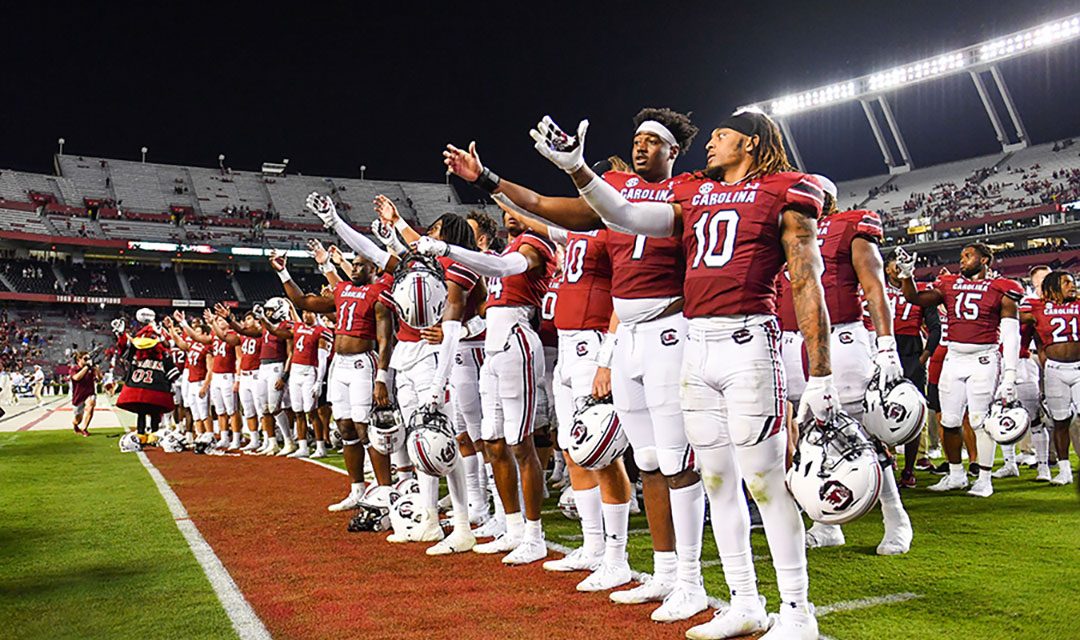 USC Football players sing Forever to Thee, the UofSC alma mater, after last week’s game versus Kentucky. Singing the alma mater is a tradition before every game. Photos courtesy of SEC Media Portal.

South Carolina plays host to Troy for an afternoon matchup at Williams-Brice Stadium Saturday, and the Trojan defense will present one of the biggest challenges headed into the game, according to Gamecocks head coach Shane Beamer.

Troy enters Columbia with a stout defense ranked fifth nationally in total team defense and 24th in total team rush defense. Beamer took notice of this program at a press conference on Tuesday, calling the defensive unit “one of the hardest-playing defenses I have ever seen.”

Junior Trojan linebacker Martial Carlton leads the defense with 32 total tackles and should play a major role in attempting to stop the Gamecock ground game on Saturday.

Freshman running back JuJu McDowell called the Trojan defense “aggressive” and “ball swarming,” noting that they typically have multiple tacklers around the ball carrier.

This defensive front will present a challenge for South Carolina’s ground game, which has not been playing up to standard.

The coaching staff sets a weekly yards-per-carry goal, and Beamer said, “we’re not hitting that.” The Gamecocks average 3.38 yards per carry on the season and rank 101st in the country in total rushing offense.

Offensive Coordinator Marcus Satterfield said, “we have the personnel.” The running back room features four backs with over 100 yards so far this season: Zaquandre White, JuJu McDowell, Kevin Harris and Marshawn Lloyd.

While the group’s talent is undeniable, Satterfield is still trying to find the right combination to make this rushing offense efficient.

“We keep addressing it,” Satterfield said, “and eventually it’s going to get going. We’ve got really good running backs.”

Beamer said he believes in the offensive system as a whole. “It’s just the details of the play” that are holding them back.

“Our main focus at this point is just execution,” McDowell said.

The offensive line has struggled to find a consistent group as well. The team has yet to find a solid starting line, rotating several positions throughout the season. Beamer and Satterfield both are looking for a solid core to rely on for run blocking and pass protection.

“I would like to see some guys step up and solidify themselves,” Beamer said.

While they have not played as well as hoped, Beamer said he is still confident in his rushing offense and team as a whole.

“We as a team see how close we are,” said Beamer. “We as a team understand that we have a lot to clean up, players and coaches.” 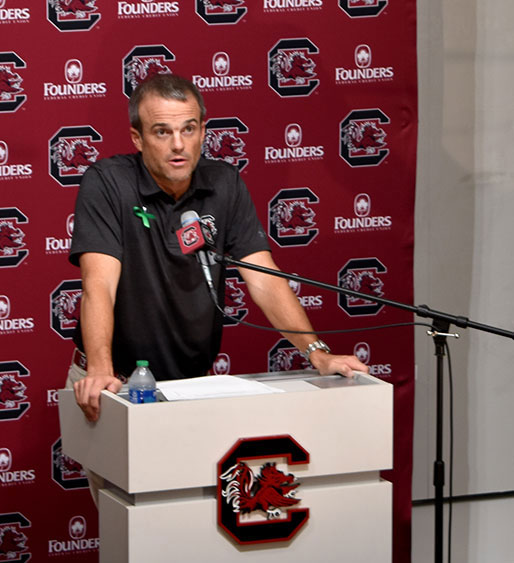 Head football coach Shane Beamer wears a green ribbon while speaking at Tuesday’s press conference. The ribbon is in support of mental health awareness week, which will run Oct. 3-9. Photo by Nick Sullivan 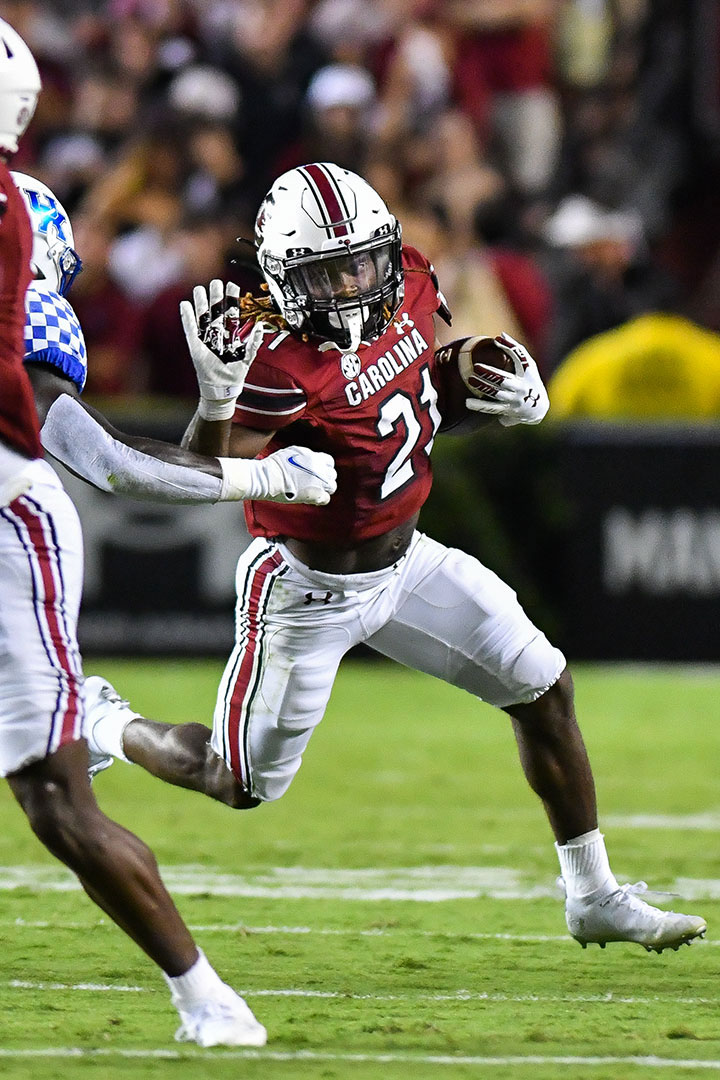 Running back Juju McDowell attempts to evade a Kentucky defender with a stiffarm. McDowell currently has the second most rushing yards in a deep Gamecock running back room. 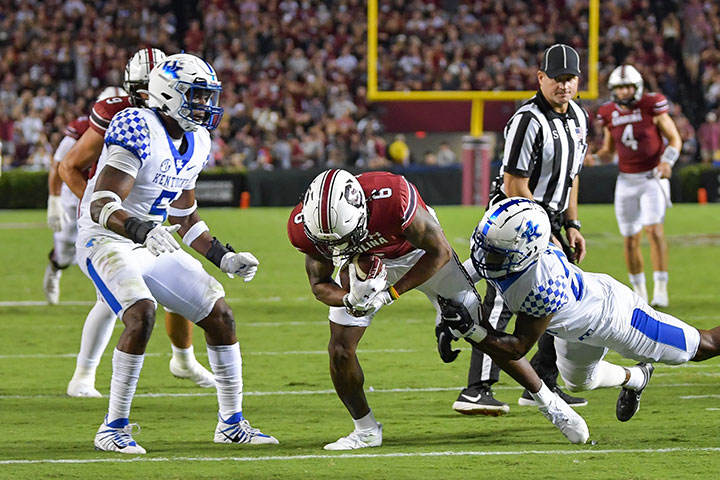 Wide receiver Josh Vann attempts to escape a pair of Kentucky tacklers. Vann ended the night with 3 catches for 16 yards. 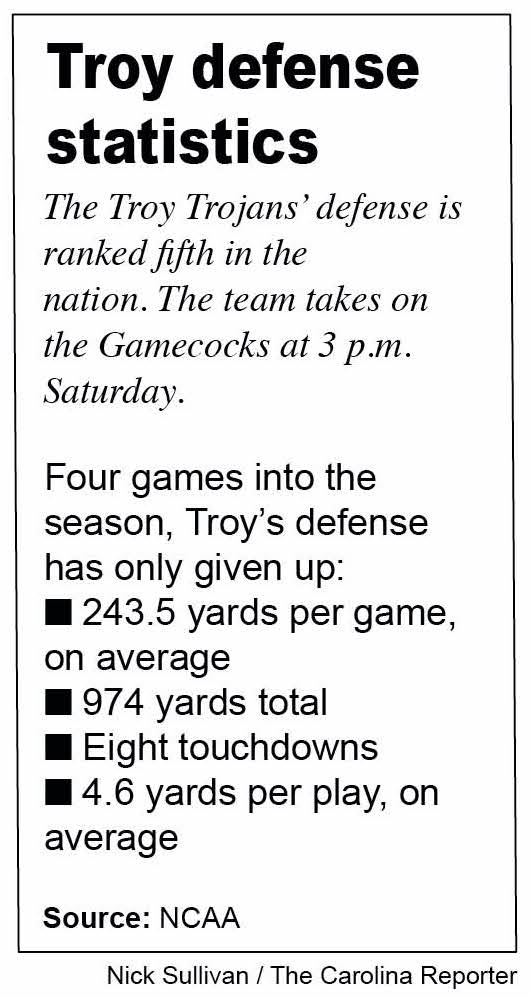