Gamecocks having fun as they get set for SEC play 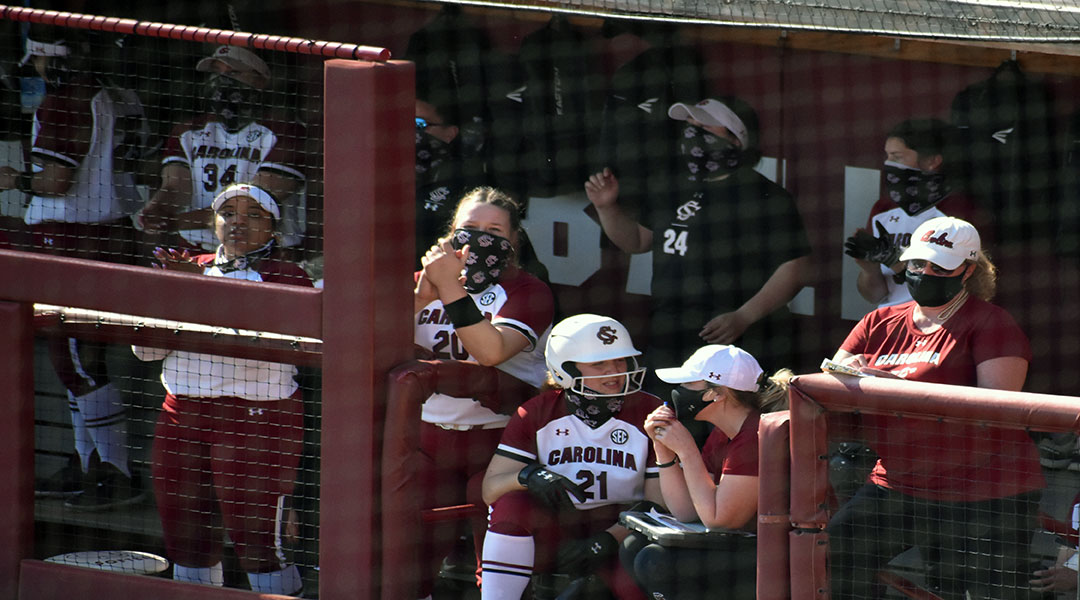 South Carolina Softball is 13-3 this season after non-conference play. Photos by Brandon Alter.

South Carolina softball is having fun.

It seems like the Gamecocks, who are now close to full health after returning senior pitcher Cayla Drotar made her season debut in a 9-1 win over Georgia Southern on Wednesday, seem to be just hitting their stride. There are some noticeable trends from the non-conference schedule that the Garnet and Black will need to continue for a successful SEC schedule.

Can it really be that simple?  For Prebble, the answer is yes.

“I try not to over complicate it,” Prebble said. “That’s my job. Just hit it hard.”

Prebble had a fantastic start to the season, but then was injured on Feb. 27. She came back five games later but didn’t miss a beat. In the two games since returning from injury, she has two home runs and seven RBIs. Overall, she is hitting .424 with three home runs.

It isn’t just Prebble. Kassidy Krupit has also demonstrated the power she brings to the plate. She has five home runs and a team-high 30 RBI.

It isn’t just the big hit the Gamecocks are getting, they’re also getting the timely hits. With 10 SEC teams ranked in the top-25, it may come down to execution and timely hitting to win a series. On Wednesday night, that’s exactly what South Carolina got. With runners on base, the Garnet and Black hit 6-16 (5-8 with runners in scoring position), and were 7-13 with two outs in an inning. Eight of their nine RBIs came with two outs.

“I like that ‘never say die’ attitude from our offense,” Gamecock head coach Beverly Smith said.

The three-headed monster is back, and with more heads

In 2018, the Gamecocks rode the arms of Drotar, Kelsey Oh and Dixie Raley to their first trip to Super Regionals in over a decade. Now, with Drotar and Oh leading the way as upperclassmen, South Carolina’s pitching arsenal is once again a force to be reckoned with. In the final tune-up game prior to the start of conference play, the pair dominated.

Oh went two innings, allowing just one hit. She threw a total of 11 pitches, nine for strikes. Drotar went three innings in her season debut allowing no hits and striking out five.

“I think one of the strengths of this team is our staff, not just Kelsey and KK,” Smith said. “But just the arms that we have ready to go. I’m excited about the depth we have in the circle this year.”

Thanks in large part to the freshman class, Smith’s team has an element that they’ve never really had before; deadly speed on the base paths. The team is 23-25 on steals, led by freshman Aaliyah White’s six.

“It’s something we’ve spent some time on,” Smith said. “We recognize that we have more team speed than we’ve had in the past and we want to use that to our advantage.”

Kenzi Maguire and Mackenzie Boesel are the drivers of the team on offense and in the field. Boesel has just one error on the year and has helped turn six double plays. Maguire has three errors and has helped turn four double plays. Offensively, each is hitting above .400, with Boesel with a team-high .479. They have combined for 23 free bases through walks and hit by pitches, and have combined for 46 runs scored.

With a challenging non-conference schedule, Smith has prepared her team for the ultra-tough SEC.

“We’re ready for conference play,” Smith said. “We have a tremendous amount of confidence based on our non-conference schedule. They have a lot of trust in each other in the dugout. I think we’ve won games in a lot of different ways.”

Senior Kelsey Oh is 1-2 this season with a 2.43 ERA in seven appearances in the circle. 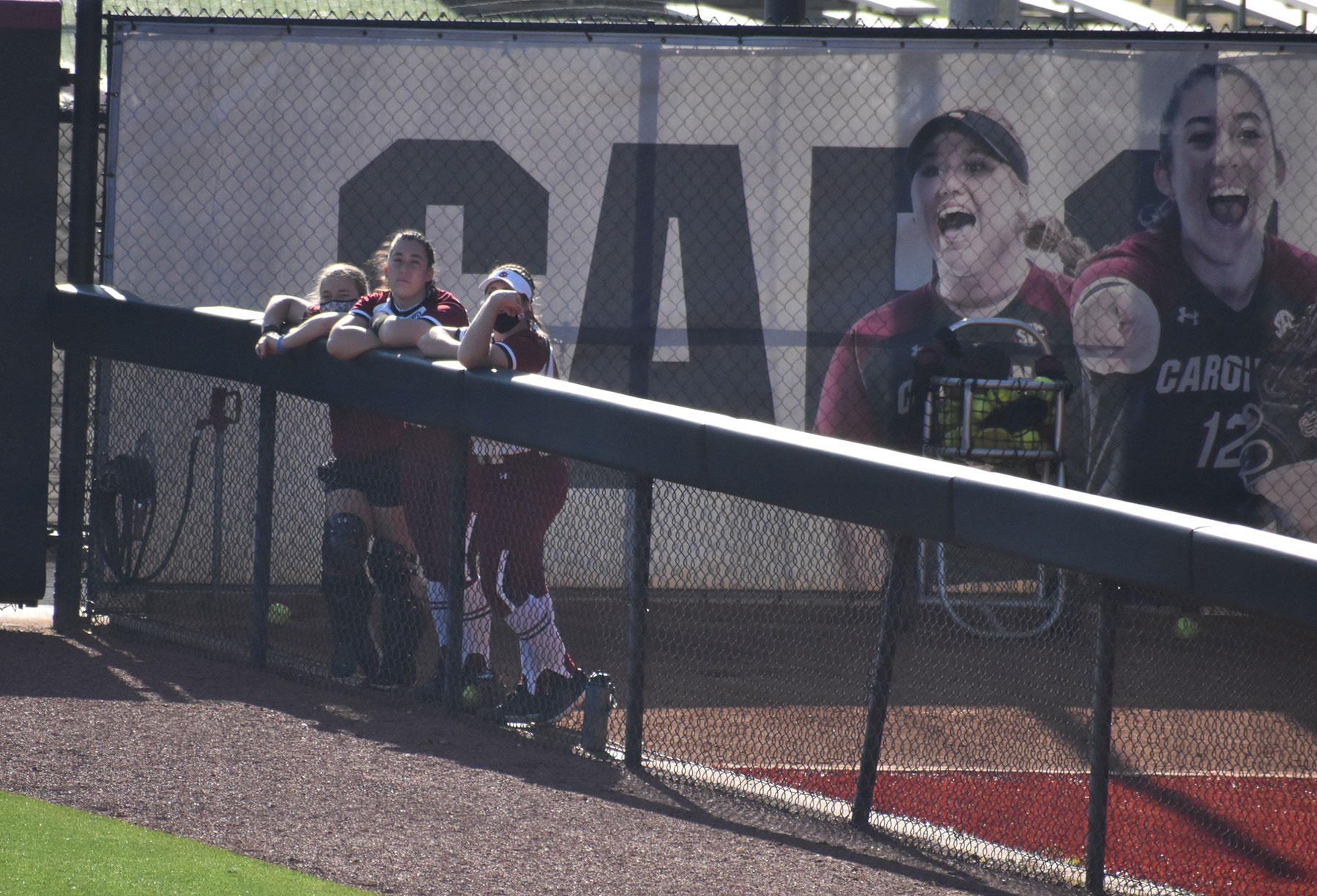 South Carolina’s pitching staff has a 2.03 ERA this season. 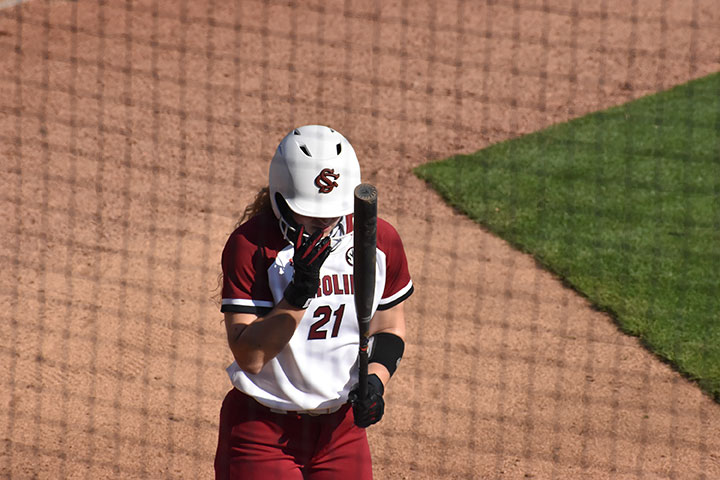 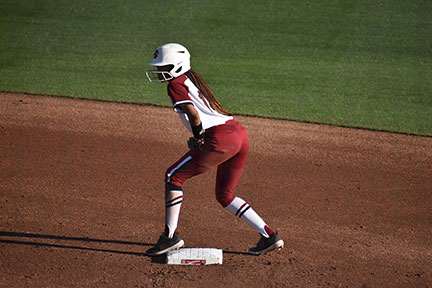 Freshman outfielder Aaliyah White is six-for-six on stolen bases so far this season.