Glassblower turns over a new bead 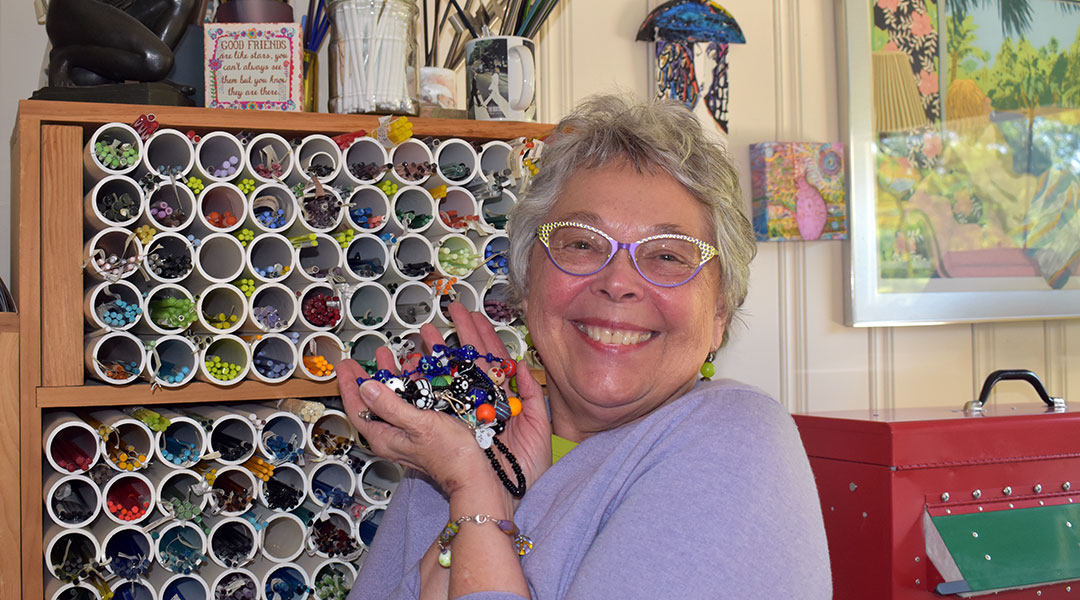 Susan F. Robertson has more than 30 years of glassblowing experience under her belt, and in recent years, has turned to making glass beaded jewelry. Photos by Carson Peaden.

Susan F. Robertson was in her final college semester as an accounting student when she discovered glass.

She was walking down a hallway in her dorm and noticed a student with her door propped open. Inside, handmade glass objects were strewn throughout the room. When Robertson asked what they were, the young woman said she had made them in a glassblowing class offered at the school.

Robertson signed up and immediately fell in love with the art.

“It was like the most magical thing I’ve ever seen in my life,” she said, remembering the first time her instructor showed her how to blow glass. “And then I did it one time. And I knew I couldn’t go throughout my life without not doing it.”

In the first few days of class, she accidentally burned her hand, forming thick blisters in minutes. But that didn’t deter her.

Since that first day of class, Robertson has blown glass for more than 30 years. Now she makes glass beads and jewelry out of her home in Columbia, South Carolina, drawing upon her experiences as a master glass blower. Her home studio was a part of Columbia’s Open studies in early April, a weekend event encouraging residents to visit artists in their area. Adults and kids alike pulled up to her Forest Acres car port to watch her form beads.

Robertson and an acquaintance opened their first glassblowing studio in an old concrete plant in Jacksonville, Mississippi, after graduating from Mississippi University for Women in 1974. It only stayed open for about six months, so Robertson picked up a few odd jobs and eventually took a three-week glassblowing course at Penland School of Craft.

As the only glass blower in the state and one of few women in the field, her name circulated among other artists. In January of 1976, she was offered a job at Leroy Percy State Park as part of a pilot program funded by the Mississippi Art Commission. For the next seven months, she blew glass for kids and other visitors four days a week, living in a log cabin next to a lake teeming with alligators.

Over the next few years, Robertson held artist-in-residence positions throughout the state. Each day, she blew glass in her giant brick furnace in front of people all over the country. Some people thought she was making bricks, ceramics or something else altogether.

“This guy comes up and he goes ‘It’s a whiskey sale, isn’t it? I’ve served time for that!’” Robertson said with a laugh.

By the early 1980s, she owned and operated her own glassblowing studio in the Millsaps art district in Jackson, Mississippi. Susan Ford Studio was open for more than 20 years, and during that time she made glass creations for awards shows and weddings. Several museums throughout the Southeast are home to her art, and three former presidents have her glasswork.

“I think one reason why I was successful with my blown glass was because I usually had great conversations with people when they bought something,” she said. “And so they remember the conversation and what it was like when they looked at that piece that they bought. It makes them feel good. And that’s what I really think art is about.”

After closing her studio, Robertson moved to Columbia in 2005 with her husband, who received a job opportunity. She transitioned to making glass beads and jewelry out of her home. While she is still able to work with glass, she can experiment and design it in entirely new ways.

Equipped with her torch, which reaches over 2,000 degrees, she takes less than half an hour to melt and shape a string of glass beads. When glass reaches such high temperatures, it becomes soft like honey. Then the beads must bake in the kiln and cool down for several hours.

“Every glass has a different personality,” Robertson said.

Greens are stiffer, whereas blues and opaques are creamier.

Robertson, who has mastered the art of glass, finds that making the bead takes considerably less time than designing the piece as a whole. And while she advertises her business through social media and art markets, it’s not about the money.

“Through this whole adventure here, the only desire I had was just to keep blowing glass,” she said. 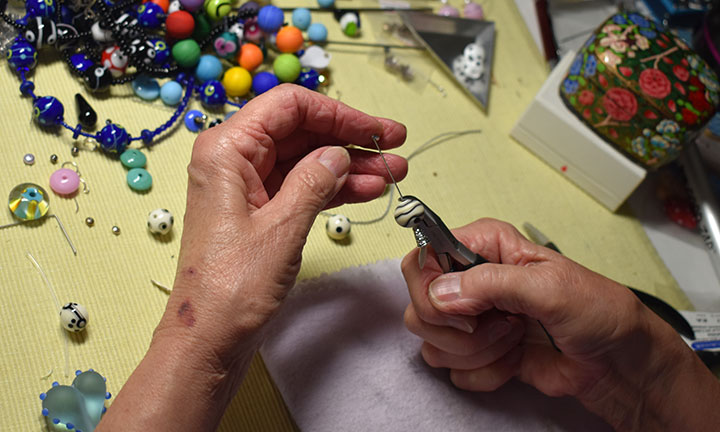 Each color and type of glass has a different personality. Greens are stiffer whereas blues and opaques are softer. 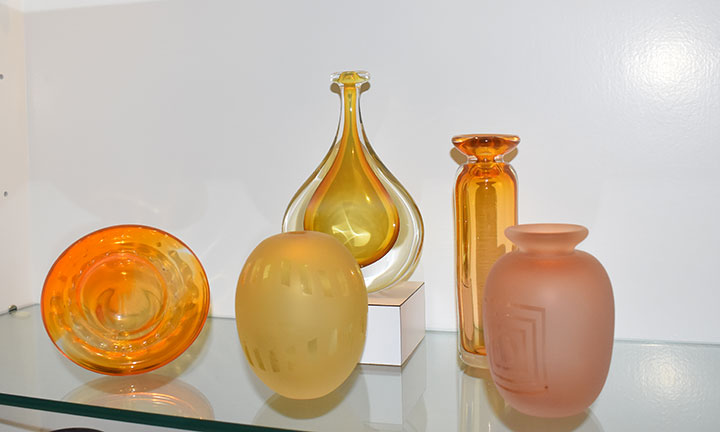 One of Robertson’s signature styles, featured in the middle, gives the illusion that the glass is floating in the center. 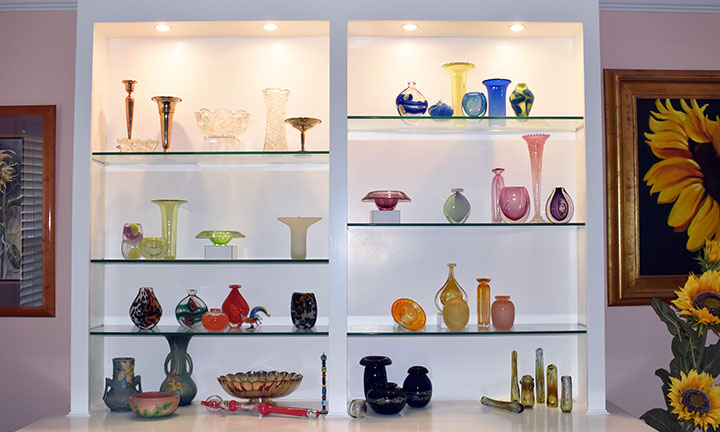 The shelf in Robertson’s home displays handmade glass pieces made by her throughout her career. 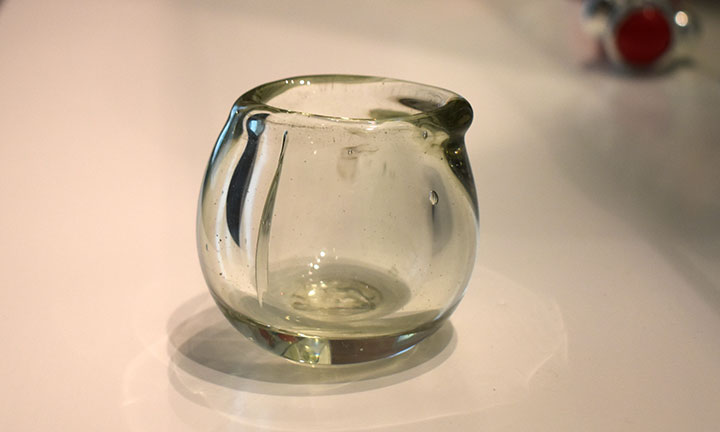 Made in her glassblowing college class, this is the first piece Robertson ever did. While making it, she accidentally dropped it, cracking the side and also burning her hand. 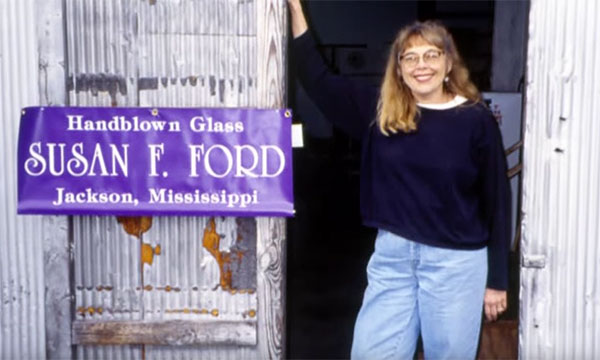 In 1984, Robertson was one of the only glassblowers in Mississippi when she first opened her own studio.

USC has more freshmen than ever before. Here's where they'll be sleeping:

On Saturday, officials stopped a scheduled dogfighting match in Richland County. Officials rescued 305 dogs, and more than 20 people were arrested on state charges of animal cruelty and dogfighting.