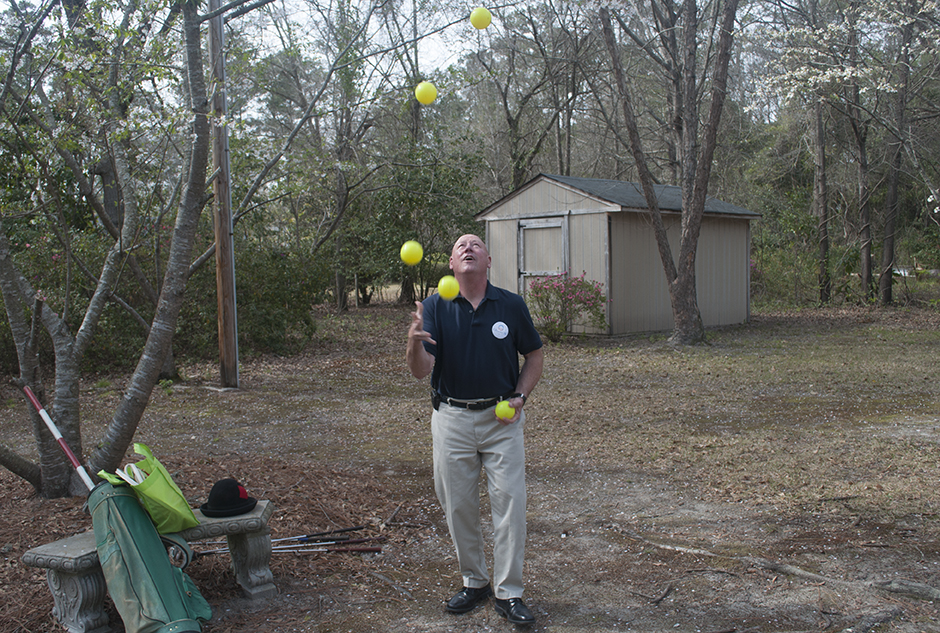 Former professional clown Steve Lough says that as a clown, it is important to know your audience, which is why he was so surprised when his congressional opponent, incumbent S.C. Rep. Ralph Norman, decided to pull out a loaded firearm in public on April 6. 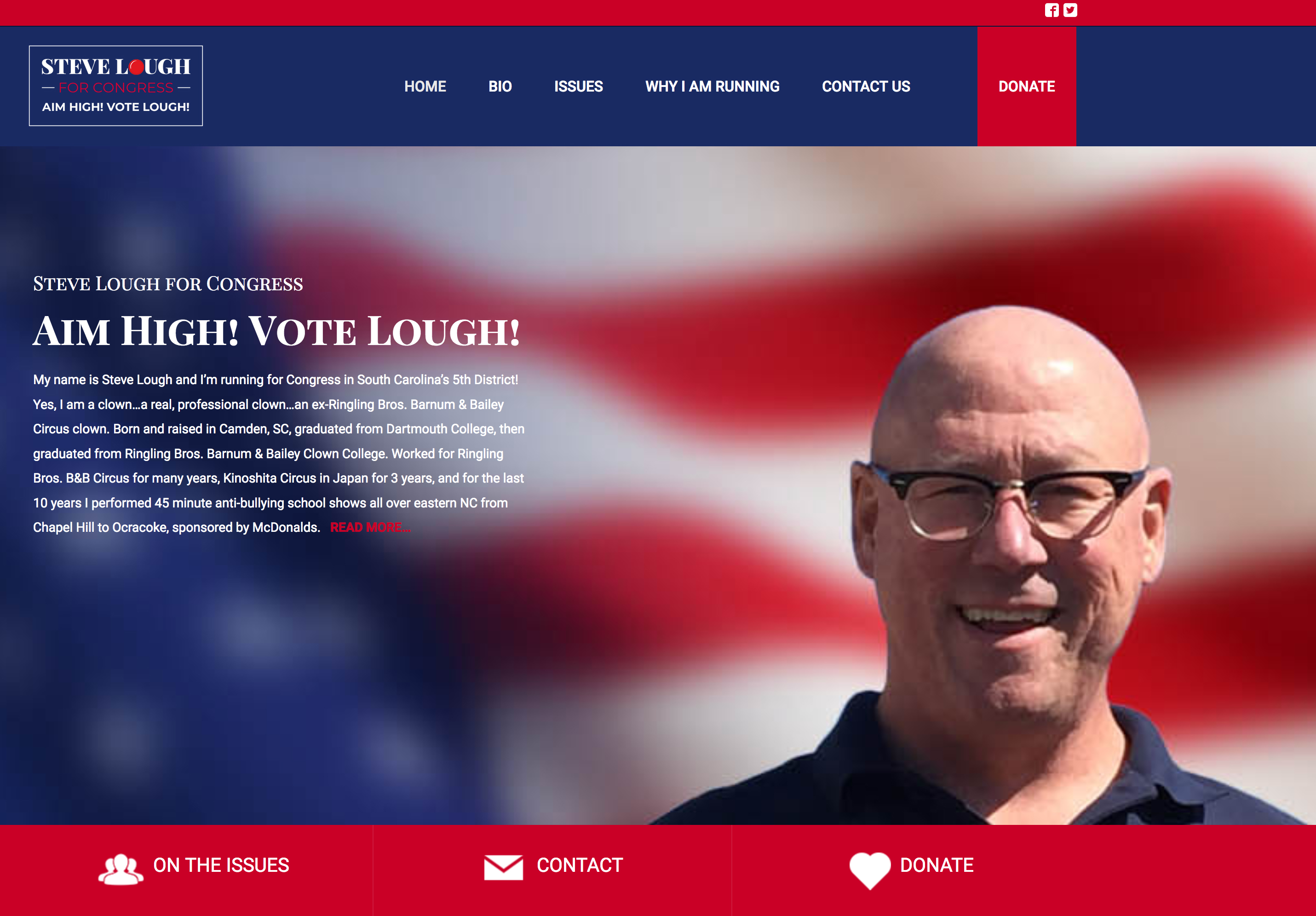 Steve Lough, who has filed to run as a Democrat for the 5th district congressional seat, said he wasn’t happy with the candidates from past elections, so he decided to run himself. 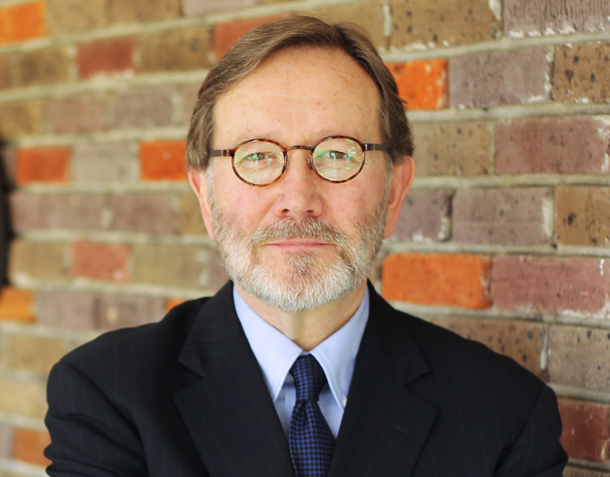 Steve Lough will be running against Archie Parnell (above) in the 5th congressional district Democratic primary on June 12. 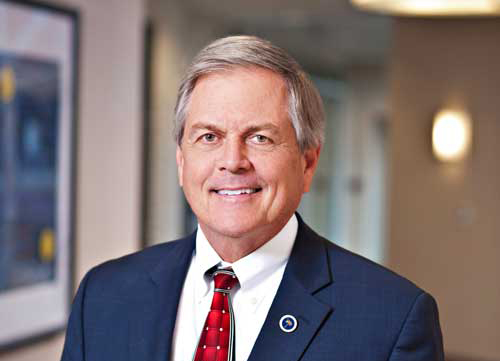 If Steve Lough defeats Archie Parnell in the June 12 Democratic primary, he will run against incumbent Rep. Ralph Norman, above, in the general election on Nov. 6. 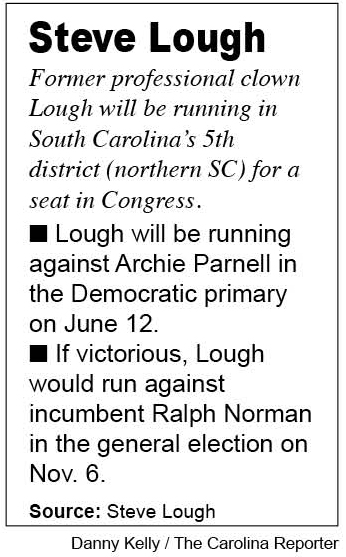 A Democrat running to defeat South Carolina Rep. Ralph Norman said he was appalled that the 5th District congressman placed a loaded gun on the table at a constituent meet-and-greet on April 6.

“The whole thing was insanity,” Steve Lough, a former Ringling Bros. professional clown, said Monday. “Every South Carolinian should be upset at his manners. It’s possible someone there was a victim of gun violence. As a clown, you have to know your audience.”

“It doesn’t advance the serious discussion about kids being afraid to go to school,” Lough said. “He thought he was sending a message to liberals. It was just tacky.”

Norman, who has a concealed carry permit, defended his actions, saying an unloaded gun doesn’t do you any good. He set the .38-caliber Smith & Wesson handgun on the table of a Rock Hill diner for about five minutes during the meeting.

Lough has filed to run as a Democrat in South Carolina’s 5th Congressional district, which is in the northern part of the state below Charlotte. Lough faces Archie Parnell in the Democratic primary; the primary winner will face incumbent Norman in the general election.

Lough is from Camden and was a professional clown for 31 years.  A graduate of Dartmouth College, he volunteered on Barack Obama’s presidential campaign in 2008. Lough supported Hillary Clinton at the beginning of the 2016 presidential race, but soon decided to back Bernie Sanders instead.

Lough thinks the Democratic Party could have done better in past elections.

“We ran the wrong candidates,” Lough said. “We got lazy. We thought the people that have money, they must know what they’re doing; they can win. They can’t win.”

Lough believes he is more well-suited for the job than other candidates.

“If you get to know me, really get to know me, and really read the stuff that I have written and talked about, you’d probably vote for me instead of those other guys,” Lough said.

Lough also encourages voters to do research on the candidates before making a decision. He has established a campaign Facebook page so voters can learn more about him.

“Beware of the candidates,” Lough said. “Find out who they are before you vote. Your vote is very important. That controls the power. And tell everybody you know to vote.”

Lough is not satisfied with what Republicans have done while in power.

“We had an assault weapons ban in this country, and we let that slip away,” Lough said. “We had progress. I’m a progressive for making progress.”

Lough also said that he thinks it’s important to focus on the working class.

Lough wants people to know that he is approachable is always willing to talk with someone.

“Wherever you can, come out and try to meet me, I’ll try to be around the district as much as I can,” Lough said. “Meet with me and talk with me and read about circus history; read the stuff that I write.”

For more information about Lough and his campaign, visit www.clownforcongress.com.