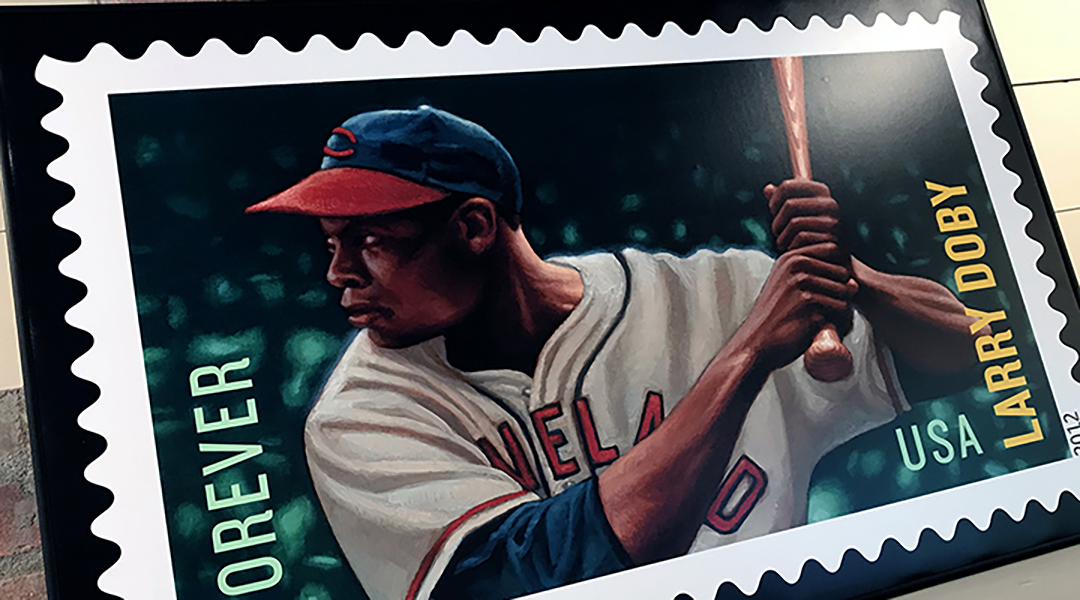 The U.S. Postal Service issued a commemorative stamp of Larry Doby in 2012, honoring his role in pioneering racial integration in Major League Baseball. 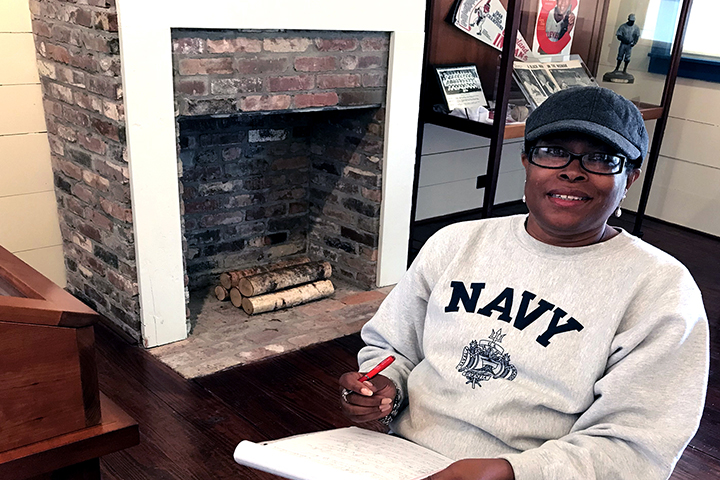 Gwen Shannon, a volunteer at the African-American Cultural Center, says that the story of Larry Doby is important because his story is relatively unknown and there is so much to learn. 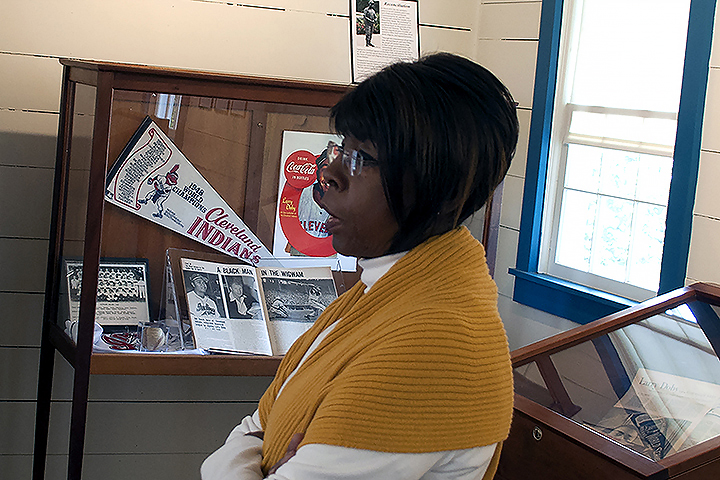 Elizabeth Robinson volunteers at the African-American Cultural Center of Camden on Wednesdays and she says her time learning about Larry Doby has sparked her previously minimal interest in baseball. 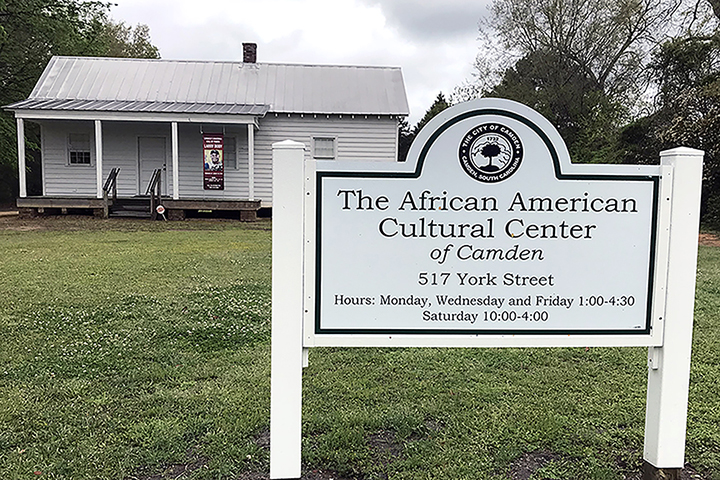 Located on York Street, the African-American Cultural Center of Camden is showing an exhibit on the life of baseball great Larry Doby. It will run until Aug. 30. 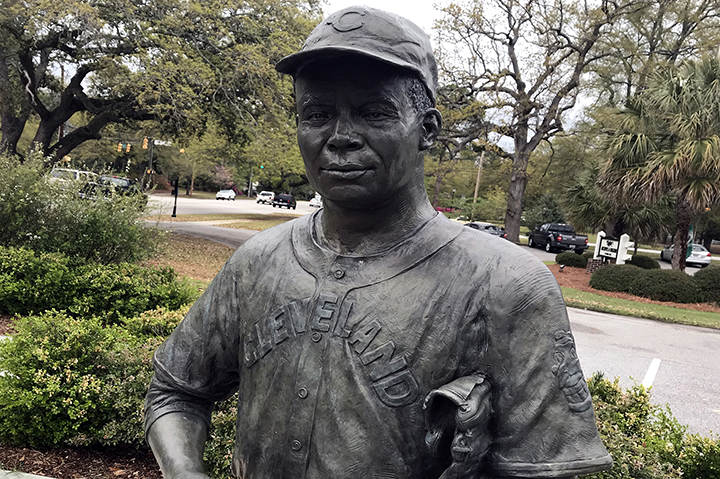 Located in front of the Camden Archives and Museum on Broad Street, the Larry Doby statue was installed in 2013. The ceremony was attended by Sen. Tim Scott, R-S.C., and MLB Hall of Famer Jim Rice.

CAMDEN, S.C. – The small city of Camden, tucked away about 45 minutes northeast of the state capital Columbia, is the birthplace of an often overlooked pioneer in racial integration. Larry Doby, the second African-American player to play major league baseball, was born here and spent the first 14 years of his life in this place he always called home.

Earl Benedict, a lifelong Camden resident, felt the influence of the game-changing second baseman as a child, even though he never saw Doby play in a game.

“Certainly, when I played ball, I thought of Doby as one of the main people to be,” Benedict said. “I don’t know if emulate is the right word, but he was in my mind at times.”

Doby, who died in 2003, was a phenomenon in his time but seemed to fall through the cracks of baseball history in comparison to Jackie Robinson, who broke professional baseball’s color barrier in 1947. Robinson’s story has been documented in hundreds of stories, books, documentaries and in the popular motion picture, “42.”

But the African-American Cultural Center of Camden is trying to pique interest in Doby’s story as the first black player in the American League.

On the field, Doby was a seven-time all-star, the first black player to get a hit and homerun in the World Series, and was the first black player to win the World Series in 1948 with the Cleveland Indians. Unlike Robinson, who spent a year in the Brooklyn Dodgers farm system, Doby went straight to the majors from the Negro League’s Newark Eagles. He made his debut on July, 5 1947, three months after Robinson played his first MLB game.

These accomplishments, plus the immeasurable social contributions Doby’s presence in the league created made him a logical choice for National Baseball Hall of Fame honors. But he dropped off the ballot in 1984 after running out of eligibility.

Doby had to wait until 1998, when he was 74, to get the call that he was a member of baseball’s most prestigious club. The Veterans Committee, which looks at long-retired players, managers, umpires and executives, elected him.

The free museum has been running a comprehensive exhibition of Doby since Feb. 24, complete with photos, memorabilia and an hour-and-a-half long documentary on his life, which ends Aug. 30.

Gwen Shannon volunteers at the Larry Doby exhibit on Monday’s and despite her aversion to baseball, she decided to donate her time to Camden’s most accomplished athlete in its history.

“I can’t stand baseball!” Shannon laughed. “It’s more about the history. I was really unfamiliar with him, but once they decided on the exhibit it intrigued me to come and see someone like Larry Doby, and I’ve learned so much about him.”

Elizabeth Robinson, a former middle school teacher, also volunteers at the African-American Cultural Center of Camden. She hopes it will raise Doby’s profile and fill in some of the historical gaps for school children who visit.

“It will be promoted through the schools but it will be hard to have field trips because they normally do whole grades at a time and this is such a small space,” Robinson said. “But what they can do is have small groups like gifted classes, special education classes and after-school clubs.”

Elizabeth Robinson, like Shannon, was not a baseball fan before she volunteered at museum. But after forgetting her phone and crochet needles one day while volunteering, Robinson toured the exhibit and found herself more absorbed than she thought she’d be.

“I am more interested in baseball now and I have more respect for Larry Doby,” Robinson said. “The other night I was flipping through the TV and I stopped at baseball and I never would have done that before.”

While he was not as well-known as other pioneering black stars of the mid-twentieth century like Jackie Robinson, Willie Mays, and Don Newcombe, Doby was a player of similar caliber and experienced the same level of racism as his counterparts.

Doby’s teammate from 1947 to 1955, Al Rosen told Cleveland Plain-Dealer columnist, Russell Schneider in his 2002 book, Tales from the Tribe Dugout, that Doby put up with everything Jackie Robinson did, and more.

“Jackie was a college-educated man who had been an officer in the service and who played at the Triple-A level. Jackie was brought in by (General Manager) Branch Rickey specifically to be the first black player in major league baseball,” Rosen said. “Larry Doby came up as a second baseman who didn’t have time to get his full college education, and was forced to play a different position in his first major league season.  I think because of those circumstances, he had a more difficult time than Jackie Robinson did. I don’t think he has gotten the credit he deserves.”

Even Earl Benedict, who has always called Camden home, says Doby was not his ball playing idol.

“I was a fan of Monte Irvin and Willie Mays more than Doby,” Benedict said. “Because I liked the Giants and the National League.”

Larry Doby’s entire baseball career was marked by being second in line to break racial barriers. Not only was he the second black player in MLB, he was the second black manager. Doby became the interim skipper of the Chicago White Sox June 30, 1978. This was almost three years after the Cleveland Indians named Frank Robinson their manager.

Bob Heere, associate professor of sport and entertainment management at USC, was born and raised in the Netherlands and didn’t know much about baseball until he moved to the United States. And he had never heard of Doby.

“I know Jackie Robinson. I’ve seen the movie, I teach him in my intro to sport management class, but here’s this other guy who entered the league just a few months later and who was arguably just as successful,” Heere said. “So, holy crap. Why don’t I know about him?”

Heere, coming from a different background on how society views success in sports was able to offer a theory on why Doby has been left behind in the history books.

“America is obsessed with individualism so they’re looking for that great individual and they attribute so much to him,” Heere said. “We all know who was the first man on the moon but we don’t even care about the second man. Anyone outside of the United States would just name the three astronauts collectively.”

While he was living, Larry Doby never complained about the lack of attention he received during and after his playing career, despite his stunning accomplishments. Ten years after his death, Camden unveiled a statue in his honor in front of the city’s archives.

“I was never bitter because I believed in the man upstairs. I continue to do my best. I let someone else be bitter. If I was bitter, I was only hurting me,” Doby told Fay Vincent, former commissioner of MLB, in a 2003 article published in the New York Times.

One thing Doby was firm on was his South Carolina heritage and he never let anyone mistake his Southern origins.

Jerry Izenberg, journalist for the Newark-Star Ledger, followed Doby throughout his career and on multiple occasions he saw him correct reporters on his hometown.

“Larry made sure they knew,” Izenberg said in Pride Against Prejudice: The Larry Doby Story, the film on display at the African-American Cultural Center of Camden. “One time I heard him stop a reporter before an interview and say ‘I’m not from Paterson, I’m from South Carolina.’”

Larry Doby’s pride in his hometown of Camden is being reciprocated by the efforts of volunteers like Elizabeth Robinson. She hopes that Doby’s story, and his relative lack of fame can teach young African-American athletes how past sacrifices shape today’s society.

What the students have got to learn, she said, “is what they (black baseball players) went through to make your life what it is today.” 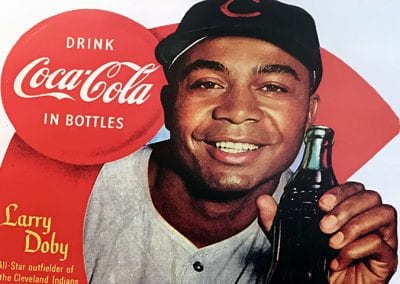 Not only was Larry Doby a pioneer in breaking the color line in Major League Baseball, but his status allowed him to be a role model for young African-Americans. 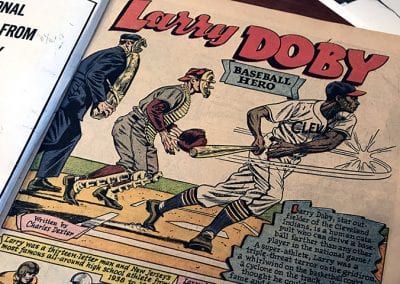 Larry Doby was not considered the best player in the Negro Leagues when he was signed to play for the Cleveland Indians, but his skills were unquestioned after he stepped onto a MLB diamond and started gaining fame. 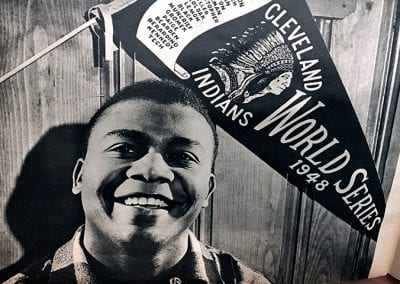 Larry Doby was a member of the 1948 world champion Cleveland Indians, making Doby the first African-American to play in and win the World Series. 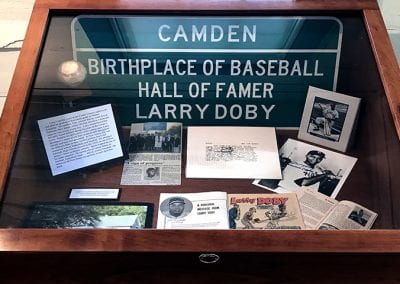 Larry Doby was honored as a distinguished native of Camden with this road sign on November 24, 2002. The road marker stood at U.S. 521 and I-20. 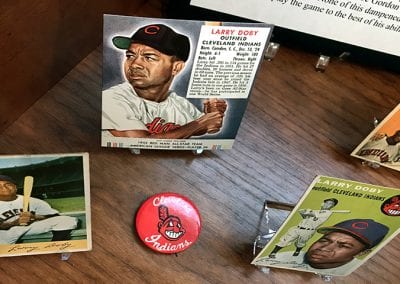 Larry Doby was elected to the Major League Baseball Hall of Fame in 1998 and is one of two from South Carolina, the other, Jim Rice of Anderson. 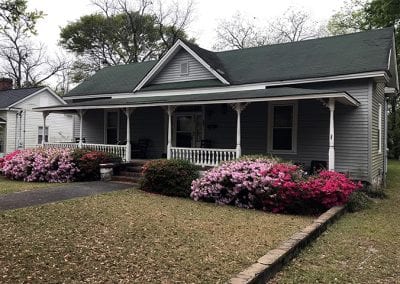 Larry Doby was born at 803 Lyttleton Street, and he stayed in Camden until his high school years when he moved to Paterson, New Jersey to live with his mother. 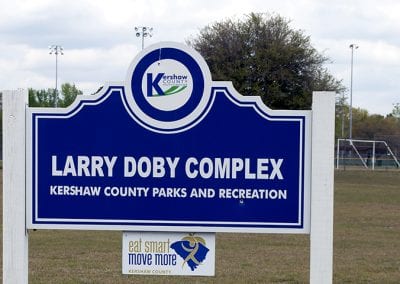