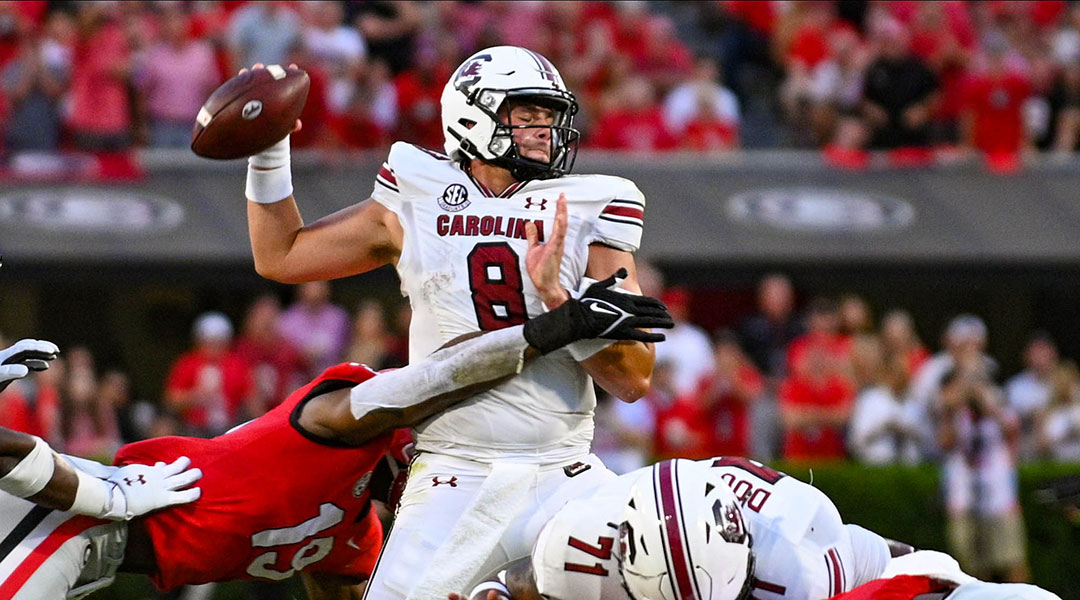 Quarterback Zeb Noland takes a hit against Georgia. The Gamecocks have had issues throughout the season with pass protection, giving up 19 sacks through eight games. Photos courtesy of the SEC Media Portal.

The Gamecock football program ranks towards the bottom of the SEC in virtually every offensive category. Only Vanderbilt has fewer total yards and points than South Carolina this season.

The team has also struggled to maintain control of the football, ranking 128th in the country with 17 turnovers. Coming off a bye week, the Gamecocks hope the extra time off will help them find a rhythm offensively.

“None of us have been good enough,” Head Coach Shane Beamer said Tuesday, addressing the team’s dismal offensive performance. However, he continued, “We’ve got a great chance to finish strong, but nobody is happy where we are.”

The Gamecocks have struggled to find consistency at the quarterback position all season long. They rank No. 87 in the country in passing efficiency and towards the bottom of the SEC in both passing and rushing.

They have also struggled to stay healthy, as the Gamecocks face the possibility of starting yet another quarterback, the third this season.

Sophomore quarterback Luke Doty had season-ending surgery for a left foot injury sustained prior to the season. Before getting shut down for the year, Doty played in five games, throwing for 975 passing yards, 5 touchdowns and three interceptions.

He started four games, winning two of them, but that number could just as easily be one if not for redshirt senior quarterback Zeb Noland’s last-minute comeback drive against Vanderbilt.

Noland has been South Carolina’s starter for the other four games at quarterback, passing for 512 yards, six touchdowns and an interception.

Noland had surgery to repair a left meniscus tear following the game against Texas A&M. While he is expected to be available, the injury could limit his mobility enough for the Gamecocks to look elsewhere at quarterback for the upcoming contest against Florida.

Beamer said Noland “has to do more” in practice to prove his knee is healthy enough for him to be effective. The assumed next man up would be redshirt senior Jason Brown, who transferred from St. Francis (Pa.).

Brown has had minimal playing time as a Gamecock, appearing in three games this season, including 14 passing attempts against Texas A&M in the Gamecocks’ most recent contest. He finished that game with 84 passing yards, a touchdown and two interceptions in his first extended stay in the field as a Gamecock.

Offensive coordinator Marcus Satterfield spoke highly of the transfer. He said he’s a “natural leader, natural quarterback,” and that despite not receiving first team reps the majority of the year, he has always carried himself as a starting quarterback.

Prior to his time at South Carolina, he played in 18 games for St. Francis and started 12. He accounted for 3,124 yards, 28 touchdowns and six interceptions and also ran for 84 yards and a touchdown.

The coaches could also look to true freshman quarterback Colten Gauthier, but Beamer would not name a starting quarterback ahead of the game. Satterfield also did not rule out the possibility of using two-quarterback offense.

“All the quarterbacks, they need to practice well and compete and show that they’re the best person for the job on Saturday night,” Beamer said.

In the preseason, the running back position looked to be a possible bright spot for the offense this season. The Gamecocks would return last year’s SEC-leading rusher in Kevin Harris. Harris was not ready to go for the first couple games after having back surgery in the preseason.

Redshirt senior Zaquandre White, redshirt freshman Marshawn Lloyd and true freshman Juju McDowell were ready to take over for Harris. However, those three have struggled to get in going in the run game. White has tallied 291 yards rushing while averaging 6.9 yards per carry. He is the leading rusher for the Gamecocks with Harris coming in as the second leading rusher.

“Not playing well enough, that’s for sure,” Satterfield said in a press conference on Wednesday. “I thought we’d be a lot further along than we are right now. We’ve got to coach better and play better.”

Throughout the season, the offensive line has not been able to find a consistent starting five. Redshirt senior Eric Douglas, redshirt junior Jovaughn Gwyn and senior Dylan Wonnum have started most of the games at their respective positions. The other two spots have been a revolving door as the Gamecocks try to find a group that will work well together and produce at a high level.

Satterfield doesn’t see a lack of effort in the offensive line, however.

“They are working really hard, and nobody wants to play better than that group does, and they know that they can play better, and we know that we can coach better,” Satterfield said.

Pass protection has  not been able to the quarterback upright, allowing 19 total sacks on the season which is more than two a game. Through sacks alone the team has lost 124 yards.

“Every game, every practice, every day, we just got to keep progressing,” Douglas said at Wednesday’s press conference.

One area that many were unsure of going into the season was who would step up in the receiving game.

One player who has taken a major step forward is senior wide receiver Josh Vann. He has taken on the role of being the number one target and is having a huge senior season.

However, there hasn’t been much consistency behind Vann. Senior Jalen Brooks had two productive games against Georgia and Kentucky, but he is not currently with the team due to personal reasons according to Beamer.

At tight end, Jaheim Bell has been one of the most electric players for the offense when he has the ball. This includes an 82-yard touchdown pass in the Vanderbilt game that led to him recording 136 yards receiving on six receptions.

One player that Beamer and the offense staff said they want to get the ball to more is wide receiver E.J. Jenkins. Jenkins, who transferred in from St. Francis with Brown, could be a mismatch against any cornerback with his 6’7” frame.

“We’ve got to get E.J. out there more,” Beamer said. “A lot of it is the way we do things on our X receiver. So, a lot of that on the simple answer is Josh (Vann) and E.J. are playing the same position, and you want Josh in there as much as possible, but you want E.J. in there as much as well.”

When asked if the scheme of the offense needs to be scaled back, Satterfield said he doesn’t think that is the issue.

“We run the same scheme everyone else runs,” Satterfield said. “The communication I think has gotten better each week; we are night and day where we were at the start of the season. We have to keep plugging away and coaching a lot better and putting them in better positions for success.” 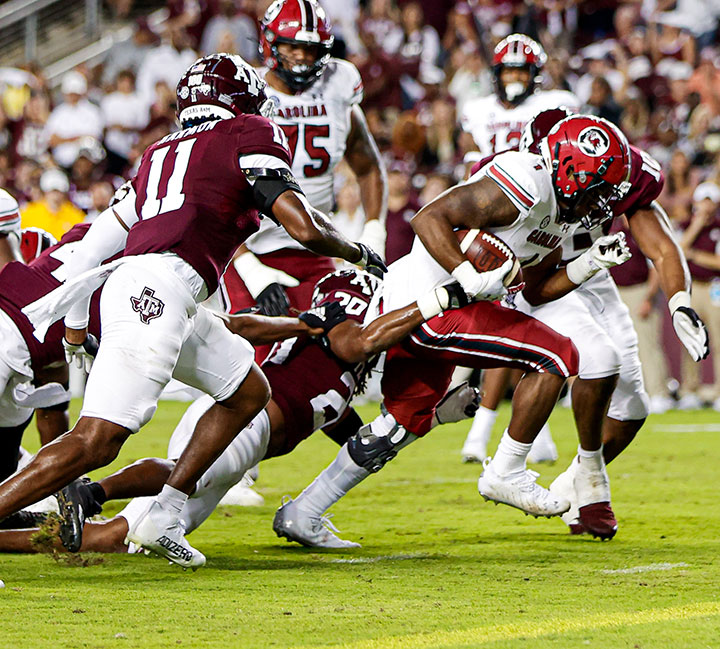 Running back Marshawn Lloyd tries to escape a tackle against Texas A&M. The Gamecocks running backs rank eleventh in the SEC, averaging 117.5 yards per game. 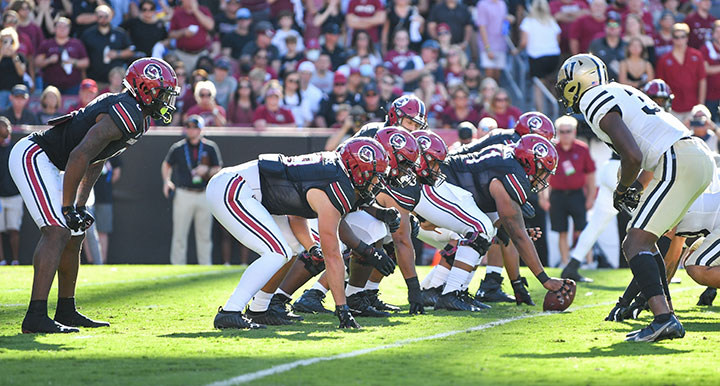 The Gamecock offensive line has struggled to find its footing in both pass protection and run blocking. 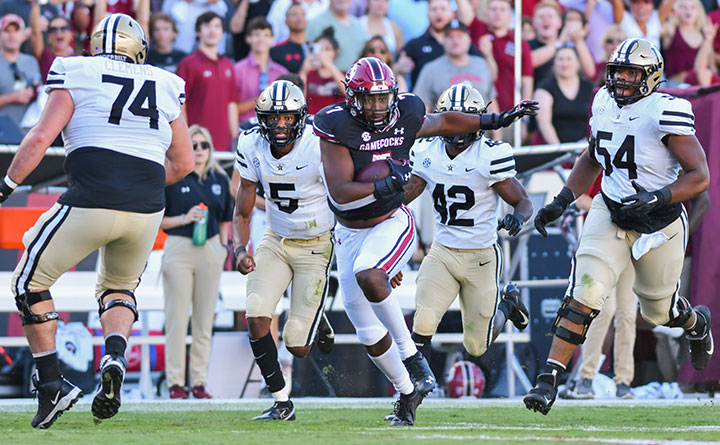 Wide receiver Ahmarean Brown transferred to the Gamecocks from Georgia Tech, where he tied Calvin Johnson for the most receiving touchdowns by a freshman with seven. Brown only has six receptions for 38 yards so far as a Gamecock. 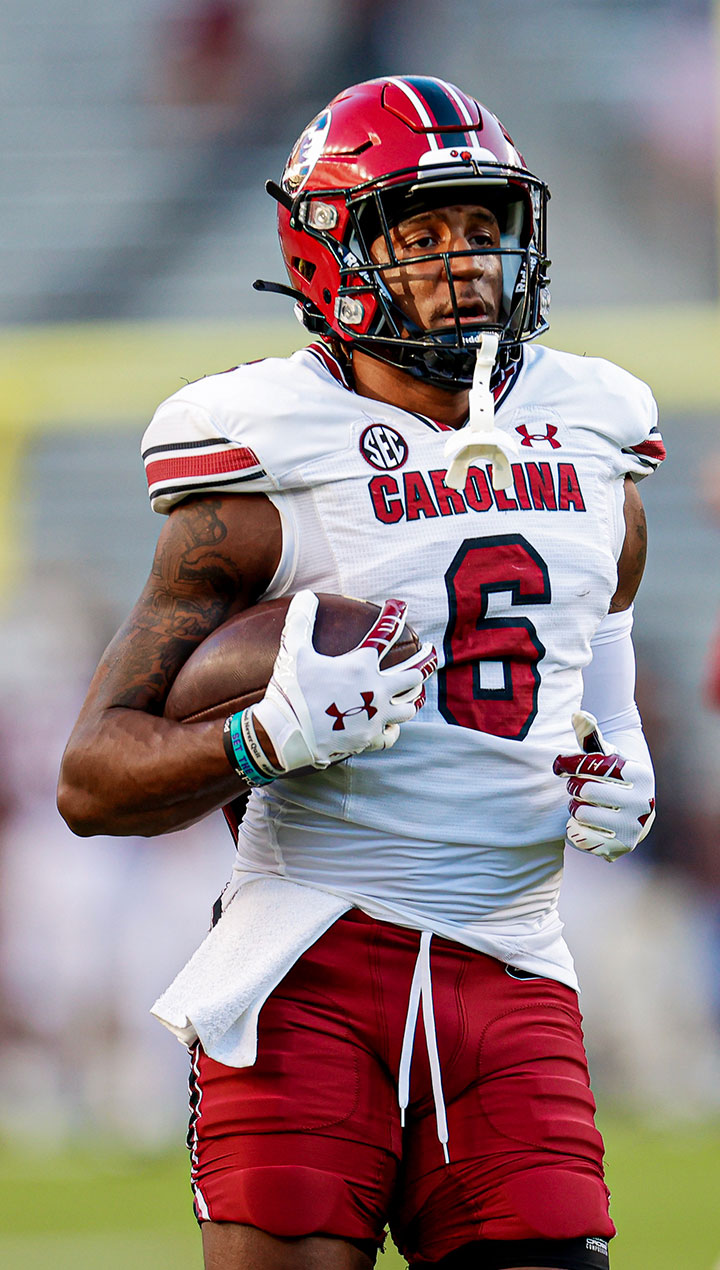 Wide receiver Josh Vann leads the Gamecocks with 431 receiving yards and is tied for most touchdown receptions with two. Vann is also the only Gamecock to average over 50 receiving yards per game this season. 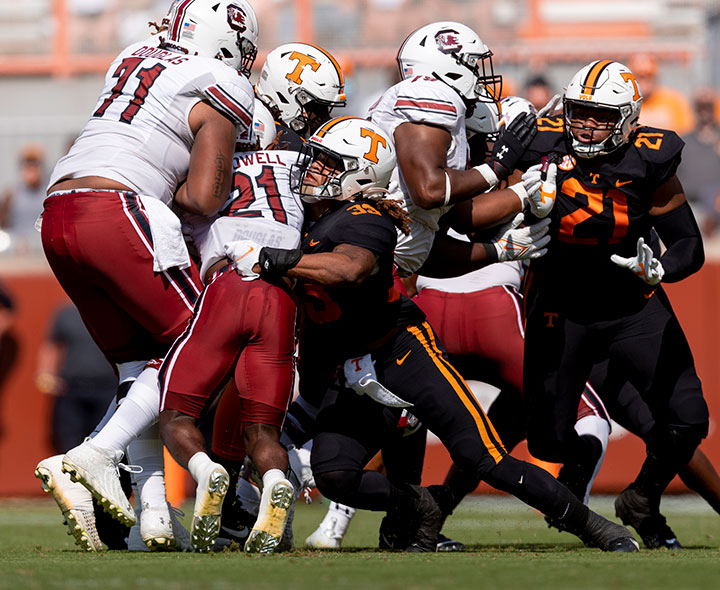 Running back Juju McDowell is stuffed at the line against Tennessee. The Gamecocks have averaged 3.4 yards per rushing attempt and rank outside the top 100 teams in rushing offense. 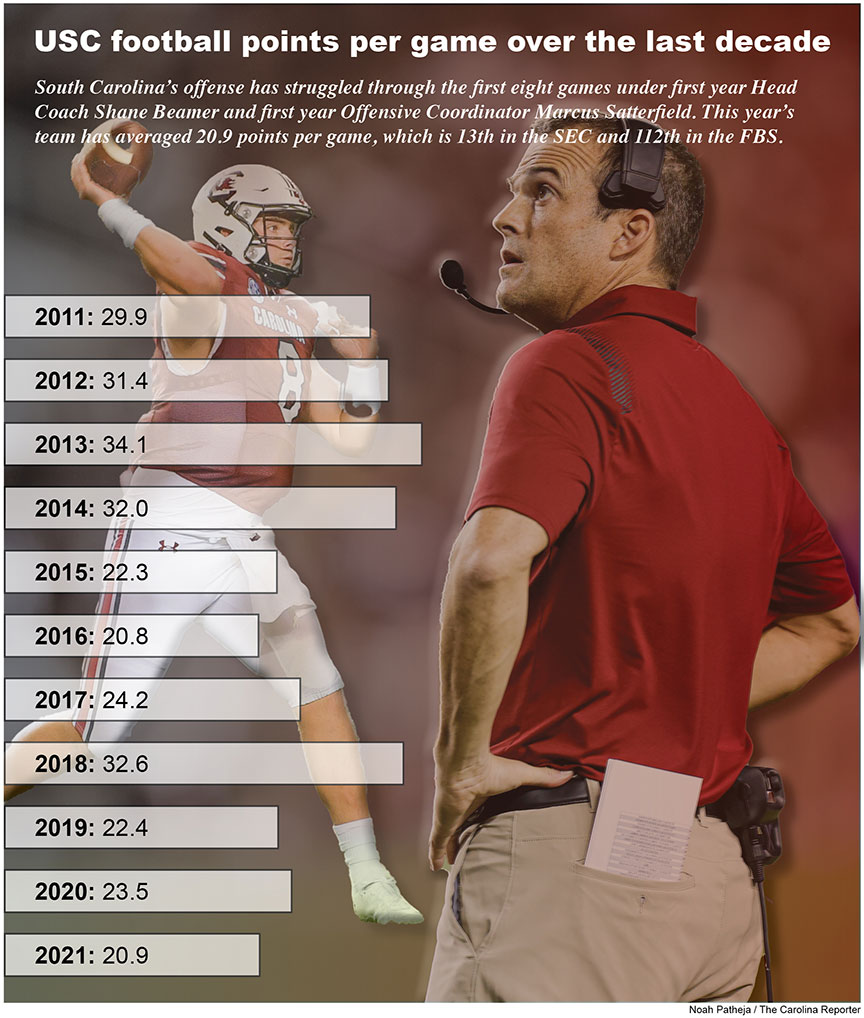 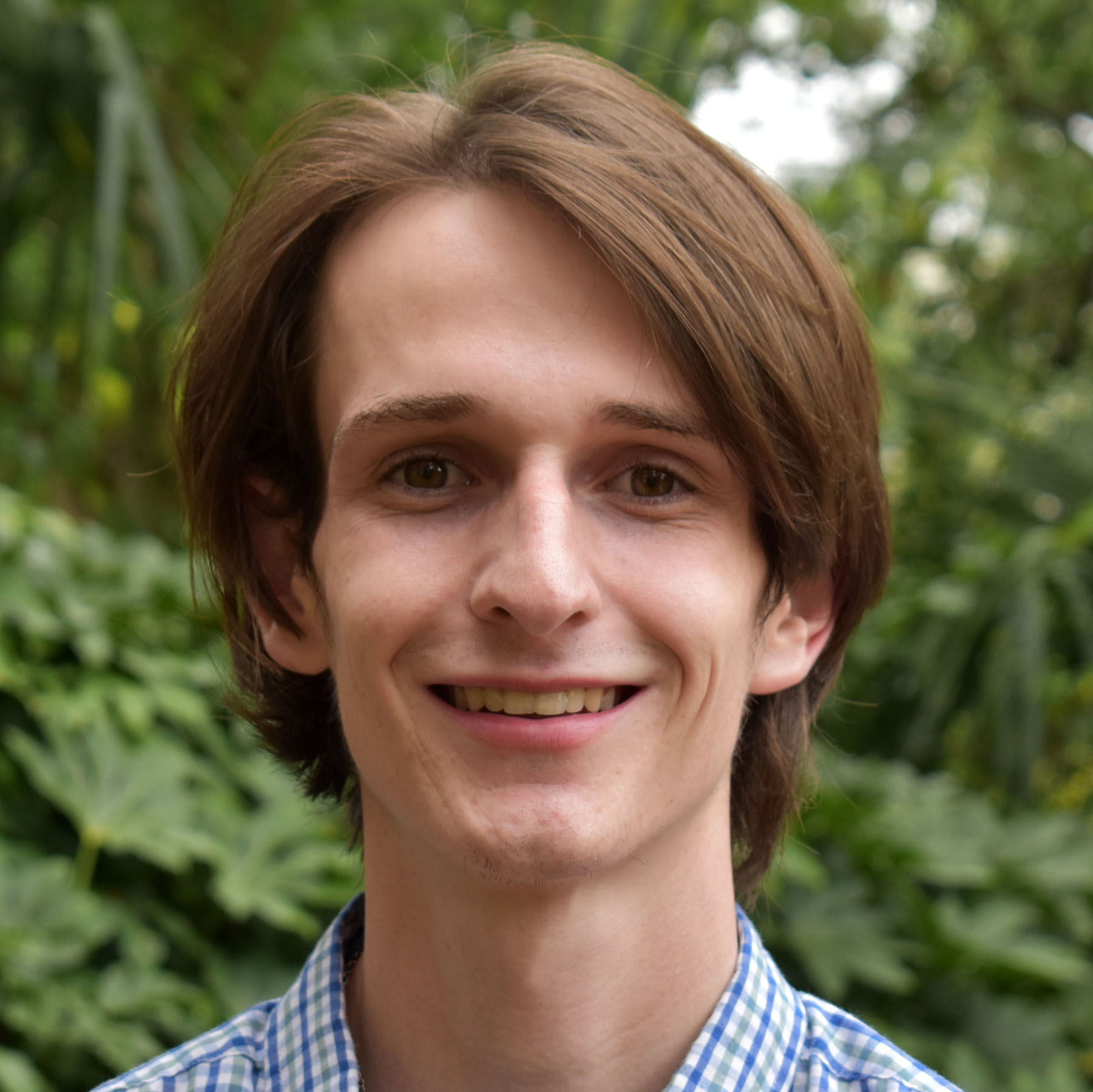 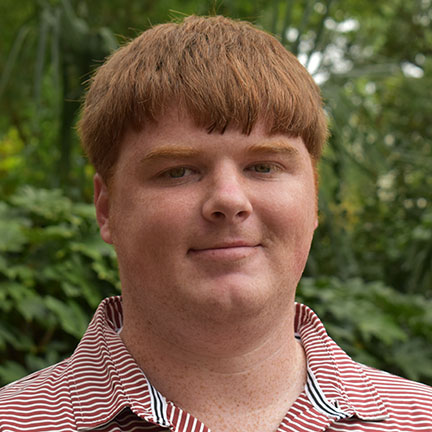 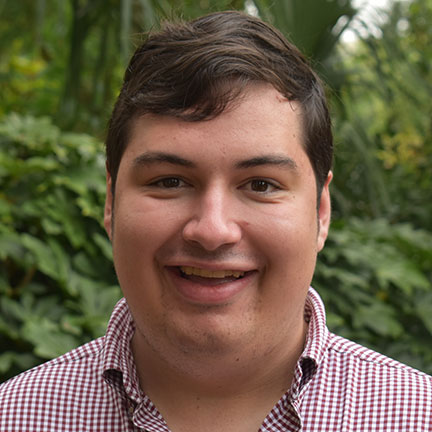