A historic mural on the back of the former Ag First building on Hampton Street in downtown Columbia has been vandalized.

The mural, aptly titled “Tunnelvision,” was painted by Columbia artist Blue Sky, and features a sun at the end of a dark tunnel. Since 1975, the sun was lit by neon lights.

But Blue Sky recently noticed that something was off.

“I noticed the sun was not shining. That sun has been shining for 44 years, by the way. Every day, for 44 years. And night,” he said.

Now, he’s offering a $500 reward to find whomever is responsible for taking the light away from “Tunnelvision.”

This piece is particularly special to Blue Sky. In 1974, Warren Edward Johnson became Blue Sky, and “Tunnelvision” was the first piece of art he completed under the new moniker.

“It was like I never existed before,” he said.  The mural, entirely commissioned by the artist himself, is snugly placed between another one of his public masterpieces, “Busted Plug,” which is billed as the “World’s Largest Fire Hydrant,” and Palmetto Health Baptist Hospital.

Sky says that the mural has been a source of hope for hospital patients, many of whom can view the art from their hospital windows.

“Over the years, many people have told me how much they’ve enjoyed it, and how it was a symbol of hope for people who were dying and sick and everything,” he said.

Tenant Suresh Yarlagadda’s loft is right behind the mural.  He says that looking at the mural was a “very humbling, good way to start the day.” But ever since the sun’s lights were smashed, his mornings have been a little less bright.

He says that the vandalism is “a hit on the city,” noting that “Tunnelvision” is a common tourist attraction, and one of the reasons he signed a lease at Landbank.

This isn’t even the first time that the sun on “Tunnelvision” has been damaged. Shortly after it was completed, someone threw a brick at the sun.  Sky then replaced the cover of the sun with bulletproof acrylic. Now that the light at the end of tunnel has been damaged yet again, he’s demanding answers. 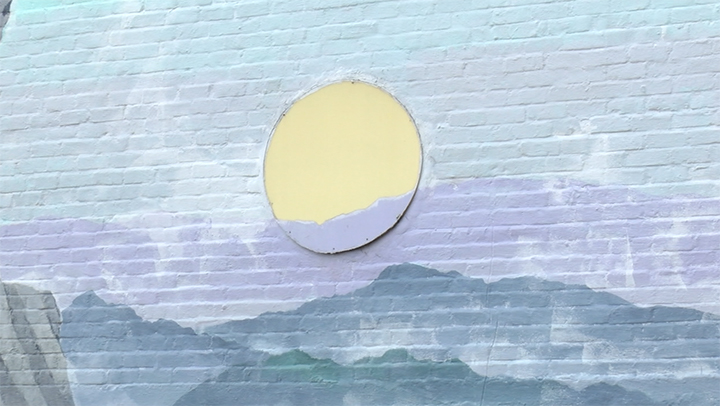 The sun on “Tunnelvision” had been lit by neon lights since 1975.  Someone pried the cover of the sun up, and smashed the neon lights from behind. 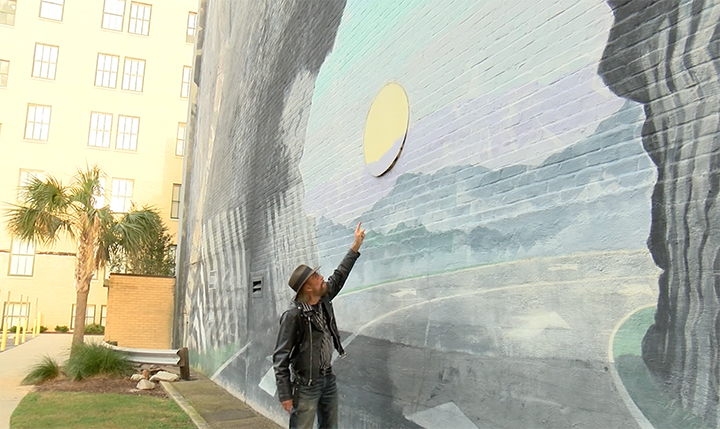 Warren Edward Johnson legally changed his name to Blue Sky in 1975, and “Tunnelvision was the first piece of art he completed under his new name. 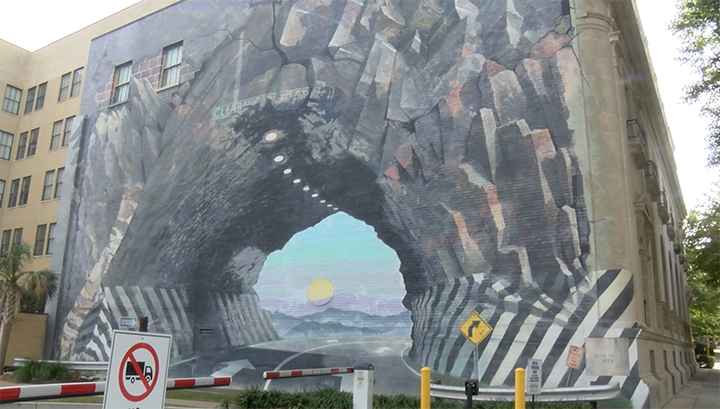