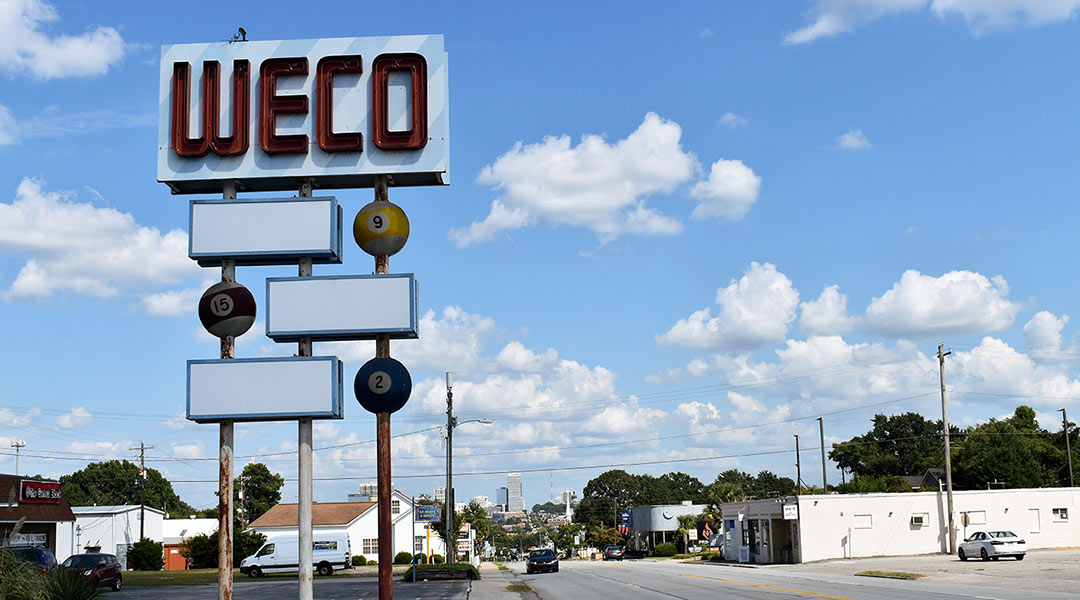 The historic WECO sign in West Columbia. The sign was removed on Tuesday, Sept. 20, to be refurbished and is scheduled to be back up in early November. (Photos by Michael Sauls)

A piece of West Columbia’s city skyline was taken down Tuesday morning, but the change is only temporary.

The historic WECO sign that stands on Meeting Street is being refurbished by Flagship Sign Design, a Columbia-based signage company, and the company said it should be back up in the next six to eight weeks.

When work to fix the sign is complete, the West Columbia community can expect to see a new-and-improved version of the relic, with new paint and lights.

Riggs Partners, a marketing firm based in West Columbia, has owned the lot that the sign sits on since 2007 and spearheaded the project with help from the city.

“It’s surreal,” said Teresa Coles, president of Riggs Partners. “We have been dreaming of this day and talking about it for 15 years, ever since we moved into this building, and we couldn’t be happier.”

WECO Charity Thrift painted over the iconic billiard balls that are on the sign, but as time went on and Riggs Partners moved into the building, the white paint flaked away.

“The sign is iconic, both in terms of the design — it’s a very retro look and feel associated with that — and just from the design aesthetic standpoint, we knew it was a treasure,” Coles said. “We really consider this to be a piece of public art above all things, and so we knew that it would be a really good long-term investment for the city and for us to be a part of restoring it to its former glory.”

Coles said the process to get the sign restored started in early 2021, when the city of West Columbia reached out with the idea.

“We’re excited because it’s going to be beautiful and restored to its original glory or even better,” said Anna Huffman, West Columbia’s director of public relations. “And something that people can come and take their picture with. And it’s not deteriorating – it’s there for hopefully 50 years to come.”

Though the plans have been in motion for 18 months, refurbishing the sign has been an idea in the back of Coles’ head since her company moved from Gervais Street across the bridge to 750 Meeting St.

To keep the possibility alive, Riggs Partners made sure to have electricity run out to the sign while renovating the building in 2007.

“We’ve been very passionate about this sign for many, many years,” Coles said. “We were very excited and humbled to be a part of this project.”

Huffman said the refurbishment of the sign fits right into plans adopted by West Columbia’s City Council in 2018 to redevelop and revitalize the city. The funding for the sign’s refurbishment is allocated through those plans, but a firm price is to be determined, Huffman said.

“The revitalization of the sign is a sign that Meeting Street and that area is growing and getting revitalized, just as State Street did,” Huffman said. “It’s making its way up – Meeting (Street) and into Triangle City and beyond.”

Joel Merrill, the owner of the sign company, said it’s aiming to have the project complete by early November.

He said he was excited to finally get the sign down Tuesday morning to begin the refurbishing process.

“It was like Christmas morning — I was very excited this morning,” Merrill said.

They took the billiard balls off first. It was like opening Christmas gifts, Merrill said, because he found out that there was a neon light system inside them, still intact.

Merrill, who’s lived in West Columbia for 50 years, said he used to drive past the WECO sign every day when he was in high school.

“It makes me proud,” Merrill said. “That’s one of the things I really enjoy about this business, is I get to see the fruits of our labor on a regular basis as we make our customers happy by putting their brand out there.”

Plans for a ceremony marking the sign’s unveiling have yet to be finalized but will be by November, both Huffman and Coles said. 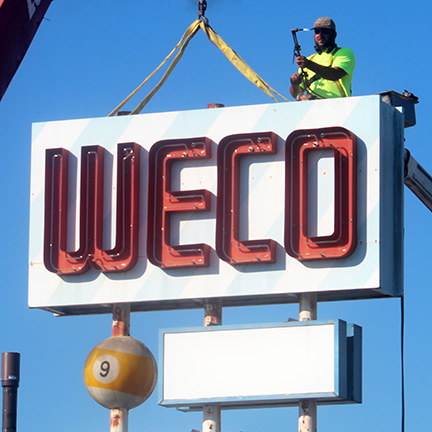 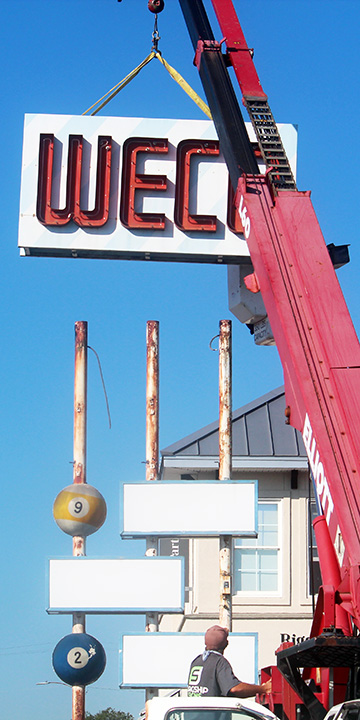 The top of the WECO sign being removed from its base lifted in the air by a crane. 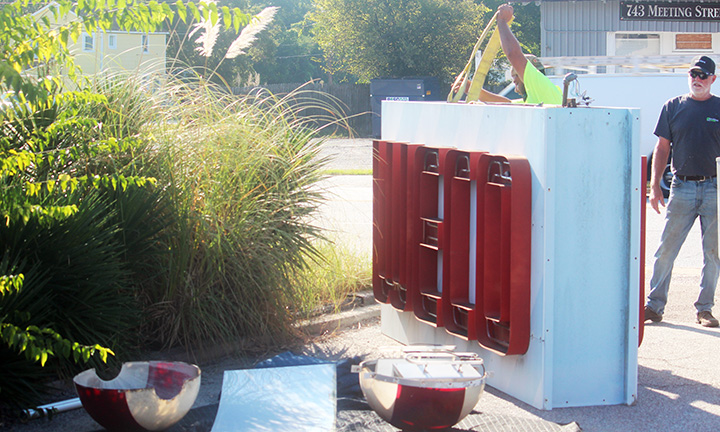 The top of the WECO sign on the ground next to a cracked open billiard ball.