Charlotte will be home away from home for Lady Gamecocks 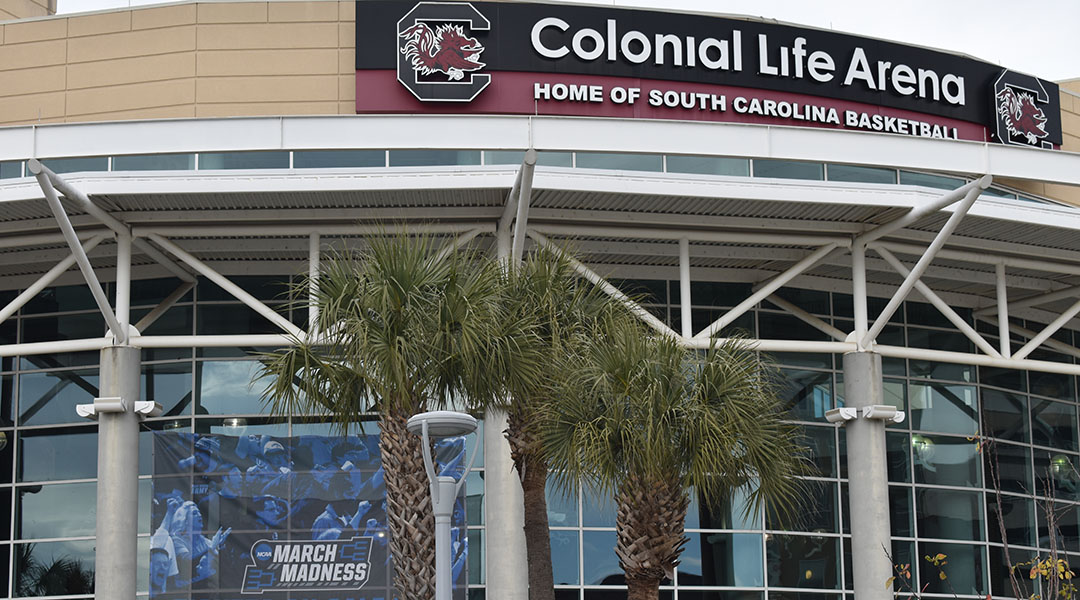 Barring an unforeseen twist in the regular season, South Carolina women’s basketball will host its first and second round NCAA Women’s Tournament games for the sixth straight season.

But home this year won’t be home court at Colonial Life Arena. Columbia’s role as a host city for the first two rounds of the NCAA Men’s Tournament triggered a series of conflicts that will force the Gamecock women to host in Charlotte, North Carolina.

After Columbia was chosen to host the men’s tournament, the Gamecocks requested a waiver from the NCAA to host the women’s tournament at an alternate site. Columbia doesn’t have another venue that meets NCAA requirements, and acceptable venues in Charleston and Greenville already had events scheduled for the weekend in play, sending the team across state lines.

They were given permission to use UNC Charlotte’s Halton Arena on Feb. 14.

John Rotrow, a Columbia resident who often attends games at Colonial Life, said he will withhold judgment on the decision to move the women to Charlotte until their games are over.

“Our Gamecock FAMS have shown their loyalty to our program through the postseason every year, and I know they’ll continue to do that with us in Charlotte,” she said.

“Charlotte is important for Gamecock Athletics,” he said, “and this will also be a great opportunity to have the NCAA Women’s Basketball Tournament in a large market.”

Proximity was also on the minds of fans like Marie Correro, who has traveled to nearby locations like Greenville to see the women play before.

“I would have loved to have seen them here, but at least it’s Charlotte. It’s not cross country,” she said.

Although he is disappointed that the women’s team is hitting the road so early in the postseason, Rotrow said he’s excited for the area to get a chance to “show off our city” during the men’s tournament.

That attitude is something Experience Columbia SC Sports executive director Scott Powers hopes will be felt throughout the city during the tournament. Powers, who led the city’s effort to bring the men’s tournament to town, said a strong showing would go a long way towards attracting other events.

“I think we’ll be feeling that pride from the locals that we’re hosting this event again,” he said, “and the pride from the fans of the visiting teams that they made the ‘big dance.’”

Powers said the economic impact of the men’s tournament on the city is hard to measure without knowing which eight teams are coming, because different teams will bring different numbers of fans. Still, he estimates that upwards of 25,000 people could travel to Columbia for the event, an economic impact that could top $9 million.

That’s a number Powers said is simply “not comparable” to the impact of hosting the women’s tournament, which only brings in three visiting teams.

He added that he’s hopeful the men’s tournament event will also help “grow the sport of basketball in South Carolina,” something that helped his team get Staley’s approval for the project despite the impact on her team.

“We got the blessing of the athletic department before we ever put a bid together,” he said. “That was something that Coach Tanner had a discussion with Coach Staley about.”

Although Staley’s Gamecocks won’t officially find out if they are a host team until March 18, they’ve been projected to host throughout the season.

The program has already announced details for official bus trips to Charlotte. Round-trip tickets are $65 for one round and $100 for both. The package includes transportation to and from Columbia, a general admission ticket, a T-shirt and food. Tickets are available now and will be refunded if the team isn’t selected as a host.

They will also host a selection show watch party at Williams-Brice Stadium on March 18. Tickets for that event are $25.

As for whether the Gamecock faithful will join visiting fans at Colonial Life for the men’s tournament, Rotrow said his decision depends on which teams are sent to Columbia.

“If there’s teams that I really don’t like, I won’t come,” he said. 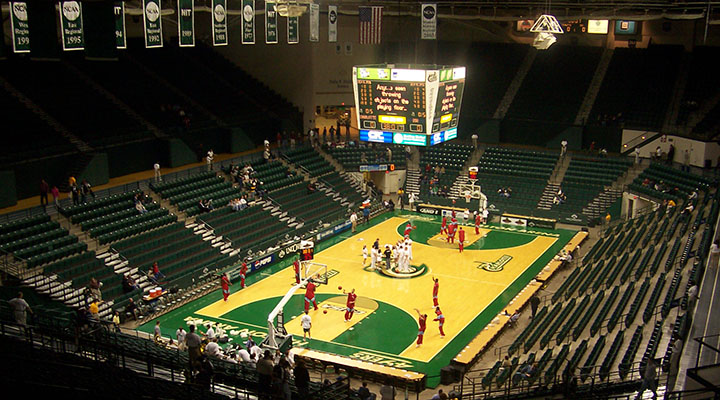 Halton Arena, where Gamecock women’s basketball will play their first and second round NCAA Tournament games if they’re selected as a host, is located on the campus of UNC Charlotte. (Courtesy of Creative Commons) 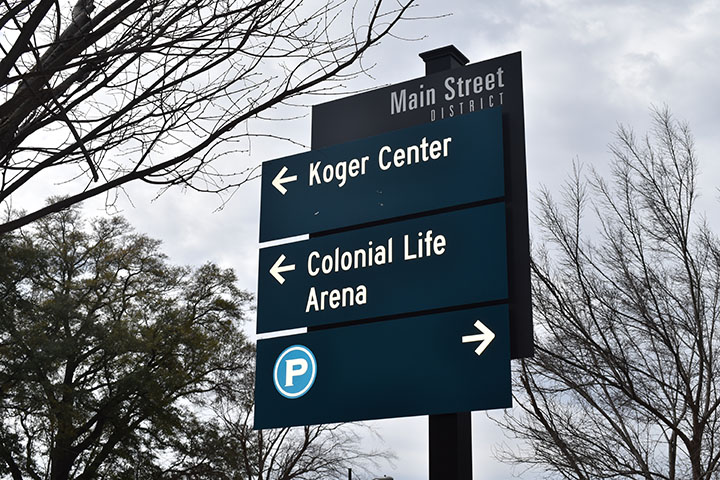 The City of Columbia installed new directional signs around the city’s downtown entertainment districts in preparation for hosting two rounds of the 2019 NCAA Men’s Basketball Tournament in March. (Mary Ramsey / The Carolina Reporter) 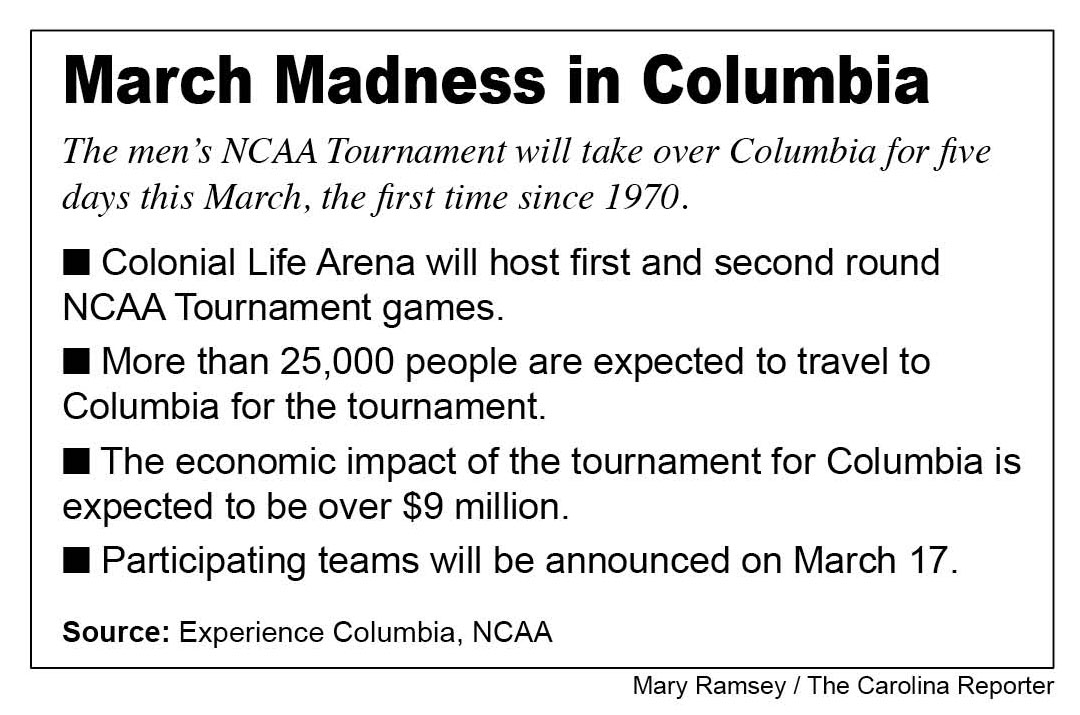