How to build a budget gaming PC 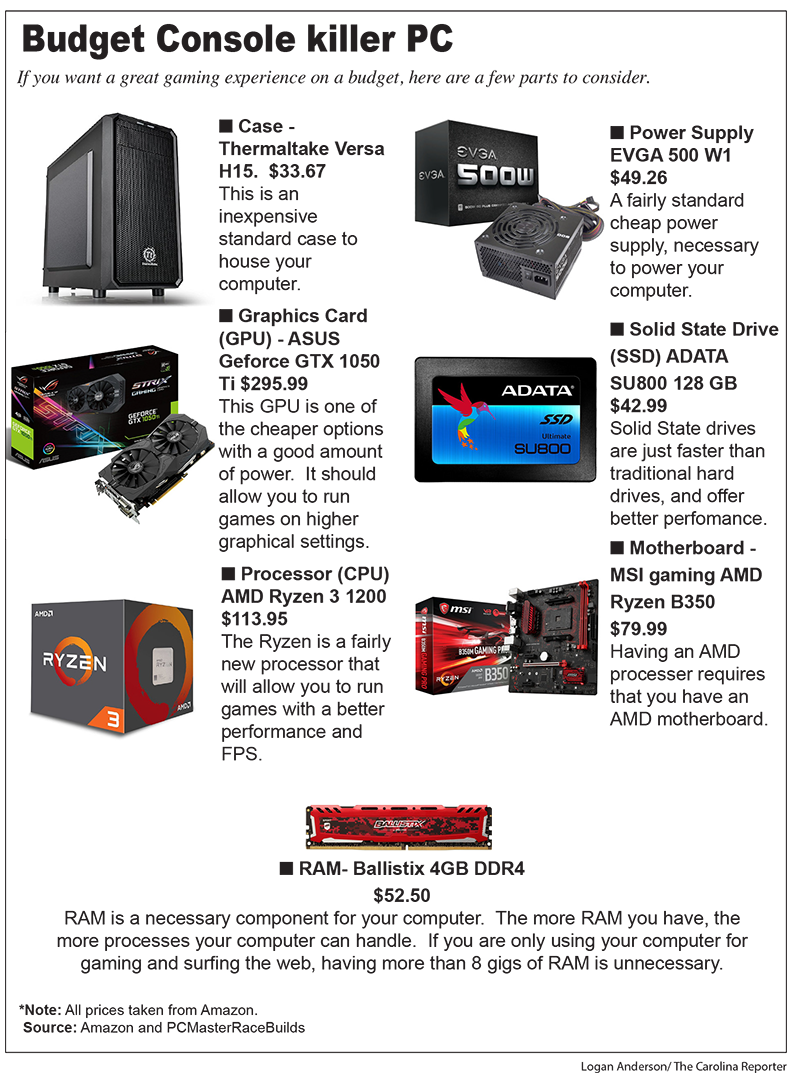 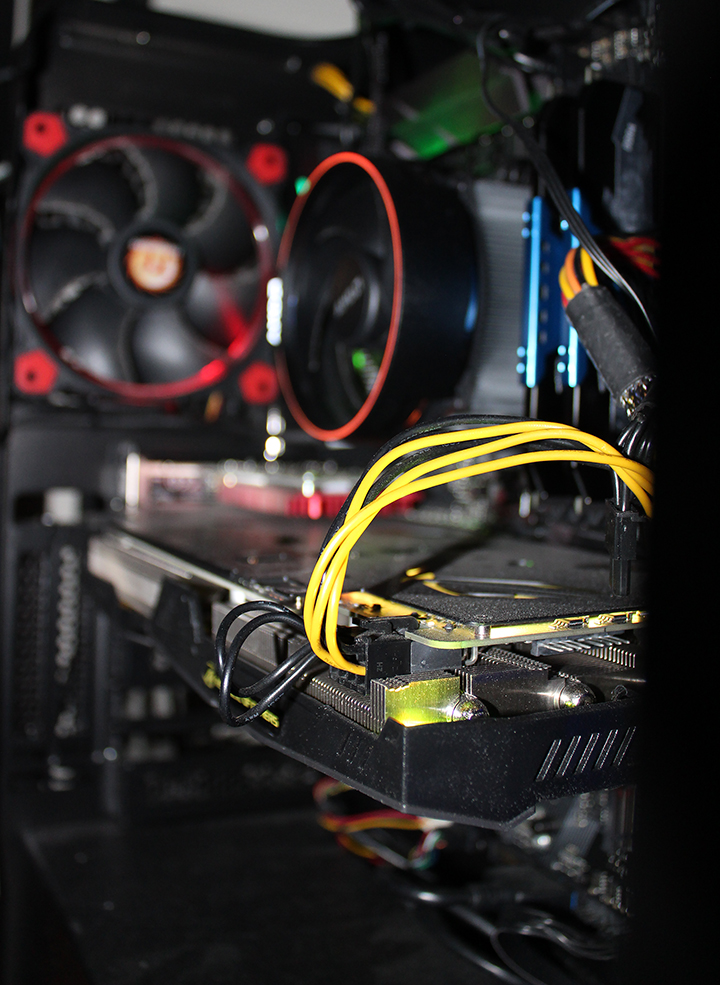 Here is a brief view into what the inside of a gaming computer could look like. 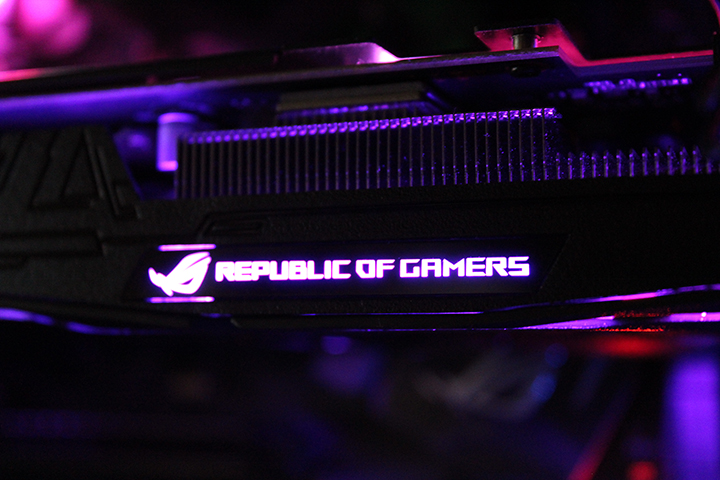 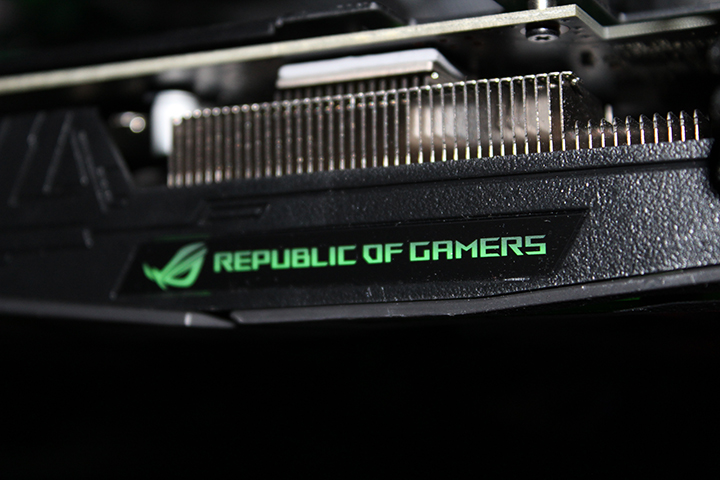 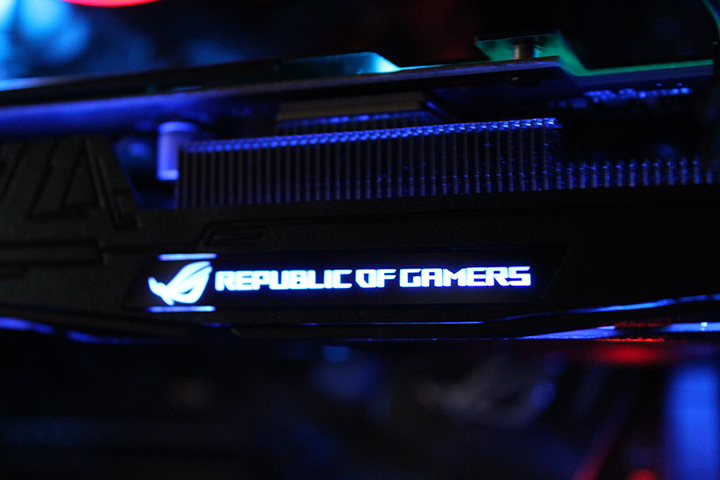 This graphics cards is what a GeForce Gtx 1070 looks like. On top of being a great graphics card, it cycles through the colors of the rainbow and gives the user total control of what colors it can cycle through.

When building a PC on a budget, it’s important to pay attention to the price of the components.

The specific build I recommend can be found here, and was created by Adrian Benavides.  Benavides has created multiple builds that  compete with gaming consoles, and has a lot of experience with building PC’s on a budget.  The overall cost for this build ends up being around $600, excluding the cost of some of the peripherals such as the monitor, keyboard and mouse.  However, this cost can be diminished if you search around for deals or used hardware.

This build creates a computer that can run some of the newest games on the market at a resolution of 1080p at 60 frames per second (FPS), the standard for PC gaming.

What makes this build possible are two parts – AMD’s new Ryzen 3 1200 processor and Asus’s Geforce GTX 1050 Ti graphics card.  The processor (CPU) and the graphics cards (GPU) are the most important parts to invest in because they make the biggest difference in performance.

The AMD Ryzen is a CPU that came out in the middle of 2017, and gave Intel processors a run for their money.  The specific CPU even allows you to overclock it, which means that it has the option to process information faster than it was designed to. However, this does cause the CPU to produce more heat. If you plan to do this, buy some additional fans for your case.  Intel CPUs do not easily allow for overclocking. Benavides recommends the AMD Ryzen 3 1200 as the best entry-level processor on the market.

For this build, you will need a motherboard that is compatible with the AMD Ryzen CPU. Benavides recommends the MSI B350M Gaming Pro. It has four USB 3.1 ports, supports CPU overclocking and allows for a solid-state drive – more on that later.

The rest of the parts remaining in the build are standard for building any PC.

Every computer needs Random Access Memory (RAM). Benavides advises buying one single module of Ballistic 4 GB DDR4-2666. However, he recommends that you eventually pick up a second one, but because of the budget limitation he only includes one. If you plan on doing anything more than gaming and surfing the web, such as editing photos or video, you will want to buy an additional module as soon as you can.

For storage, the build proposes a solid-state drive (SSD). When an operating system, such as Windows 10, is installed on an SSD the overall performance of the PC is enhanced. For example, the PC won’t take but seconds to start up when you turn it on, and overall is generally speedier. Benavides suggests a 128 Gig SSD from ADATA.  This is a relatively small amount of memory when considering that some games can consume as much as 50 gigabytes of memory. You will probably want to invest in an additional internal hard-drive. You can find one terabyte hard-drives for as little as $50 online.

You also need to invest in an operating system.  Windows 10 is probably your best bet when it comes to gaming.

Another crucial component is deciding what case you will house your computer. For this build, you’ll probably want an ergonomic case and the case that Benavides recommends is from Thermaltake.  If you deviate from the build recommended, make sure that all of the components dimensions will fit inside the case you have chosen.

You will also want a way to connect to the internet. You can do that with a standard Ethernet cable, or buy a USB dongle.  Benavides suggests the TP-Link N300, which plugs right into one of the USB ports on the computer and will allow you to connect to a Wi-Fi source.

Last but not least, you will need a power supply. Benavides recommends the EVGA 500 W1.  A fairly standard power supply for the amount of money it costs.

As for putting all of the components together, there are plenty of tutorials that can walk you through the step-by-step process. I recommend this Youtube tutorial for beginners from TechSource.

These are all the pieces you will need for the inside of your gaming PC; however, you will also need to consider the peripherals as they are not included in the budget.