Impeachment primer: What it means, where we go from here 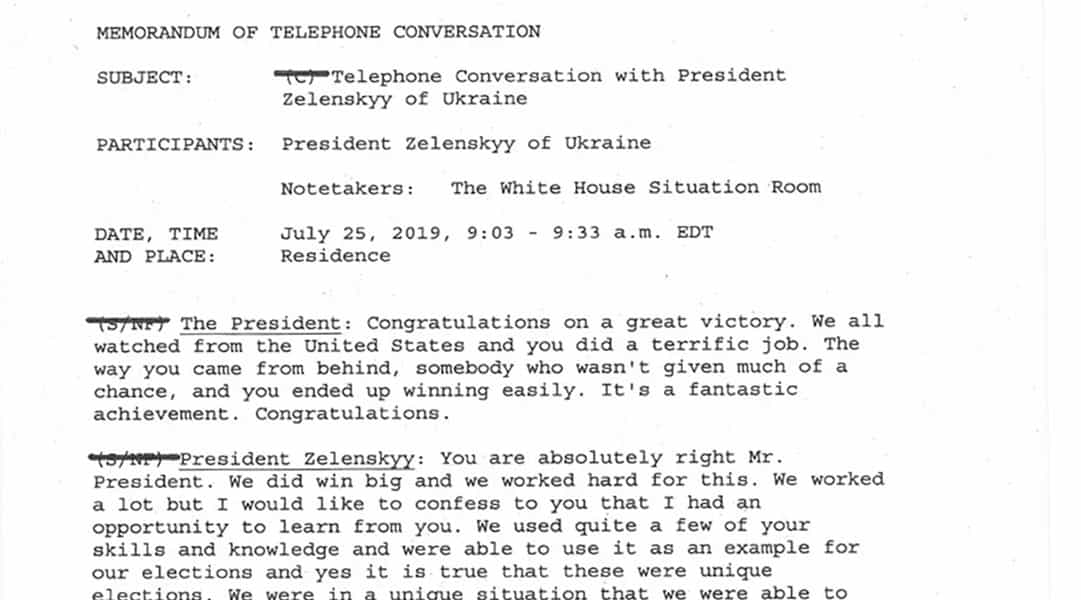 The first page of a transcript detailing President Trump’s phone call with the president of Ukraine.

House Speaker Nancy Pelosi announced the launch of an official impeachment inquiry against President Donald Trump on Tuesday in response to a whistleblower complaint against the president.

Article 2, Section 4 of the U.S. Constitution has this simple language: The President, Vice President and all civil Officers of the United States, shall be removed from Office on Impeachment for, and Conviction of, Treason, Bribery, or other high Crimes and Misdemeanors.

The current complaint alleges that President Trump tried to withhold federal funds from the Ukrainian government in exchange for compromising information on former Vice President Joe Biden, one of his top Democratic presidential rivals in 2020, and his son Hunter. This would constitute bribery if proven to be true. Trump on Wednesday released the transcript of a call with the president of Ukraine which does not explicitly mention the withholding of funds. As one of the “high crimes and misdemeanors” listed in the Constitution, this alleged bribery could lead to the president’s impeachment.

Specifically, the term refers to the drawing of charges against the president by the House of Representatives, which is like an indictment. Impeachment has only occurred twice in American history against Presidents Bill Clinton and Andrew Johnson. President Richard Nixon avoided impeachment by resigning before the House took action.

Usually, impeachment proceedings start with the House Judiciary Committee, which will investigate the impeachable offense and recommend articles of impeachment to the full House if it is justified. The House then votes on the articles and requires a simple majority to move forward.

From there, the U.S. Senate holds a trial presided over by the chief justice of the Supreme Court. The proceedings mirror that of a criminal trial, during which the defense and prosecution can call witnesses and the Senate fills the role of the jury. To remove the president from office, the Senate needs a two-thirds majority vote.

Bill Clinton was impeached over obstruction of justice and perjury in relation to his alleged sexual impropriety. George W. Bush faced numerous articles of impeachment over a variety of subjects, ranging from his conduct of the Iraq War and his response to Hurricane Katrina. Obama also faced partisan calls for impeachment over the place of his birth and the Benghazi attack. It’s not uncommon for lawmakers hostile to the president to draft articles of impeachment during a controversy.

The allegations against President Trump are substantiated by both the whistleblower complaint and a transcript of a phone call between Trump and the president of Ukraine. The whistleblower, who is currently anonymous, is likely a member of the U.S. intelligence community who filed a complaint in August regarding Trump’s conduct with Ukraine. The complete complaint is scheduled to be released by the end of the week.

Both of these documents allege that Trump withheld funds from the Ukrainian government as leverage to get information on  Biden. If true, this tangible evidence is stronger than any piece of evidence used in impeachment efforts against Bush or Obama.

As it stands, the Democratically-controlled House is only in the early stages by launching the inquiry. However, the push by Pelosi for impeachment is a major development, as the Speaker has been hesitant to support the motion in the past. Since the House is controlled by the Democrats, a vote on impeachment would almost certainly pass.

However, assuming members of the Republican-controlled Senate would vote on party lines if a trial occurred, Trump could not be removed from office. Also, the Senate is responsible for drafting rules for the proceedings, meaning a savvy GOP senator could create rules that undermine the proceedings before they begin.

Another problem facing House Democrats is how impeachment could shift public opinion before the crucial 2020 election.

Following the 1998 House vote on impeachment against Clinton, the president’s approval rating rose 10 points and the public’s perception of the Republican Party quickly declined. If history were to repeat itself, the strategic move to impeach Trump could negatively effect Democratic chances in 2020 and lead to a second term for the incumbent president.