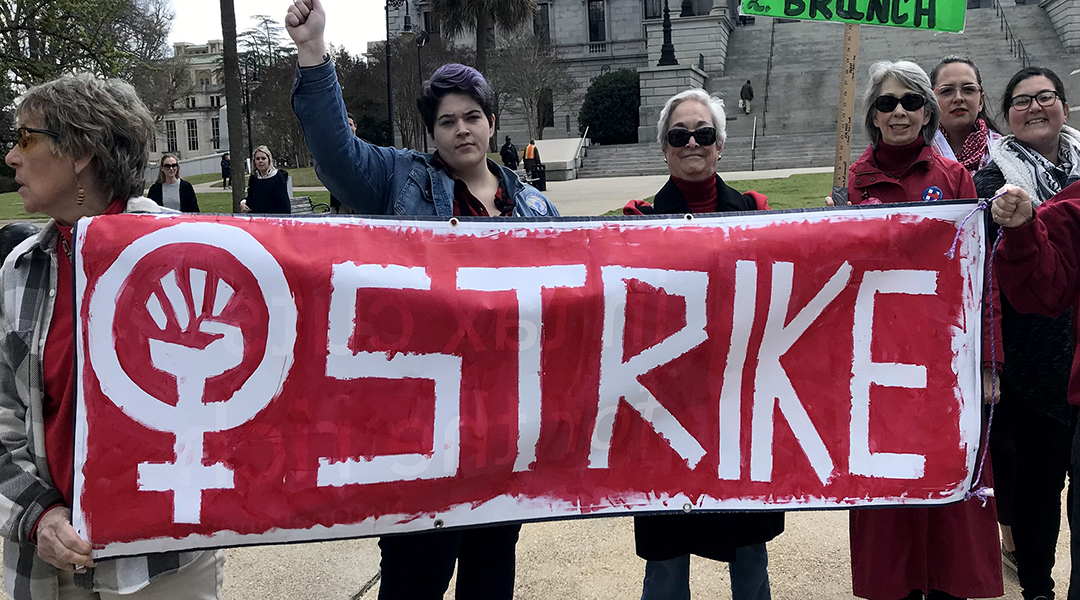 Members of Indivisible Midlands brought a banner from the protest a year ago, where many women went on strike for a day in protest of the administration of President Donald Trump. 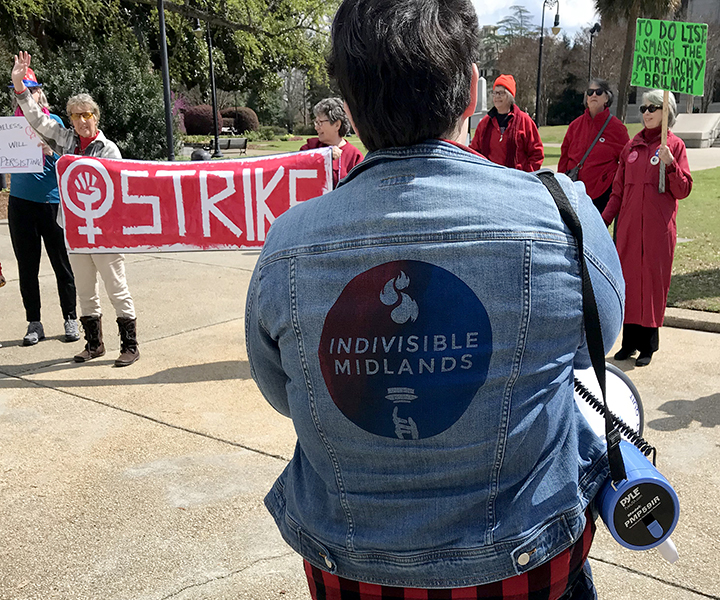 Indivisible Midlands members say they stand for protecting the most vulnerable members of the community from policies that they see as oppressive and regressive. 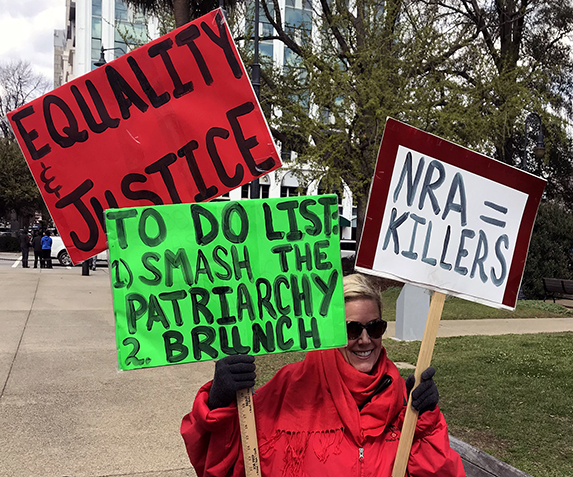 Nancy DeSisto is one of the cofounders of Indivisible Aiken, but is not originally from South Carolina, and sees the embrace of tradition holding the state back. 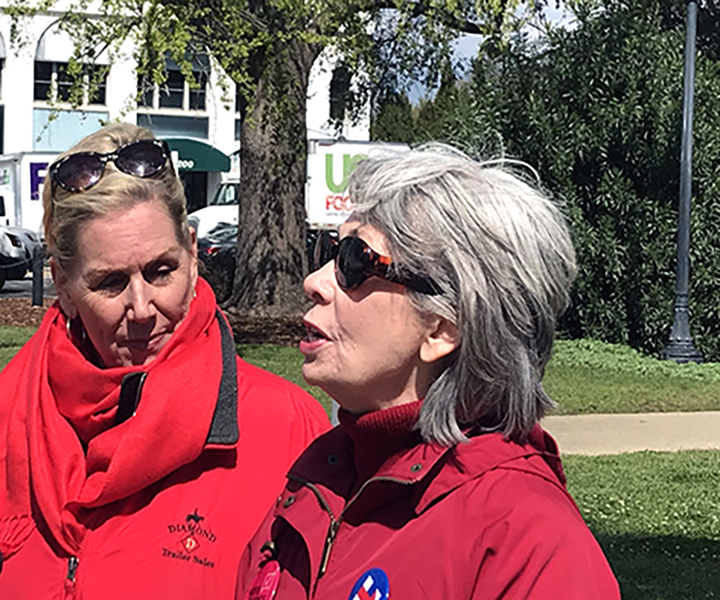 Karin Sisk, a teacher and cofounder of Indivisible Aiken, is very dismayed by the lack of attention given to children and education specifically. 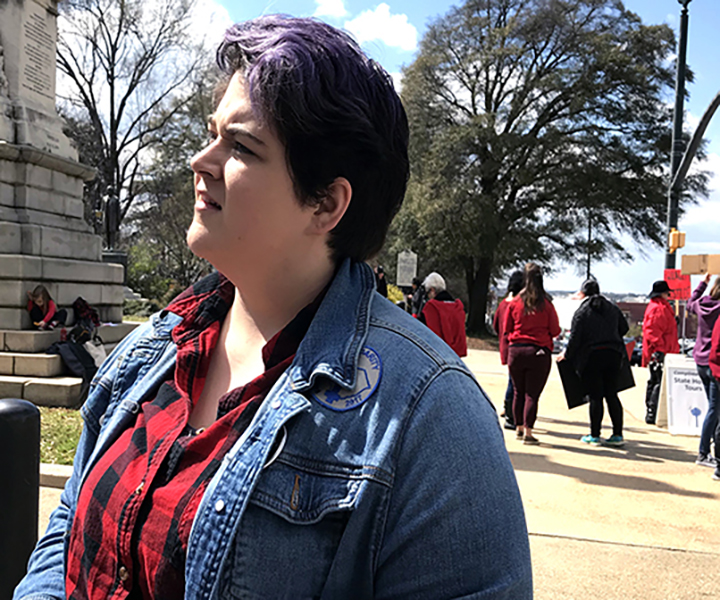 When asked what specifically Indivisible Midlands is fighting, co-director Sam Edwards said “In terms of legislation, it all has to do with white supremacy.”

International Women’s Day sparks activism each year around the United States, and Indivisible Midlands, a Columbia grassroots movement, held a protest at the State House on the one-year anniversary of its inception.

Indivisible Midlands is a chapter of Indivisible, a national progressive movement initiated in 2016 as a reaction to the election of Donald Trump as president of the United States. The organization is committed to increasing voter participation in S.C.’s Second District, and resisting the Trump agenda.

“Our first year has been a very interesting time in America,” Edwards said. “I think we have had a successful year in terms of letting our representatives know we are here. Progressive women who want equality are in their districts.”

Indivisible Midlands held a strike last year, a part of the “Day Without a Woman” protest around the world. This year its demonstration did not include a strike, but participants came equipped with signs, posters and a megaphone and set up in front of Gervais Street.

Last year’s focus of the International Women’s Day protests was the Trump administration and its policies. While Trump is still is in Indivisible’s sights, the anger this year was focused mainly on state issues. Nancy DeSisto, cofounder of Indivisible Aiken, is particularly frustrated with the proposed “Personhood” amendment in the S.C. House of Representatives.

“You have someone like State Senator (Richard) Cash up there talking about how it’s his personal crusade,”  DeSisto said. “Nobody cares about your personal crusade. This is not about personal crusades. It’s about the people who live here, all of them.”

DeSisto and fellow Indivisible Aiken founder, Karin Sisk, are also concerned with the idea of arming teachers in the wake of the Parkland, Florida, shooting. Sisk is a teacher and personally doesn’t think having a gun would make her feel safer in school.

On Indivisible Midlands’ first birthday, most members said they felt optimistic for upcoming elections. Sisk referenced the “blue tsunami” predicted for Democrats in the mid-terms and said she and DeSisto make it their mission to be voter registration tools at every event they attend.

Sam Edwards also sees reason to be excited for the future. She mentioned collective calling as one of the most effective methods Indivisible Midlands employs.

“If we can get everyone to call on an issue that’s good. Public officials aren’t having town halls anymore because they know we’re going to be there,” Edwards said.

Even though the group outside got many honking car horns in support, not everyone finds the protest impressive.

“There weren’t even 20 people out there,” said William Mitchell, a contractor from Aiken. “I drove by there and had to laugh because I thought people were honking for a big bunch of folks.”

Mitchell, who had never heard of Indivisible or Indivisible Midlands, also takes issue with the hostility that protests like the ones on International Women’s Day show towards white males.

But members of Indivisible Midlands are not interested in making concessions on their requests.

“A man that is a real, quality guy is not freaked out by equality,” DeSisto said. “We don’t want superiority, we want equality.”