It’s Boring but that’s what makes it cool 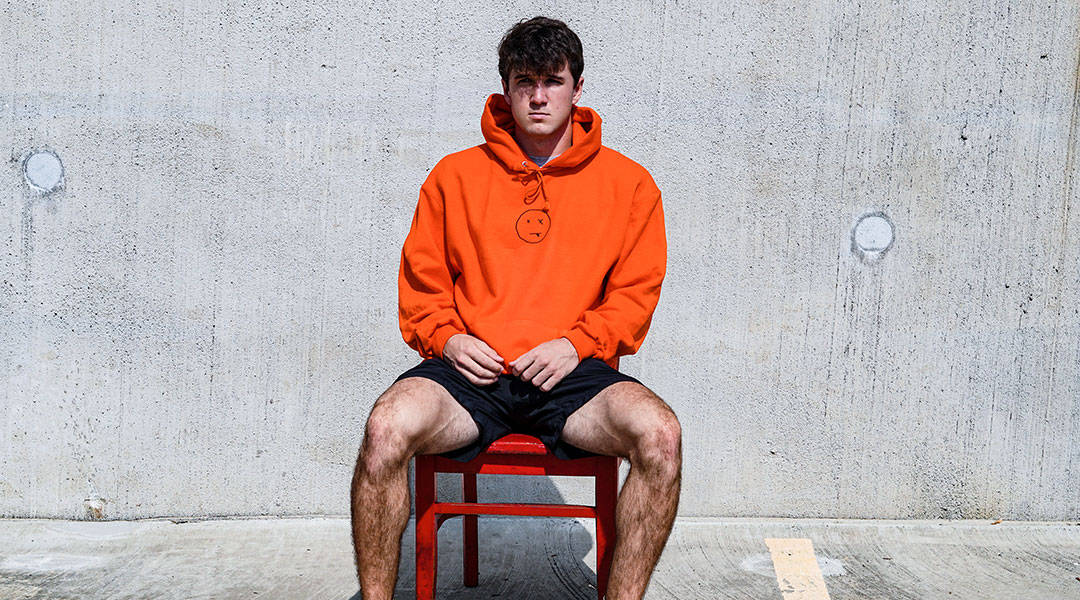 CLOVER, S.C. – Adam Allen meanders through his childhood home and takes the stairs, two at a time, up to the family bonus room – a hybrid of a fraternity house, studio and warehouse.

The room above the Allen family’s garage is the headquarters of Boring Cloth, a clothing brand whose designs are inspired by what Allen describes as “21st century culture.” In November 2018, during his senior year of high school,  Allen, then 17, founded the company.

One half of the room is set up for photoshoots, with studio lights casting down on an 8-foot-tall white, vinyl backdrop.

The other half of the room is where every order is fulfilled. Two free-standing steel racks hold blank merchandise – hoodies, T-shirts, crewnecks, windbreakers, and swim trunks.

Three desks support the equipment needed to print designs onto blank merchandise, including a desktop computer, a printer used specifically for printing on fabric, a heat press, and a sewing machine.

“Modern, simple, subtle, culture,” Allen, who often sports his own designs, says. “Those are four words that wrap it up.”

Allen designs simplistic, retro graphics. Boring Cloth’s most popular piece is a hoodie with a rough outline of Charlotte’s skyline. Other popular designs include T-shirts and hoodies with the numbers “704” or “803” – two area codes for Charlotte and its surrounding South Carolina towns. The brand is reasonably priced, ranging from $15 for a T-shirt and $36 for a hoodie. 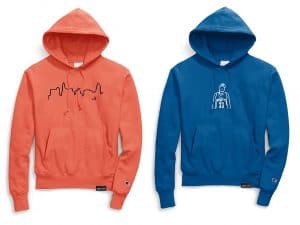 Ariana Donaldson, a senior at Clover High School, says her “CLT” hoodie is the most comfortable sweatshirt she owns. Donaldson says she loves Boring Cloth because Allen “does it all himself and really cares about quality and satisfaction.”

Allen doesn’t manufacture his merchandise. He buys blank garments from brands like Champion and then designs the graphics and prints them onto the garment.

While he designs and creates the graphics for his clothing, Allen says he doesn’t like to call himself an artist.

“I just have ideas,” Allen says. “I call myself an idea-ist.”

Allen cranks up his desktop computer.

He’s got his work cut out for him.

From beginning to end – printing to preparing for shipment – the process can take anywhere from 5 to 30 minutes per piece. He’s looking at anywhere from 25 to 150 hours to wrap up this order.

Simple designs, like Boring Cloth’s classic “cross hoodie” – a hoodie with a small cross – run through the printer quickly. More complex designs, like the “baby hoodie” – which features a sketch of Charlotte rapper DaBaby – take longer.

How Boring Cloth came to be

Allen decided to start Boring Cloth after he jokingly drew a small sailboat on the front of a plain Walmart sweatshirt.

“I think I was listening to Lil Yachty, just doodling,” Allen said.

Allen wore the sweatshirt to school the next day and got a lot of compliments from his peers, which he said was unusual. “I might’ve gotten a compliment on my shoes every once in a while, but never on clothes,” Allen said.

Allen posted a picture of it to his Snapchat story and within a couple hours someone had asked to buy it from him. “I couldn’t believe he offered $45,” Allen said. “I was like, ‘You can’t tell I drew this with a Sharpie?’”

Allen said he always wanted to start a clothing brand. “I wanted stuff on clothes that nobody had,” Allen said.

He got to work, spending his evenings designing graphics and brainstorming.

He knew he wanted to keep his designs simple because that was the style that most appealed to him. Now he just needed to think of a name that best defined his brand.

He said he thought to himself, “What about Boring Cloth? It’s not very flowy, but it’s a cool way to describe simple designs and it could be such a conversation starter.”

Within a couple weeks, Boring Cloth was up and running out of the bonus room above the family’s garage.

Allen’s original mission was “to give people a way to wear and express their culture, ideas, and values, especially in the Carolinas.”

Sales were slow starting off. “I got a few orders every couple of weeks,” Allen said.

Since its launch, Boring Cloth has made 1,600 sales. Allen’s mission has not changed, but his reach extends beyond the Carolinas.

The brand’s website, boringcloth.com, includes a widget that shows what items have been added to someone’s cart and in what city. Boring Cloth has buyers from British Columbia, Canada, to Queens, New York, to Los Angeles.

Noah Lalli, a friend of Allen, was by his side when he decided to start Boring Coth. Lalli said he knew Allen’s brand would take off. “His designs are simple and intriguing, a lot like Supreme,” Lalli said.

Supreme is a luxury brand whose designs have a similar feel to Boring Cloth’s. “I knew people would see that brand association and want to buy his stuff,” Lalli said.

Allen has seen a huge spike in sales since he started promoting the brand on TikTok. After posting the first one on Feb. 22, which has now received over 239,000 views, he received 300 orders over night.

He says the orders have continued to flow in.

“Honestly, I haven’t really felt like I was running full speed until now,” Allen said. “Now I’m just like ‘Damn, I’ve really just been screwing around.’” 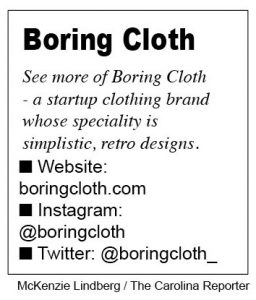 The collaboration was a way to help promote both brands, and did so by creating a design that was featured on a hoodie. The “BORINGCLOTH x CHUBBA VINTAGE” hoodie, which depicted a retro arcade machine and both brands’ Instagram handles, was available for a limited time.

Allen is excited about an opportunity to collaborate with Five Oh, a local skate shop in Fort Mill.

In the near future, Boring Cloth will launch a hoodie design that features a simple skateboard graphic and the phrase “BORING CLOTH x FIVE OH.”

Tylor Navai, the manager of Five Oh, said partnering with Allen and his brand was a “no brainer.”

“I met him and I was like ‘This kid is determined as hell,’” Navai said. “We do what we can to help others and if we can partner with him to bring attention to his brand and to our shop, it’s a win win.”

Mike Allen, Adam Allen’s father, is proud of his son’s success. “He’s always been entrepreneurial, so I wasn’t surprised when he came to me with this idea,” Mike Allen said.

Mike Allen said he and Adam’s mom gave up the bonus room to Adam and his brother, Eli, many years ago. “That’s always kind of been their hangout spot, so we don’t really miss it.”

Allen is hoping to move Boring Cloth out of his family’s bonus room and into a rented warehouse space in the next year. He feels he spends majority of his time printing and fulfilling orders. He wants to hire a part-time employee to help with printing so that he can invest his time “where it really needs to go, like creating new designs and networking.”

Until then, the Allen family’s bonus room will remain Boring Cloth’s headquarters. 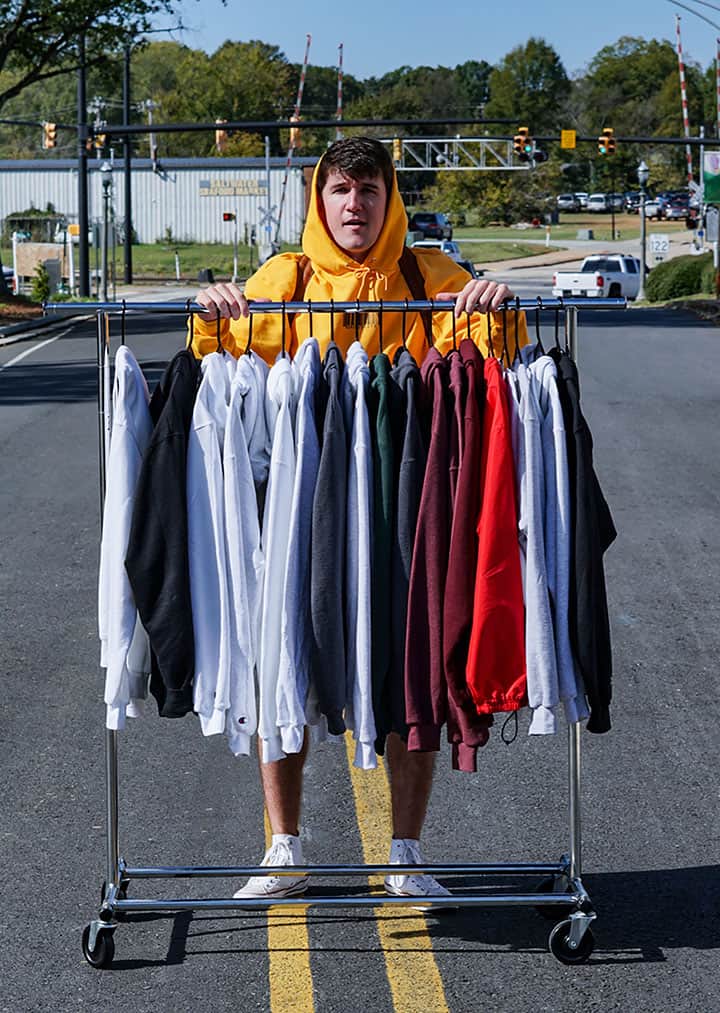 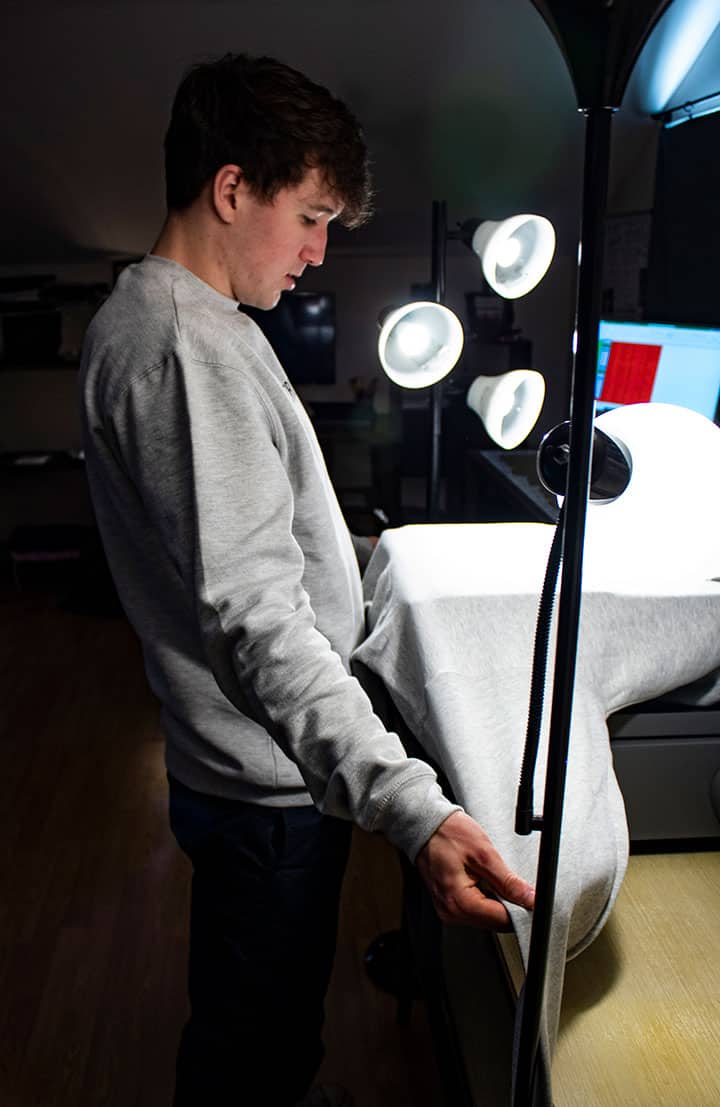 Allen uses an industrial size fabric printer to print all of his designs onto blank merchandise. 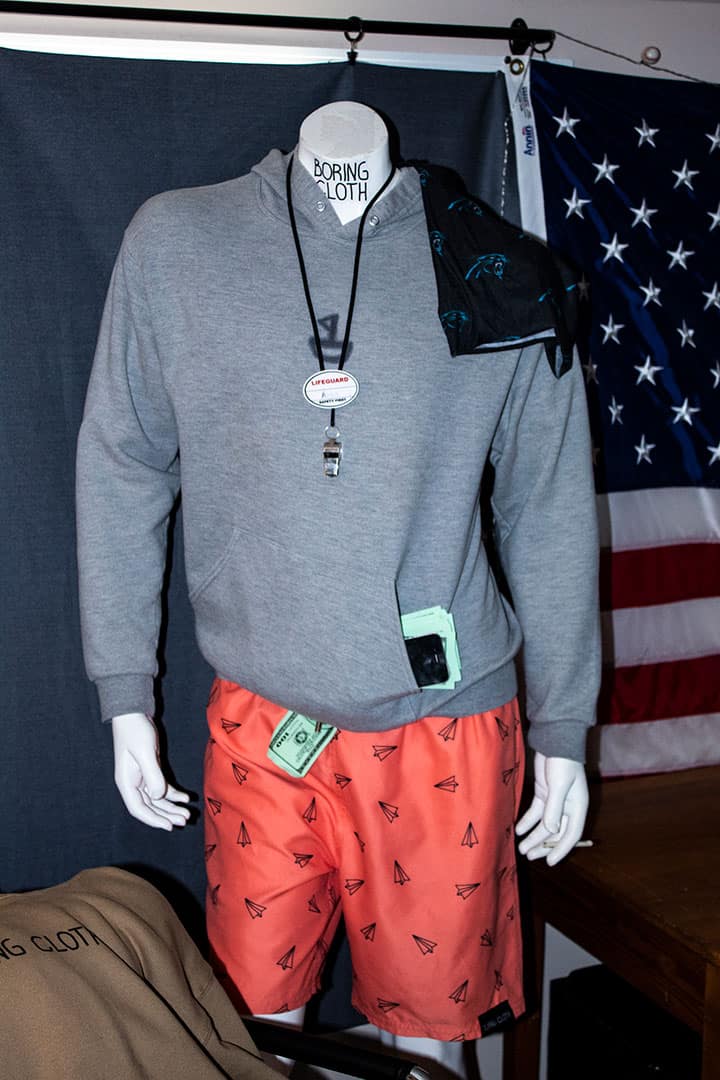 During his senior year of high school, Allen drew a sailboat with a Sharpie onto this Walmart hoodie – which ultimately inspired him to create Boring Cloth. He has it displayed on a mannequin inside his studio. 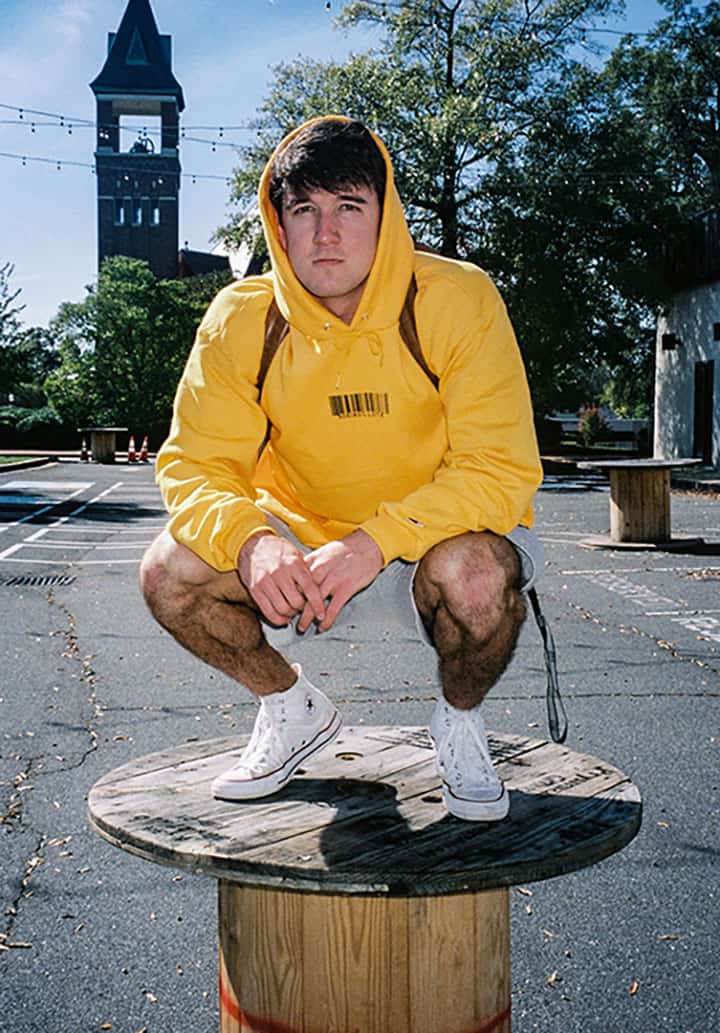 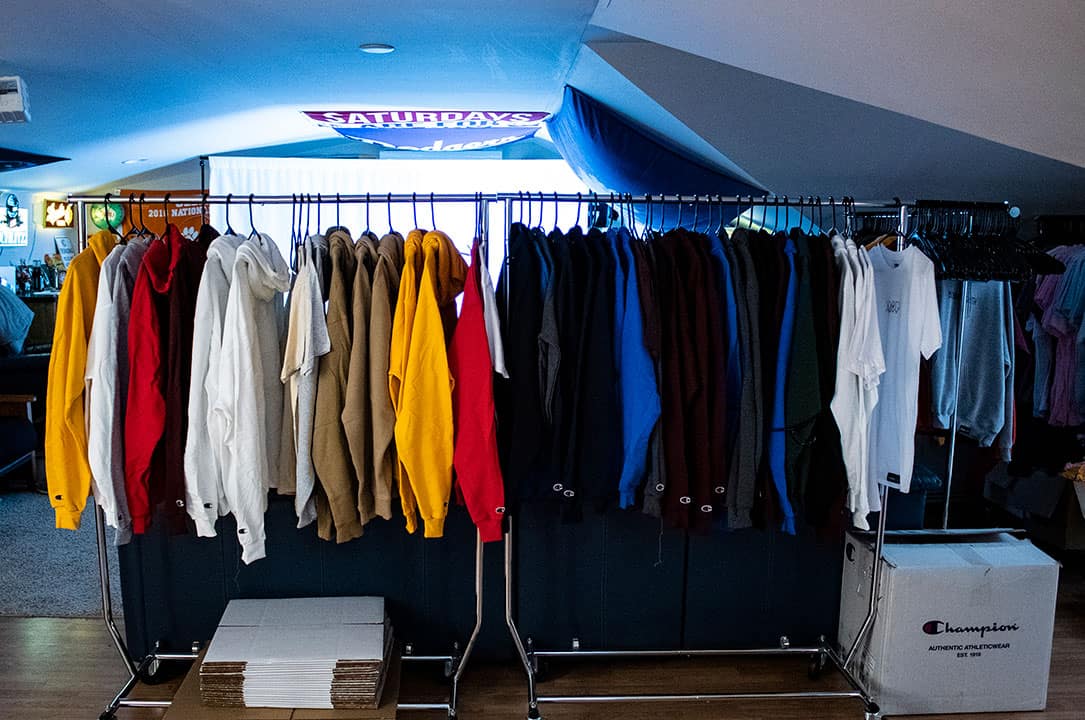 Allen often uses the popular clothing brand Champion to print his designs on.

“Produced, packed and shipped all from under one roof,” Allen said. Since 2018, Boring Cloth’s headquarters has been at Allen’s childhood home. 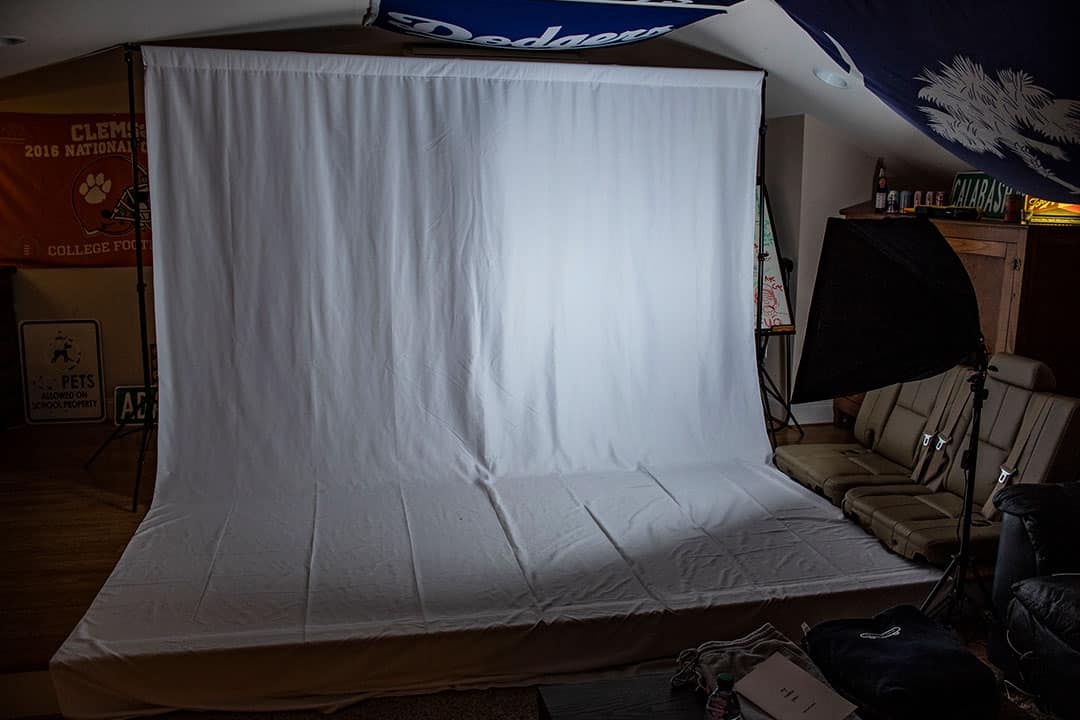 Allen bought a vinyl backdrop so that he could shoot promotional photos inside his studio. 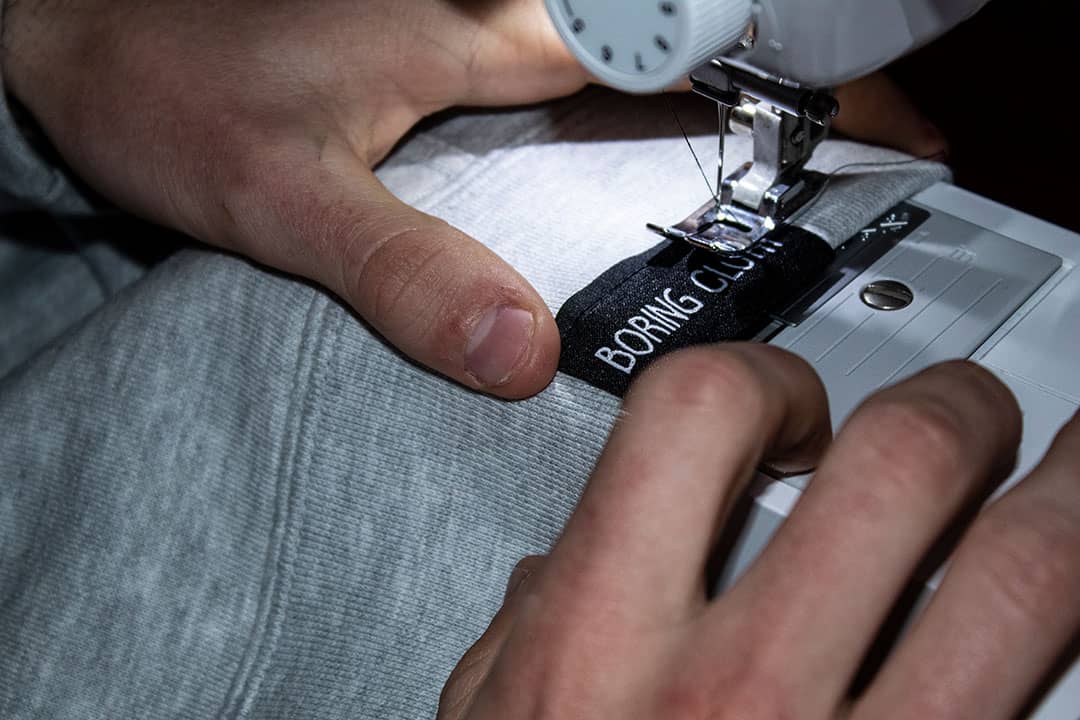 The final step in the production process is sewing on Boring Cloth’s signature tag, which Allen does himself using a sewing machine.