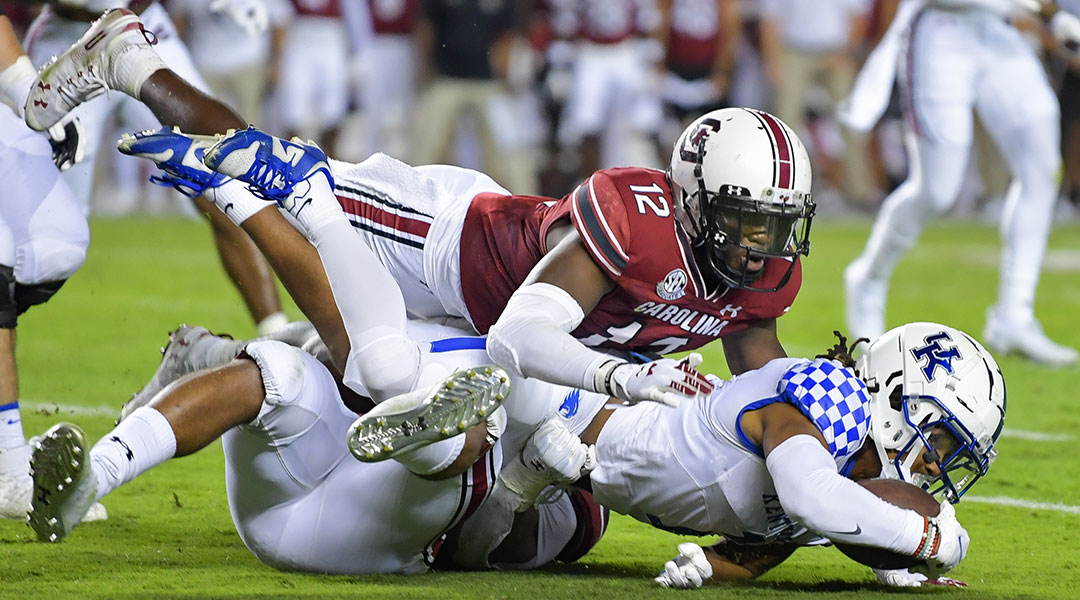 Redshirt senior defensive back Jaylan Foster chases down and tackles a Kentucky ball carrier. Foster ended the game with 12 tackles, one short of his season high of 13 against Tennessee. Photos courtesy of SEC Media Portal

Jaylan Foster, a redshirt senior defensive back for the Gamecocks, is one of two safeties that has been named to the Sporting News Midseason All-America team. He was selected alongside Kyle Hamilton, a junior at Notre Dame.

Foster, the sole Gamecock selected, has had breakout campaign so far in 2021 leading to national recognition as one of the top defensive backs in the country.

The South Carolina defense finished the 2020 season ranked 105th in the country in total defense and were able to force only eight turnovers through ten games. Despite offseason doubts surrounding the Gamecock secondary, Foster alone has forced six turnovers through seven games, leading the group to a strong 2021 campaign.

All along, Foster has remained confident in both himself and his teammates.  “You always hear the noise,” Foster said in a preseason press conference, but he has proven those voices wrong so far this season.

As a defensive unit, the Gamecocks currently rank third nationally with 16 turnovers, including eight interceptions. This puts them in a tie for the most in the SEC with Alabama.

Foster has been a big contributor to the high volume of turnovers, intercepting four passes and forcing two fumbles through the first seven games.

His four interceptions lead the SEC and have him locked in a six-way tie for most in the country.

In a press conference after the Georgia game where he intercepted two passes, Foster attributed the defense’s early success to the coaching staff. “We just trust and believe in the coach’s plan,” and “come out and try to execute it,” he said.

“This wasn’t the deepest room coming into the season,” said defensive coordinator Clayton White in a press conference after the Vanderbilt win, adding that he has been impressed with the group’s play as a whole.

In his first year with the Gamecocks, the team ranks 34th in the nation in total defense.

The big statistical bump for the Gamecock defense is in no small part due to the Midseason All-American’s breakout season. He played in eight games in 2020 with 43 tackles and zero turnovers forced.

Through seven games in 2021, he has 58 tackles and is tied for the most interceptions in the country.

White attributes Foster’s success this season to his precision and focus on every aspect of the defense.

“He does a really good job of the details,”  White said following the Georgia game. 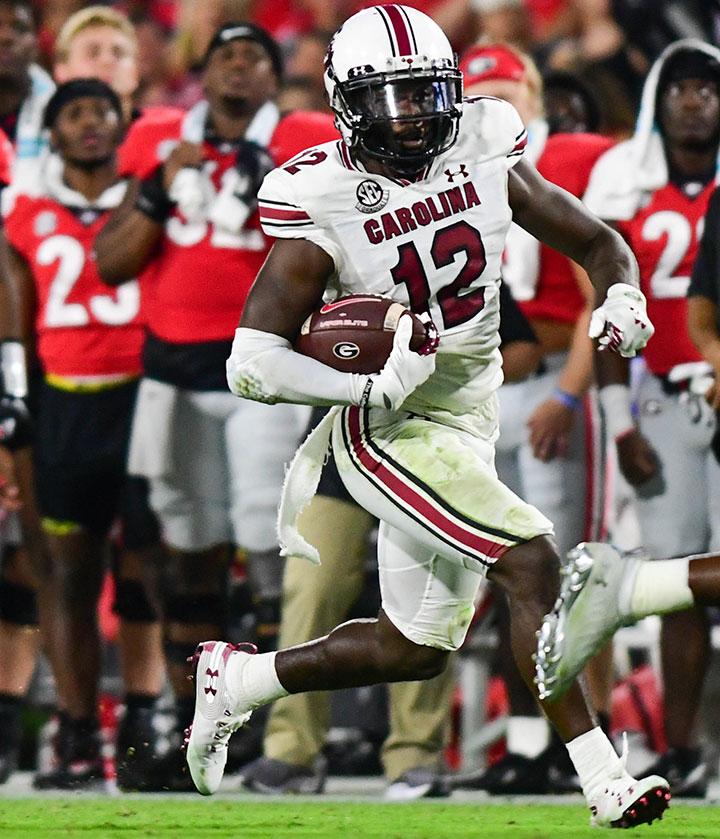 Foster returns one of his two interceptions against the Georgia Bulldogs. 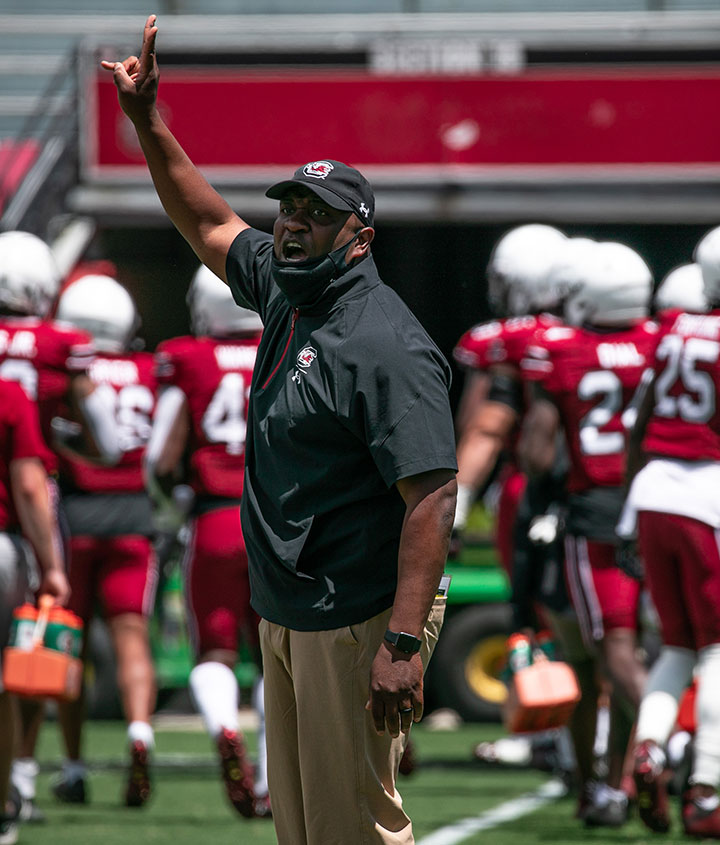 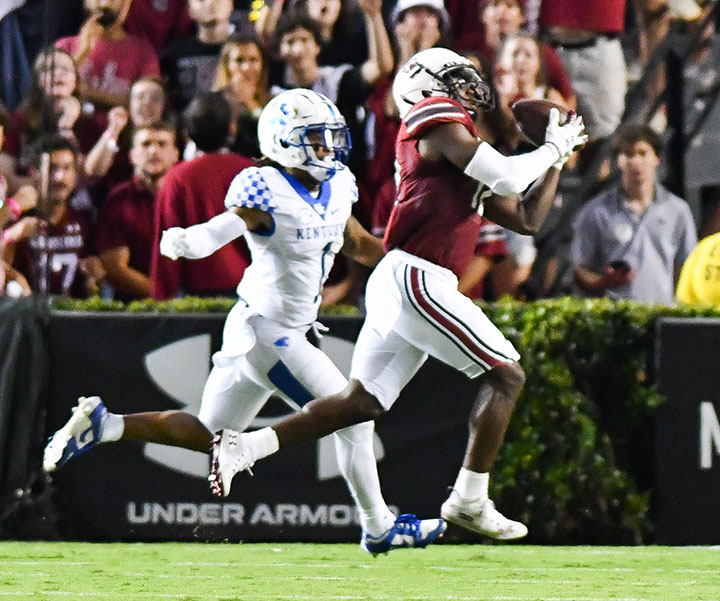 Foster records his nation leading fourth interception of the season in a 16-10 loss to Kentucky. 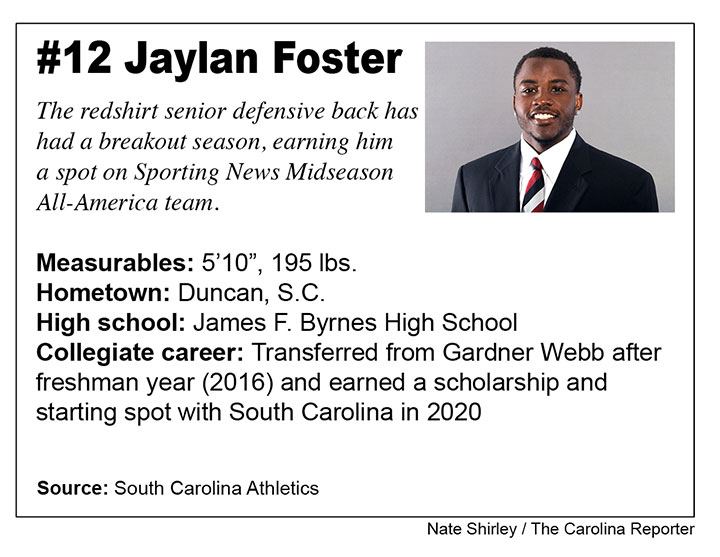