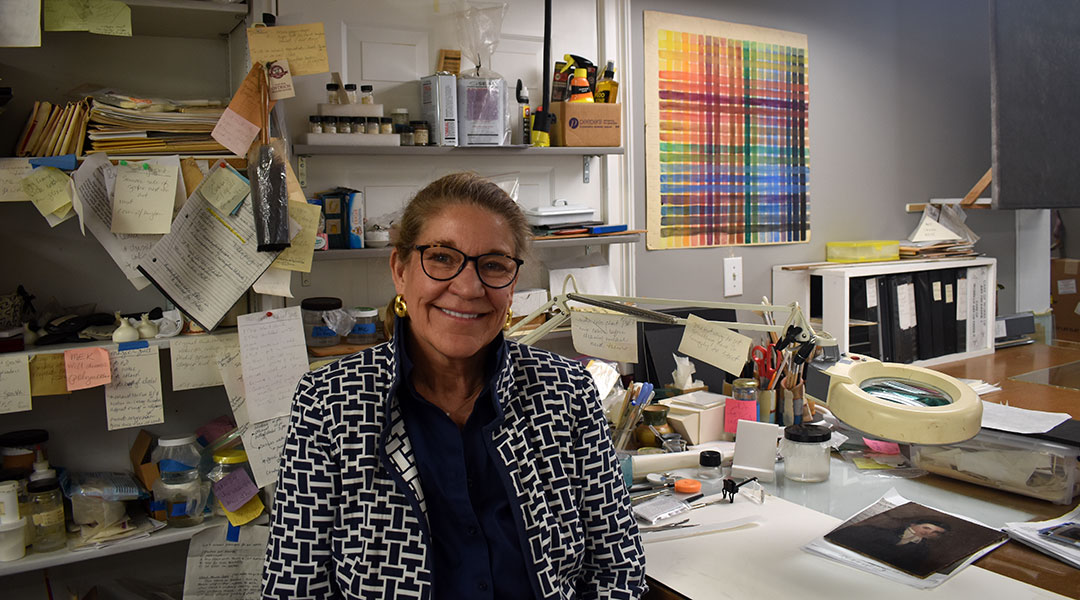 Ginny Newell has spent almost 40 years conserving 18th and 19th-century artwork since opening her business. She makes up only a handful of conservators in the Southeast. Photos by Carson Peaden.

Ginny Newell enters the belly of her shop, where paintings hug the walls. On a shelf, frames lean their weight against one another. Bottles of solvents and gels in little glass jars are stacked in rows, each labeled meticulously.

Newell prepares to tackle her latest piece. It is an 18th-century oil painting of a lush landscape with a woman sprawled across the bottom, staring into the distance. The paint is faded and flaking, and there are visible tears in the canvas. It will probably take her and her team weeks to conserve it to its original state.

Newell founded her Columbia firm, ReNewell, Inc. in 1983, specializing in the conservation and restoration of 18th and 19th-century oil paintings and art on paper. The company’s commissions from private clients or museums range from New York to Florida. She makes up one of only a handful of conservators in the Southeast.

Growing up in a creative family in North Carolina, Newell was surrounded by the arts. Her father was a skilled photographer and eventually passed his knowledge onto her. He also enjoyed woodworking, and she grew up working alongside him, learning precision and coordination with her hands.

“He influenced me without knowing he was influencing me,” Newell said.

In the late 1970s, she attended Davidson College, where she originally planned to study to be a doctor. After enrolling in an art history lecture, light bulbs flickered in her head. She fell in love with the way paintings could tell an entire story – not only of the image itself but also the economics, religion and culture of its time.

Even when she switched from a medicine to an artistic track, both of her parents were supportive of her dreams.

“The reason I believe I’ve been successful, when I started this so young, was because no one ever told me I couldn’t,” she said. “It just never dawned on me.”

After graduating with a bachelor’s degree in art history, she worked for an art gallery in Columbia. When paintings came in for repair, she became obsessed with learning how to do it herself. Since then, she has garnered an impressive résumé. She has apprenticed with master conservators and completed conservation studies throughout Europe and America. Along the way she has restored hundreds of pieces.

Newell is a founding member of Southeast Regional Conservation Association, which gathers annually for workshops and conversation with other experts. Even now, she takes refresher courses to stay up-to-date on conservation.

By the 1990s, Newell owned and operated two businesses: ReNewell, Inc. and Morris Gallery. The latter, now closed, was named after her father.

When the conservatory first opened, she traveled to every art event in South Carolina in order to meet people, shake their hands and put a face to her work. Through word of mouth, she established a loyal clientele.

Over the years, she has taken on a handful of interns. Some barely lasted a week.

It takes the right temperament and patience, Newell said, especially since there is no immediate gratification in the process. She estimated that even if she spent all her time on only one work of art, it would take anywhere from two to six weeks. She works on multiple paintings because, throughout each step, the painting needs time to dry.

“The paintings get tired. You let them rest,” she said. “Everything about them is organic. And so they live and breathe and get tired.”

The Columbia Museum of Art charged her with fixing a pastel portrait by Henrietta Johnston, who is considered America’s first professional female artist. It was a special opportunity for Newell to work on one of her pieces because her artwork is hard to come by. In a short time frame of two weeks, Newell completed its conservation. She considers this her most significant work.

While conservators work closely with artwork each day, breathing life into the canvas, they aren’t to be mistaken with artists, Newell said.

“Artists are creative. Conservators are charged with returning the art to its original integrity, if possible,” she said. “We don’t enhance, we don’t change. We just get it back to where it was.”

Conservation, a blend of science, art history and studio art, is a relatively new profession, with the field only expanding in the 20th century as techniques improved. The job requires precision, focus and manual dexterity. There is no room for error. While each piece might be damaged in similar ways, every issue is unique.

“What I’m doing all day long is problem solving,” Newell said. “You have to be able to think critically, step by step. You have to foresee issues that could happen and be prepared for them. You have to know what you can’t do.”

Like all professionals in the field, conservators follow a code of ethics, which includes two key tenets concerning the proper care of artwork: First, do no harm, and second, make all treatments as reversible as possible.

Typically, artwork requires conservation due to age or natural disasters, such as humidity, which is more prevalent in the South. Sometimes, the problem is the result of previous restorations. These can be the trickiest to fix.

Contemporary paintings are also more difficult to conserve because most artists don’t use techniques to make them last, which is why ReNewell, Inc. mainly works with art from the 18th and 19th century.

Newell’s team currently consists of Jeff Donovan, who has worked with her for more than two decades and Laura Garner Hine, who joined them a couple years ago. Hine specializes in framework but is experienced in all stages of conservation.

“She’s very driven,” said Hine, who hopes to take over the business one day. “It’s the best work environment I’ve ever been in. I look forward to coming to work every day.”

Newell works long hours, but says she loves every minute of her job – except, maybe, the paperwork.

“It’s been a highly rewarding profession,” she said. “I was meant to do this.” 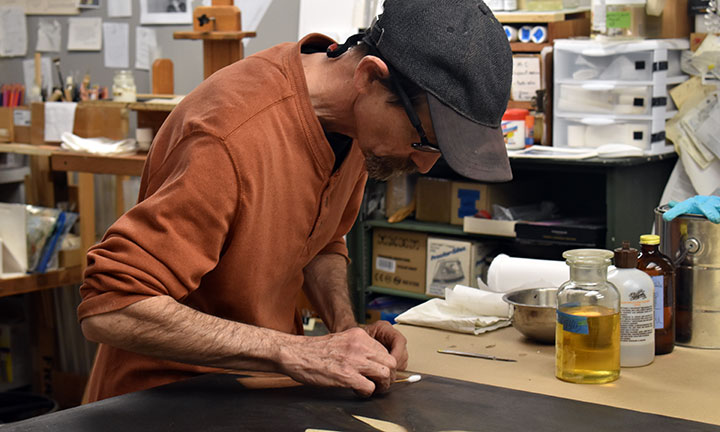 Jeff Donovan, who has worked at ReNewell, Inc. since its opening in 1983, is currently working on an oil painting from one of their latest clients. 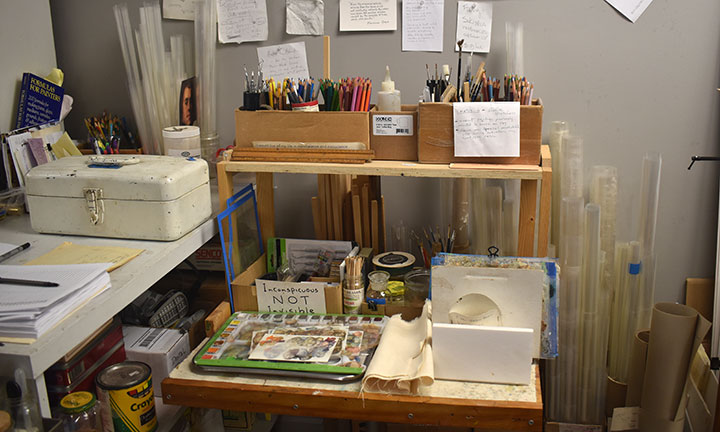 The field of conservation combines science, art history and studio art. Conservators must be precise, focused and have great manual dexterity. 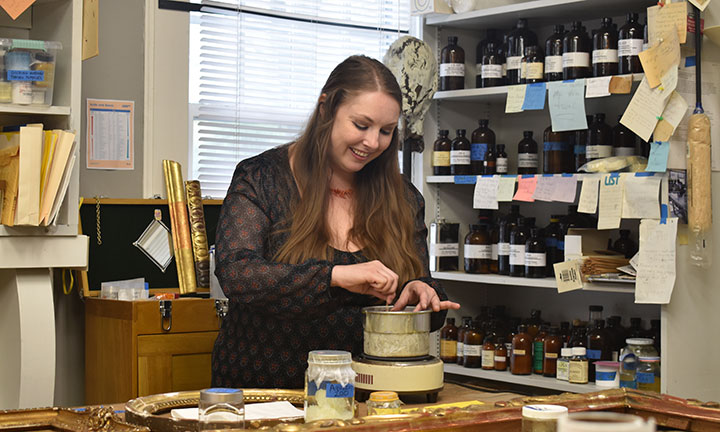 Laura Garner Hine, the latest to join the conservatory, specializes in the restoration of frames. 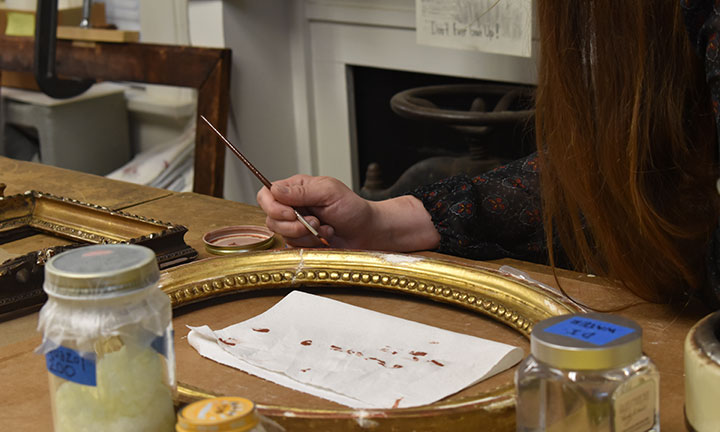 Hine likes to call frames “the unsung heroes” because they both visually complement the artwork and also protect it. 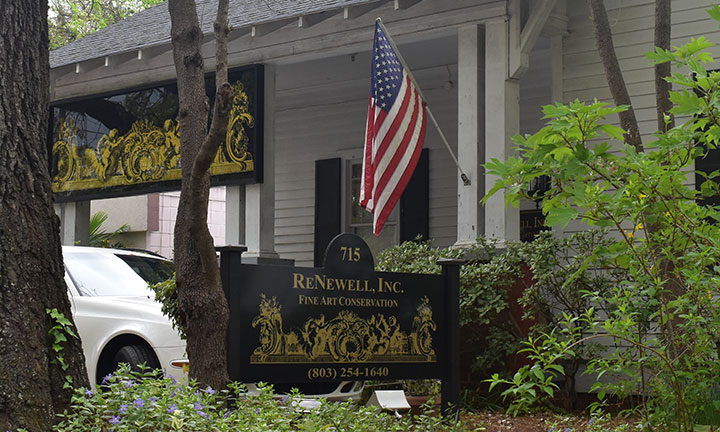 Located at 715 Woodrow St., ReNewell, Inc. specializes in the conservation and restoration of 18th and 19th century oil paintings and art on paper. 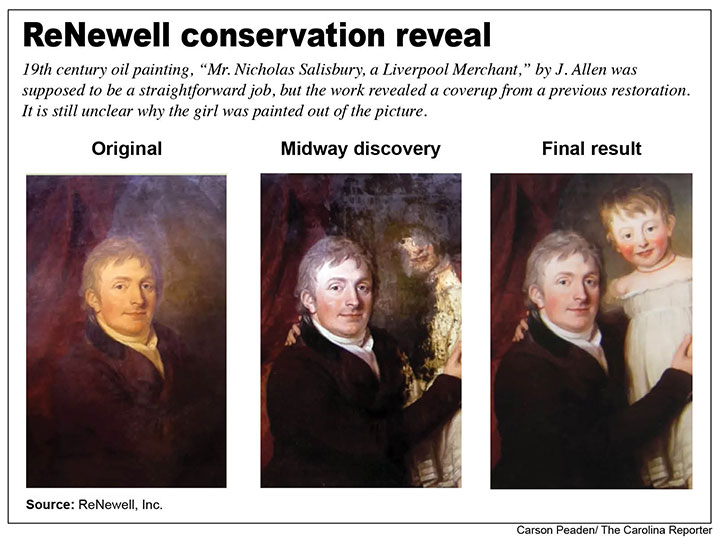