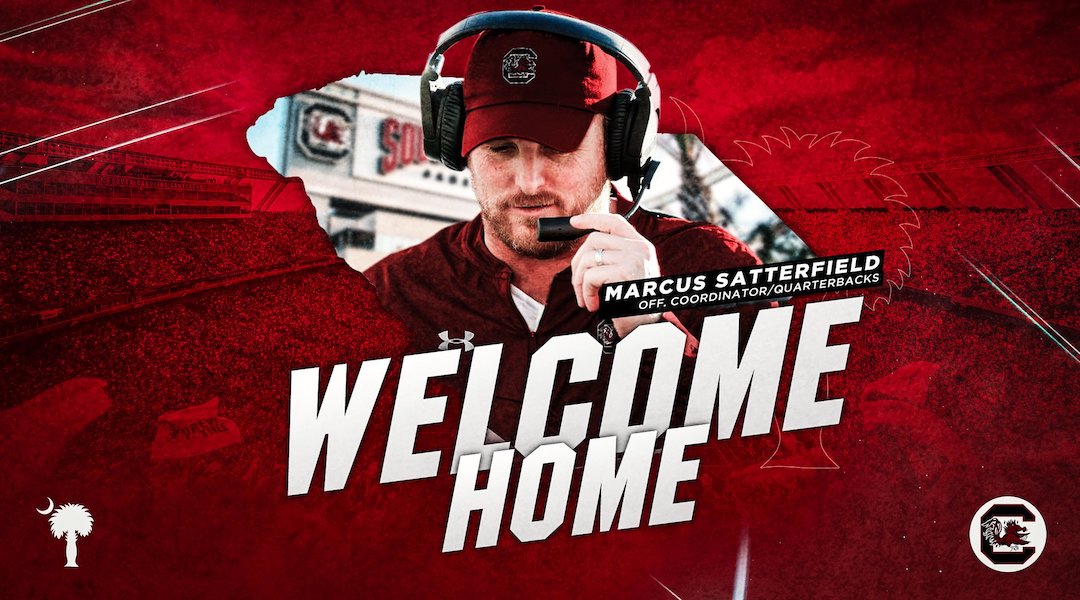 Marcus Satterfield is approaching his third month as offensive coordinator of the South Carolina Gamecocks after leaving his coaching role with the Carolina Panthers. Photos courtesy: South Carolina Athletics

The former Carolina Panthers assistant offensive line coach – respected on and off the field – is no stranger to strengthening football programs either, leaving his past ventures in a better place than when he arrived.

“Marcus was instrumental in rebuilding two championship college programs with me at both Temple and Baylor,” Panthers head coach Matt Rhule said in an interview with South Carolina athletics. “I think South Carolina is getting a tremendous offensive mind who will help build them into a perennial contender.”

The relationship between head coach Shane Beamer and Satterfield dates back 18 years when they were both graduate assistants for Tennessee. Even then, Beamer recognized Satterfield’s potential.

Beamer had an unexpected vacancy open up just a month into the new UofSC job when former offensive coordinator Mike Bobo left for a job at Auburn.

Bobo’s exit may have been a blessing in disguise, as Beamer knew he had the right man for the job lined up.

“Marcus was someone that I always had in mind, that I always knew I was going to hire here at South Carolina,” Beamer said. “When the situation with Coach Bobo was resolved, that was an easy phone call to make.”

Satterfield brings professional offensive schemes to UofSC in addition to high-caliber college ones that he helped shape in his tenures at other schools.

“We’re experimenting with everything,” Satterfield said, on trying out new plays and schemes. “Everything is out on the table right now just to see what we can do.”

With the old playbook tossed out, there is room for competition at any offensive position.

“It’s cool because I don’t know who was a first-team or a second-team or a third-team [player],” Satterfield said. “So that’s been really good for us, not having a preconceived notion going into this thing.”

Going into the season without personnel expectations has fostered fierce but friendly competition amongst teammates. The mindset of “iron sharpens iron” has brought Satterfield and his players closer together.

Coaches – like Satterfield – are charged not just with the responsibility of utilizing the players they have to win, but also being a resource to help shape their futures as well.

“Marcus is there to help the players. Academically, socially, emotionally, spiritually and then football-wise as well,” Rhule said in an interview with South Carolina Athletics. “He’s going to develop young people in all areas.”

It’s clear that no matter where he is or what he is doing, Gamecock football will be on Satterfield and the other coaches’ minds at all times.

“We’ll randomly text guys Friday night, Saturday night, just to let them know, I might be with my daughter watching TV right now, but I’m thinking about you,” Satterfield said.

Whether he is at home or in the office, he wants to remain available to his players.

“He’s [an] open-door policy type of guy. He always wants you. He’s like, ‘Hey come kick it, come watch film, come learn some things,’ all the little details, everything,” said Jalen Brooks, a wide receiver for the Gamecocks.

What stuck out to quarterback Luke Doty specifically was his football knowledge, one of the many things that helped foster their strong relationship.

“He’s a really smart dude, he knows what he’s talking about and he’s a great coach,” Doty said. “[It’s] been really cool to just go in and sit down with him and just kind of talk ball. That’s something he’s about, he’s a ball guy.”

Satterfield is also a big talker, whether it be about life, football or an entirely different sport.

“I usually meet with him, on average, at least an hour or two a day, just coming up here, talking to him,” said Nick Muse, a tight end for the Gamecocks. “It’s a family-type thing. It’s a relationship-type thing. It’s not just football. It’s about life, too. Sit up here and watch some of NCAA March Madness.”

“Me and Marcus, we’ve known each other for over a decade or so,” defensive coordinator Clayton White said. “Every single defense has a plus and minus to it, and I think that what they’re doing is helping us out, becoming better.”

While Satterfield is excited to be back with familiar faces, one of his greatest influences comes from someone 13 years younger than him: Panthers offensive coordinator Joe Brady.

“I think that being with Joe [Brady] was a really good experience,” Satterfield said. “Very, very influential part of my growth as an offensive coordinator.”

While Brady was key to Satterfield’s growth as an offensive coordinator, he credits Rhule for his growth as a leader and a coach.

Satterfield brings his family, including his wife, Sarah Houser and daughter Harper to Columbia. He may just be getting settled into the city, but he hopes to find success in line with his mentors and Panthers coaches Matt Rhule and Joe Brady.

“I think first, last and foremost is the fact of how much I’m going to put into this and make sure the University of South Carolina Gamecock fans are going to be proud of the product that’s on the field,” Satterfield said.

Although Satterfield has been on the job for months, he hasn’t fully experienced the city of Columbia as much as he would like due to the pandemic.

“I think it’s unbelievable, I’ve never heard this many people brag about a city,” Satterfield said. “I’m anxious to get out in the River Walk and get to Five Points when everything clears up, take my family around, go for walks. Can’t wait to absorb ourselves in the city for sure.”

Win or lose, he hopes to bring an exciting brand of football to Columbia that the Gamecock faithful will get behind. 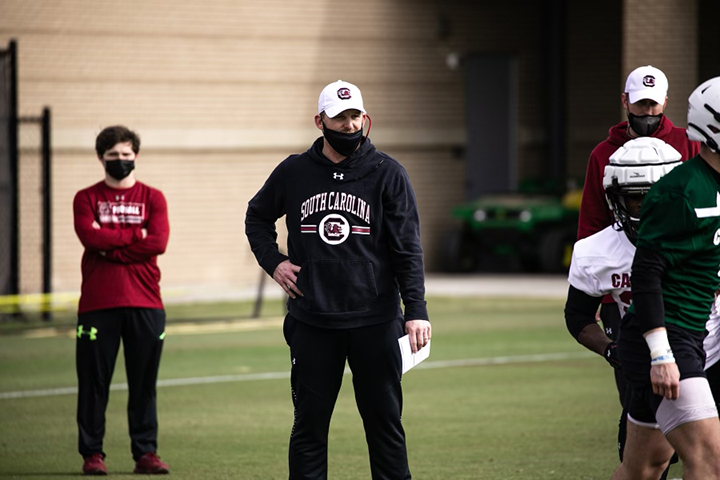 Satterfield is coaching an offense that focuses on creating explosive plays, scoring touchdowns in the red zone and playing clean football. 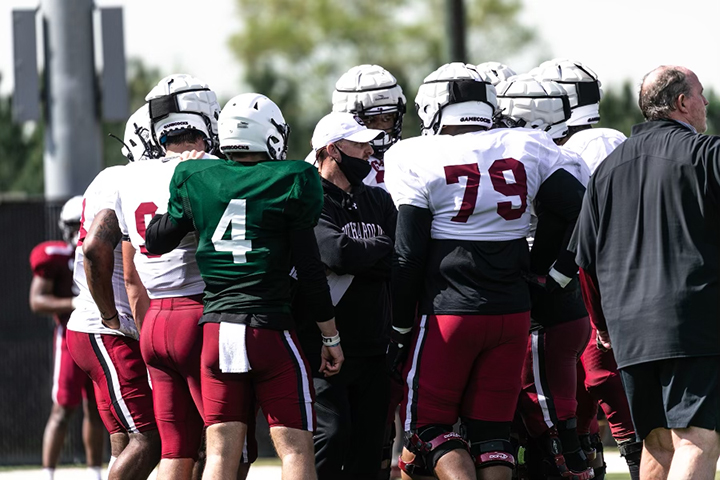 Satterfield is deeply involved with his players’ growth everywhere, knowing “the only way you’re going to have success is if we’re in this thing together.” 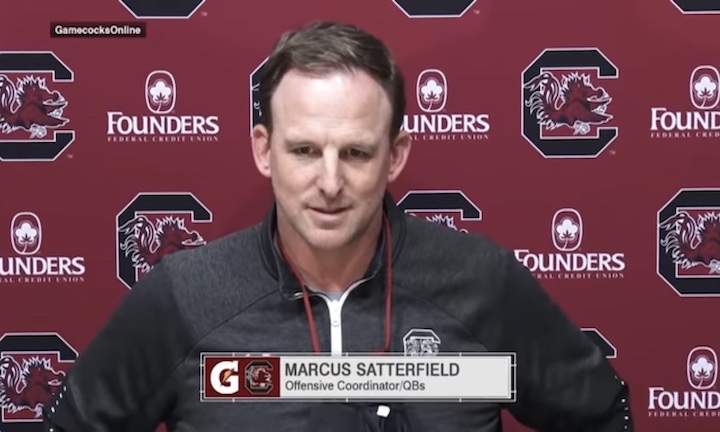 Satterfield covered topics like comparing the NFL and college games, his expectations for the offense and his thoughts on relationship building in a press conference on Monday.