S.C. activist creates community change – one book at a time 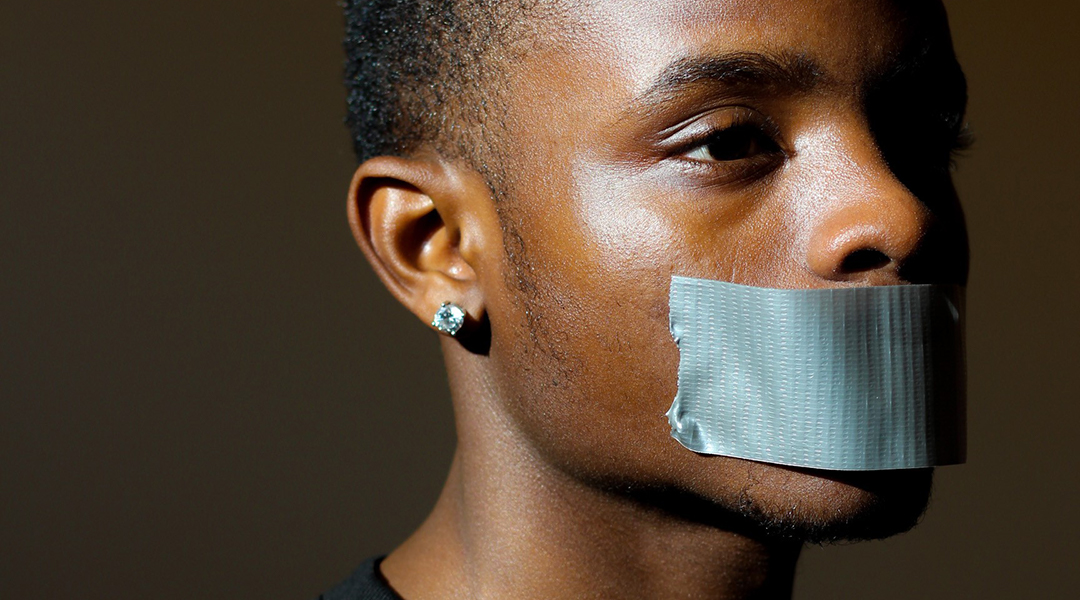 ROCK HILL, S.C.  – At the main entrance of Winthrop University in Rock Hill, South Carolina, Tadean Page walks on the sun-kissed sidewalk along Winthrop Memorial Circle, where students are strolling to class and soaking in the new spring weather.

He stops and clutches his first published book “Dear Black Boy,” getting emotional. It has not been a particularly miserable afternoon, yet he can’t help but lament over the purpose of his work, which is to get books into the hands of young Black boys.

“I wanted to create something short that they’d actually read and enjoy and engage with,” Page, a Winthrop alumna who now works at the university, said Tuesday. He wrote the book to engage the Black community, particularly young Black boys. “So I wanted to think about what is a space that I can insert and put as many books into that space as possible.”

But that’s getting ahead of the story. First, he launched an initiative he calls Project 85, providing free bookshelves and donated books to local barbershops across South Carolina.

Page said the barbershop is a traditional meeting spot for Black men and boys. By simply providing local barbershops with free bookshelves and books, Page hopes to create a space for young Black boys to pick up a book and take it home. His goal is to implement 50 libraries in 50 barbershops.

After recently receiving over 250 book donations from Loads of Literacy — a partnership with The Early Learning Partnership Of York County, The York County Library and The Junior Welfare League —  people have begun to reach out to Page from other locations, including Charlotte.

“Until I reach my goal of 50 in South Carolina I don’t want to step out,” Page said.

Barbershops aren’t the only unique place Page wanted to implement library nooks. Providing free bookshelves and book donations to laundromats have also been on his radar.

So far, Page has set up libraries in five laundromats across four different cities in South Carolina:  Clover, York, Fort Mill and Rock Hill. The donated books are also free for the children to take home.

“The U.S. Department of Education reported that 85% of black boys are reading below level,” said Page. “I want to reduce that number.”

In his book “Dear Black Boy,” he put together a collection of stories from Black men that spoke on the Black male experience that is often not told. He began writing the novel his senior year of college and published the book shortly before graduation in May 2018. The novel was published by Movement Publishing and sells for $13 through Amazon.

“I wanted to create a space and place for black boys to be vulnerable, to express their emotions and feelings.”

There are chapters in the book discussing growing up without a father, having children at a young age, societal pressures and suicidal thoughts.

He currently works at Winthrop University, his alma mater, focusing on public outreach community engagement. His primary focus is to recruit and help Hispanic, Black, and LGBTQ+ students.

Whitney S. Campbell, the campus visits and events coordinator and ambassador adviser at Winthrop University, said Page is “aware of his vision.”

“He walks with purpose every day, commanding attention in the right way through his ability to lead with empathy and passion to help others,”

His enthusiasm for community engagement and outreach stems from growing up in Dillon, South C. His parents worked with after-school programs. Page said he was inspired by their work and the need to improve in his community.

Page’s list of accomplishments is steadily growing. He is an author, advocate for Black youth, among several other titles of work.

Apart from his Project 85 efforts, he’s also an entrepreneur. Page created Ascend Solutions, a company that helps smaller companies and nonprofits with their community engagement strategy. His company offers a $75 per-hour program called “Think Tank,” where individuals can brainstorm and collaborate on new business ideas.

“It’s a way for us to get together, put our brains together, and come up with cool ideas,” he said.

According to Page, “Be the change you want to see in the world,” helped create his passion for helping other young Black boys with similar experiences.

“I really just wanted to create a space and a place for black boys to flourish and thrive without the constraints of the world, based on where they live.”

His future goals include becoming a partner in creating a school for black boys to achieve their dreams.

Page wants all young people to be left with the message that “your wildest dream is not that wild.”

“Tadean is my co-worker, friend and in many ways a mentor. He may not be aware, but even though we serve on the same team together as equals, I look up to him,” said Campbell. “He inspires me to continue the work toward my purpose and align myself with what truly fulfills me.”

“We stopped dreaming somewhere in our experiences,” Page said. “I want to give light to you, to know to continue to dream.” 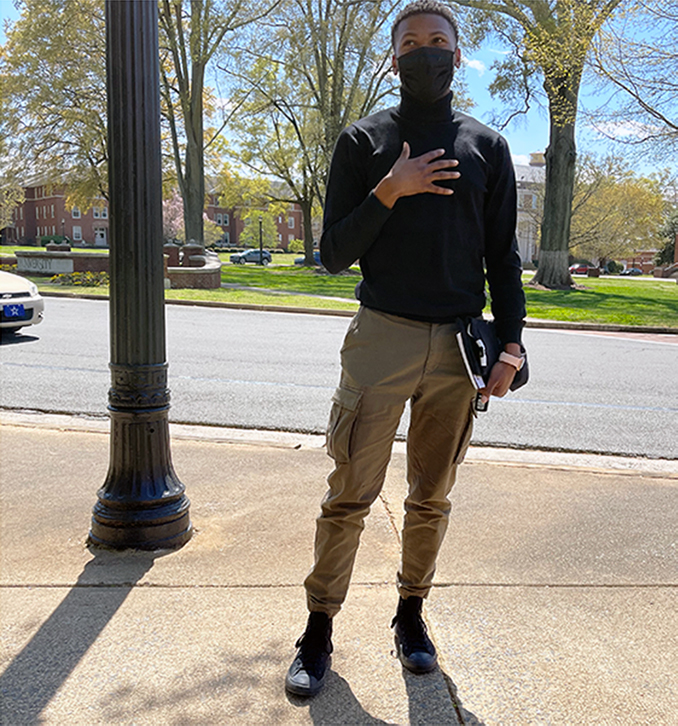 Page is still tied to his alma mater, Winthrop University, with his name known by current and former students. Photo by: Daniella Ramirez 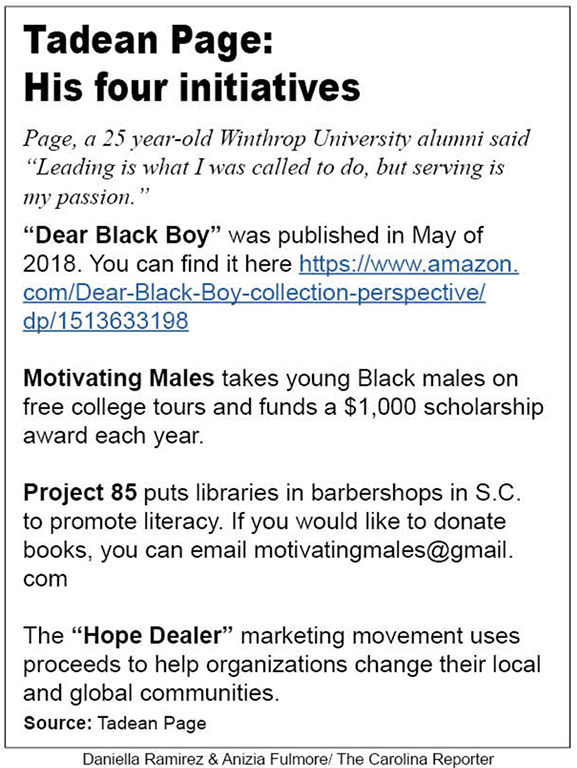 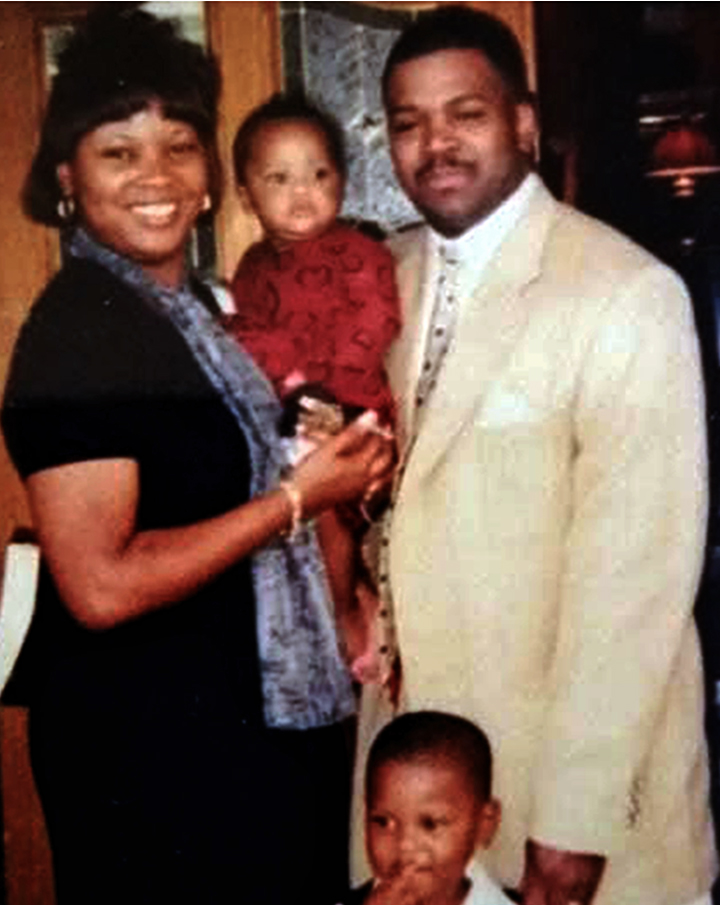 Page gives a lot of credit to his parents Tanya and Dean Page, for inspiring his work of improving the lives of young Black adults in South Carolina. Photo courtesy: Tadean Page 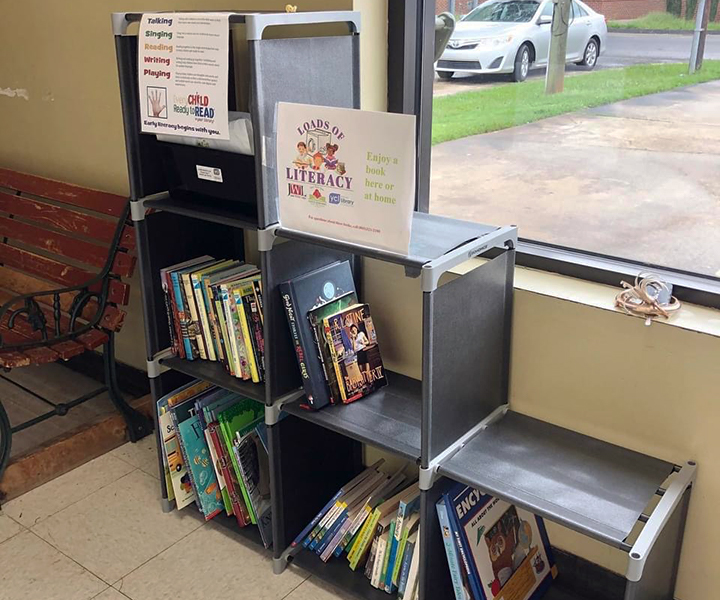 Johnny’s Barbershop in Rock Hill is one of 10 barbershops in SC that Page has implemented a library nook, in collaboration with Loads of Literacy. Photo courtesy: Tadean Page 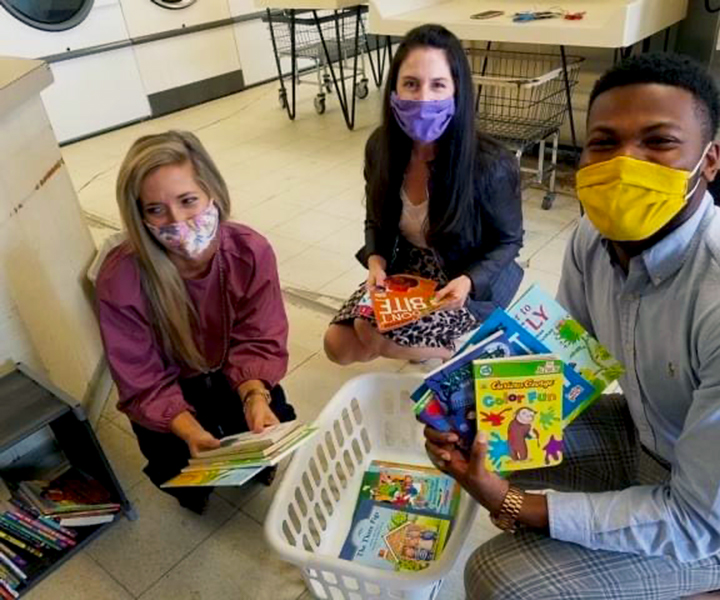