McMaster orders no evacuations ahead of hurricane, but warns of flooding, high winds 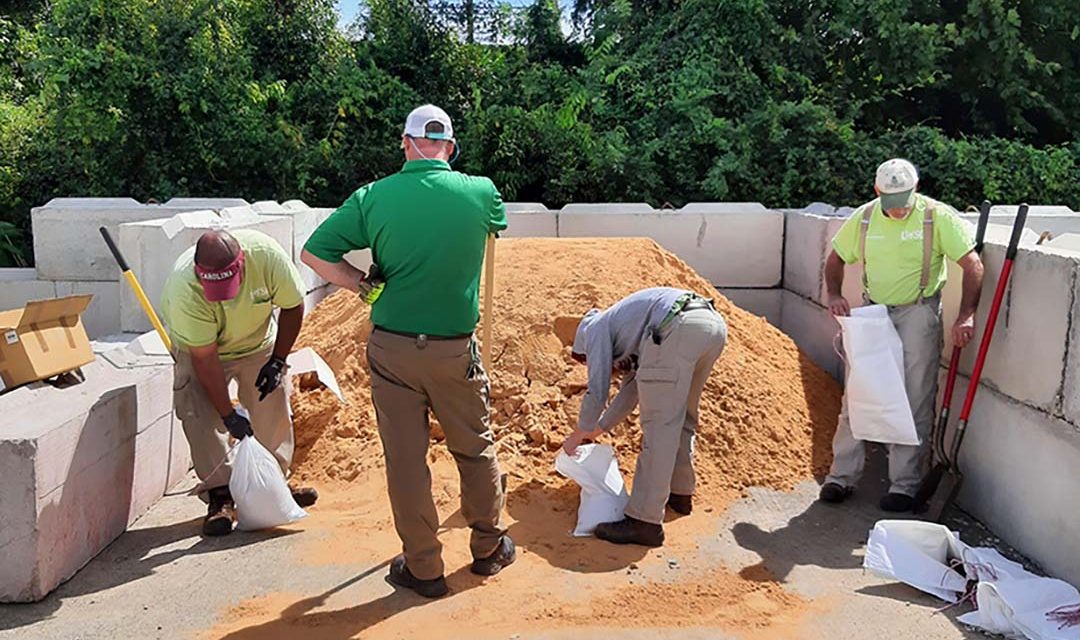 Landscape crews prepare sandbags to secure buildings prone to flooding at the University of South Carolina. Hurricane Ian is expected to arrive in Columbia on Friday. (Photo courtesy of Norman Stewart, landscape manager at USC)

S.C. Gov. Henry McMaster on Wednesday did not order residents to evacuate from the coast as Hurricane Ian barrels toward the Palmetto State.

That means local governments and schools, on the coast and in the Midlands, will make their own decisions about closing or staying open.

There’s a 1-in-3 chance that when it hits the coast Friday it could strengthen into a hurricane, possibly a Category 1, weather experts said.

Hurricane Ian hit Florida as a Category 4 storm Wednesday afternoon and is expected to be one of the most destructive storms Florida has seen.

It most likely will arrive in South Carolina as a tropical storm. But as its path is projected to cross back over the Atlantic Ocean, there’s a 1-in-3 chance it will become a Category 1 hurricane, according to a Wednesday briefing from the National Weather Service’s Columbia office.

Heavy rainfall and flash flooding from Friday to Saturday morning will be the greatest threat to the Midlands, NWS Columbia said. The Midlands were placed under a tropical storm watch on Wednesday.

Residents should expect tropical storm-force wind gusts, heavy rainfall and flash flooding to arrive in the Midlands on Friday.

“Run from the water and hide from the wind,” McMaster said. “That is the rule here. Be sure to know where you are to be prepared.”

The hurricane’s projected path as of Wednesday afternoon will bring Columbia anywhere between 3 to 6 inches of rain through the weekend, according to NWS Columbia.

Gusts could be between 40 and 50 mph. That could down trees and power lines. But the potential for tornadoes is low.

“That’s one of the reasons why we’re thinking some of the heavier rainfall amounts,” a NWS Columbia spokesperson said during that agency’s briefing. “If it was moving faster, we’d probably be able to narrow that range down. Fortunately, we’re not expecting anything in the way of what’s going on in Southwest Florida.”

Statewide, flooding is the biggest concern, according to NWS Columbia. Shelters will open Thursday in Charleston and Jasper counties for residents who choose to evacuate. Some Lowcountry bridges may be closed if sustained wind speeds are high enough, S.C. Department of Transportation Director Kristy Hall said.

It’s important to buy food, water and gas and have flashlights and first-aid kits on hand in case of a power outage, according to Mike DeSumma, a spokesperson for the Columbia Fire Department.

In Midlands grocery stores, shelves that hold bottled water, flashlights and non-perishable foods are still stocked. But as the storm travels closer along the region, more items are expected to sell out.

Residents can pick up their medications early ahead of extreme weather conditions with most insurance companies, a Walgreens representative told the Carolina News and Reporter. The Five Points Walgreens store expects larger crowds of people to come to pick up prescriptions on Thursday.

A full list of tips from the S.C. Emergency Management Division on how to best be prepared is available here.

Residents should avoid the nearly 30 roads that are prone to flooding in Columbia, city officials said. Intersections on Blossom, Harden and Wheat streets are especially low-lying and flood more quickly than the rest of the city.

“Whenever we have that prolonged period of heavy rain over a short period of time, we have flooding – and it happens fast,” DeSumma said.

The Columbia fire department is encouraging people to stay home Friday and Saturday but to not cross roads with standing water if they do choose to travel.

City and county firefighters will work with the Columbia Police Department to monitor the flood-prone areas. Officers will be posted where they’re needed to assist with traffic and barricades, city of Columbia spokesperson Jennifer Timmons said in a Tuesday email to the Carolina News and Reporter.

Dams and reservoirs overflowing or bursting are another concern the state is monitoring. But only minor flooding along the Midlands’ rivers is expected, according to  the NWS’s Columbia office. Dam and reservoir owners and operators should clear debris from spillways and assess the water level to determine if they need to lower water levels ahead of the storm, according to the S.C. Department of Health and Environmental Control.

Dominion Energy said it has released water from the Lake Murray dam this week as a precaution.

Prisma Health, meanwhile, is preparing its campuses for large amounts of rain and high wind speeds, visitors and team members, according to Tammie Epps, the communications director from Prisma Health.

“Prisma Health stands ready to assist other healthcare facilities that may be impacted by the storm with the temporary relocation of patients or in the requests for equipment or supplies,” Epps said in an email statement.

Essential agencies want people to know that they’ll work no matter what the conditions turn out to be. 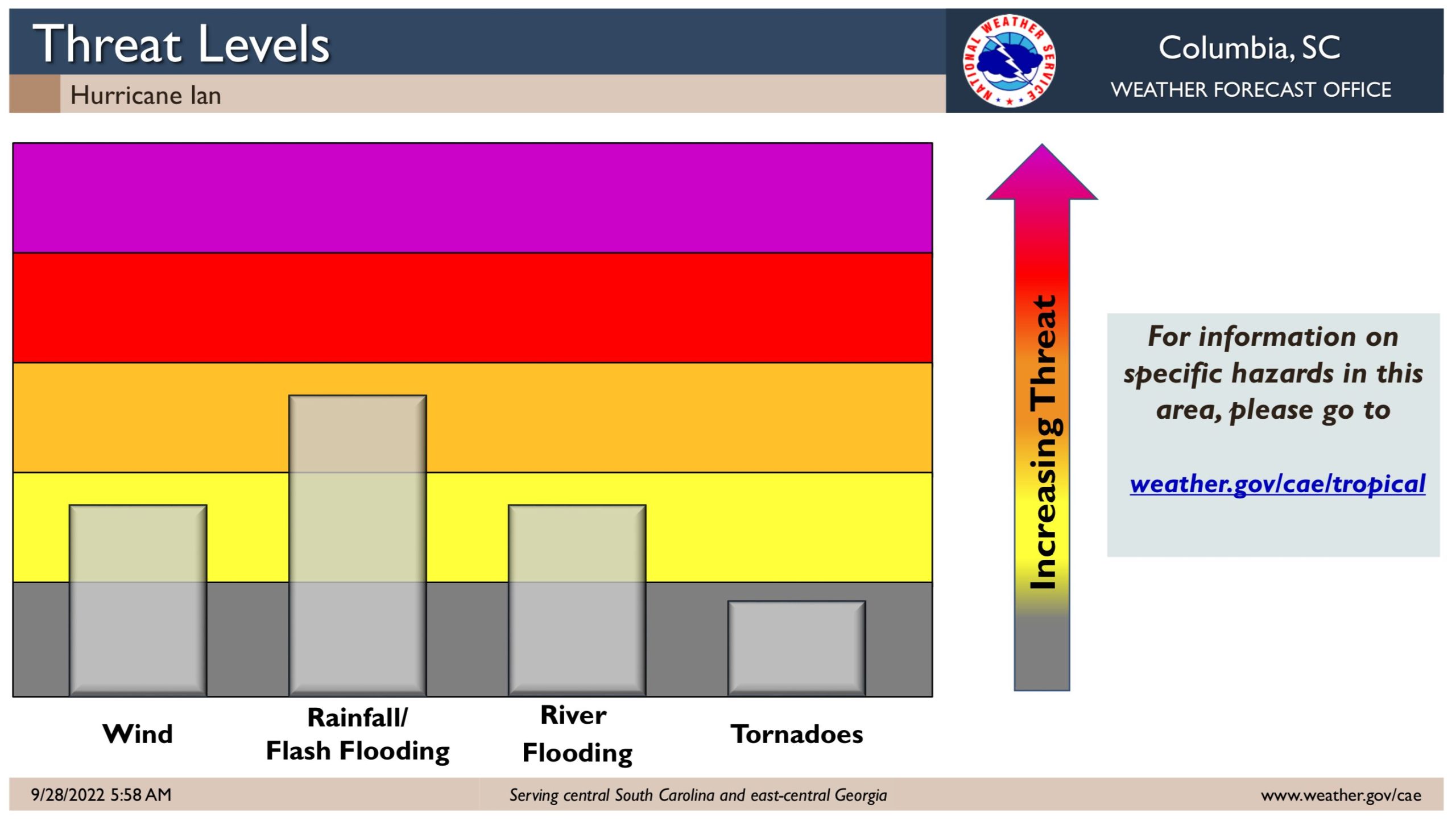