Mulvaney cut from same cloth as other out-sized S.C. politicians 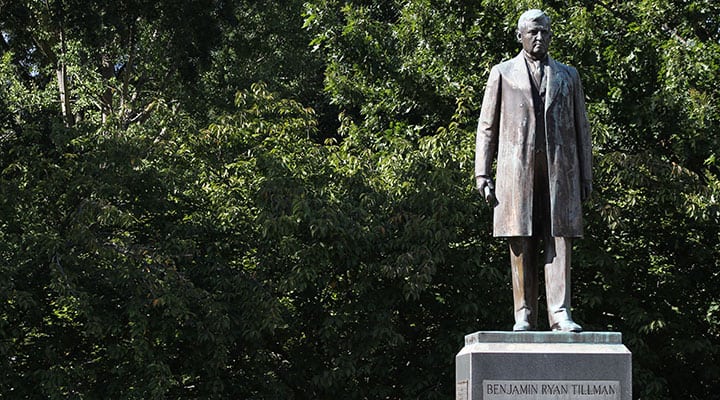 South Carolina has had many unusual politicians, including “Pitchfork Ben” Tillman, who advocated for poor white farmers and worked to disenfranchise African Americans.

By HAYDEN BLAKENEY and AUSTIN POWELL

Amid Washington’s unfolding impeachment drama and a growing cast of players defending or impugning President Trump, the president’s acting Chief of Staff Mick Mulvaney made a splash when he addressed the White House press about the controversial withholding of funds from the Ukrainian government.

“We do that all the time with foreign policy,” Mulvaney exclaimed, gripping the sides of the podium. “I have news for everybody. Get over it. There’s going to be political influence in foreign policy.”

The explosive comments rocked Washington, thrusting the former South Carolina representative to the forefront of national politics and made him a key figure in the impeachment inquiry against President Trump.

Mulvaney is only the latest in a long line of South Carolina politicians whose eccentric flair had a serious effect on national politics. Although it may seem that South Carolinians pick these larger-than-life figures, according to UofSC history professor Bob Oldendick, the state is just lucky.

“You can pretty much go to any state and find they have their own unique individual characters,” Oldendick said. “There are unique politicians in every state, ours are just familiar to us.”

Here are a few examples of some unique S.C. politicians:

Trey Gowdy: This former S.C. representative chaired the U.S. House Select Committee on Benghazi, a two-year probe into the Sep. 11, 2012 attack on the American Embassy in Libya. After the extensive investigation revealed no wrongdoing on the part of then Secretary of State Hillary Clinton, Gowdy admitted Clinton’s testimony was an “unmitigated failure.” As the chair of a heavily publicized committee, Gowdy also became known for his eccentric haircuts. After being called a loser by President Trump due to his approval of the Mueller investigation, Gowdy decided to exit national politics but still makes appearances as a media figure.

Mark Sanford: Former S.C. Governor Mark Sanford gained national attention after vanishing for a week in 2009. Although he claimed he was hiking the Appalachian Trail, it was soon revealed that Sanford had actually traveled to Argentina to see his mistress. He ended his tenure as governor in 2011, but ran as a state representative in 2013 and stayed in that Lowcountry seat until 2019. He lost in the GOP primary after President Trump decried him for remarks Sanford had made about the president’s actions. Sanford is currently running for the Republican nomination for the 2020 presidential race, on a platform of advocating lowering the national debt.

Joe Wilson: Rep. Joe Wilson’s political moment came when he shouted “You lie” at President Obama during his first State of the Union address in 2009. The outburst faced scrutiny from members of both political parties and Wilson apologized to Obama shortly afterward. In 2018, Wilson was featured in Sacha Baron Cohen’s satirical show “Who is America?,” which is known for putting political figures in awkward or embarrassing situations. The representative read a script advocating the arming of toddlers with firearms, which he quickly retracted once he realized it was a prank.

Strom Thurmond: The late United States senator from South Carolina has the distinguished honor of holding the record for the longest filibuster in the Senate. He spoke continuously for over 24 hours in an attempt to block the Civil Rights Bill of 1957 in a defense of segregation. “No fight was ever won by staying out of it. Our cause is right and just. We shall honor ourselves by pressing it to the end,” Thurmond said. Although he began his storied career as an a staunch opponent of integration and flipped political parties when Democrats in the 1960s embraced the civil rights cause, he eventually moderated his stance on race.  He served 48 years in the U.S. Senate and died in office at the age of 100. After his death, California teacher Essie Mae Washington Williams, announced publicly that she was Thurmond’s mixed race daughter and had been supported through her life by the senator.

Benjamin Ryan “Pitchfork Ben” Tillman: Edgefield native Benjamin Tillman was a fixture of post-Civil War South Carolina during his decades-long career as governor and senator. Tillman took part in the paramilitary violence that marked the 1876 election, and was a well-known white supremacist. He acted as a representative for poor white farmers and was given the nickname “Pitchfork Ben Tillman” for this advocacy. As governor, he oversaw the writing of a new state constitution in 1895 which stripped African Americans of voting rights and other freedoms won after the Civil War.

Wade Hampton III: Wade Hampton III was a plantation owner from a wealthy family who began his military career as a Confederate general in the U.S. Civil War, funding the largest cavalry unit in the war. After the war, Hampton ran for governor of South Carolina in 1876, defying Union rules against the candidacy of Confederate leaders, and narrowly won. The disputed election featured paramilitary violence by the Redshirts, supporters of Hampton that discouraged black votes and started riots. His election as governor marked the end of Reconstruction in the state. Hampton is also remembered as a representative of the “Lost Cause,” a movement that vocally expressed disapproval of Reconstruction and attempted to reconcile the Confederate loss in the Civil War.

Preston Brooks: This antebellum era representative is most known for his caning attack against Charles Sumner on the House floor in 1856. Sumner earlier issued a speech decrying the violence in Kansas over the state’s slavery referendum and specifically named southern leaders involved in aiding the pro-slavery side. Brooks interpreted this as a direct insult and responded by beating Sumner with his cane at the House. The event is seen as emblematic of national division over slavery before the Civil War, as South Carolinians famously sent Brooks new canes while abolitionists denounced the violence.

John C. Calhoun: John C. Calhoun was known as a classic South Carolina statesman, representing the state in the federal House and Senate and occupying cabinet positions for the president in the first half of the 19th century. While serving as President Andrew Jackson’s vice-president, Calhoun represented southern opposition to protective tariffs that aided northern industry. He began to express his theories of “nullification,” the idea that an individual state could refuse to follow federal laws, kicking off the Nullification Crisis in 1833. President Jackson detested Calhoun for his role in its promotion, threatening to “hang him from the first tree he finds,” and ended the crisis by threatening military action. 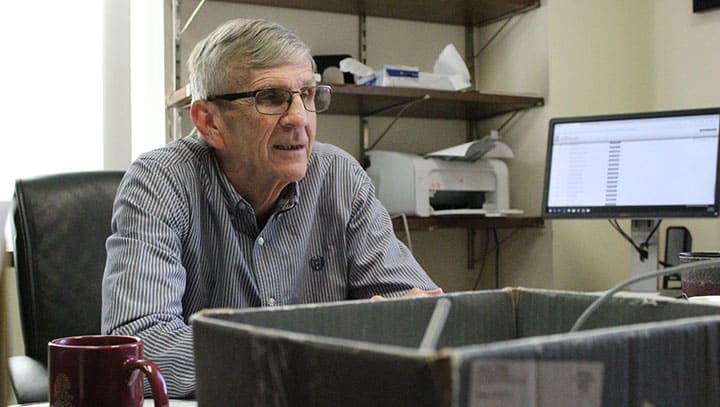 UofSC History Professor Bob Oldendick says interesting politicians are not exclusive to South Carolina. “There are unique politicians in every state, ours are just familiar to us.” 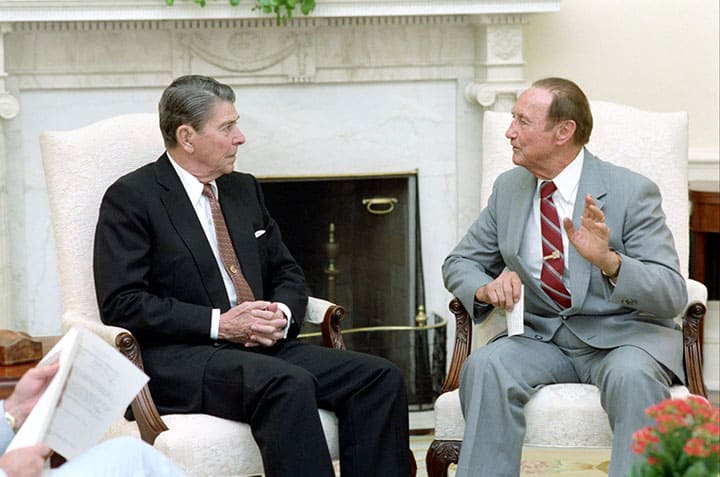 Strom Thurmond meeting with President Ronald Reagan in 1987. The S.C. senator served until 2001. 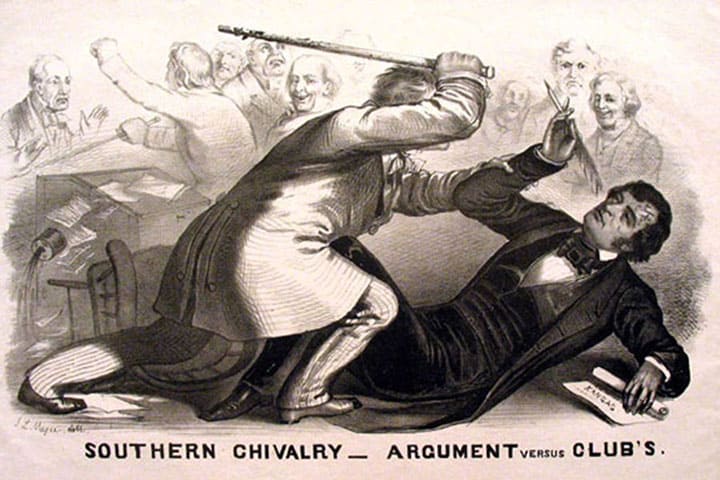 Preston Brooks is famous for the caning of Charles Sumner on the House floor in 1856, captured here in a famous political
cartoon by J.L. Magee. 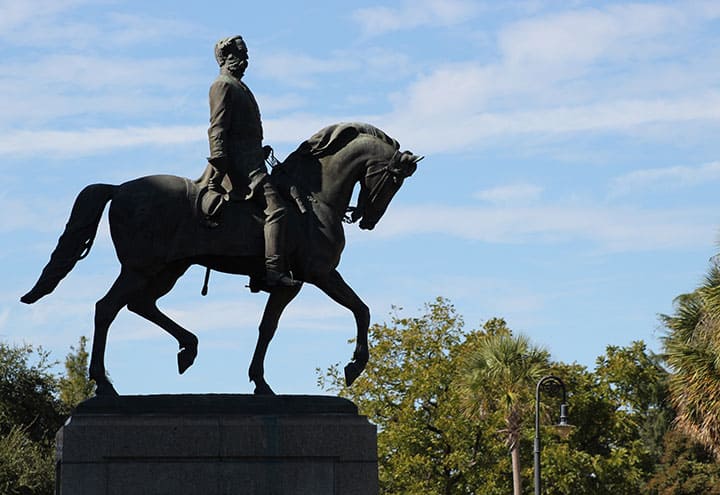 This statue of Wade Hampton III is one of many on the State House grounds. The Civil War general effectively ended
Reconstruction in the state after being elected governor in 1876.