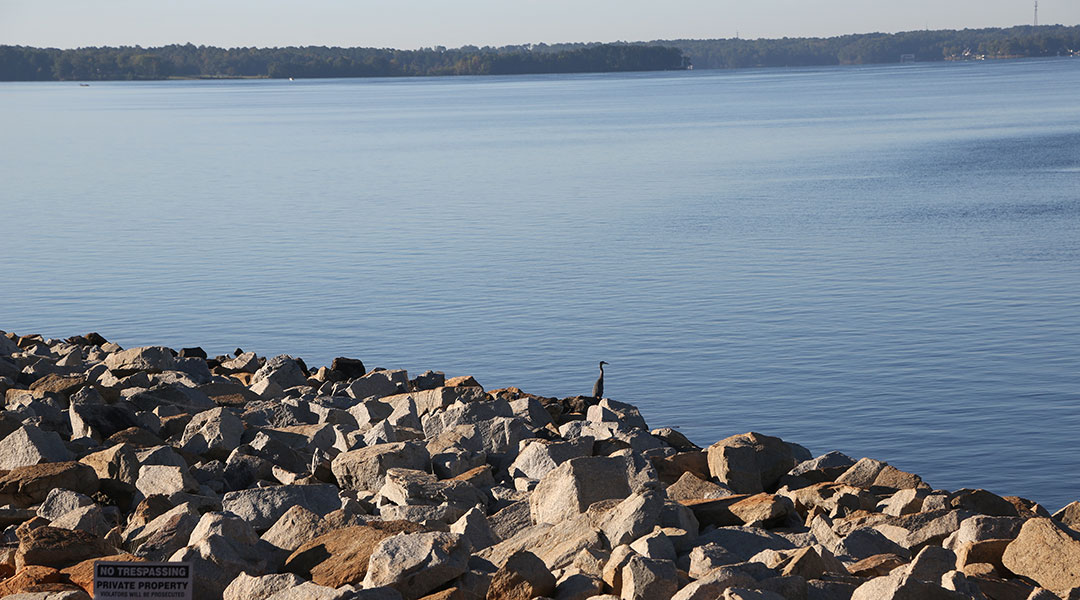 During the Lake Murray Dam Swim, swimmers have 90 minutes to swim the two miles from the Irmo side of the dam to the finish line on the Lexington beach side, according to the nonprofit’s website. Photos by Emma Dooling

More than two decades after 11-year-old Drew Smith died in a boating accident on Lake Murray, an event created to honor his memory has become mired in conflict and apparent misunderstanding between the event’s organizers and the boy’s parents.

The Dam Swim for Drew started in 1999 when seniors on the Lexington High School swim team swam in Lake Murray in honor of the rising sixth-grader, who was killed July 19, 1997, when a drunken boater rammed into the boat Drew and his father were fishing from.

In the wake of the tragedy, the Smiths helped ratify the Boating Safety and Reform Act of 1999, or Drew’s Law. This law raises the penalties for a BUI, or boating under the influence, to equal those of a DUI.

Earlier this year, the Smiths ceased ties with the 2-mile, 90-minute open water swim, after disagreements about allocation of funds and new privacy restrictions. The parents withdrew their son’s name from the boating safety event, and it was renamed the Lake Murray Dam Swim.

Latest South Carolina Secretary of State records show that the organization has raised $127,608.64.

In a July 30 Facebook post, Randall Smith, Drew’s father, wrote that under the dam swim’s new bylaws, the Smiths were not given donor and participant contact information so they could write annual thank you letters.

The parents and the nonprofit were also at odds about the location of an indoor pool that organizers intended to build in memory of Drew, using funds raised through the event.

According to the Facebook post by Randall Smith, the pool was to be built at Lexington High School. However, Karen Campbell, the race director, said the pool was always intended to be built somewhere in Lexington County other than the high school.

“The school district made it very clear to us that because of the cost of building a pool and upkeep of managing a pool, they were not interested,” Campbell, who also teaches University 101 in the University of South Carolina College of Education, said. Campbell and the other members of the board are volunteers with the organization. There is no paid staff.

In the same Facebook post, the Smiths explained their decision to withdraw Drew’s name and called for the nonprofit to return the funds raised so far so that the Smiths can give it to “a worthy charity in honor of Drew.”

“It is with deep sorrow that this has happened and I hope you understand our decision,” the Smiths wrote in the Facebook post.

The Lake Murray Dam Swim has estimated that an indoor pool facility would cost upwards of $20 million to build.

Originally, the organization sought to fully fund the pool itself, but given its progress and the lofty cost of a pool, it has recently altered its mission, instead stating on its website that the funds will now “go towards” a pool in the county. In a Frequently Asked Questions section on the dam swim website, the nonprofit explains its name change and continued emphasis on boating and swimming safety.

However, Campbell said the Lake Murray Dam Swim cannot find any organization that is willing to finance the building of the pool.

“We don’t feel like they’ll probably be able to pay to build it,” Campbell said. “I would love a pool to be built, but I feel like the more important, tangible thing now is making a difference in boating and swimming safety.”

The dam swim is the only event the nonprofit holds annually. This year’s dam swim was held on Sept. 18 with over 100 swimmers participating.

For the past 22 years, the Smiths have funded separately the Dam Swim for Drew Scholarship, which goes to a student on the swim team at Lexington High School. They did not sit on the board of the dam swim but attended the event annually.

Fred Ruinen, the race course coordinator for the event, said that while he did not know the Smith’s personally, he was surprised by their decision to withdraw their involvement.

“Everything that Karen and the group have done for the swim has always been to continue doing the swim in Drew’s name and to keep everything moving,” Ruinen said.

Campbell said despite the recent difficulties the nonprofit has faced, the Lake Murray Dam Swim will continue to advocate for boating and swimming safety in Lexington County, and the pool, if it is eventually built, will still honor Drew.

“I have continued with this event because I believe in Drew Smith and I believe in boating safety,” Campbell said. “I can’t cross that lake without thinking of him.” 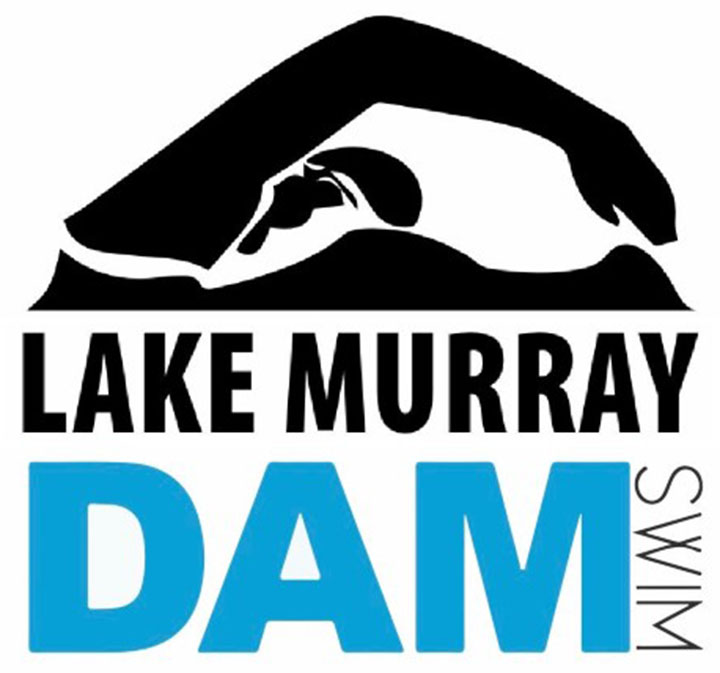 Formerly known as the Dam Swim for Drew, the Lake Murray Dam Swim rebranded earlier this year after conflict between the event’s board of directors and Drew Smith’s parents. Courtesy of Karen Campbell 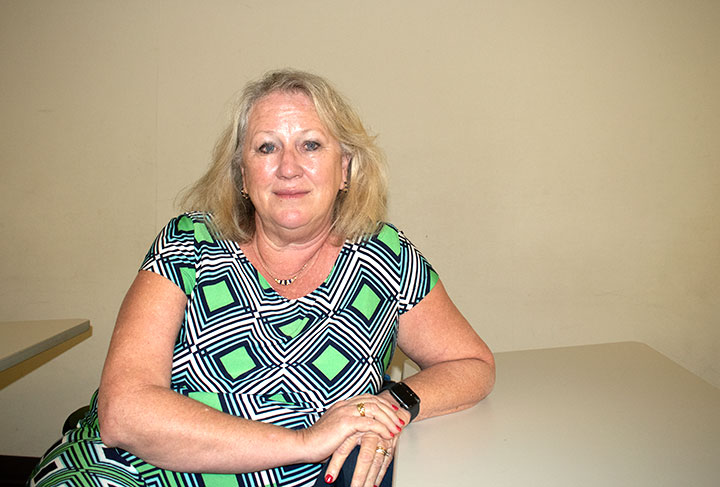 Karen Campbell, race director for the Lake Murray Dam Swim, hopes the swim can still fulfill its original purpose of honoring Drew Smith’s memory despite no longer including his name. 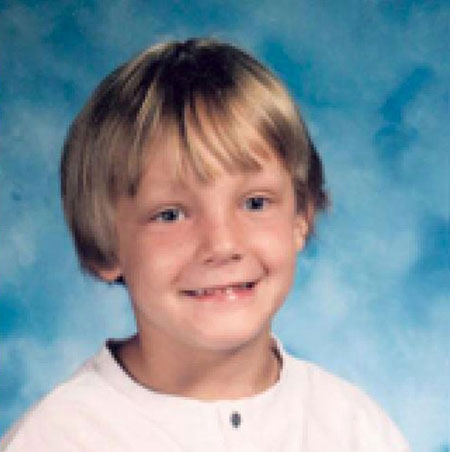 Drew Smith, 11, was killed in an impaired boater accident on Lake Murray on July 19, 1997. The dam swim was organized to honor him. Photo courtesy of Randall Smith’s Facebook page 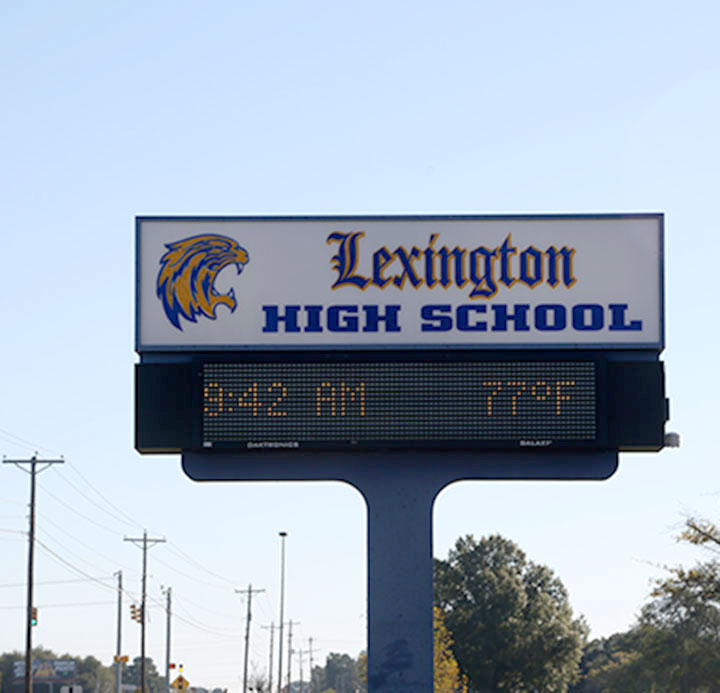 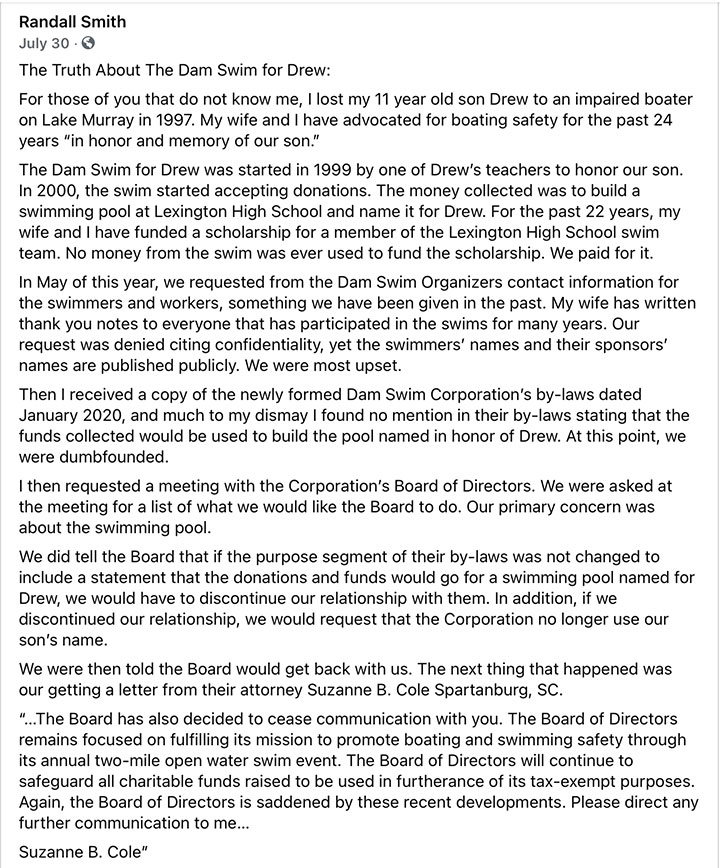 On July 30, Randall Smith explained the family’s decision to withdraw Drew’s name from the event in a Facebook post. 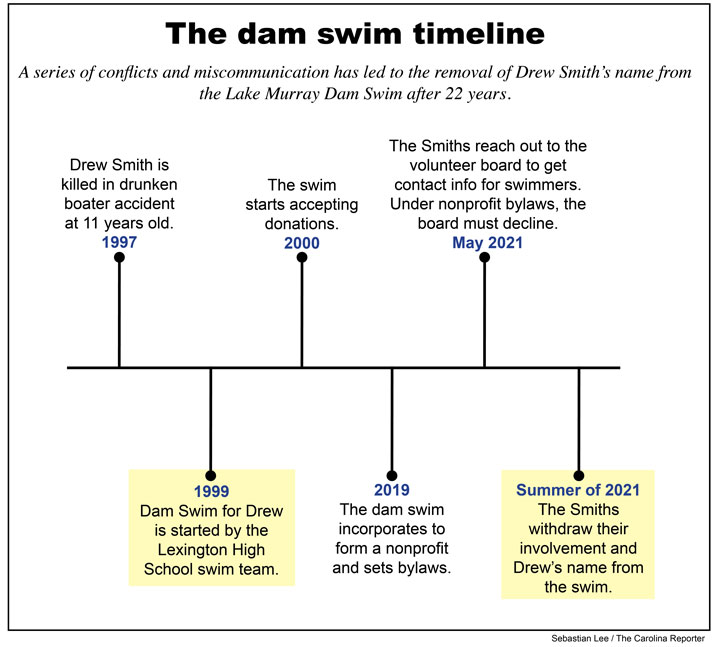