Jane Steinberg never misses hearing naturalist Rudy Mancke speak when the seasons change. And she always makes sure to bring something for him to inspect. For this equinox, Steinberg brought Mancke true chestnuts, not to be confused with the common horse chestnut.

“You give blood every time you pick up that cockamamie, prickly shell that thing comes in,” Steinberg said. “But I figured he’d like it.”

Mancke held his Nature of Fall talk at noon on September 25. The event was held in front of the McKissick Museum on the University of South Carolina’s campus, where Mancke is a lecturer.

Mancke spoke to a crowd of over fifty people and talked about the quirky natural items that people send to him, some he features on his “Nature Notes” radio broadcast. He explained newly introduced species in the area to mating patterns.

“I get crazy stuff all the time,” Mancke said. “Humans rearrange the world. You never can tell what somebody’s going to send me.”

Mancke delivers his nature talks four times a year – each solstice and equinox – about what is changing in the world and what new things peak his fans’ curiosity. His fans pack those metal chairs carefully placed in front of the museum steps to the point of standing room only.

Some spectators, the younger ones usually, decide to become a part of the nature he talks about by watching from the trees. They come early and stay late just to get his take on whatever bugs, animals, or plants they’ve discovered since the last nature talk. They call him “a walking encyclopedia” and said they would never miss the chance to hear him speak.

“It’s just too valuable. I wish we had more of them,” Steinburg said.

Rudy Mancke’s next talk will be the Nature of Winter on Dec. 11. 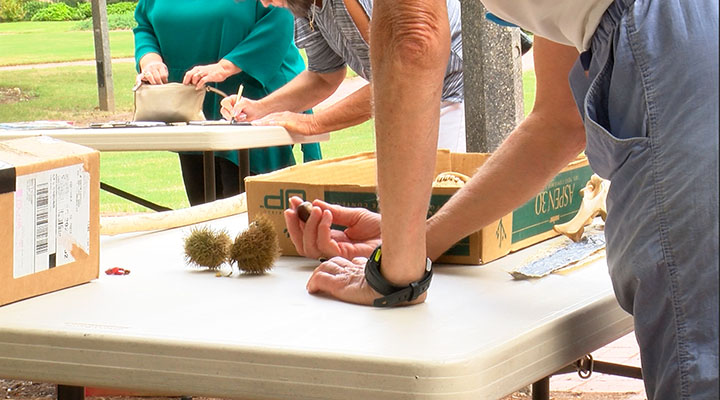 Jane Steinburg examining the chestnuts she brought for Rudy Mancke. 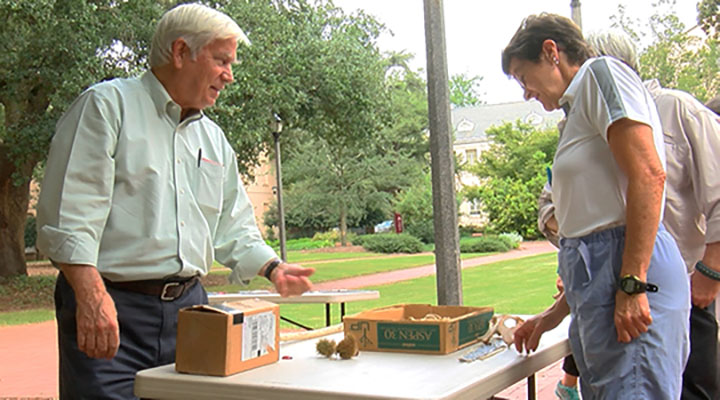