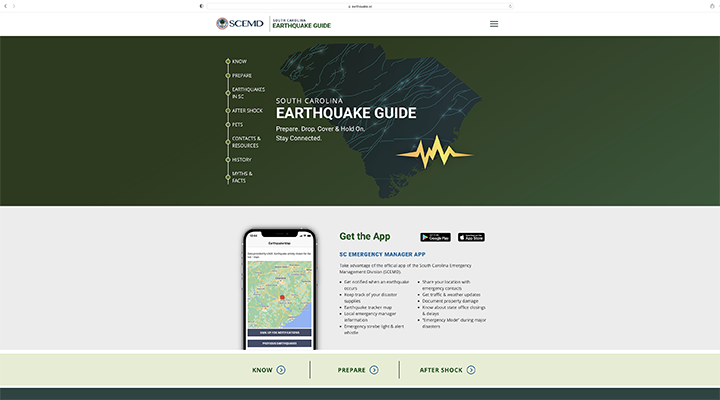 A new tool has everything you need to know about earthquakes across South Carolina.

Emergency Management’s Derrec Becker said the most important information to know is what to do during an earthquake.

“When the ground starts to shake, it needs to be an automatic, almost reflexive reaction, and that’s drop, cover and hold on,” Becker said during Monday’s press briefing. “Drop to the ground, cover your body under a sturdy table or a desk and hold on.”

The website is split into eight major sections, including a “Myths & Facts” section.

One of the most popular myths is that earthquakes are a result of fracking in South Carolina. However, this is not true because there is no fracking occurring in the state, according to the website.

“This is a collection of a lot of the questions.” Becker said. “A lot of these are rumors, a lot of the urban legends that we’ve collected as people have asked us about earthquakes.”

Gov. Henry McMaster declared Oct. 16 – 20, 2022, S.C. Earthquake Preparedness Week. Emergency Management is encouraging residents to learn about how to be prepared for an earthquake and tell them why they occur.

Midlands residents can prepare by inspecting their home for potential hazards and building a disaster supplies kit, the agency advises.

“Despite all of our technology and everything that we have achieved in the year 2022, earthquakes still cannot be predicted,” Becker said.

Local seismologists say earthquakes occur because of the stress put on the plates under the earth’s surface.

“The crust of the earth is under a constant state of stress,” said Robert Morrow, a geologist with the S.C. Department of Natural Resources.

Scott White is a professor in the School of the Earth, Ocean and Environment at the University of South Carolina, and directs the university-run South Carolina Seismic Network.

“What we’re experiencing right now are a lot of earthquakes within this last year,” White said. “But if you average them out over the course of decades, it’s really not an extraordinarily large event or something that we need to be worried about.”

Historically, most of the state’s seismic activity occurs in the Coastal Plains. But that doesn’t mean Midlands residents shouldn’t be prepared.

“Just because we have not had a large or damaging earthquake in the past doesn’t mean that it’s impossible that would ever happen in the future,” White said. “And people should be prepared and aware of steps that they can take.”

South Carolina’s biggest earthquakes happened in Charleston in 1886 and Union County in 1913. The 1886 earthquake killed 60 people, making it the largest quake documented in the Southeastern United States, according to the new webpage.

The U.S. Geological Survey measures earthquakes on the Moment Magnitude Scale. This replaced the previous measurement, the Richter Scale, which was used for more than 30 years.

“What it really represents is the amount of energy released at the source of the earthquake,” White said.

Charleston’s historic earthquake was a 7.0+ on the magnitude scale. According to White, most of the recent earthquakes in the Midlands have been around a 2 or a 3 on the scale.

“Every increment of magnitude that you go up increases the amount of energy by about a factor of 10, roughly speaking,” White said. “Basically, a magnitude 5 earthquake is going to be 10 times stronger than a magnitude 4.” 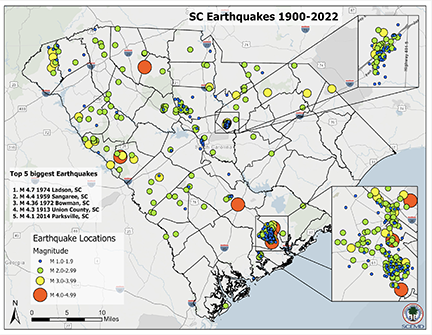 Most of South Carolina’s seismic activity occurs in the coastal region. (Map courtesy of S.C. EMD)