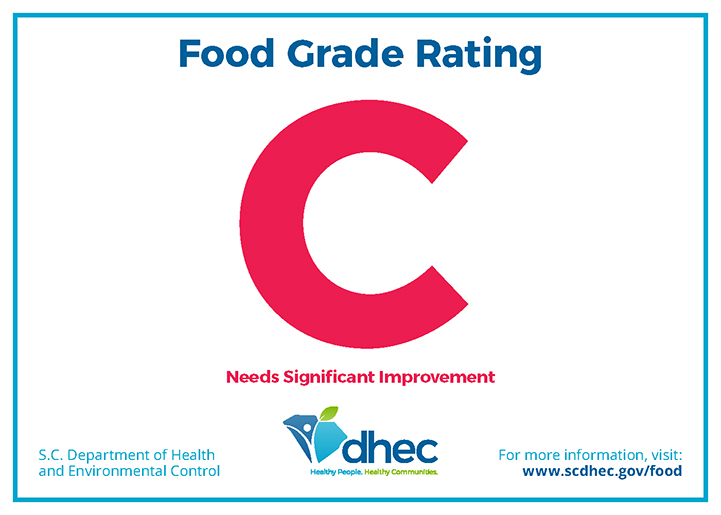 Signs such as this one are given to establishments that score fewer than 78 points or have consecutive violations. Richland County’s Alvin S. Glenn Detention Center received seven “C” grades this summer. (Photo courtesy of DHEC)

The kitchen at Richland County’s detention center repeatedly violated state health codes in the spring and early summer of this year at a time when the jail’s leadership was in flux.

A routine inspection of the Alvin S. Glenn kitchen conducted May 6 found an array of issues plaguing the kitchen, earning the jail a grade of  75, or  a “C.” That meant the facility was not meeting the proper standards to guarantee the cleanliness and safety of food being served to detainees who had no place else to eat a meal. The jail did not regain an “A” grade until Sept. 8.

Officials from the Department of Health and Environmental Control observed violations such as black build up in and around ice machines – often an indicator of mold – cooked chicken not cooling properly, foods held at unsafe temperatures, rodent droppings in the walk-in cooler,  broken floor tiles and roach activity and spills in the dry storage area.

After that initial inspection May 6 and until June 30, DHEC visit the jail six more times and fined the jail $6,600. Each inspection found the same unimproved violations, each time earning the Richland County facility a “C” grade, indicating the need for “significant improvement.” The violations included the presence of rodents and roaches in the kitchen, according to DHEC reports.

In all, the jail was without an “A” grade for four months — months longer than it takes most establishments to regain their “A” grades, according to DHEC reports.

When a facility receives a “C,” DHEC requires a follow up inspection within 10 days of the initial inspection. During the first follow-up, on May 16, the jail received a higher grade, of 89. But despite some improvements, the report still noted unsafe food temperatures and the presence of rodent droppings inside walk-in coolers.

So the jail’s grade remained a “C,” since only some of the previous violations were fixed, despite scoring within the range for an “A.”

DHEC’s food safety guidelines allow for food establishments that score an “A” or a “B” to be given a “C” if there are consecutive violations or if the facility is under enforcement action, which means it received a fine.

“None of the violations identified at Alvin S. Glenn were considered imminent health hazards,” DHEC told The Carolina News and Reporter in an email. “The enforcement action and fine were issued due to consecutive violations.”

The timeframe for removing pests from food establishments varies depending on the severity of infestation. In an email, DHEC said this is one of the more common violations it sees.

The Richland County Administrator’s Office, which manages the facility that holds city and county detainees awaiting trial, did not respond to multiple requests for comment.

All 11 Richland County Council members also were contacted. Allison Terracio of District 5 said this is the first she has heard of the issue and could not comment on it. Chakisse Newton of District 11 referred questions to the county administrator, Leonardo Brown. All other council members did not respond to requests for comment.

Follow up inspections at the jail continued through May and into June. The facility’s score continually improved, but the jail still received “Cs.” The most recent “C” came on June 30.

Alvin S. Glenn, after improving its pest and food temperature issues, was eventually given an “A” on Sept. 8. It came after over two months of no inspections at all.

Even though facilities are required to have a follow-up visit 10 days after a low score, DHEC said the two-month gap in inspections came because the jail sent DHEC information showing it was taking extra steps to actively fix the issues. The jail showed it was taking “additional measures to restrict potential rodent contact with food,” changing its pest control company and providing proof-of-work orders for “extensive repairs” to damaged equipment.

“Delays to the equipment being repaired were beyond the facility’s control as the delays were due to materials not being in stock or available,”  DHEC said in an email.

The presence of rodents in the jail’s kitchen this summer echo previous allegations of unsanitary conditions.

Disability Rights South Carolina is an advocacy group that helps disabled individuals, including those being held in detention centers, with legal rights involving their disabilities. The group worked with Burnette, Shutt & McDaniel to file a lawsuit June 13 about unsanitary conditions.

The suit alleged disabled detainees often are restrained for long periods and are kept in “foul, nauseating conditions.”

“If there’s unsanitary conditions, I think it puts detainees at risk for certain diseases,” said Annie Bame, an attorney at the law firm. “It’s essentially, it’s providing them an unsafe level of care in a (detention) facility.”

While the troubled inspections were going on, the jail got new leadership.

Tyrell Cato was named the new director of the detention center in early July. But the county administrator’s office didn’t do a background check on him until three weeks later, finding he had been fired from his previous job in Kershaw County for alleged sexual harassment on the job. Richland County then fired him Sept. 9.

Richland’s jail has been under scrutiny for reasons beyond Cato’s hiring, according to The State newspaper. Three people died at the jail this year in the span of two months. One of those deaths was ruled a homicide, and the victim’s family is now suing.