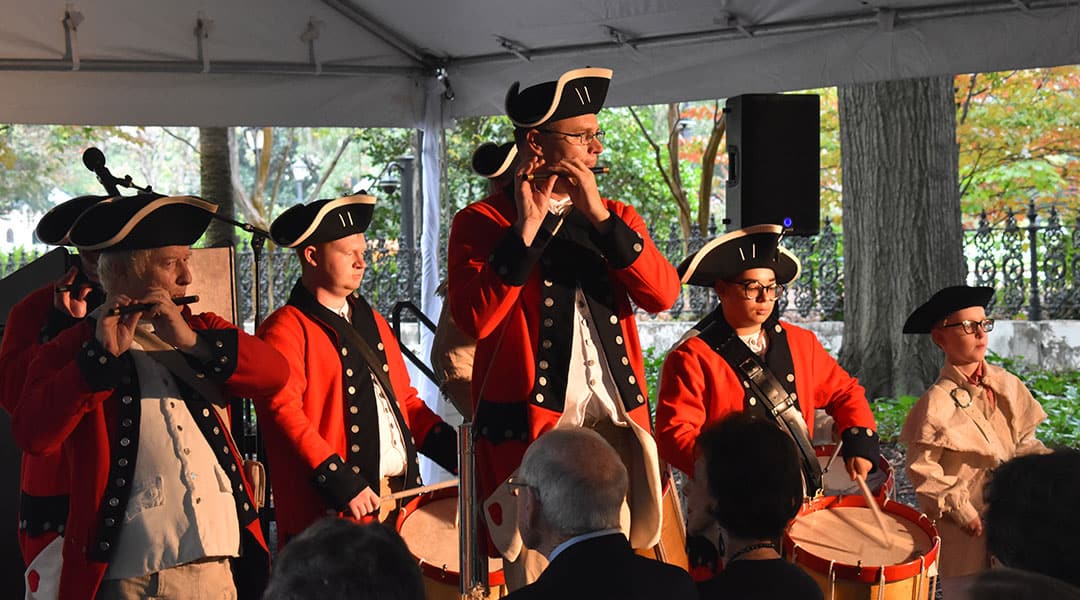 The Camden Military Academy Fife and Drum Corps performs a series of traditional marching tunes that were played during the Revolutionary War.

Nearly 250 years ago, the course of American history was forever changed by events that unfolded across South Carolina.

While the Revolutionary War was waged by patriots in other theaters of combat — New England, the Middle Colonies of New York, New Jersey and Pennsylvania — it was the Southern Campaigns that kept the spark of revolution alive.

Yet, many of these stories have gone untold and few people today know or appreciate the defining role the Palmetto State played in winning the American War for Independence.

South Carolina elected leaders and historians are hoping to change that through the creation of the Liberty Trail, a driving trail and heritage tourism destination that will preserve, interpret and promote key battlefields in South Carolina’s Revolutionary War history.

In combination with a high-tech phone application that will use GPS to help visitors connect with these sites, the Liberty Trail is the centerpiece of a statewide program that will tell the story of the campaign that secured victory in America’s War for Independence.

On Oct. 29, Gov. Henry McMaster joined with the American Battlefield Trust, the National Park Service, the South Carolina Battleground Preservation Trust and the South Carolina American Revolution Sestercentennial Commission at a news conference to announce the launch of the initiative.

The governor touted the state’s accomplishments, both past and present, and voiced his support for the initiative.

“I am convinced that our state is strong because we remember and we remember things because we are strong. I believe that our state can be a leader in this education, in this unification, in this strengthening of our country,” said Governor McMaster. “It is because of the strength of our people that the business leaders from around the world and around the country are investing hundreds and millions of dollars [in South Carolina].”

The Liberty Trail is a joint effort of the American Battlefield Trust and the South Carolina Battleground Preservation Trust that is assisted by numerous local, state, federal, private and non-profit partners.

Leading the charge among these is the National Park Service, which, through its American Battlefield Protection Program, has already contributed more than $2.5 million in matching grants toward land preservation projects associated with The Liberty Trail.

“What we propose to do, with our great partners, is to do something we’ve never done before, and that is create a world-class, first-class, inspiring experience that tells that story,” said Jim Lighthizer, president of the American Battlefield Trust.

The initiative’s first phase will involve the preservation and interpretation of 30 total sites, including 16 battlegrounds and 14 pull-offs across the state. The Liberty Trail will eventually extend to 70 sites, spanning over 400 miles in total, from the coast of South Carolina to the backcountry of Upstate South Carolina.

Lighthizer also discussed how the companion application will enrich visitors’ experiences on the Liberty Trail.

“It’s going to be the most advanced application of its kind, that’s ever been developed,” said Lighthizer. “It puts the battlefield in the palm of your hand.”

The app will reportedly not only give visitors directions to a specific battlefield, but also provide them with historical information while en route and an in-depth tour of the site once they arrive.

Lighthizer said that the app’s metrics will allow developers and park managers to see who is visiting, how long they are staying, and what they are most interested in learning about, in order to make constant improvements to both the app and to the Trail itself.

Charles Baxley, chairman of the South Carolina American Revolution Sestercentennial Commission, emphasized the importance of these analytics, stating that one of the initiative’s biggest challenges is learning how to appeal to millennials.

“We have to write a very great app that sucks them in, like Pokemon or something like that,” said Baxley. “[An app] that gets them to come to our amazing Revolutionary War sites and tells them an engaging story that they can’t say no to, or turn off and go into Facebook or Twitter or Instagram to entertain themselves.”

Pokemon Go was a popular augmented reality mobile game released in 2016 that allowed users’ GPS to locate, capture, battle, and train virtual creatures called Pokemon, adding to the craze for the Pokemon franchise.

Raleigh West, executive director of the South Carolina Conservation Bank,  said while South Carolina’s role in the Revolutionary War is well-documented, much of it is underrepresented.

West said that growing up in Monks Corner, he had no idea there was an intact British Fort just two miles from his childhood home, even with his early interest in history.

“I’m just struck by the idea that if I didn’t know about it — someone who is educated in history and had these sites in his backyard — then what does that say about the general recognition of the historical significance of these sites?” said West. “Folks, the Liberty Trail is going to fix that.”

The Liberty Trail also aims to shed light on this historically underrepresented narrative by including the experiences of all participants — whether patriots or loyalists, men or women, recent immigrants or multi-generational colonials, or members of a minority population of slaves, freemen and Native Americans.

As the 250th anniversary of the adoption of the Declaration of Independence approaches in 2026, the success of this ambitious project will rely on community engagement and effective collaboration between partners to finally tell the story of the Revolutionary War in South Carolina, organizers said.

“The Revolutionary War may have started in Boston, Massachusetts, and it may have ended in Virginia,” said South Carolina State Senator Vincent Sheheen. “But it was surely won right here in South Carolina, and that’s something to be proud about.” 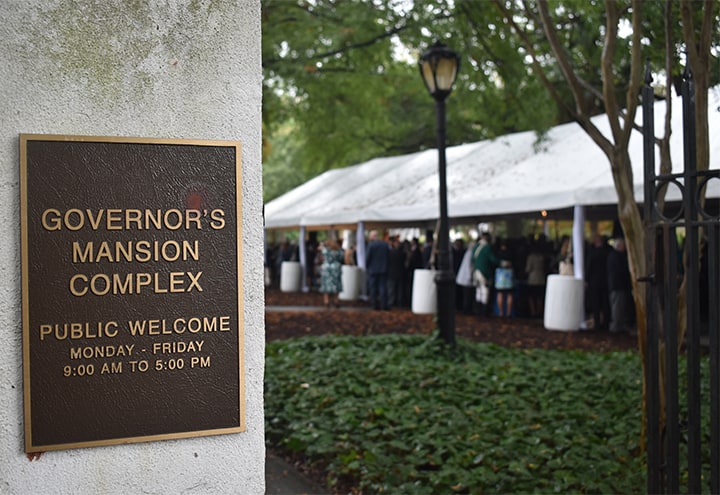 The official launch of the Liberty Trail initiative took place at a news conference at the Governor’s Mansion in Columbia, S.C. on Oct. 29. 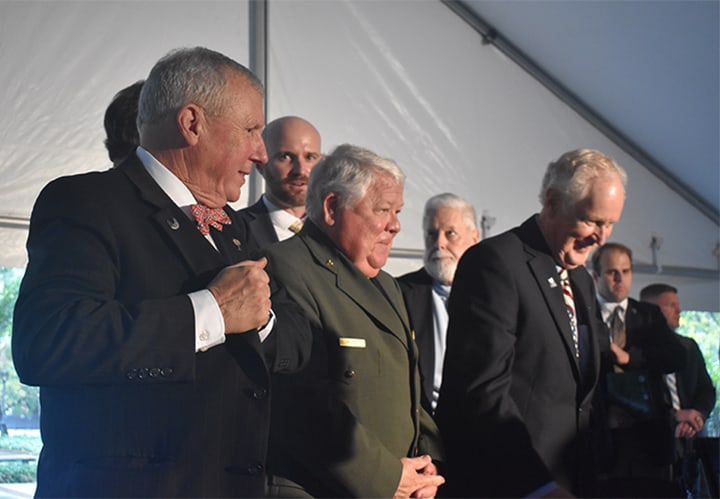 Representatives from the Liberty Trail initiative’s many partnerships congratulate each other after the news conference. 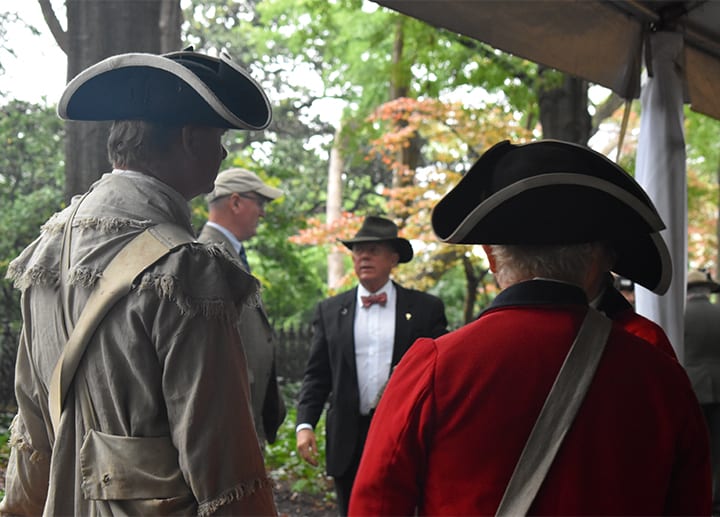 Two guests, dressed as an American patriot and a British loyalist, socialize together following the conclusion of the news conference. 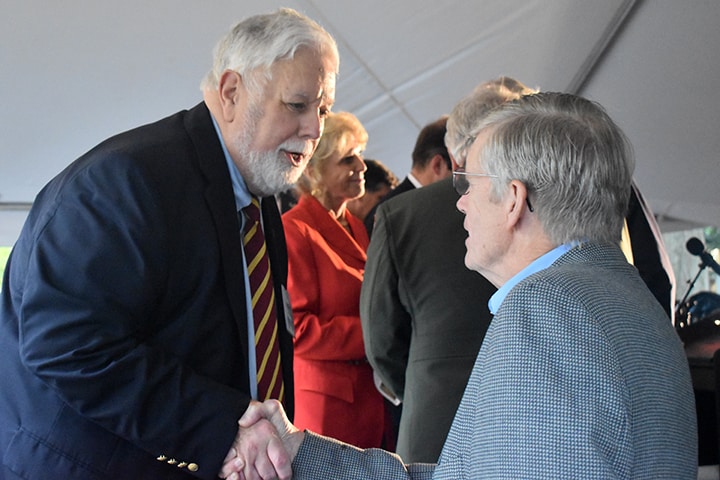 Doug Bostick, Executive Director and CEO of the South Carolina Battleground Trust, is congratulated by a guest after the launch.