Not all sports – or cleats – are created equal 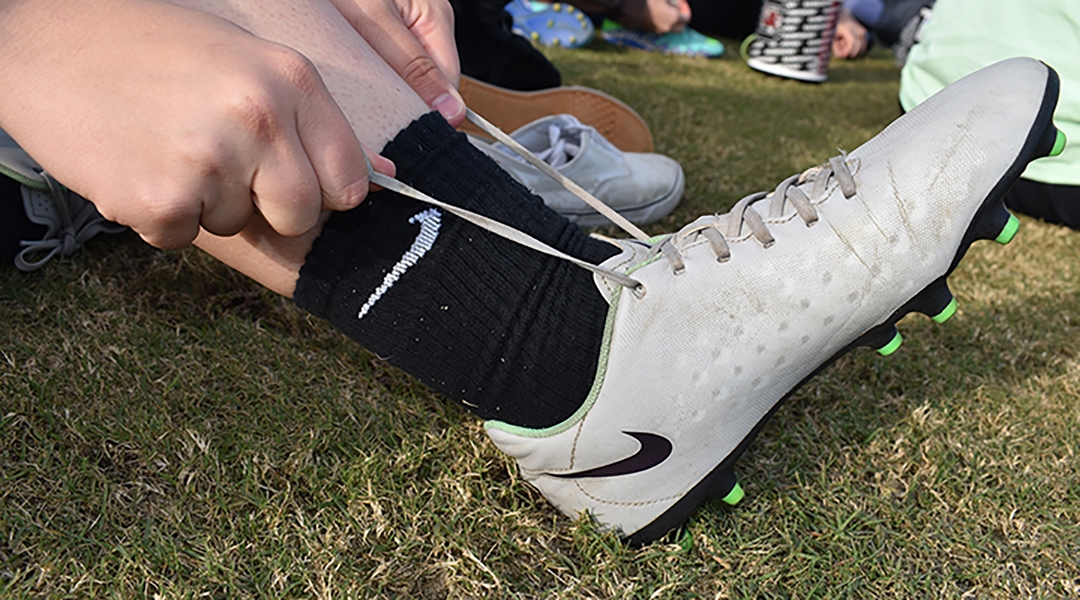 Rugby player Sedona Schuehle wears men’s cleats to practice. There are no cleats sold specifically for rugby players, so most of the players wear men’s soccer cleats.

The ‘Me Too’ movement spotlighted how females are treated in the entertainment industry but female athletes have been campaigning for equal treatment for years.

The ‘Equal Play Equal Pay’ movement was brought about by the U.S. Women’s National Soccer Team in 2012, whose members of the team demanded that they get paid as much as the men’s team. But female athletes get paid less in the professional arena – they also don’t have access to the necessary equipment like cleats in the recreational arena.

Cleats are vital to athletes who want to ensure top performance.  Some female athletes are crying foul as they struggle to find the range of cleats that are available to their male counterparts. Major sporting good retailers sell more men’s equipment in store than women’s – especially when it comes to cleats.

Most high school softball teams require metal cleats but when playing on turf, regular cleats are required. Softball players like former high school catcher Kelsey Schalonis, who played for Top Gun Softball, have difficulty finding both types of cleats in the major stores.

Ashley Goins, head athletic trainer at the University of South Carolina, played soccer and lacrosse in high school. She had to search the men’s section for cleats, unable to find them in the women’s .

Goins’ best available resource was to wear men’s cleats in a smaller size – but there was one problem.

“My foot wasn’t big enough to wear men’s shoes, so I went to the boys section,” said Goins.

Goins is a size seven which converts to a men’s five and a half.  For most stores, size six starts the boys’ section. Furthermore, if a store does carry women’s cleats, the majority of the time they are in bright colors that not everybody wants.

“Color is a big part of the issue as well, I didn’t want pink or purple cleats,” said Goins, mother of two girls.

Pink for girls and blue for boys has been a long standing trend in the fashion and marketing industry.

Stephen Shapiro, associate professor for USC’s Department of Sport and Entertainment Management, believes there are fewer resources put into women’s sports which affects the marketing strategies of the major companies.

“I have a seven-year-old daughter and she does not like pink,” said Shapiro. “It’s very difficult to find things that aren’t pink, particularly for sports equipment for girls. I think over time that will change as we get a cultural shift in terms of what women consumers would be interested in.”

The issue is not that women’s cleats don’t sell or that only the pink cleats sell.

“My guess is that those large national or international companies are just looking at it from a broad range and saying we feel like we’re getting more bang for our buck selling the boy equipment,” said Shapiro.

Shapiro believes that with the increasing amount of participation in women sports, stores should soon start catching up and carrying more supplies for women. He also thinks that media plays a role in the marketing strategy as well.  If media coverage was spread equally, women would have more opportunity to grow which would make more equipment available.

“The times that we have seen major women’s sport on television, it’s done pretty well,” said Shapiro. “I mean, look at the women’s world cup.  They sell out their games, huge ratings on television. You look at Serena Williams, and her success at tennis and the ratings that she gets when she’s competing.”

“Those are just doses of the possibility if woman sport got more attention.  At this point, the resources go to men’s sports from a media coverage perspective.  Usually attendance and interest follow along that line.”

There has already been progress from Title IX, federal civil rights law which prevents discrimination based on sex. With the advent of Title IX in the 1970s, women’s collegiate sports programs bloomed across the country.

“When elite women athletes are playing at a high level, and they’re given an opportunity to play, you’ll definitely see growth,” said Shapiro.

Hopefully with the growth of women’s participation in sports, there will be easier access to equipment so that Goins and Shapiro’s daughters won’t have to wear pink or men’s cleats in order to play. 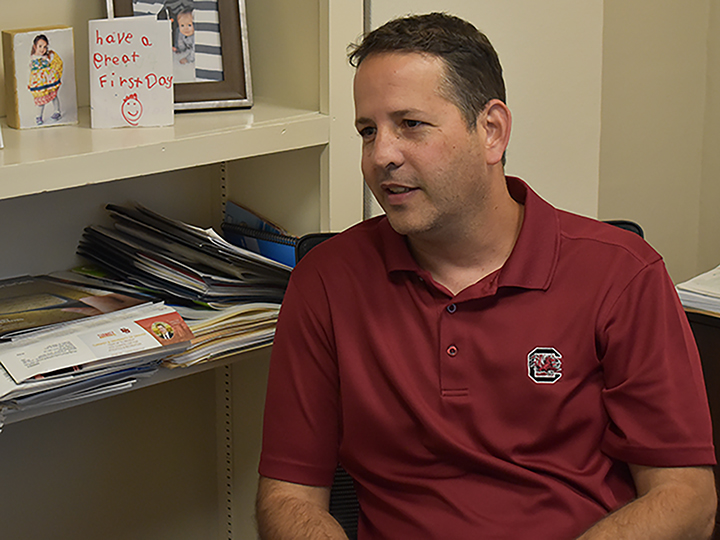 Stephen Shapiro, associate professor for USC’s Department of Sport and Entertainment Management, believes there are fewer resources put into women’s sports which effects the marketing strategies of the major companies. He has a daughter who hates pink so it’s hard for him to find equipment for her. 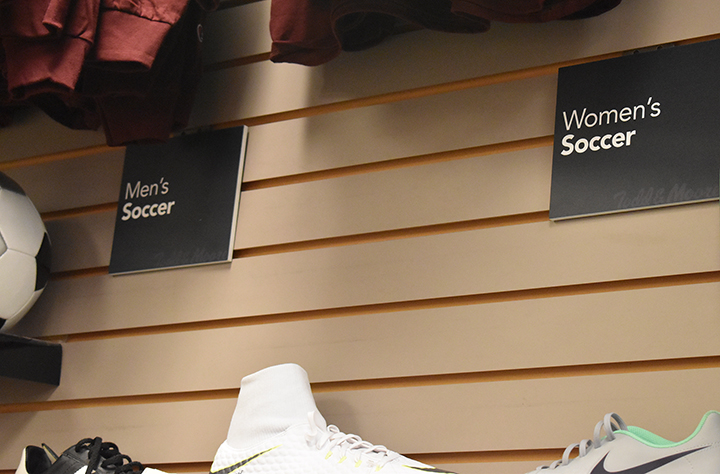 At local sporting goods store Todd & Moore, there are cleats for both genders for every sport. Ashley Goins, head athletic trainer at the University of South Carolina, played women’s soccer and lacrosse in high school. She had trouble finding women’s cleats in many stores. 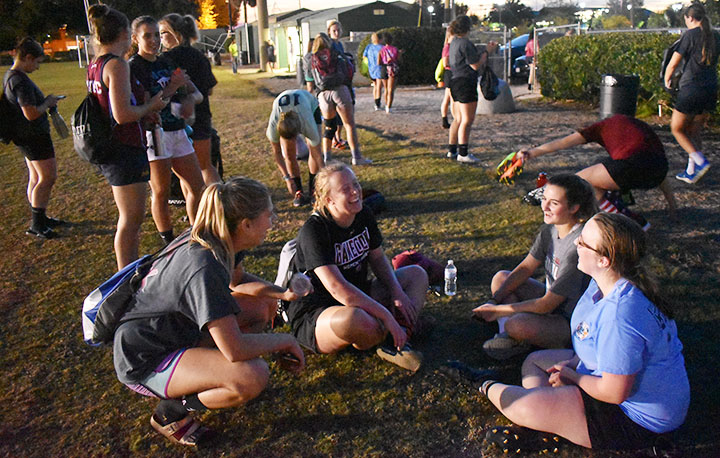 Women in sports is increasing. USC Women’s Rugby team has seen an increase in participation, while the television coverage of the sport is also increasing after the 2016 Olympics. 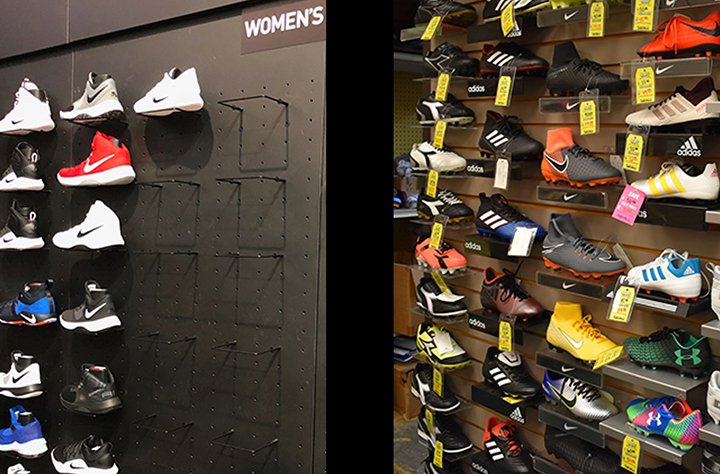 The availability of women’s sports equipment is inconsistent. On the left is the women’s cleats section at a major sporting goods store and on the right, is the cleat selection at Todd and Moore located in Columbia.