Not your traditional marijuana, Delta-8 is South Carolina’s “diet weed” 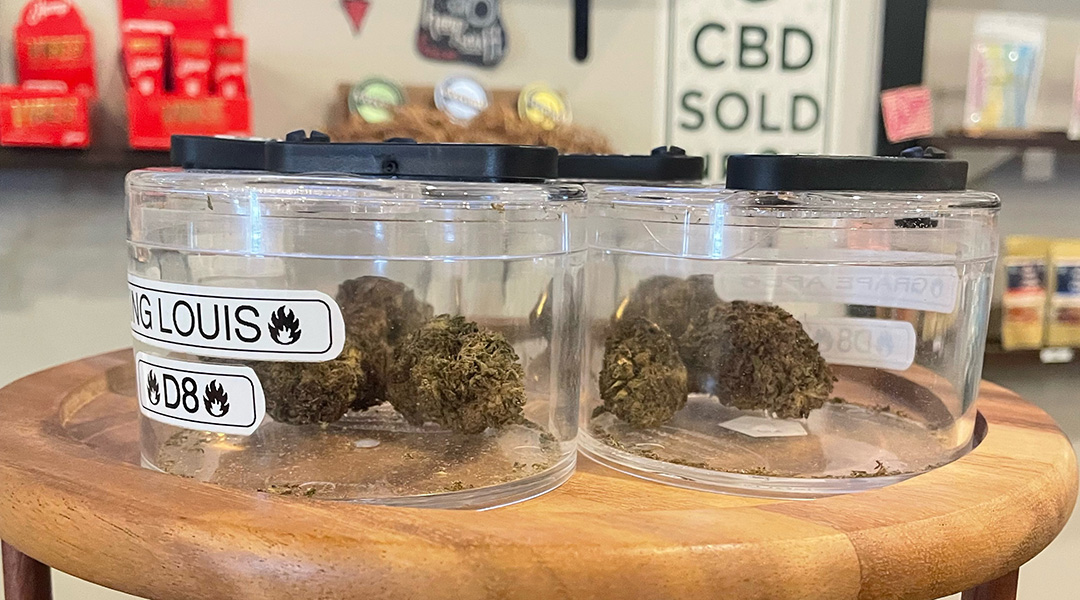 Delta-8 is becoming accessible in many forms, including flower buds, at local South Carolina retail businesses. Photos by Noah Patheja

In 2018, a less potent form of marijuana was accidentally made legal. Now, the Food and Drug Administration is trying to take back control of Delta-8.

Delta-8 came onto the FDA’s radar after an uptick in reports to the FDA and poison control, advertisements appealing to children was found online, and manufacturing contamination concerns came to light.

Delta-8 gummies are one of the reasons the FDA is setting its sights on Delta-8 regulation. They are easy to synthesize and are flavored and sugared to be nearly identical to a product from a candy store. Between January 1 and July 31, there were 660 calls to poison control centers about Delta-8. Of those calls, 41 percent dealt with unintentional exposure to Delta-8, 77 percent of the unintentional exposures were under the age of 18.

A loophole in the 2018 farm bill allowed Delta-8 through the legalization of the cultivation of industrial hemp of up to 0.3 percent THC. The bill took industrial hemp off the schedule of controlled substances. Cannabinoids in this legal hemp are synthesized into Delta-8 THC. Essentially, CBD is turned into Delta-8, which creates the high that people feel.

When asked about the legality of Delta-8, SLED pointed to state statutes. Under South Carolina law, marijuana is still defined as a controlled substance. Synthetic cannabinoids, manmade marijuana-like drugs that can be added to hemp, like Delta-8 are also listed as schedule I controlled substances. This means that in South Carolina, the THC found in Delta-8 can make someone fail a drug test and some law enforcement agencies may still seize Delta-8 products. Delta-8 specifically is not mentioned in the state law, so even though it was made legal by the 2018 farm bill, the legality of the product is still unclear in South Carolina.

Children can easily mistake the Delta-8 gummies for candy as they are represented in the majority of unintentional Delta-8 exposures. Overall, 39 percent of the Delta-8 related poison control calls were about children and 18 percent of the calls required hospitalization.

Shelby Sebro, a bud specialist at Crowntown Cannabis, knows that Delta-8 can be dangerous for kids.

“I’ve had a lot of older folks come in, like, can I get the least flashy thing that they can find when it comes to Delta-8 like a gummy? So that their kids aren’t tempted to go after it?” Sebro said.

The symptoms that make Delta-8 and marijuana dangerous for children come from THC, tetrahydrocannabinol, the psychoactive component in hemp products. CBD, another legal hemp product, is more mild because it lacks THC.

For Matthew Goyed from Charlotte, N.C., the legalization of Delta-8 brought relief from anxiety that he couldn’t get from CBD. Goyed suffers from seizures and struggles to sleep without panic attacks. His friend in Maryland suggested medical marijuana, which is not currently legal in North Carolina, might help with his anxiety. When Goyed heard about Delta-8, he took the opportunity to try what he calls “diet weed” to ease his symptoms.

While some Delta-8 users like Goyed use the substance to deal with pain or anxiety, much of Delta-8’s popularity is due to the similar “high” it shares with marijuana. Delta-8 is known to give feelings of euphoria without some of the negative side effects of marijuana, such as paranoia or distorted perception. This difference is important to users like Goyed whose seizures could be triggered by the distorted perception.

“If a closet door for example suddenly seems bigger than it should, that’s a warning sign to me that I’m about to have a seizure,” Goyed said.

The FDA estimates the psychoactive effects of Delta-8 are 50-75 percent as potent as regular marijuana.The DEA is bearing down on Delta-8 due to the fact that it is synthetic. The process to synthesize hemp is unregulated, so anyone can do it. Amateur synthesizers can do the process incorrectly which leads to dangerous chemicals in the product that can lead to adverse effects. This is why it’s illegal in states like Colorado where recreational marijuana is legal.

Concerns about safe use of Delta-8 have led the FDA to issue warnings about the product and discuss potential regulation. At the moment, regulation decisions depend on the state. This leaves the future of Delta-8 up in the air.

“I think it’s gonna affect the packaging, and I think the FDA may crack down on who exactly is making it so they have an idea of what’s exactly in every single thing,” Sebro said of the potential of legislation.

Goyed said he believed that the FDA warnings on Delta-8 were cautionary and was curious how regulation on Delta-8 would happen.

“If they do anything, let’s make sure that what is labelled as Delta-8 is Delta-8. Make sure that it’s all a trustworthy product,” Goyed said. 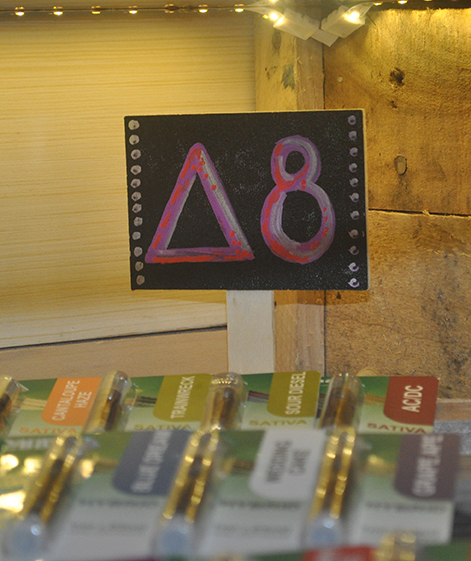 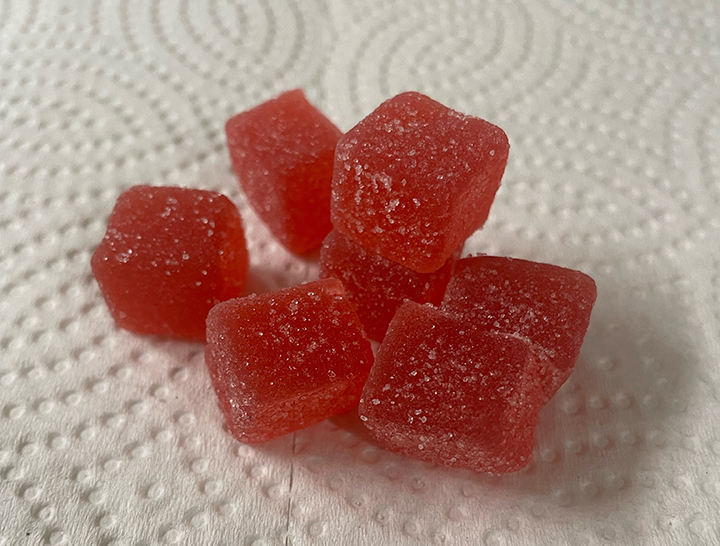 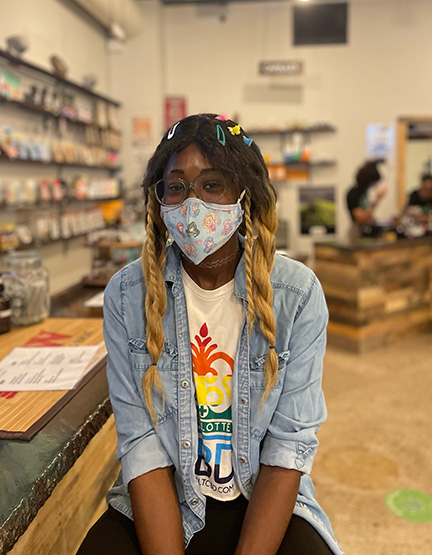 Shelby Sebro is an expert on Delta-8 for Crowntown Cannabis and often sees customers come in looking for Delta-8 gummies and products. 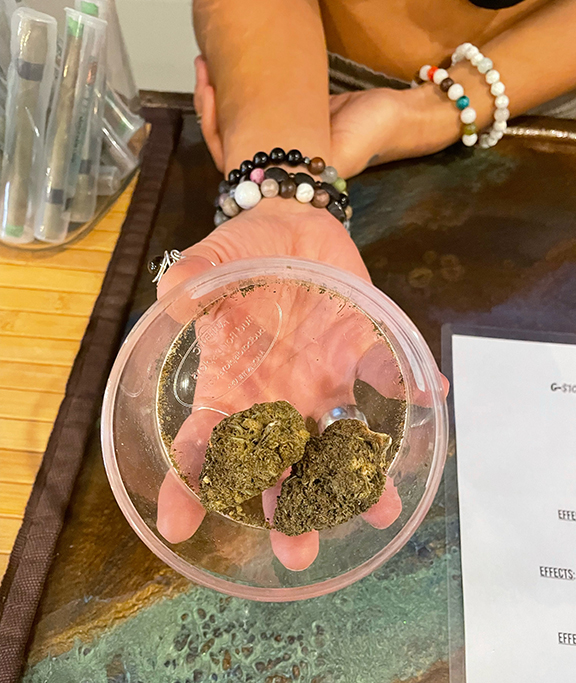 A Crowntown Cannabis employee shows that Delta-8 and marijuana flowers are visually similar. Both flowers shown are Delta-8 but one could easily be mistaken for marijuana. 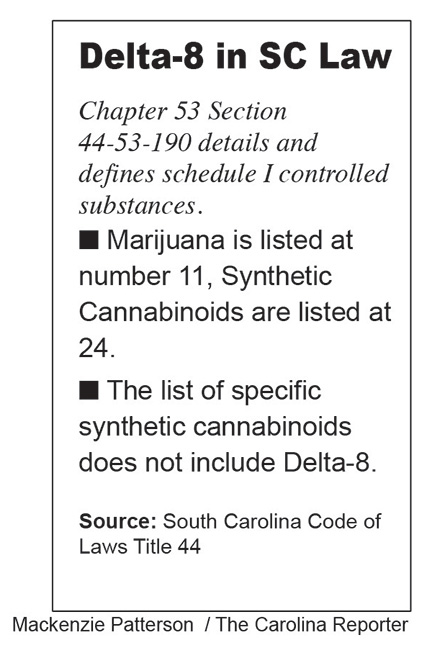