Overcoming an eating disorder one day at a time

When Ashley McMullen was in 9th grade she began to leave her lunch by the back door, fearing the chips and sandwich her mother made each morning would add too much weight to her small frame.

“It started out as, ‘I’m just going to lose a few pounds. I don’t like the way I look,'” McMullen, now a Clemson University senior, said. “And it started off like that and then it escalated to me losing 20 to 25 pounds.”

“I didn’t need to lose weight at all. And it kind of escalated to a full-blown eating disorder really quickly.”

McMullen said she cannot pinpoint when she began to restrict herself from eating. But her mom, Karen McMullen, caught on quickly.

Her mother would pack her daughter’s lunch every day for school – a sandwich, chips, water and some fruit.

According to Karen McMullen, Ashley started off by leaving her chips by the back door. Then, she added her sandwich to the pile. Soon, Ashley was only eating a single “cutie,” a small mandarin orange and a bottle of water.

“She could have easily thrown those chips and sandwich out at school. And I wondered if it were a cry for help,” Karen McMullen said.

Ashley said her mom would ask her when she got home, “Ashley why aren’t you hungry at lunch?” Ashley said she would tell her that she didn’t want to eat and her stomach hurt.

Karen McMullen saw the warning signs and began to research eating disorders online. After contacting her daughter’s pediatrician, she brought Ashley in for testing. Between December 2011 to February 2012, Ashley weighed 72 pounds.

Ashley was diagnosed with Anorexia Nervosa in 2012. The last week of February 2012 she was admitted to a local hospital. That’s when she and her family realized the seriousness of her eating disorder.

The McMullens did not know the long road that was ahead of them.

At the time, South Carolina did not have a 24-hour facility dedicated to treating people with eating disorders.  (There is one now in Greenville, the Eating Recovery Center South Carolina) Ashley had to be admitted to a facility at the UNC Center of Excellence  for Eating Disorders in Chapel Hill , North Carolina.

“The day that I got hospitalized I was suppose to cheer at a basketball game,” Ashley said. “Instead of going to do that, at my after school appointment at 3 p.m., my doctor was like ‘You’re being admitted now.”

“Your whole life kind of shifts. And it kind of makes you feel guilty because your parents are having to take off of work because of you. I have a little brother and his life altered completely.”

After a month of treatment, including therapy sessions with psychologists and meetings with nutritionists and dietitians to plan meals, Ashley was released from the facility and was able to return home.

“So I can definitely say it’s a long process and it definitely looks different for everyone. Maybe some people fully recover in a full year. That just wasn’t my situation,” Ashley said.

Ashley now believes she began to restrict her eating to have more control over her life. She says it’s a twisted mindset and it’s hard to let go even though she knew it wasn’t healthy.

“One of the hardest things to do is to admit that you are struggling with that,” Ashley said. “You’ll think that you’re doing great and that you beat it and then those thoughts come back. But there is a light at the end of the tunnel and you can make it.”

Ashley, who will graduate in May with a degree in Psychology and attend graduate school in the fall at Florida State University, listens to her body more now and doesn’t stress as much as she did before. She says she goes with the flow more.

Since being diagnosed seven years ago, Ashley shares her story to educate others and to break the stigma surrounding eating disorders. She was nervous to speak up at first but decided to not let fear and what people thought stop her.

“I realized that it is so prevalent. So I realized I needed to be talking about it. And that it wasn’t going to define me that it was just apart of my story.  And that it can be used to help other people,” Ashley said.

“We are simply raising awareness in the community that we serve but it’s important for those in the legislature to know as well,”  Yeakel said. “And just talking about it raises awareness as that network grows.”

If the resolution passes, these days serve the purpose to “encourage citizens and policymakers to learn more about eating disorders and the obstacles to treatment, promote education and prevention efforts and to help people overcome and prevent these life-threatening diseases,” according to the resolution. 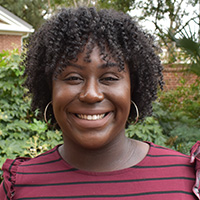 Jamie Gilbert-Fitzpatrick is an aspiring investigative journalist from Irmo, South Carolina. Since she was little, she has always had a passion for people and telling their stories. She particularly loves to report on stories focusing on marginalized people and human rights issues. Jamie’s ultimate goal is to improve the media coverage of women and minorities in the mass media. Outside of journalism, Jamie spends her free time giving back to her community, traveling to new places and spending endless hours in her hammock with a good book.