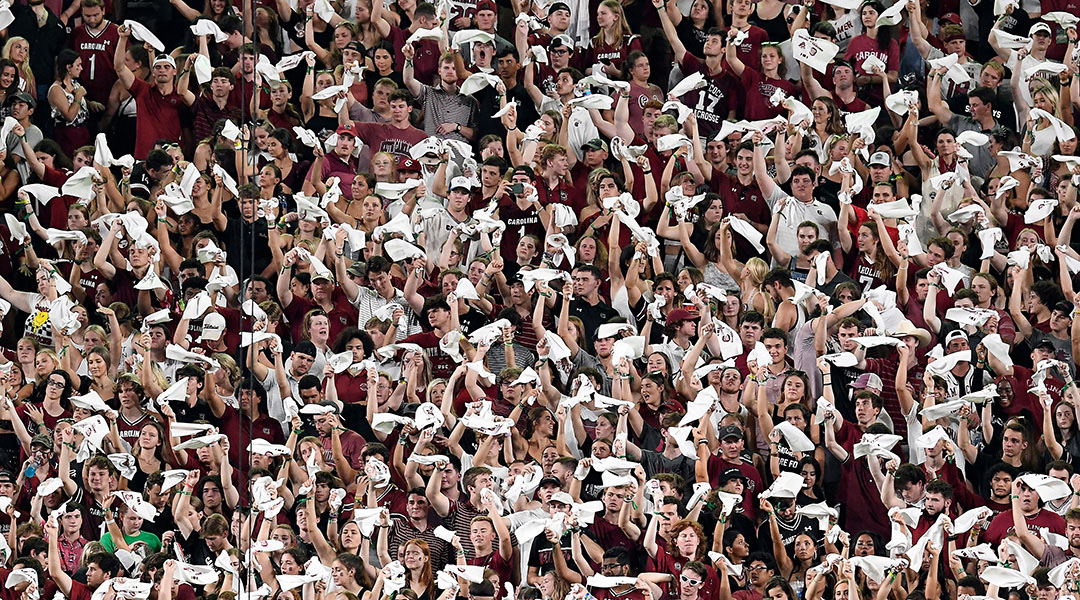 South Carolina students wave their rally towels along to Sandstorm during a football game. (Photo courtesy of South Carolina Athletics)

When Marcus Washington first saw a stadium full of fans jumping and waving rally towels while his song played in Williams-Brice, it brought him to tears.

“It’s just a great feeling, making something literally in your living room, that 80,000 people every single Saturday go nuts for,” Washington said.

Washington is referring to his remix of the song Sandstorm by Darude, a Finnish DJ. The song has played over the stadium’s loudspeakers during football games since 2009.  But in 2018, Washington gave the tradition a breath of fresh air with his “trap flip” remix of the song.

Washington found his niche in a style of dance music that combines simple melodies, heavy bass lines and hip-hop style drums that is called “festival trap.”

A broadcast journalism student at Coastal Carolina, Washington connected with and learning from other artists in the Myrtle Beach area. That helped him produce his own music, along with taking music theory classes to learn logistics of musical scales and key chord progressions.

Washington grew up with a passion for music, fueled by car rides to Temple Zion Baptist Church with his mom as a child and a short stint in his middle school band. But it wasn’t until he rekindled this passion as a college student that he started to take things seriously.

His Sandstorm remix is the culmination of his background, training and professional ambition.

Washington was in his bedroom during Christmas break of his senior year of college when he made the Sandstorm remix.

He said the memory is still “implanted” in his head.

While browsing music production software for inspiration, he stumbled upon the synthesizer used by Darude in the DJ’s original version of Sandstorm.

Washington said he then found a file that contained the four main chords to the song, allowing him to remake Sandstorm from scratch.

Then, added his own drum pattern to the song, officially giving the song a “trap flip” label.

“I pretty much remade the entire song,” Washington said. “So that’s why, like, when the drop happens for the first four beats, you hear the original. And then, I bring in my own drums.”

Washington said it took a few weeks to arrange it.

The first person Washington played the song for was his mom, Cheryl. She gave it her often-hard-to-get seal of approval.

“She was like, ‘Marcus, that’s actually kind of good,’” Washington said. “That was the first time she ever liked anything that I ever made. So I was like, OK, this might have some traction right here, man.”

Cheryl Washington laughed when asked about that story.

With mom’s positive review, Marcus Washington posted the remix to SoundCloud and Twitter.

“I uploaded a clip of me in my living room, just showing the song and playing it … I woke up to 400 likes on the tweet, and then it just caught on like wildfire,” Washington said.

Moore liked the song, too, but never expected it to blow up.

“You never know what you have until it’s like, wow, everybody else thinks it’s great, too,” Moore said. “We knew he was doing a great job. We just didn’t know everybody else would be like, ‘Man, this is freakin’ amazing.’”

Cheryl Washington said that the lore of the song soon spread to friends of her friends.

“It seemed like everywhere you would go people were talking about it,” Cheryl Washington said. “I think one of our friends worked at a hospital or something and she said people that she worked with were saying, ‘Oh yeah, we liked it!’”

The Sandstorm remix is 4 minutes and 30 seconds long. But a small, 8-second section caught the ears of South Carolina’s athletic department.

Justin King, USC’s associate athletic director for new and creative media, was sitting in his office scrolling through Twitter when he found Washington’s remix.

Plenty of Gamecock fans – including Washington – had already tagged the remix on Twitter, wanting it played in Williams-Brice on game days.

King sent the song to the marketing department.

“So, of the original, created remix, we actually use 8 seconds — it’s just like the (beat) drop part,” King said. “…We’ve got to keep Sandstorm, Sandstorm. So that drop part, I was like, that’s really good.”

King edited the audio and added a rooster crow that would transition the original song to the remix that’s played today.

King said he knew the song would be played during the game but didn’t know when. He hoped the marketing department would choose the right moment.

Late in the third quarter, Gamecock quarterback Jake Bentley connected with wide receiver Chavis Dawkins for a 33-yard touchdown to tie the game at 16 – and the remix began.

King was filming the crowd when the song played, and he said he noticed the environment change.

“It’s always kind of a sign when people are more excited – is how many towels are waving,” King said. “So I knew that was a big hit.”

The remix was played multiple times the remainder of the game, King said.

“The reaction was awesome …,” King said. “There were people who were saying honestly like Sandstorm had kind of almost become overplayed, and it kind of gave it a second life almost. And that was really, really, really cool.”

Washington witnessed the crowd’s reaction a year after everyone else did.

As a “thank you” for making the remix, he was given tickets to South Carolina’s 2019 matchup with Florida, along with some other merchandise.

For most in attendance, the game was highlighted by awful weather, controversial officiating and a South Carolina loss. But for Washington, it was surreal.

“(I was) literally just in tears, man, because I’m witnessing a song that I made on my computer being played in front of my hometown, my fan base that I love so much, so dearly, and seeing people just go crazy to it,” Washington said. “It was so much to take in. And after they stopped playing it, I sat down and soaked it all in. It was a life-changing moment.”

Moore was in the crowd with Washington that day and laughed when remembering the first time he heard the remix played over the speakers at Williams-Brice.

He said Washington tried to keep his cool leading up to the moments before the song was played, but eventually he caved and celebrated – even with some Florida fans around him.

“We’re just getting them so hyped, and eventually (Washington’s) little goofy smile started to come in,” Moore said.” “He’s like, ‘I really did it.’ And we’re like, ‘You really did it. That’s crazy!’ And now it’s just this staple in Carolina country. It’s crazy to see.”

Cheryl Washington, a USC alum, also got emotional when she heard it for the first time in person, when South Carolina played Vanderbilt last year.

“It makes you proud because you can see that he has done something that lots of people, especially 80,000 people at a time, can hear,” Cheryl Washington said.

Four years later, Marcus Washington’s Sandstorm remix has more than 100,000 plays on SoundCloud and has become a staple at USC football games.

Washington recently rebranded, changing his DJ name from MOST WANTED to Marco, a nickname he has had since he was young. He said the sound of his music has changed “waves and waves” since he produced the Sandstorm remix.

“When people go to my page and they see … a song with over 100K plays, they’ll check out the rest of my music,” Washington said. “I have others that have like 40K, like 10K, and have pretty decent numbers.”

Washington said he’s using his rebrand to come into 2023 with new music and a new sound.

“For maybe about three to four years, I was doing a harder type of (dance) music … and I just lost the love for it,” Washington said.

To find a new sound, Washington said he went back to his roots.

“I dug into my old textbooks and opened up about music theory again, chord progressions, melodic type stuff,” Washington said. “And that’s why my new stuff is more melodic.”

His ultimate goal is for his music not to be something just played to dance to, but something people can feel meaning behind. 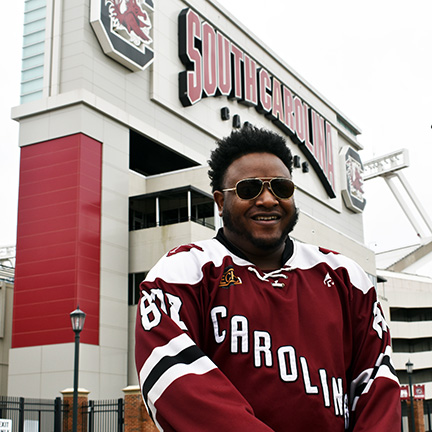 The creator of the Sandstorm remix, Marcus Washington, is a native of Irmo, South Carolina. (Photo by Michael Sauls) 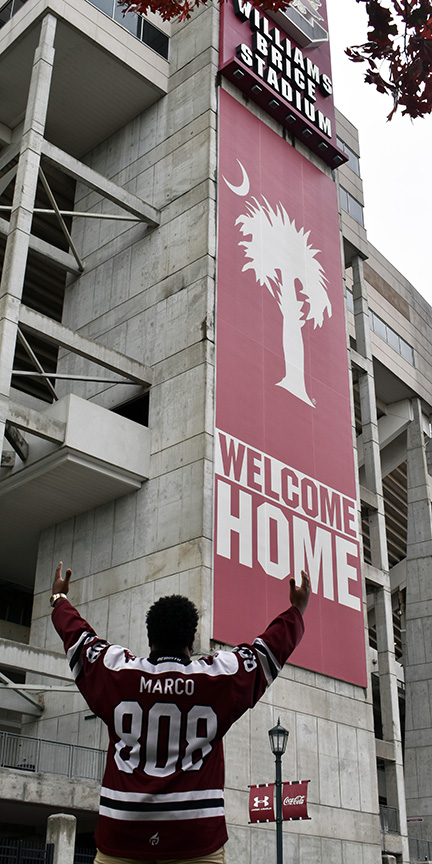 Washington recently changed his producer name from MOST WANTED to Marco. (Photo by Michael Sauls) 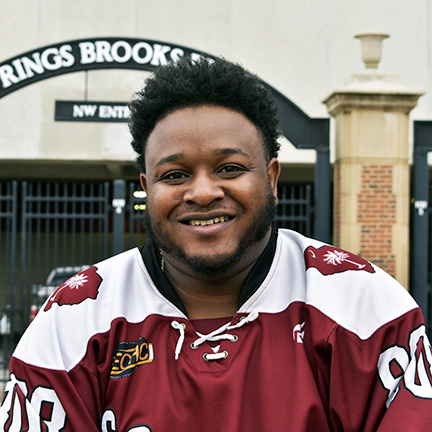 Washington attended Coastal Carolina and created the Sandstorm remix in his bedroom during Christmas break of his senior year. (Photo by Michael Sauls) 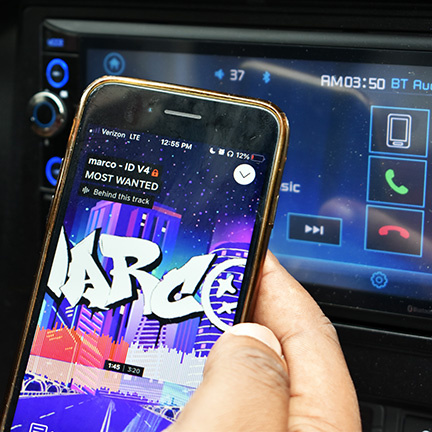 Washington previews his new music that he plans to release on SoundCloud in 2023. (Photo by Michael Sauls)

Neither Michael Sauls nor The Carolina News & Reporter own the rights to this music. No copyright is intended. The video is for educational purposes only.