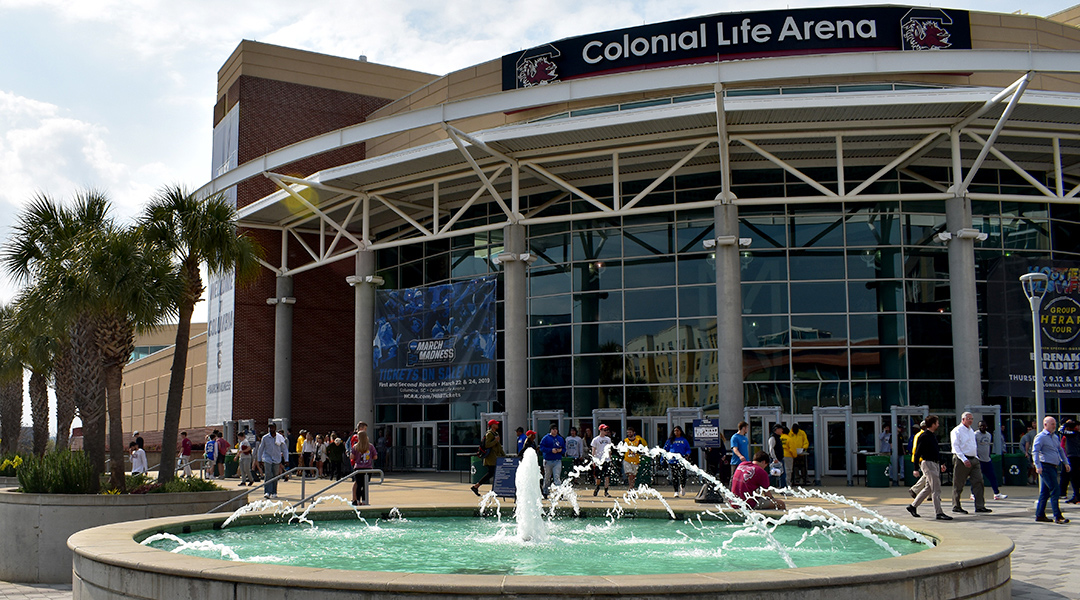 The Colonial Life arena is home to the first and second rounds of the NCAA March Madness men’s basketball tournament. Fans gathered on Thursday to watch free open practices of the teams playing in Columbia over the weekend.

Cheers rang out from inside a half-filled Colonial Life Arena Thursday as the announcer introduced Duke coach Mike Krzyzewski and his No. 1  seed Blue Devils basketball team. Although the Blue Devils are over 200 miles from home, hundreds of fans flocked to the team’s open practice to see the star-studded lineup, led by South Carolina native Zion Williamson.

“I want to see Zion play live as many times as possible, because I don’t think we’ll ever see anything like him in college basketball again,” said Lance Brown, a die-hard Duke fan who completed his undergraduate degree at the University of South Carolina and earned his master’s degree from Duke.

“I saw him one game in Cameron (stadium), two games last week at the ACC tournament and he’s in my hometown right now, so I gotta see him,” said Brown. “Me being a passionate Duke fan, I never thought I would see Duke in Columbia,” he said, adding that he has already gotten tickets for Duke’s opener against North Dakota State.

Williamson’s reputation precedes him. He made a name for himself in the Upstate at Spartanburg Day School after videos of his phenomenal athleticism and dunks went viral. His skills even caught the attention of four-time Grammy Award winning rapper Drake, who begin sporting a replica of the then-16-year-old’s high school jersey.

“To be able to see him finally play in Columbia is really good,” said Brown. “He’s still going to play on the home court of the Gamecocks, but for Duke, which I love passionately.”

The Duke star’s name may be the most recognizable at first glance, but the first two rounds of the March Madness tournament serves as a homecoming for several other South Carolina–born athletes as well.

Devontae Shuler was born and raised in Irmo. He made a name for himself at Irmo High School before graduating from Oak Hill Academy and heading to the University of Mississippi, even though he was heavily recruited by his hometown Gamecocks.

His sister, Donnella Shuler, is excited that he will play important tournament games at home.

Ole Miss heads into the tournament as an eight seed after finishing sixth in the SEC. In his second season with the Rebels, Shuler leads the team in three-point shooting percentage at .397 percent, is second on the team in assists and third in scoring.

Williamson and Shuler are not the only stars from South Carolina returning home for the tournament.

Virginia Commonwealth University, an eighth seed, is home to junior De’Riante Jenkins. He is from Eutawville, a small town in Orangeburg, with a population of about 300 according to the U.S. Census Bureau. The guard was a member of the Rams basketball team in 2017 when they reached the NCAA tournament, as well as winning this year’s regular season conference. During his freshman season in 2016-17, Jenkins was the first VCU freshman to record a double-double in almost a decade.

Gabe Bryant is a freshman center for Gardner-Webb University, a sixteenth seeded team in the tournament. Bryant graduated from Dorman High School in Spartanburg before making the move to Boiling Springs, North Carolina.

Fans showed up to Colonial Life Arena throughout the day to watch the teams practice. However, Duke drew the most fans and was undoubtedly the most popular practice session.

“I’m more of an NBA fan, but I couldn’t pass up a chance to see Zion,” said Brett Taylor, a senior at the University of South Carolina. “I think there’s a few other kids from South Carolina on teams in the tournament, too, but I think we know why most people are here,” he said.

Games tip-off this weekend as teams battle to make it through to the next round of the tournament. None of the native South Carolinians will face off in the first round of games at the Colonial Life Arena, but depending on Friday’s results, their teams could take to the court on Sunday in the second round.

Zion Williamson, wearing his Duke Number 1 jersey, steps out of the tunnel to begin practice as media and fans’ cameras turned to the freshman star. 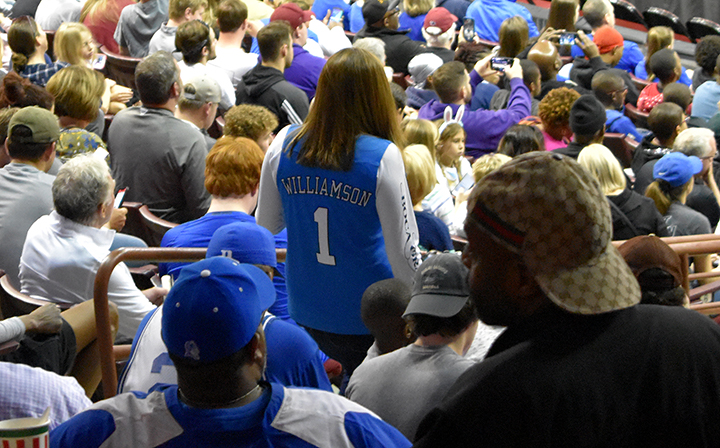 A freshman at Duke, Zion Williamson is already hugely popular with fans. In the regular season, Williamson led the team with an average of 8.9 rebounds per game while averaging 22.1 points per game. 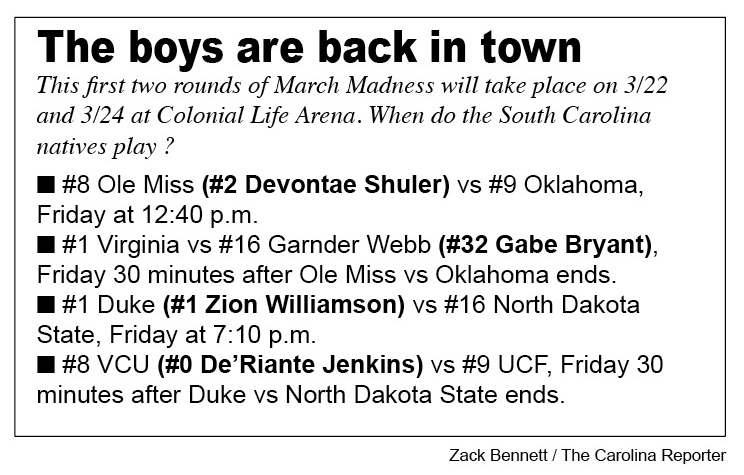