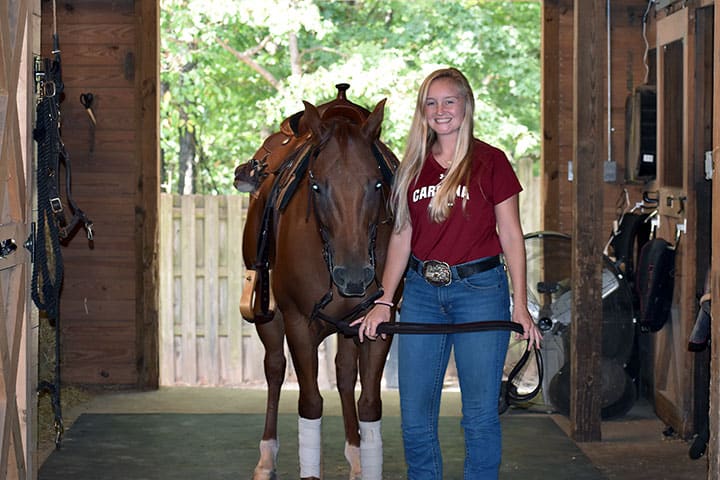 Fourth-year UofSC student Jordan Scott of Bristol, Tennessee, is a team captain and member of the western team. She finished with a 10-7 record last season, competing in reining.

As co-captains of the University of South Carolina’s equestrian team, fourth-year students Madison Sellman and Jordan Scott hold the reins to the team. Their relationship reaches beyond the horse farm, though. They are best friends.

The two met when they were paired as roommates as first-year UofSC students in 2016. They’ve been roommates ever since.

Scott, an exercise science major from Bristol, Tennessee, said she had a gut feeling the two would end up becoming friends when she scrolled through Sellman’s Instagram in the summer preceding their freshman year and the first season with the Gamecocks.

“This might be my best friend right here,” she said.

They both began riding horses from an early age.

Sellman, a biology major from Honeoye Falls, New York,  said that her mother encouraged her to start riding.

“I think that what really drives me is passion,” she said.

Scott got her first pony at the age of three.

“It’s a really long lifetime sport. I grew up on a farm, and my family raised horses,” Scott said.

The team’s leadership model is different with the best friends as co-captains, according to Scott.

In previous years, it was a good-cop bad-cop relationship. But this season, the team’s leadership is unified, according to Scott.

The captains are roommates, so the transparency should be clearer than ever before.

That unity could be key in returning something that has been missing from the Gamecocks for three years: a championship trophy.

In just 18 seasons of competition, the equestrian team is arguably the most decorated program out of the 19 sports that are sponsored by the university, winning the National Collegiate Equestrian Association title in 2005, 2007, and 2015.

Scott and Selman are responsible for managing 38 other girls on the team, a job that can be hard at times. There’s personality and drama on the team, but the group gets along. Riders spend many hours a week practicing, on top of demanding coursework. Carolina’s farm where the team practices is 20 miles from campus.

Practices, meets, and other team meetings are hosted at One Wood Farm, which is located in Blythewood, S.C.

When South Carolina hosts a home meet, it’s an even harder grind for the girls. Scott said that most riders arrive before dawn.

Some tasks to perform include banding and spraying the horse’s mane, raising flags, and hanging informational signs. After the laborious start, the fun begins. The structure of collegiate equestrian is unique and exciting. Five competitors compete head-to-head in four separate events.

“You’ve basically got twenty rounds, and whoever accumulates the most points wins the meet for their team,” said South Carolina head coach Boo Majors said.

In each competition, each rider’s horse is chosen at random. That means each selected horse is ridden twice, once by the home team and once by the away team.

“You get four minutes to figure the horse out,” Scott said.

That means that there’s a lot of strategy involved. The horses are clever as well, according to Majors. By the second ride, “the horse already knows what it’s doing and can get a little riled up,” Majors said.

Western is comprised of horsemanship and reining.

In horsemanship, the horse and rider perform a pattern of seven to nine maneuvers, which is scored on a 70-point scale.

The end goal is for the rider to demonstrate the horse’s gait, and points are taken off for poor execution. If a horse does something to detract from the uniformity of the performance in any way, such as kicking out or walking in the wrong lead, then points can be deducted.

A little bit more rough-and-tumble than horsemanship, reining is also scored on a 70-point scale.

Major said that the competition hearkens back to ranching and cattle driving from the old western days. The four movements riders perform include fast circles, slow circles, spins, and sliding stops.

In hunt seat, there’s also two events: equitation on the flat and equitation over fences.

Flats are scored on an 100-point scale, according to Sellman. Similar to horsemanship, flats includes nine boxes of maneuvers. Judges score the rider on their accuracy and the collaborative smoothness between the rider and the horse.

Equitation over fences is a jumping competition, similar to what is seen in the Olympics, said Majors. Riders are not judged on the jumps, but how well they navigate the course.

For all competitions, composure is key.

“The judge is looking for your overall smoothness,” Sellman said. Majors added that the more seamless, easy, and flowing that the ride looks, the better.

“We like to compare it to figure skating,” she said.

“Our main goal this year is to win a national championship, and I would be disappointed with anything less,” Scott said.

A member of the four-team Southeastern Conference, the Gamecocks have finished last in ultra-competitive league in the past three seasons. Since equestrian’s introduction in 2001, no other conference has won a championship.

With an overall record 7-10 in 2018, the Gamecocks still ranked 7th nationally. The result of this? Several narrow losses in league play.

“We would have a lot shinier record if we weren’t in the SEC,” Majors said.

Despite last year’s finish, the goal always remains the same for the high-riding Gamecocks, who return plenty of key riders.

“Our main goal this year is to win a national championship, and I would be disappointed with anything less,” Scott said. 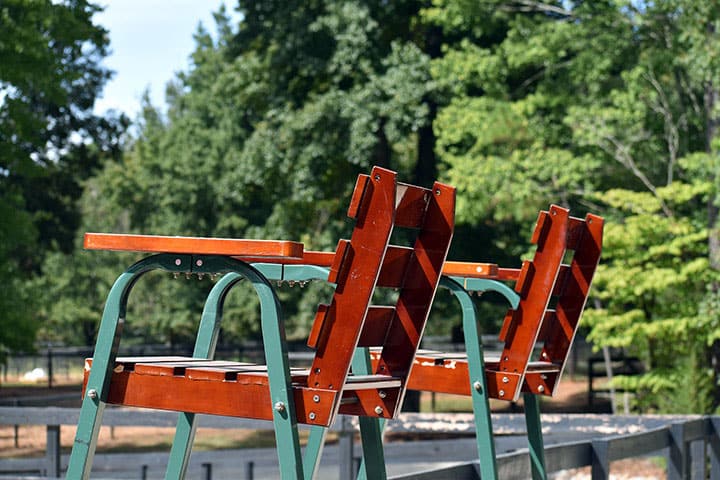 The Gamecocks have eight home meets remaining at One Wood Farm in Blythewood. 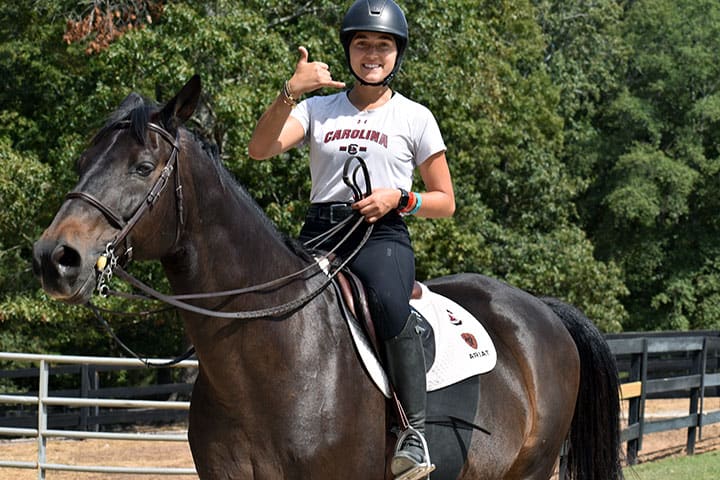 Third-year student Louisa Brackett and horse Batman celebrate the end of a long day of practice at South Carolina’s home barn at One Wood Farm in Blythewood. 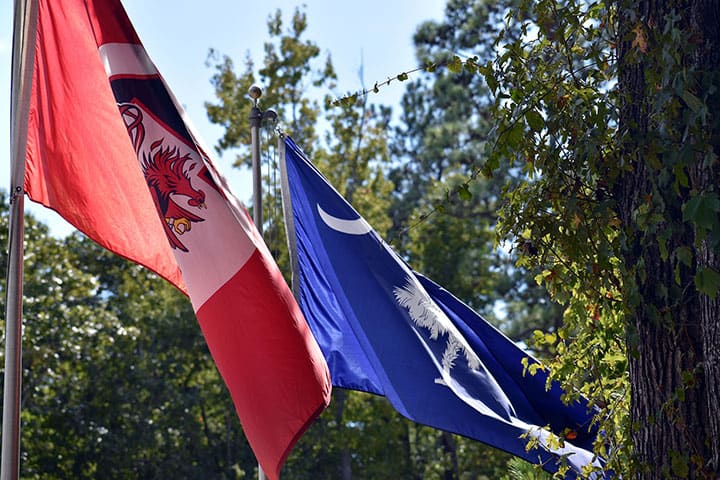 Flags fly outside of the Gamecocks western arena. Just a short walk across the farm, the program has an open-air pavilion arena that hosts hunt seat competitions. 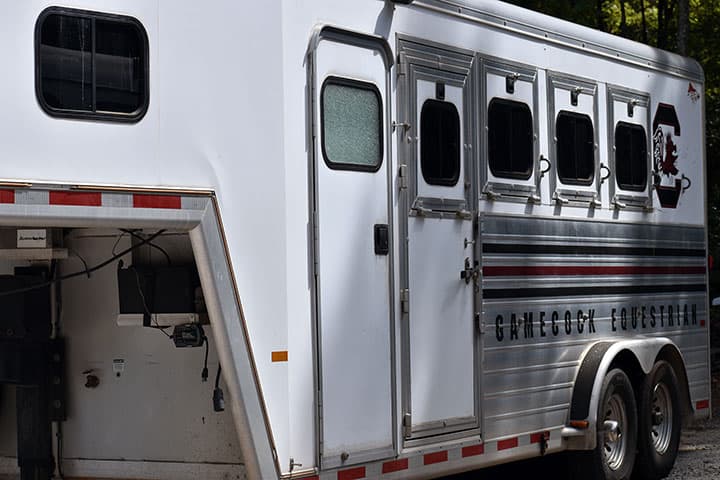 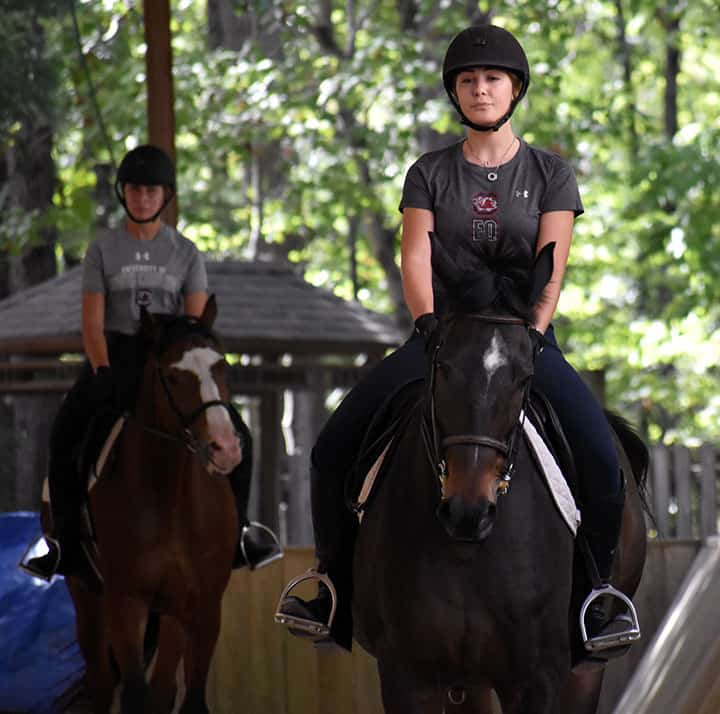 Billi Brandner, a third-year from Weston, Massachusetts, who competes in flats and fences, practices in the Gamecocks hunt seat arena. 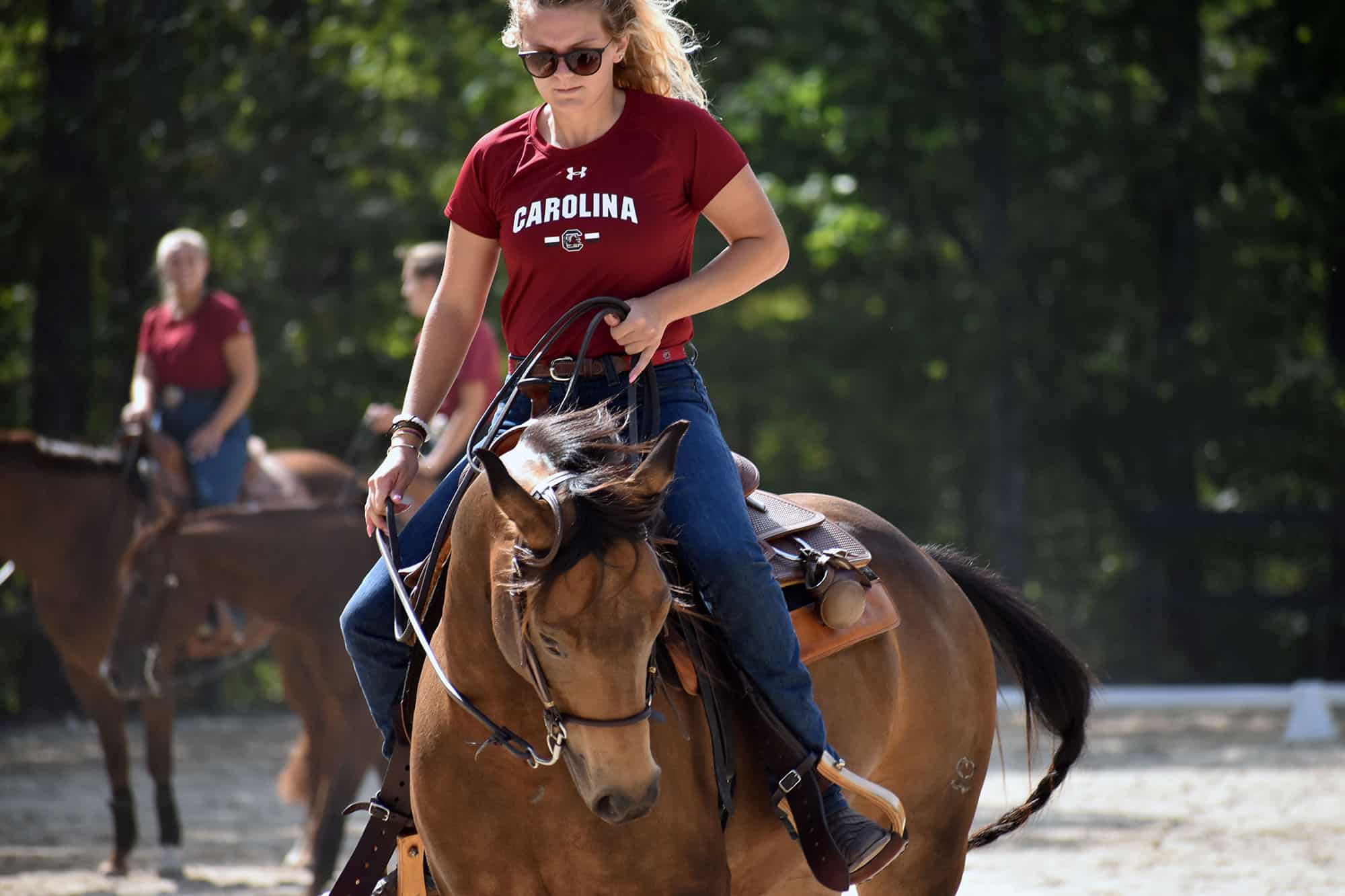 Fourth-year Carolina Gute of Dublin, Ohio, was named to the All-SEC Tournament team. 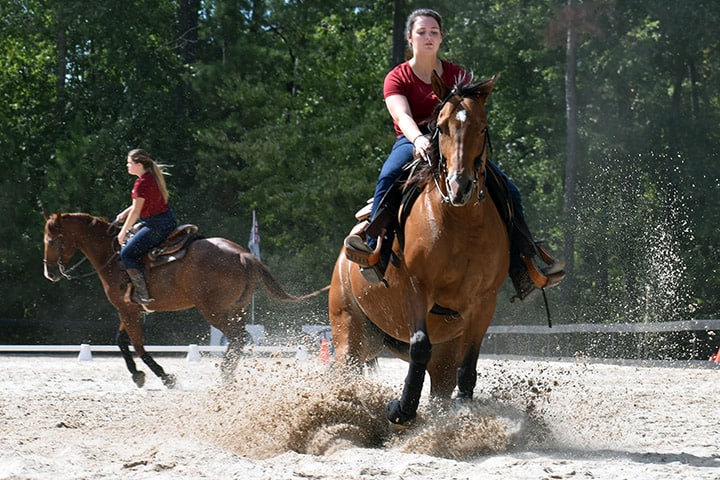 First-year rider Natalie Vargo of Plain City, Ohio, makes her best effort to control Nike during practice at their stables and training grounds in Blythewood.