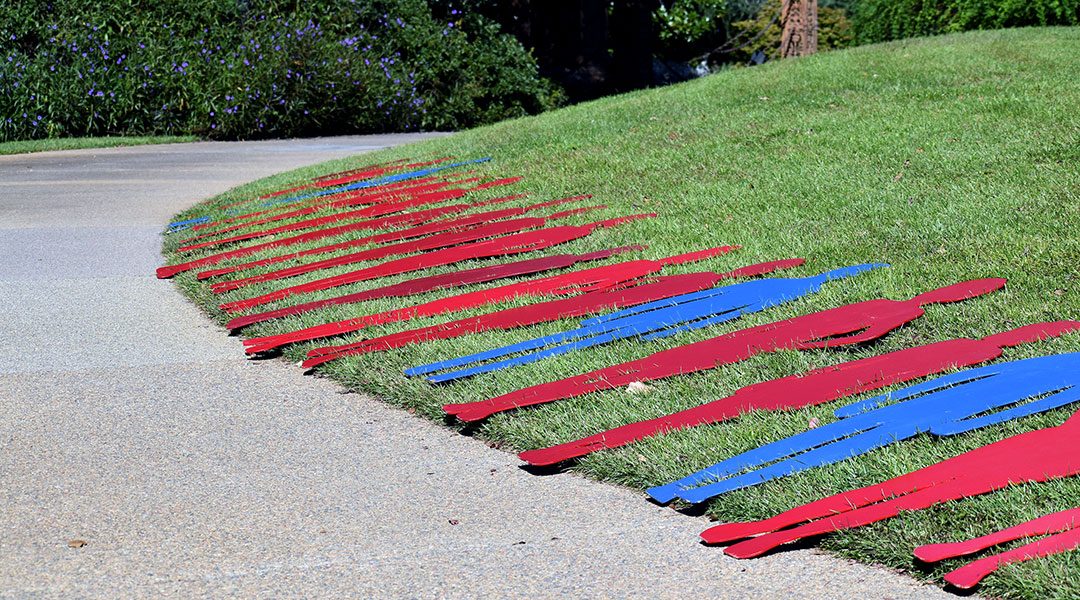 Cutouts memorialize the lives lost due to domestic violence. Volunteers laid the cutouts on the grass following the ceremony at the S.C. State House Tuesday. Photo credits: Samantha Winn.

The consequences of domestic violence in South Carolina hit home Tuesday as 43 wooden silhouettes representing victims were held up at the State Capitol at the 2020 Silent Witness ceremony.

Even though the ceremony was held virtually because of the coronavirus pandemic and streamed on Facebook, families were able to participate from their homes and mourn lives lost.

South Carolina Attorney General Alan Wilson honored each person and provided some hope, saying the state is no longer in the top 10 of states where men murder women. This is the first time in two decades the state has been outside the top 10, according to the Violence Policy Center.

“I say this with very mixed emotions because this is my 10th time (as attorney general), and almost every year we are either first or second,” Wilson said. “And so I am incredibly grateful that we are now outside of the top 10 but also still sad that there are 39 states out there who are ranked better than us.”

Forty-two men and women were killed in the state in 2019 primarily by firearms, although some were killed by blunt force trauma, arson, strangulation and stabbing. A 43rd silhouette represented unknown victims to domestic violence.

“So, we will continue to work,” Wilson continued. “I am proud of what we have done so far as a state and as a people, but we have a lot of work that remains to be done.”

Wilson acknowledged the complexity that the pandemic can have on domestic violence victims.

“This is a unique time that we are living through in this pandemic as perpetrators take advantage of social isolationism,” Wilson said. “They share misinformation with their victims and refuse to seek medical help when it is needed by the victims. They are exploiting the pandemic to continue to perpetuate this type of crime on their domestic partner.” 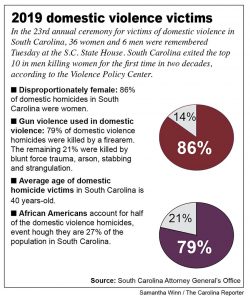 Vickie Fleming, whose sister Rhonda Fleming was killed by her ex-husband in 2003, is working to create legislation for a domestic violence registry.

“I don’t want Rhonda’s story to ever stop,” Fleming said. “I want her life to make a difference in this state. She had left her husband, and he jumped her coming out of work and killed her. It wasn’t when she was in it; she had already removed herself.” Her ex-husband later committed suicide.

Sistercare, a Columbia-based nonprofit that provides service and advocacy to survivors of domestic violence, works to provide a wide range of resources for women and their families affected by domestic violence.

“While that is a movement away from such a high number, it is still just inexcusable and intolerable,” Nancy Barton, executive director of Sistercare, said about the state’s recent drop out of the top 10.  “Really that really indicates to me that we are still in the top 20% of this country.”

Barton also indicated that the pandemic has had a negative effect on women who are victims of domestic violence.

“Initially when we all shut down in March because of the pandemic, it got quiet for about three weeks. We were receiving few crisis calls and not hearing from victims or survivors nearly as often as we typically would,” Barton said. “Once that period passed, we saw a surge in our crisis line calls, and when I studied three months this summer, May, June and July and compared it to May, June and July of 2019, we had seen an 85% increase in our crisis line calls.”

While the state has made strides in decreasing the number of domestic violence crimes, it is still pervasive and largely undetectable.

“Domestic violence affects us all,” Wilson said. “Domestic violence does not discriminate by gender, race or ethnicity. People in every socioeconomic status experience this type of violence. Domestic violence victims are all around us, in our neighborhoods, our workplaces  and our places of worship.” 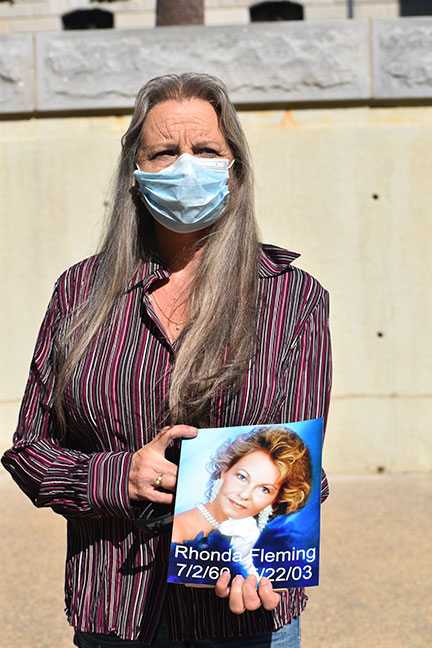 Vickie Fleming stands with a photo honoring her sister Rhonda Fleming, who was killed by her ex-husband 16 years ago. 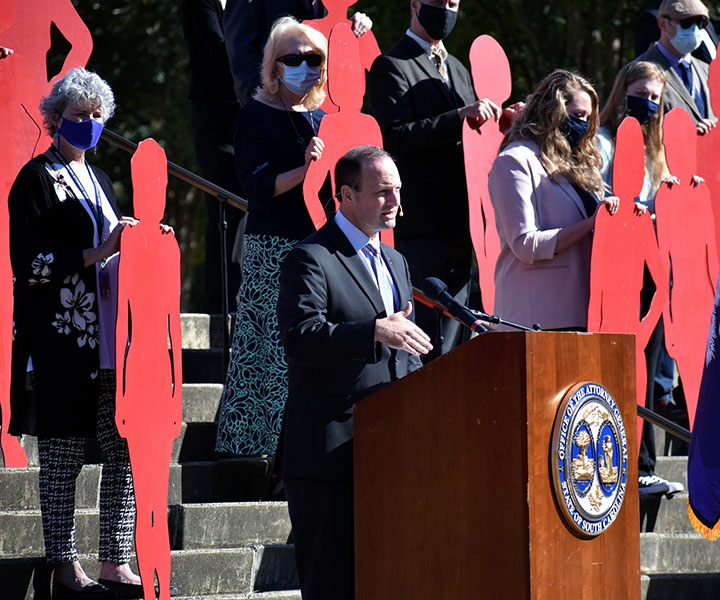 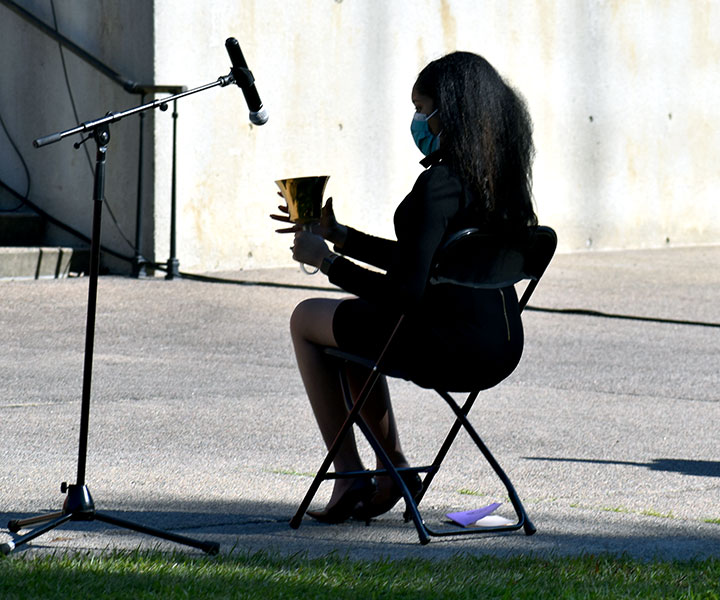 A moment of silence occurred after a bell was rang to honor each victim. 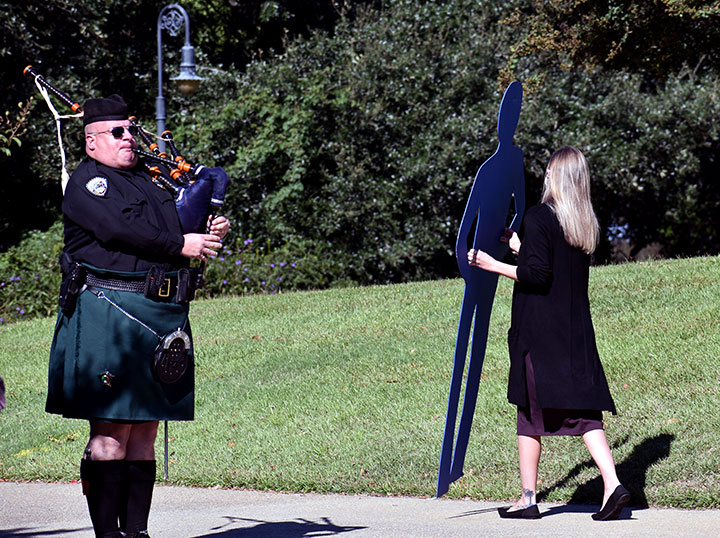