Student vote is important in 2020

One-in-10 voters in the upcoming 2020 presidential election will be a member of Generation Z, which consists of people ages 18 to 23.

For a majority of college students, the upcoming election will be the first opportunity to cast a ballot and exercise their right to vote. Given the large portion of eligible voters that are a part of that age demographic, they have the potential to make a big difference in who gets elected.

Nearly 20 million Americans attend college, which grants universities the unique opportunity to provide their students with the resources to shape the future of the country. The University of South Carolina capitalized on this by holding an event in front of the Russell House University Union building on Tuesday, National Voter Registration Day.

Hosted by UofSC’s Leadership and Service Center, the school set up QR codes that students could scan on their phones with links to register to vote, request absentee ballots, and find their local polling location.

“We believe that it is vitally important for students to be aware of how they can be civically engaged with their community as well as with the country,” said Antonia Adams. Adams, a junior at UofSC, was working the event as a member of the Civic Leadership Education Action Team.

“What we want to do is encourage students to use their voices in a positive and productive way, so that others can hear what is being said and make the change that needs to be done”.

Bennett Donovan, a first-time voter and UofSC freshman, stopped by the event to request an absentee ballot.

“I’m really happy I get to [have] the opportunity to vote now that I’m 18. I look forward to using my voice now and in the future,” he said.

However, in the past, students have not been as excited to show up on Election Day. In the 2016 presidential election, less than 50 percent of eligible 18 to 24-year-old voters cast a ballot, according to a study done by the Institute for Democracy and Higher Education at Tufts University.

Kirk Randazzo, a professor of political science at UofSC, believes that the college student vote has the potential to sway elections if the students actually show up to the polls.

“If turn out among college students was in the 60 to 70 percent range like we see for other age groups, they absolutely would’ve determined the last election,” Randazzo said.

With the current state of social unrest, a pandemic, natural disasters and more, the 2020 presidential election is one of the most important elections in America’s history. Recent polls show that voter interest is extraordinarily high. Students have the chance to make their voices heard, elect the politicians that cater to their interests and needs, and promote the change they wish to see in the country. 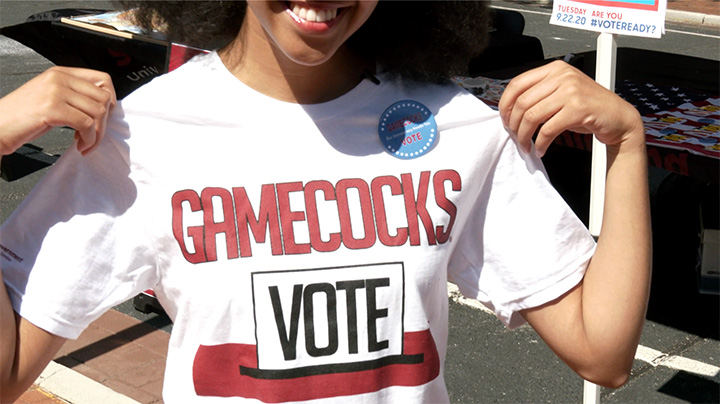 UofSC student Antonia Adams encouraging students to exercise their right to vote in the upcoming presidential election on Nov. 3. 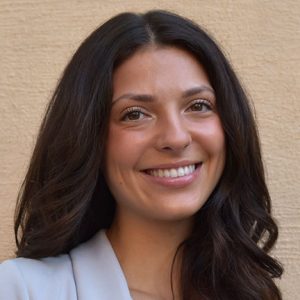 Rebecca Fair is an aspiring multimedia reporter from Rockaway, New Jersey. From an early age, she has always had a curious mind. Rebecca tries to expose herself to new people and places as often as possible, for it fuels her passion for storytelling. This summer, Rebecca hosted her own television show for pediatric patients as an intern for Seacrest Studios at Levine Children's Hospital in Charlotte, North Carolina. This opportunity allowed Rebecca to build upon her broadcasting skills, while also giving back to a cause she cares deeply about.