“Thank God a man can change:” Colleagues reflect on the legacy of Sen. Ernest Hollings 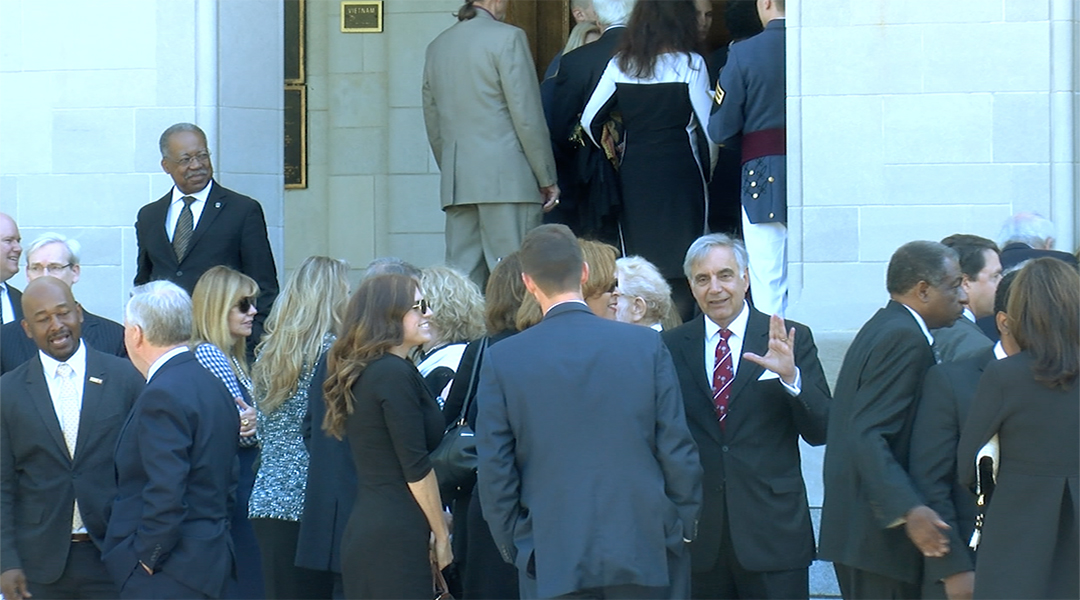 A crowd gathers outside the Summerall Chapel before Sen. Hollings’ funeral.

On a bright spring day, politicians, friends and family said their final goodbyes to Sen. Ernest “Fritz” Hollings, a man who once dominated South Carolina politics.

The funeral service for the lifelong Democrat took place on April 16 at the Summerall Chapel at The Citadel in Charleston. Hollings graduated from The Citadel in 1942.

Hollings died April 6 at the age of 97. The body of the former governor and U.S. senator lay in repose at the State House a day before the funeral. A three-day period of mourning began April 14 when family held a visitation in his hometown of Charleston.

Hollings became a mentor to Biden, the vice president recalled, and was the first person Biden called outside of his family when he won his first Senate election. Just six weeks later, Biden’s first wife and daughter died in a tragic car crash. Biden credited Hollings and his wife ‘Peatsy’ for taking him under their wings and encouraging him to still take his Senate seat despite his family loss.

“Thank God a man can change,” Clyburn said of Hollings’ transformative view on the issue of race.

Hollings initially campaigned as a segregationist when running for lieutenant governor and governor in the 1950s, but later advocated for integration at the end of his term. He cleared the way for the peaceful integration of Clemson University and other colleges and universities in 1963 when Harvey Gantt petitioned to become the first black student at the all-white institution.

Clyburn said Hollings asked that his own name be taken down from the federal courthouse in Charleston and  replaced by the late U.S. District Judge J. Waties Waring, whose dissent in a South Carolina case cleared the way for the U.S. Supreme Court’s Brown v. Board of Education ruling desegregating public schools.

Herb Hartsook, the founding director of S.C. Political Collections at the University of South Carolina, believes Hollings’ legacy will live on far after his death. Hartsook began working on Hollings’ archives in 1987 and considers himself a part of Hollings’ senior staff.

“The template that he created is one we’re still following today,” Hartsook said of Hollings’ time spent as governor of South Carolina where he actively recruited new businesses to come to the state.

“He was a product of the early 1930s-1940s South and he probably believed in segregation as a very young person,” Hartsook said. “I think he realized in the army that segregation was morally wrong.”

Hartsook believes that Hollings was waiting for the right time to advocate for equality for all. That time finally came as Hollings was leaving office.

“When he made his final address to the General Assembly he called for desegregation, and a lot of people told him not to do that and advised him to leave that alone,” Hartsook said.

Hollings ignored that advice and prepared for the integration of Clemson. He passed the duty onto his successor to fulfill the responsibility of desegregation after he addressed the General Assembly.

Hartsook says that was not the only time Hollings went against political advisors.

“You see the same kind of courage in Hollings’ famous hunger tours of 1968 and 1969, where he brought national attention to the terrible hunger that was pervasive in South Carolina,” Hartsook said.

Political elites in South Carolina thought that showcasing the hunger crisis would make the state look bad in the eyes of the rest of the nation.

Through his 38 year career in Washington, opponents tried to unseat him without success, including McMaster.

“We challenged Fritz to a drug test. He responded by saying he would take a drug test if I would take an IQ test,” McMaster said as he remembered running against Holling’s in the 1986 S.C. U.S. Senate election. 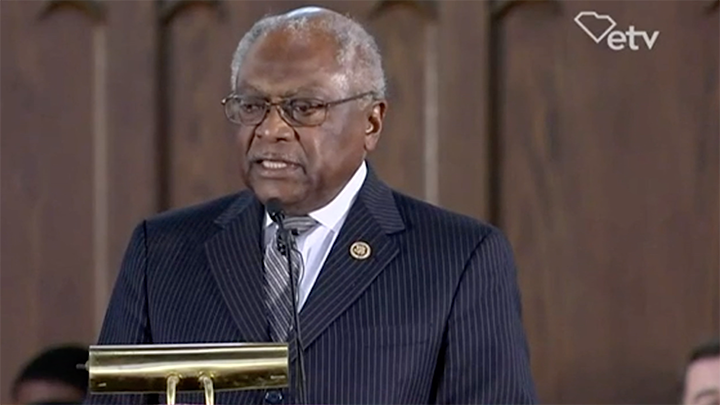 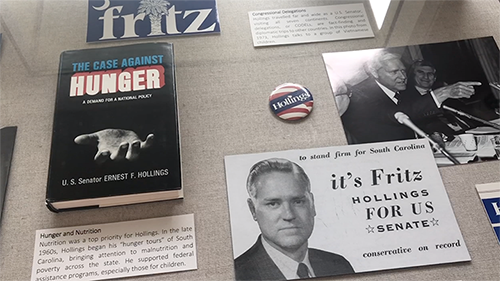 A collection of artifacts from Hollings’ career, located in the University of South Carolina Ernest F. Hollings Special Collections Library. 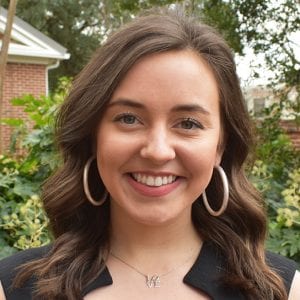 With a passion for people, Mills Hayes is eager to tell political or entertainment stories that will change lives. She previously interned at WIS-TV in Columbia, SC as a reporting intern. Hayes spent two summers in Washington, DC interning on Capitol Hill and in a public affairs firm. On campus, she served as the station manager of SGTV where she gained invaluable broadcast and management skills. She currently serves as the University of South Carolina Student Body Vice President where she works to empower women and advocate for mental health.