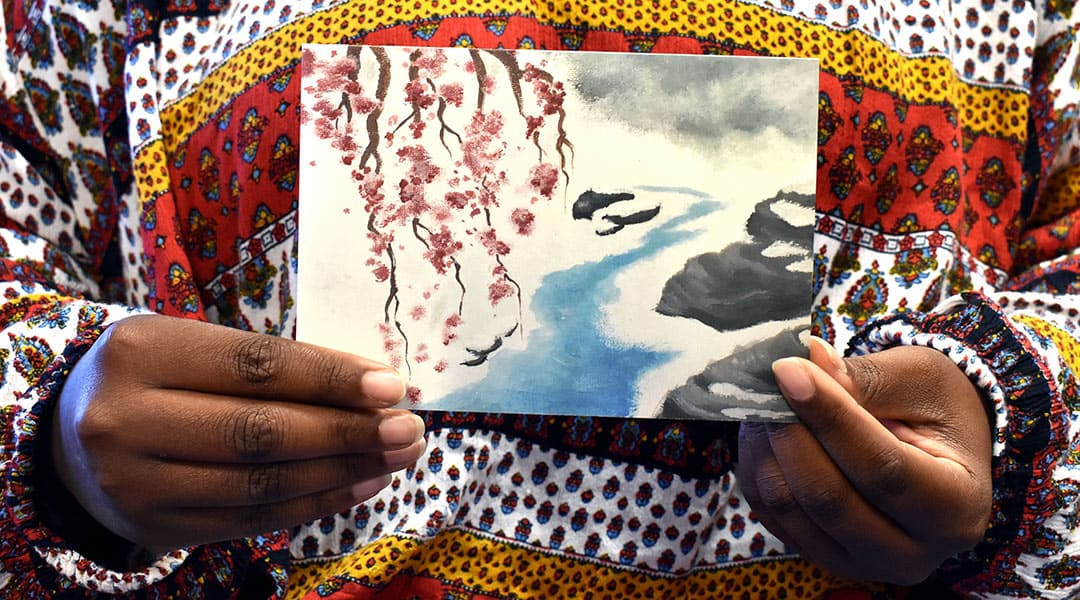 Ambience Cain is one of the current Transitions residents whose artwork is being auctioned at the organization’s annual fundraiser, Reconstructing Homes. Along with her original artwork, smaller prints will be available for purchase, too.

Ambience Cain creates art to bring her peace. Cain, a resident of Transitions, the Midlands’ largest center to aid the homeless, will have two original pieces of art on display Thursday at the Columbia Museum of Art as part of the center’s 8th annual Reconstructing Homes fundraiser.

While Cain said art is an integral part of her life, she didn’t have much time to paint before coming to Transitions. Cain is now in Transitions’ program for young adults ages 18 – 24, which offers a special curriculum and access to a case worker that helps residents with issues that are unique to their age group.

“As soon as I got here and I saw all of the painting materials, I just kind of picked it up and started trying away at it and it turned out really well,” Cain said.

She said she learned most of her technique and style from watching Bob Ross videos and tries to mimic the way he lets the paintbrush bristles create shapes on their own in fluid motions in her own work.

One of her paintings, “Sakura Blossoms,” is an acrylic painting of a pink blossom tree branching over a light blue river surrounded by soft, gray rocks.

Her other painting that is up for auction is another scene that brings her peace – a waterfall from Hawaii that reminds her of the two years she spent there.

The goal of Transitions is to aid homeless in the transition from the streets to a steady working lifestyle. The organization has a total of 260 beds for long and short term residents, making it the largest shelter in the Midlands. Transitions offers other both residential and day services, including meals, bathroom and laundry facilities, computers and job programs.

Thursday’s auction at the Columbia Museum of Art will showcase around 50 pieces of art from eight artists who are current or previous Transitions residents. Many of the artists will be attending the event to talk about their pieces and they will also receive a commission for the pieces that are sold.

Elizabeth Ingleheart, vice president of advancement who oversees fundraising efforts, said over the past four years that she has been a part of the event, it has been interesting for her to see the amount of talent that the residents have.

“I think it’s been fun for us to kind of discover some of that hidden talent and to help bring it out,” said Ingleheart.

Ingleheart said that in years past, the artwork at the fundraiser has been limited to acrylic or oil paintings on canvases. This year, there is a wider variety of art including afghan crocheted throws, hand-crafted wooden boats, painted fabric sewn into a quilt and beaded jewelry.

“Some of the art is sort of reflective of their journey and some of their experiences, but a lot of it is just really nice art,” Ingleheart said.

Ingleheart said one of the shelter’s former residents creates paintings for the event each year as a way of giving back to the organization that helped her get back on her feet.

Along with the artwork from past and current Transitions residents, the fundraiser will feature other live auction items, including signed Gamecock paraphernalia and themed baskets. There will also be live music and food catered by local restaurants including 1801 Grille, Cantina 76, Blue Marlin and others.

Reconstructing Homes is Transitions’ main fundraising event of the year. Other smaller events include Chef’s Feast, a sit-down dinner prepared by well-known chefs in the area, and a more casual sports event where groups create teams to compete in various sports games.

Since the organization is a non-profit, it relies on fundraising, federal grants and corporate and private foundation support.

“We come up with the budget and then it’s up to fundraising to bring in the money,” Ingleheart said.

Since the organization owns the building, their operating costs include funding the building, in addition to all of the other services they provide, including three meals a day for residents, laundry and bathroom facilities and temporary housing options.

While it’s one of the largest homeless rehabilitation programs in the region, it has only been around for eight years.

Events like Reconstructing Homes helps Transitions connect with the community and raise awareness about the shelter and its initiatives.

While Cain said the opportunity to have her art on display was a pleasant surprise and something she is excited about, for her, creating art is more of a hobby.

“As much as I love art, I haven’t made it a part of my main goals,” Cain said.

Cain said she can see herself in several occupations after leaving the shelter – from being a member of the military, to a cosmetic surgeon, to a real estate agent. She admits it’s a broad range of interests, but said those are all areas she is interested in pursuing.

“If I could achieve all of those, then I definitely would say that I’d be probably one the happiest people on the planet,” Cain said. 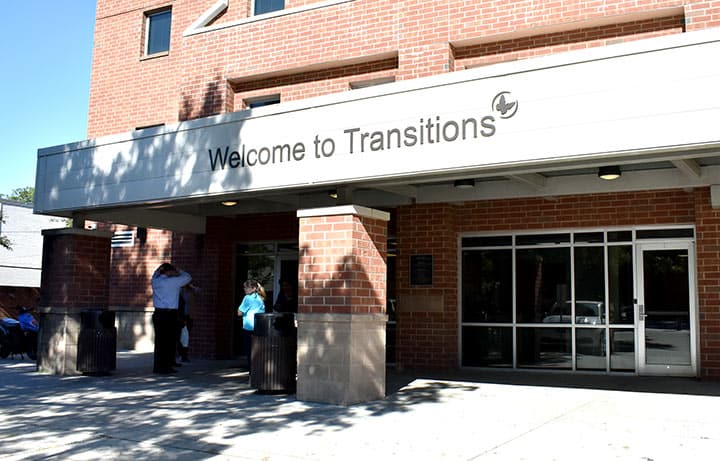 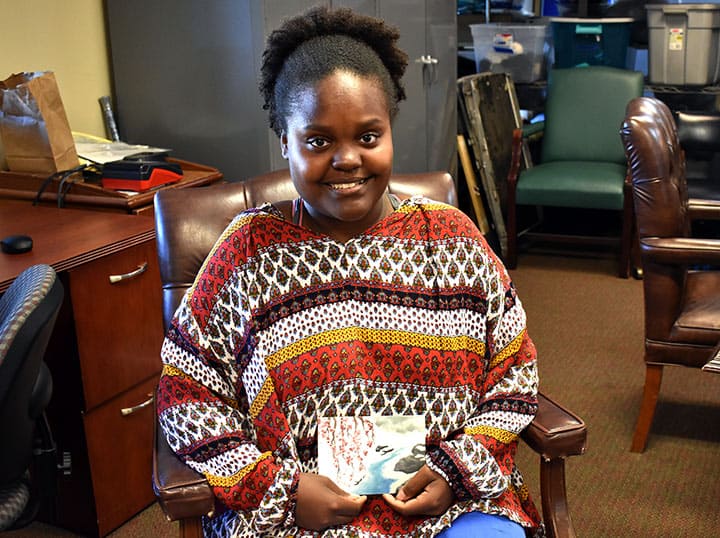 Ambience Cain has been a resident at Transitions for two months and recently discovered a passion for art after using the painting supplies that the shelter provides for residents. 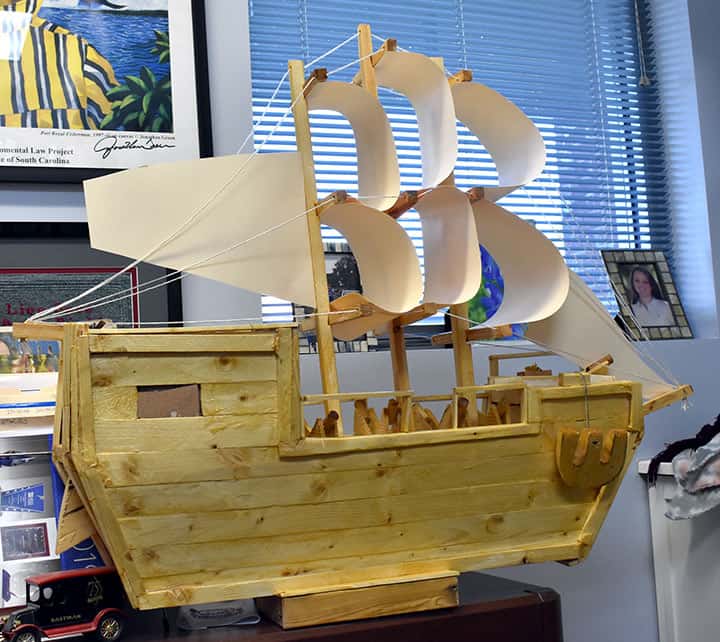 This year at the auction, there are a few 3D pieces of artwork built by residents, including two wooden ships and a Noah’s Ark replica.