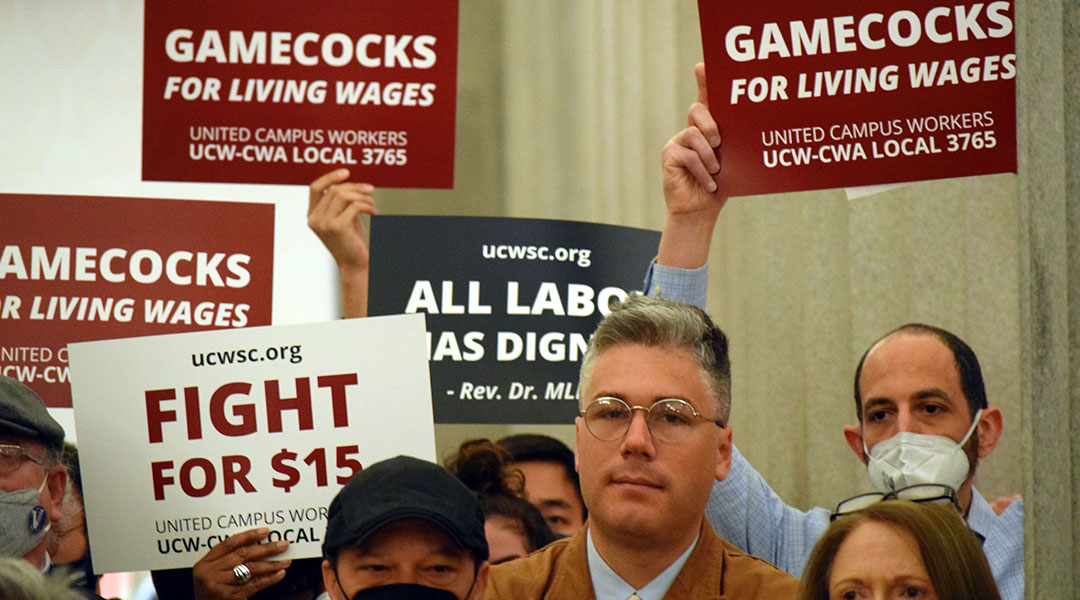 The United Campus Workers of South Carolina want to ensure that all campus workers have a livable wage so they can afford basic necessities. Photo by Téa Smith.

Bobbie Keitt has worked at the University of South Carolina in parking services as an administrative assistant for 30 years.

When Keitt was hired, she was shown a pay scale that detailed the maximum salary she could receive. After three decades at the university, she told a State House rally Tuesday, she earns nowhere near the salary she once believed she could achieve.

Keitt said she does not make enough money to retire comfortably.

“During my yearly evaluation, I have always received excellent ratings. If you are aware of evaluation classifications, based on that alone and my exceptional performance, I deserve an increase. It was never explained to me why I cannot get an increase equivalent to my job,” Keitt said.

The United Campus Workers of South Carolina — a union that fights for the rights of campus workers — were joined by elected officials and AFL-CIO labor leaders at the State House to advocate for a wage increase. They called for the university to raise the campus minimum wage to $15 an hour for full and part-time employees and a 15% increase on the base stipend for graduate students.

The wage increase would ensure that campus workers are being paid a livable wage.

The University of South Carolina recently announced that the campus minimum wage would be raised to $12 an hour for full-time employees, but the UCWSC said that is not enough.

Rep. Annie McDaniel, D-Fairfield, said campus employees are essential to the university and should be paid a livable wage.

“We may not be able to keep up with the 8% inflation rate, we can at least bring them to what some may think is a livable wage, and to them, $15 an hour would mean a lot,” she said.