USC professor Bobby Donaldson’s love for history began during his childhood in Augusta. 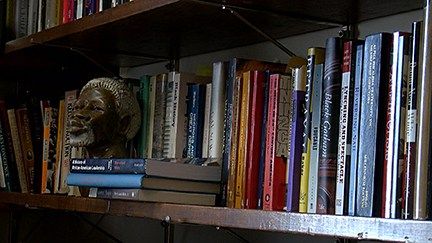 Donaldson began teaching at the University of South Carolina in 1999 and developed a passion for local history. 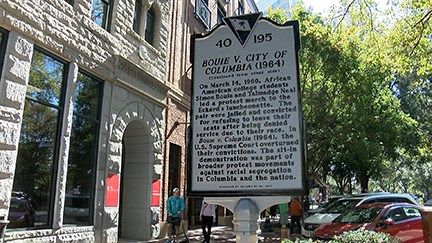 A sign marking a sit-in that happened on Main Street as a part of the civil rights movement in Columbia. Donaldson and S.C. 63 were responsible for the marker.

The award held a special significance for Donaldson, who had worked with Morrison, the late Columbia lawyer who represented, among other clients, poor rural school districts in their two-decade legal battle to obtain more equitable state funding. Morrison, a lawyer with Nelson, Mullins, Riley and Scarbough, died in 2013 at the age of 64.

“I saw up close how passionate he was about Columbia, how committed he was about improving our city, and so this award named for him is doubly meaningful to me,” Donaldson said.

Donaldson leads S.C. 63, an organization led by Columbia Mayor Steve Benjamin that attempts to document those who played a role in the civil rights movement  in Columbia. Donaldson also oversees USC’s Center for Civil Rights History and Research.

Donaldson’s love for history began during his childhood in Augusta. He grew up in public housing, and the elderly members of the community would take care of the children while the younger parents worked. He considers his grandmother his first history teacher.

“As a little kid I would listen to stories, and I was fascinated by them,” Donaldson said.

He arrived at the University of South Carolina to teach in 1999 but had no idea he would become so involved in local history research. However, this transition to researching grew from his experiences as a professor.

“I always wanted and always try to include primary resources assignments and activities in my courses to bring history to life and to show students how history is created,” Donaldson said. “So we’ve taken on very small projects to begin to delve more deeply into historical records.”

In the process of projects like S.C. 63, Donaldson has brought stories from the civil rights movement back into the consciousness of the city. One of these is the story of Sara Mae Flemming. At 19, Flemming was accosted on a city bus in downtown Columbia after taking a seat in what she believed was the beginning of the segregated black seating. She sued the bus company, more than a year before Rosa Parks refused to give up her seat on a Montgomery, Ala., bus and ignited a movement to end segregation on public transportation.

In 2013, Donaldson and S.C. 63 dedicated a marker to Flemming on Main Street to remind Columbia of what Flemming did for civil rights in the city. Donaldson will receive the award at a ceremony at Booker T. Washington Auditorium on Nov. 17.