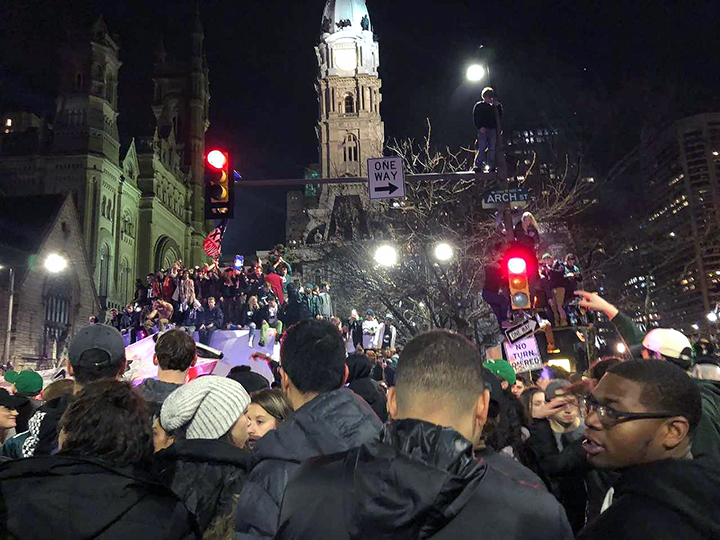 Philadelphia Eagles fans celebrated in the streets after their team’s Super Bowl win over the New England Patriots.

Philadelphia Eagles fans erupted in celebration as they marched down the city’s Broad Street following the Eagles’ 41-33 win in Sunday’s Super Bowl LII over the New England Patriots.

For years, Philadelphia fans have been tormented by the Eagles’ Super Bowl drought, but this win changed everything for them and brought out a myriad of emotions.

“I felt pure shock and excitement,” said Jeff Mills, a 22-year-old Temple University student. “It actually happened when everyone doubted us.” Most people wrote the Eagles off in the playoffs because of some player injuries, but this team embraced an underdog mentality.

Mills said he was overcome with nerves on the Patriots’ last drive. Patriots’ quarterback Tom Brady was marching down the field at the end of the fourth quarter, and Eagles fans were nervous because they were familiar with what he has done before. Then the clock ran out as Brady’s last chance Hail Mary pass was batted away.

Following the play, a mob of Eagles fans stormed the streets of Philadelphia to celebrate. Fans marched in pure bliss as they all congregated by City Hall in the heart of the city.

“The march down Broad Street was unreal, and the City of Brotherly Love was just that,” said Paul Arizin, a 22-year-old West Chester University student. “I just took everything in because it felt like a dream.”

“Everybody was getting along, there were no fights that I saw,” Mills said.  He said that there was no hate, just pure happiness. The massive celebration showed how much the win meant to fans that have waited their entire lives for a victory.

“I feel as if the chains are unshackled,” Arizin said. “Many people don’t understand how the Eagles are the central bonding point in many relationships.”

Some fans had family who had never got the chance to see their Eagles win.

“I was emotional when I saw a friend of mine thank his dad who passed away and would never get to share it with him,” said Arizin.

Dave Moerman, a 23-year-old Bloomsburg University student, said he was happy for his family after the game.

“The older generations’ fulfillment now after almost doing it 15 years ago is pretty amazing,” he said. Moerman says he couldn’t imagine the pain his dad had to go through watching his team disappoint year after year.

Moerman said he feels lucky that he was able to see this win in his lifetime and celebrate it with his family.