“Justice for All” provides intimate glimpse into S.C. civil rights 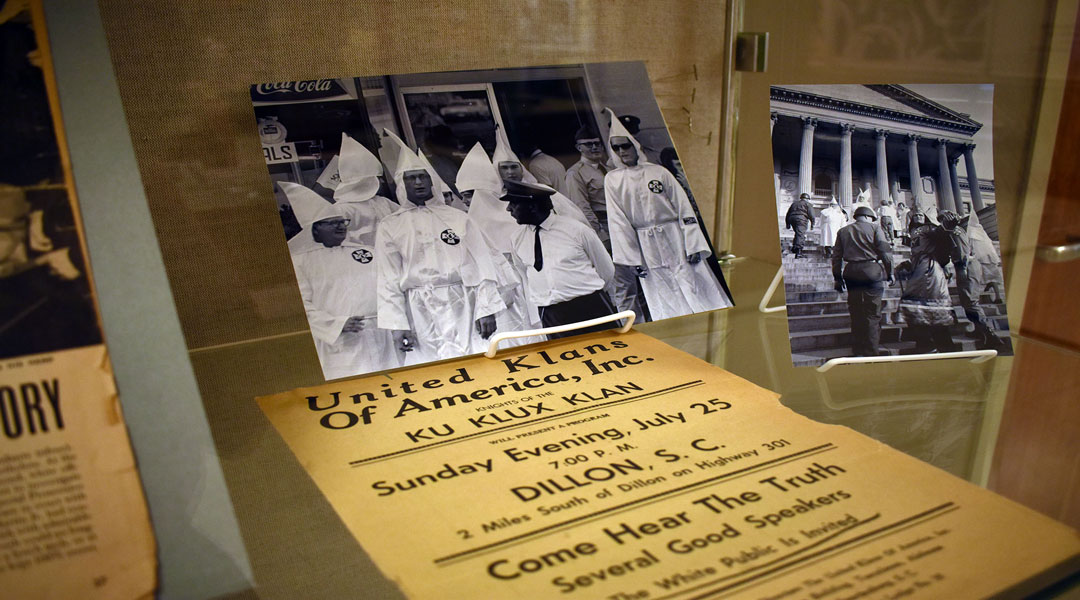 A program for an event hosted by the Knights of the Ku Klux Klan in Dillon is on display at a new University of South Carolina exhibition.

It’s only a small brass colored token, slightly larger than a nickel, but it has come to symbolize the story of an unsung civil rights hero in South Carolina.

On June 22, 1954, Sarah Mae Flemming would have used one of these tokens to board a segregated bus in Columbia. After taking her seat, Flemming was harassed and humiliated by a white bus driver who accused her of sitting in the “whites-only” section. Flemming filed a lawsuit that eventually overturned segregation on city buses.

Her defiant act occurred seventeen months prior to Rosa Parks’ refusal to give up her seat on a Montgomery bus, sparking the Montgomery bus boycott. Flemming’s story, like that of many other South Carolina civil rights leaders, is often overlooked. A new immersive civil rights exhibition opening Thursday at the University of South Carolina seeks to bring those stories to light.

“This story is one that resonates with me because it is one of those stories that we want to keep talking about,” said Bobby Donaldson, a history professor and the director of the Center for Civil Rights History and Research. “Here is a 19-year-old woman that challenged segregation in the city buses and filed a lawsuit against one of the most powerful companies – SCE&G,” Donaldson said.

“Justice for All: South Carolina and the American Civil Rights Movement” features everything from bus tokens to comic books.

The exhibition, located in the Ernest F. Hollings Special Collections Library, features an assortment of items dating as far back as Reconstruction, but the majority of the collection is focused on items from the 1960s era. In addition to traditional artifacts like newspaper clippings and photographs, “Justice for All” houses a variety of unexpected pieces, ranging from a video of Martin Luther King Jr.’s speech in Kingstree to a program for an event hosted by the United Klans of America, Inc. in Dillon.

“What we’ve tried to do is tell the South Carolina story and integrate it into what happened around the country,” Donaldson said.

The exhibition also includes pieces that epitomize the fierce opposition many of these individuals faced, like telegrams sent from the Grand Wizard of the Ku Klux Klan to South Carolina Gov. Robert McNair.

Donaldson said that a project of this nature has “been in his head for years,” and he hopes that the exhibition will educate a broader population on the work of activists in South Carolina.

“I’m hoping that this will bring people across that bridge,” Donaldson said, referring to the bridge connecting the main floor of the Thomas Cooper Library to the Ernest F. Hollings Special Collection Library.

“Justice for All” is a collaboration among USC’s Center for Civil Rights History and Research, University Libraries and the College of Arts and Sciences. The exhibition will open on Thursday at 6:30 p.m. with a free public event featuring an address by Cleveland Sellers Jr., a veteran civil rights activist and former Director of the USC African American Studies Program. It will be on display through Aug. 2.

“We tried to be as comprehensive as we could in the space we have, so I always tell people this is really a snapshot of the history – there’s much more that could be uncovered,” Donaldson said. 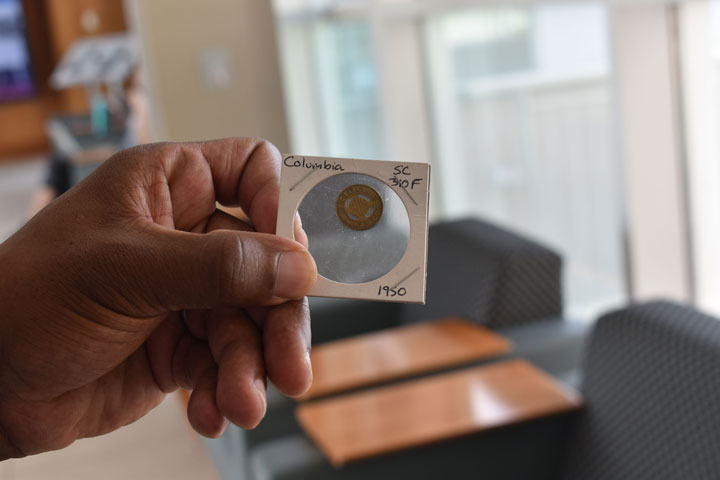 Bobby Donaldson, the director of the Center for Civil Rights History and Research at the University of South Carolina, holds a token that would have been used to board segregated city buses in 1954. 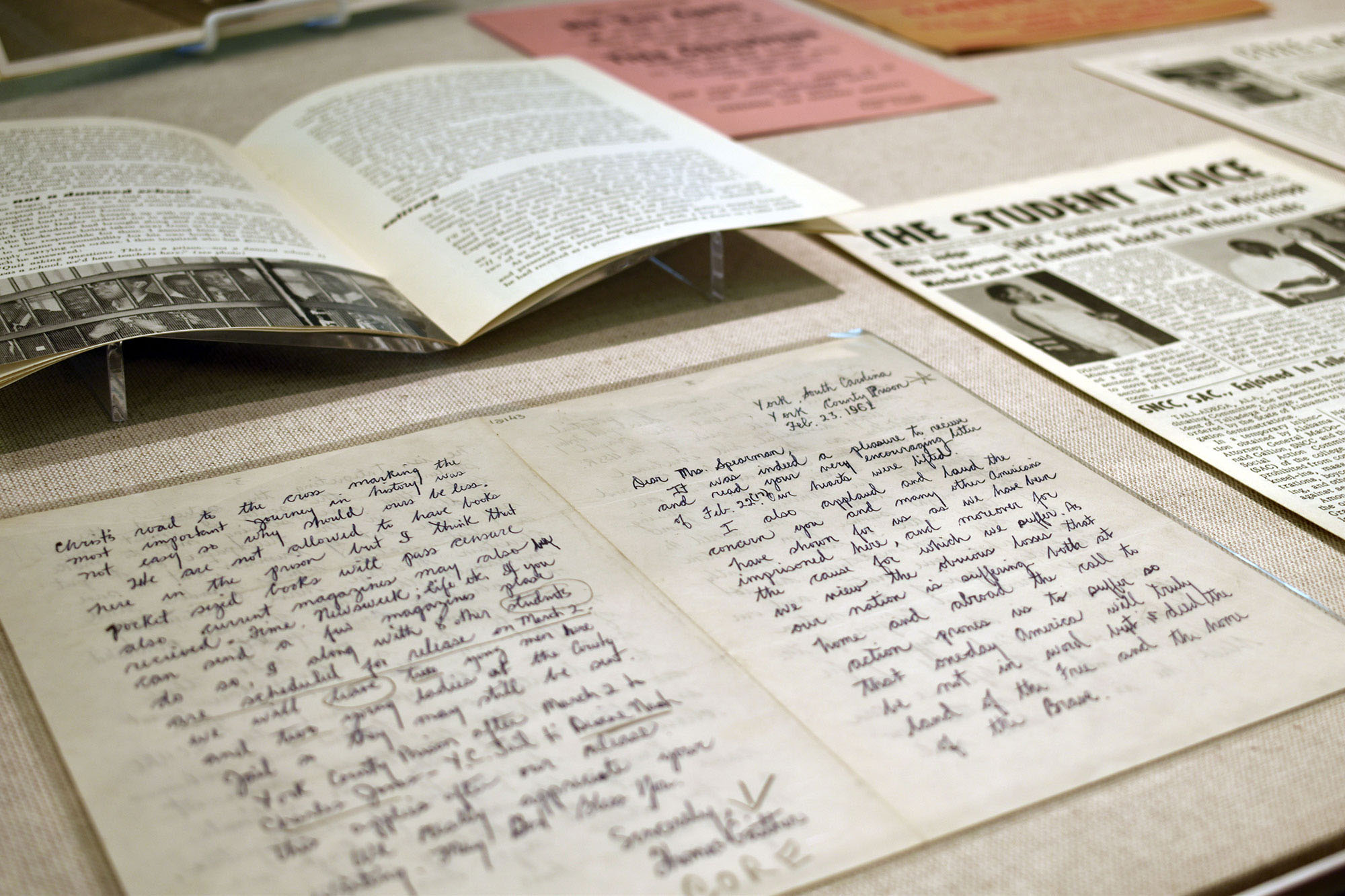 A letter written from the York County jail by Thomas Gaither, who was arrested for a peaceful sit-in at a Rock Hill lunch counter. 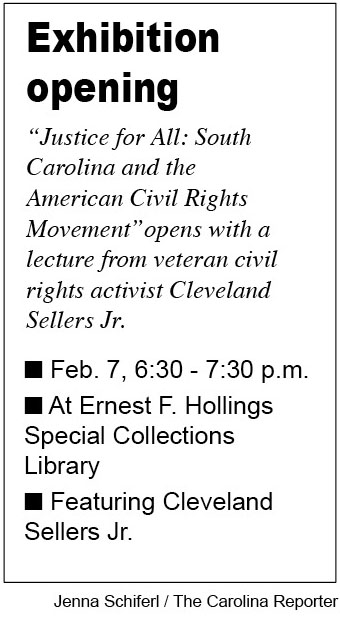