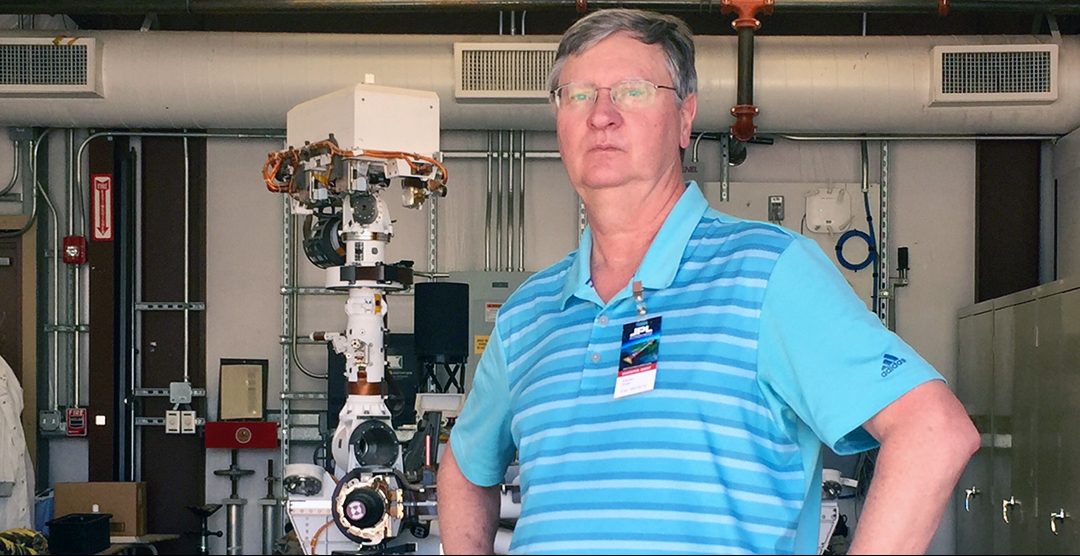 Stanley M. Angel, a UofSC professor is shown at JPL (Jet Propulsion Laboratory) in Pasadena, Calif. He’s standing next to an exact replica of the Curiosity Rover that helps work out issues on Earth, to support Curiosity on Mars. Photo courtesy: Stanley M. Angel

A world of possibilities is just 127.45 million miles away, and the anticipation for Thursday’s landing of NASA’s new robotic rover is sweeping the nation.

About half of Mars exploration rovers fail, but NASA and its team of engineers, mega physicists, chemists and a wide array of other disciplines working on the mission erupted with cheers when the Perseverance rover landed shortly after 4 p.m. Thursday. It was launched on July 30, 2020.

The data the rover picks up will be downloaded and sent back to Earth and immediately identified to see what kind of minerals and rocks they are.

“A typical morning on Mars starts out with the science team, whoever’s on the shift would log in to a variety of different web resources, communication resources, imaging resources, different types of ways to look at the data,” said Stanley M. Angel, a professor in the department of chemistry and biochemistry at the University of South Carolina.

In the first hour, the data is gathered so that everybody on the team has access to it. Angel said that the mission is to look for signs of past or present life on Mars and retrieve those trace samples.

“That data is downloaded, and very quickly, you kind of generate the summary of what the data from the previous day includes,” said Angel. “Looking at this data we say, you know, there’s a region over here that looks very interesting let’s look at that more closely tomorrow.”

Angel said that “time is precious on the rover,” so the satellites in orbit around Mars, will communicate with the rover and relay the signal of all the gathered data back to Earth.

Angel said he developed a variety of techniques over the years as a spectroscopist and that the tools he developed are finally being used on planetary missions like the Mars 2020 Perseverance rover. But not without some help along the way.

“My students are responsible for doing in all the work that’s led to these remote laser analysis techniques,” said Angel. “Now, 30 years ago, students were involved in developing the tools that are being used on this rover, and on the “Curiosity” which landed you know … well many years ago [2011].”

Angel took part in the design and concept of the “mast” part of the rover.

“You know when you see a picture of the rover there’s a big mast up on top of it, big white mast, like, hiding away above everything else? That’s SuperCam. That’s the instrument I’m mostly involved in,” said Angel. “That has a laser on it, as part of it, and that laser is used to make remote measurements — chemistry measurements — of the rocks up to 10 meters away from the rover in any direction and is able to do three types of laser analysis.”

The rover carries about 20 containers that will store samples and then put into a cache on Mars. Later, NASA will send another mission back to retrieve the samples and bring them back to Earth for a more detailed analysis.

The Perseverance mission has the potential of answering the question, “Is there life, anywhere else than on the Earth?” Angel said the goal is to find chemical indicators and any types of carbon and microfossils that could help indicate the possibility of life on Mars.

“So, if you want to search for life on Mars or any other planet, what do you do? Well, the only thing we know to do is look for where there was water,” said Angel. “The team has selected a crater on Mars called Jezero. A couple of billion years ago, it was filled with water. It was a lake, about the size of Lake Tahoe in California.”

The instruments on the rover are used to find “trace evidence” in rocks on the crater.

Chemical and biochemical students at USC are excited to hear that a Professor from their college took part in this “crazy” opportunity.

“I think I saw the video UofSC posted about him. And I’ve talked to people about it,” said Christian Ryan, a first-year biochemical student at USC. “They said it was pretty crazy that he was working with NASA and that they didn’t expect someone from USC to do something like that.”

Angel encourages students of any and all disciplines to join the space program.

“Now’s the time to get involved. Sure, it’s really the golden age of space exploration. There’s no other time like this, there’s some really exciting missions coming up. So, get involved.” 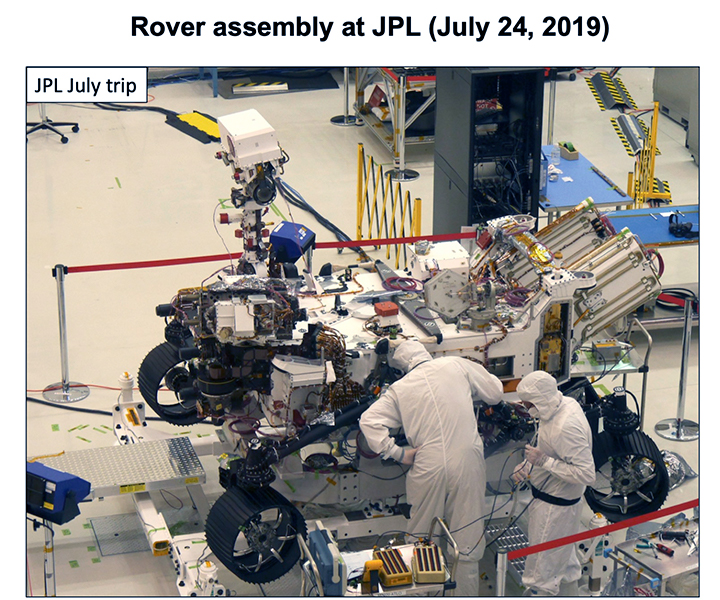 The Mars 2020 Perseverance Rover was built at the Jet Propulsion Laboratory in California. The rover is projected to cost $2.7 billion for its 2-year primary mission. 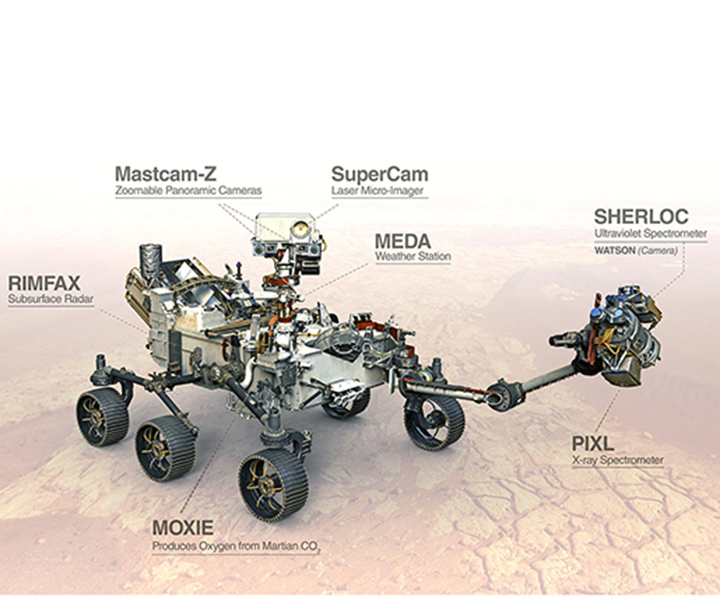 Perseverance has seven instruments and five of them are explicitly designed to look for traces of life or “martian geology.” Photo courtesy: NASA 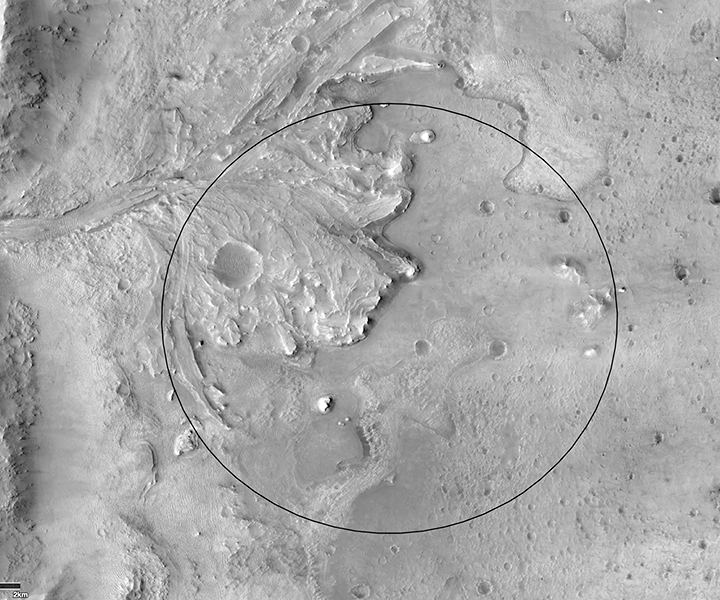 The Mars orbiter showing the landing ellipse, a black circle, where the rover landed on 4 p.m. Thursday. At the left of the picture, is a former river channel going into a former lake. Photo courtesy: Ryan Anderson, USGS